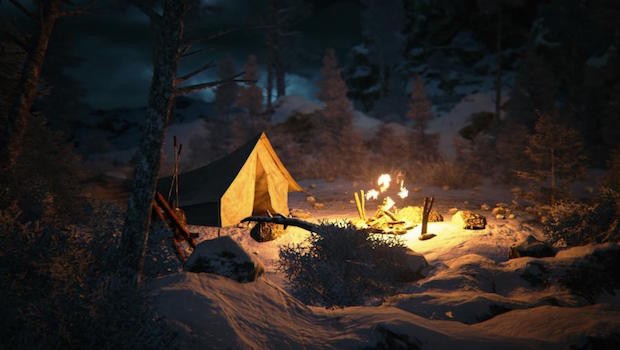 I’ve spent a fair amount of time in video games wandering around aimlessly. Sometimes the aimlessness is due to being stuck on a puzzle and retreading ground in a desperate search for clues, other times it’s because I can’t figure out where the hell I’m supposed to go. KHOLAT is the latter case, despite its feeble offering of a map and compass that do more to confound than help.  I mean, really, the compass doesn’t even have north, east, south, and west marks on it. The lack of intuitive navigation is where most of my heartburn with this game begins and ends.

I had high hopes going into KHOLAT, it’s based on a true story about a group of people in Russia who went hiking on a snowy mountain and ended up all dead in a mysterious fashion. And it appeared to take inspiration from Dear Esther, a game I love. The atmosphere is genuinely creepy and brooding… it makes me wonder what those hikers were thinking in the first place, actually. The effects of being on a snowy mountain during high winds are faithfully recreated as the trees sway heavily, your visibility is diminished, and the constant whistle of wind pressure rings in your ears. When something significant in the narrative happens, you’re treated with musical chords that fill you with dread.

The gameplay takes a minimalist approach in that there is no combat or platforming to speak of.  At your disposal are a flashlight, a compass, a map, and the ability to run. The vast majority of the experience is you walking around the snowy mountain, occasionally finding notes written by the hikers that provide information, and sections where you have to avoid enemies.

Speaking of enemies, they are another point of contention for me in KHOLAT. As I mentioned, the game is based on a true story, yet it’s filled with supernatural beings that patrol the mountain, seemingly in search of more hapless hikers. You’ll have to avoid these beings because if you’re spotted, you’re dead unless you can escape quickly enough. This supernatural element basically eliminates any sort of credence the story has from being based on real events. This created a narrative dissonance for me that I was never able to reconcile, defeating any curiosity I had about what may have happened to the hikers.

Once I lost interest in the story the shortcomings of the gameplay became more apparent. I was marching around a maze of snow and rock without much to keep me engaged. You’ll come upon landmarks like a dilapidated old church and cemetery long since devoid of visitors, and the souls of the hikers, represented as fiery beings, will occasionally reveal themselves. But in the end the frustration of feeling lost and directionless is what I walked away from the experience with.

Before going into KHOLAT I was intrigued with the premise, I love the idea of playing a game based on a true unsolved mystery. Unfortunately, the developer’s ambitions for putting the player in the shoes of someone experiencing that mystery first-hand are muddled by the need to embellish the events with a supernatural element. Additionally, while I’m not exactly a proponent of linear gameplay, I would have greatly appreciated more direction.

KHOLAT nails the experience of being atop a snowy mountain during volatile conditions, and the idea of it being based on a true story is intriguing. Ultimately, though, the execution falls short and you’re left with a shallow experience that is hard to find the fun in.