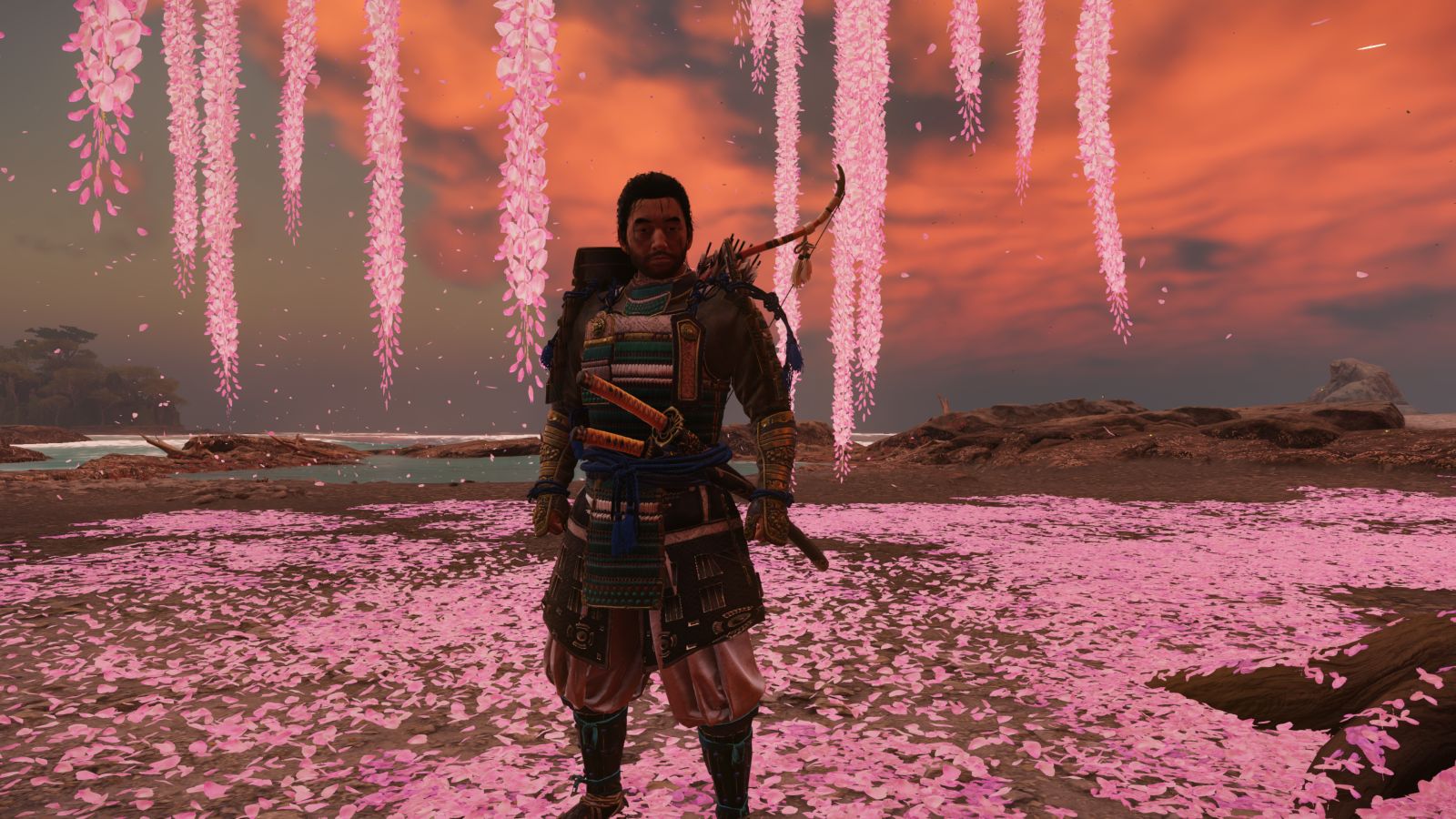 The tale of Iki island is one borne of blood and conflict. Clan Sakai had attempted to put down rebellion on the small island, slaughtering many of its inhabitants wholesale and making enemies of those who remained. Jin’s father had once built a stronghold here, but after his death, the samurai of Tsushima pulled back from the conflict. When Jin encounters a new type of Mongol in the field, a shaman capable of driving his comrades into a frenzy, he realizes that this threat cannot be allowed to spread to the rest of Tsushima. Resolved, he sets sail for Iki Island, but what he encounters there is far worse than he could have ever imagined.

Below you will find the first 20 minutes of the Iki Island expansion. It will contain spoilers that set up the inciting event for the rest of the 20 or so hours it’ll take you to complete this stellar expansion that Sucker Punch has created. I’m going to refrain from spoilers as much as possible, so if you want to go in completely blind, you’ll want to skip the video below.

Jin’s new foe, the Eagle, is a shaman herself. With Jin momentarily at her mercy, she forces a hallucinogenic on him to “open his mind”. Unfortunately for Jin, it opens his mind to all manner of intrusive thoughts, troubling flashes of pain, and nefarious insight. Echoes and whispers come from the DualSense, as well as your speakers, making for a really cool effect when Jin suffers from a hallucination or disturbance.

On par with the amazing work Housemarque did with the DualSense in Returnal, Sucker Punch has gone all out with the tactile and auditory goodies for Tales of Iki. The wind whistles through your controller speaker, rain speckles, and your horses hooves provide an auditory and tactile sensation. The hard clang of steel on steel feels even more visceral than before, but nothing beats sheathing your katana and hearing the hard horn of the koiguchi (the part where the sword enters the saya, or scabbard) makes contact with the habaki, tsuba and seppa (the steel side plates, round crossguard portion, and spacers) with a satisfying knock. It gave me just one more reason to perform a chiburi (the ritual flick of the katana to rid it of any blood) to sheath the blade.

Once you reach Act II of the main game you’ll be able to select the Iki Island content. I am going to recommend that you have a bit of restraint, until you’ve obtained a bit of health, and at least the Wind stance since several of the new foes will be using polearms. Without that stance you’ll have a very rough go of it, with new foes able to obliterate you nearly instantly.

Iki island has you still facing the Mongol horde, but The Eagle’s army brings new foes. One fighter wields a crescent moon spade to devastating effect, and another that freely switches between paired scimitars, sword and shield, and polearm, forcing constant stance switching. These foes are all absolutely deadly, often pairing speed and area of effect attacks with overwhelming power, but none are more insidious than the Shaman. 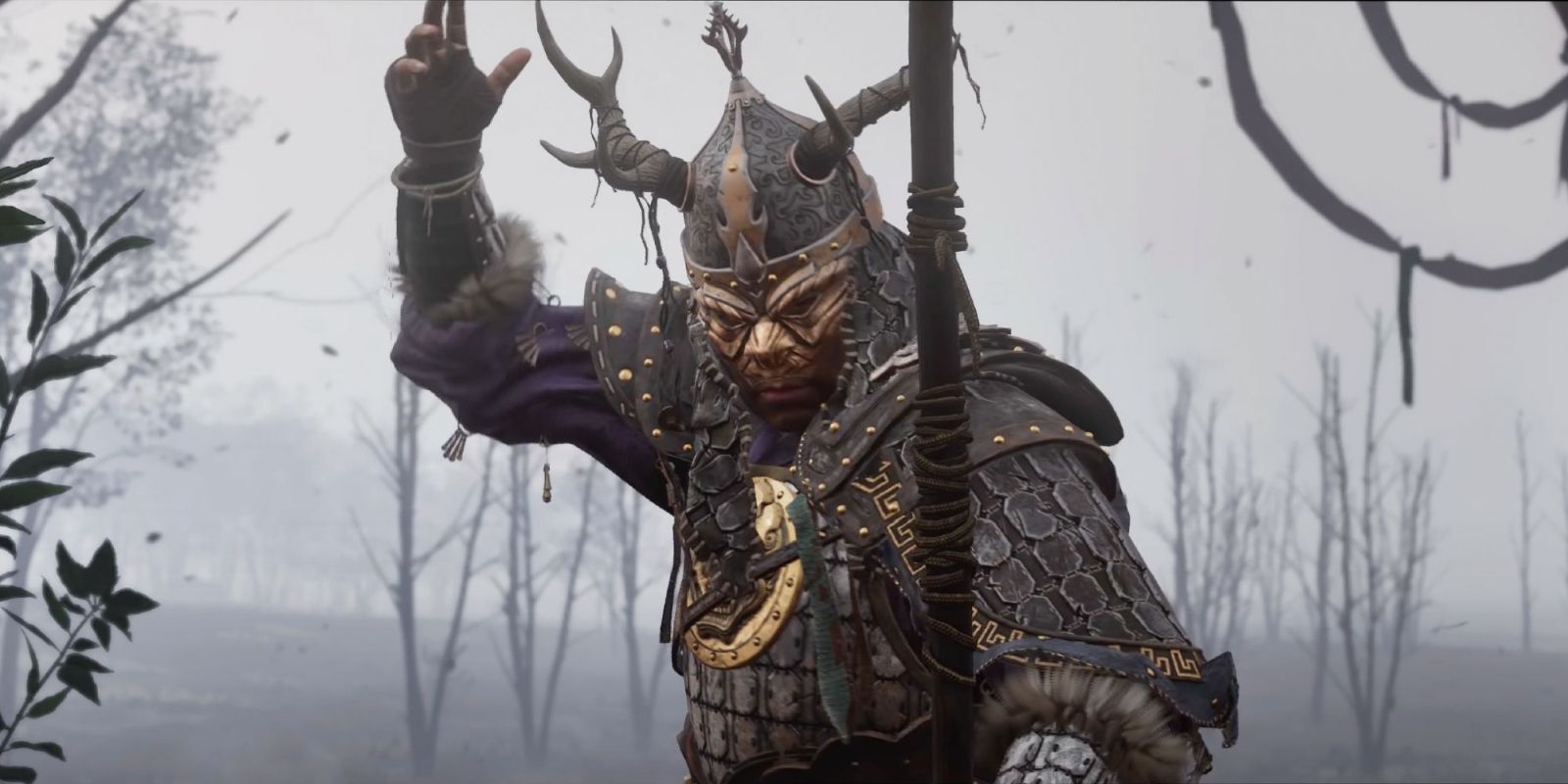 The Eagle brings with her a new class of warrior — a throat-singing shaman capable of buffing his allies, allowing them to attack relentlessly and suffer little ill effect from even your most powerful attacks. Since their singing mystically blocks incoming arrow attacks, you’ll have to blitz through the horde to take them out. Unfortunately for Jin, these shaman are capable fighters in their own right, only susceptible to dirty tactics like sticky bombs or aggressive use of the Wind stance.

While they don’t see much use in the campaign, when exploring Iki island you’ll also discover another ally of the Mongol army — eagles. Eagles act as spotters for the archers in camps, patrolling from above and looking to alert their masters with a piercing screech should they detect you. They can be felled by a carefully placed arrow, but by then your cover may already be blown.

Speaking of creatures, there are a number of new friends in Tales of Iki. Replacing the ridiculously cute fox Inari shrines on the mainline are touching moments where Jin remembers moments in his childhood during moments of stillness. Various animal Kami like deer and cats gather around him (and yes, you can pet them), expanding his charms just like the foxes do. These also reveal some of the quiet moments in Jin’s life, even if they aren’t always happy ones.

Expansion packs are notoriously the “B team” on writing, but Tales of Iki bucks that trend. Memories of Sorrow dot the landscape, bringing Jin back to his difficult childhood, including his participation in the attack on Iki island, and his relationship with his father. The campaign is every bit as touching and impactful as the original game, with Sucker Punch’s side missions even being worthy of mention.

Speaking of side missions, there are plenty. Shortly into your time on Iki island you’ll encounter a trio of archers willing to let you participate in a little challenge of skill. You’ll try to snuff out a series of lanterns as quickly as possible, with rewards offered for the fastest time. You can use your concentration skill, so this challenge is heavily influenced by how much you’ve leveled this skill on the mainland. I did terribly, so enjoy making fun of me.

There are several new mechanics, as well as twists on existing ones, in Tales of Iki. You’ll eventually get saddlebags for your horse that not only let you pick up double what you’d normally be able to carry for arrows, but also replenish your inventory when you mount up. Flaming arrows, being able to use the grappling hook to pull down objects, a dueling ring, 30 more banners, and much more await, if you step off the beaten path to discover them.

One of my favorite side missions involves a set of armor that belonged to a fallen warrior. This armor brings incredible advantage, allowing you to lethally counterattack twice during an extended-window perfect parry, but at the loss of your regular parry — a blessing and a curse. These little nuances keep Tales of Iki exciting, rather than feeling like “more of the same”.

The biggest challenge in the game comes from the poison that The Eagle has forced upon you. You will hallucinate at the worst possible times, blurring your vision, making you see things from your past, or just haunting you with images you’d rather not see. This can often allow some of the more devastating enemies to close position and absolutely destroy you. It changes things up, and makes you feel vulnerable without stripping you back to your yoroi hitatare (underclothes).

Unfortunately there are a few bugs at launch that mar the experience. While I’m able to accept a little wabi-sabi, these were a little more frequent than they were for the original launch. Framerate hitches, even when set to framerate preferred mode in graphical options, are still a frequent issue. The slow loading of character models in menus makes its way here from the PlayStation 4. If I had to hazard a guess, both of these are texture streaming hiccups. I’ve also seen some foes stuck in swimming poses in midair, and I had one major mission insist that I had to “Defeat the rest of the Mongols”, despite the entire area being completely clear, forcing me to restart my checkpoint. I’ve even had one full crash back to the home menu. Undoubtedly these will be ironed out over time, but I was surprised to see the framerate issues on Sony’s new hardware.

Ghost of Tsushima Tales of Iki delivers an absolute masterpiece to Sony’s PlayStation 5, alongside a remarkable expansion to an already phenomenal game. Some new mechanics keep things fresh, as does another excellent story from Sucker Punch. While there are a few hiccups to contend with, this is easily a must-have title for the year.

Ron Burke is the Editor in Chief for Gaming Trend. Currently living in Fort Worth, Texas, Ron is an old-school gamer who enjoys CRPGs, action/adventure, platformers, music games, and has recently gotten into tabletop gaming. Ron is also a fourth degree black belt, with a Master's rank in Matsumura Seito Shōrin-ryū, Moo Duk Kwan Tang Soo Do, Universal Tang Soo Do Alliance, and International Tang Soo Do Federation. He also holds ranks in several other styles in his search to be a well-rounded fighter. Ron has been married to Gaming Trend Editor, Laura Burke, for 21 years. They have three dogs - Pazuzu (Irish Terrier), Atë, and Calliope (both Australian Kelpie/Pit Bull mixes).
Related Articles: Ghost of Tsushima Director's Cut, Let's Play
Share
Tweet
Share
Submit