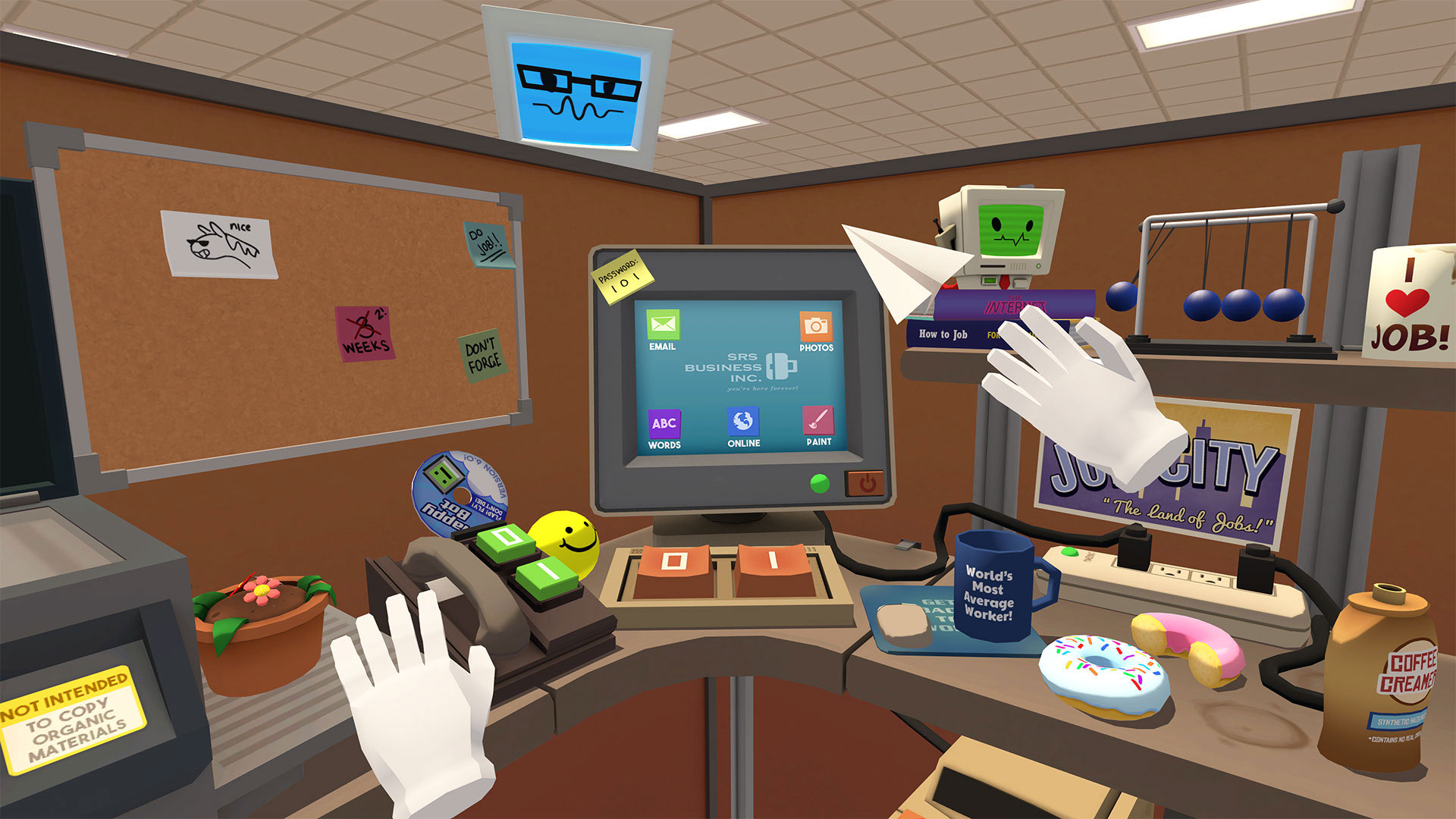 There’s no doubt that the PlayStation 4’s PSVR system has had a pretty solid launch. Many of the products that arrived on launch day were of the simulation variety, eschewing what one might classify as a game for a more pedestrian “experience” instead. You might imagine a game entitled Job Simulator would be exactly that.

Job Simulator is, in a way, exactly what it sounds like. You play a nondescript meatbag, a human who has taken on four jobs serving a cadre of friendly robots. Contemplations of a Terminator-esque uprising aside, your role begins as that of a clerical worker “jobbing” at a cubicle farm. Using a pair of PlayStation Move controllers, I proceeded to explore my tiny 6 feet by 6 feet depressing digs, but just then my overly-chipper boss arrived with work for me to do. My first job assignment was predictably entitled “GET TO WORK!”, but to even begin to be productive I’d need coffee. Grabbing my coffee mug, I used my personal coffee maker and added a diabetes-inducing level of creamer and sugar. Topping it off with a few too many donuts, I tossed my coffee cup across the room, along with the sugar container, creamer, and my previous job assignment ticket. (I guess I’m the office asshole.) Just then, my next assignment arrived. As if the game was taking a few jabs at my job output, it said “GET TO WORK”.

Job Simulator, at its core, is a sandbox. That said, it’s not without objectives. Dropped in your cube, you can simply play with all of the goodies at your desk, but turning around provides a large board that gives you an idea of what to do next. Typing on your PC, answering the phone, making copies, and loading DVDs into your PC are all very intuitive, using natural motion and requiring no real instructions. Ticking the balls of the Newton Cradle, shooting staples at your coworkers, photocopying everything (including food), and throwing anything you can wrap your meatbag hands around never gets old. Over the course of 30 or 40 minutes, you’ll complete the mundane tasks your robot overlords specify and move onto the second of the four scenarios.

Scenario two (though you can tackle them in any order) is running a restaurant. Like the cubicle farm, this space lets you interact with everything in any way you see fit. Crisping up bacon, throwing (and maybe cooking) eggs at people , blending up anything you’d care to jam in the blender and squirting it on a hunk of bread to make pizza slices, and adding a dash of Sriracha to people’s tea (I guess I’m the restaurant asshole) are just a sampling of the free-form activities available here. As before, you are confined to a standing 6 feet by 6 feet space, only this time a helpful reminder sits above the pickup window reminding you not to spit in the food.

Don’t spit in the food, human.

The third scenario casts you as a store clerk at the Slush-E Mart, a convenience store. Making hot dogs, putting Pepto in customer slushies, stealing (and sometimes selling) lotto tickets, and launching fireworks indoors (I guess I’m the store clerk asshole too) are things you can do here. You can also follow the instructions and move the story forward, if that’s your thing. There’s even a bit of a dustup in the store, an investigation, and some Inception-level remote control tidy-bot inside of this virtual world.

The last scenario, and easily my favorite, has the human doing menial tasks as a mechanic at the Grifty Lube. Here I’m expected to be an asshole, driving up labor costs by the second, jamming bananas in tailpipes to ensure repeat business, putting wooden tires on cars, and generally treating the customers like the trash they are. I like the kind of place that advertises its “Refund-Free” status right on the wall. It feels a little like home for an asshole like me.

Welcome to Grifty Lube – you will be screwed. Enjoy!

The only technical hitch I had revolved around grabbing things from the ground. Sometimes the PlayStation Camera would lose track of Move controllers or the VR headset, causing the game to lurch in an odd direction, creating a jarring and unnatural motion that made my head swim for a second. Other than that, I’m happy to report that Job Simulator is a nausea-free experience. The best part is that you don’t have to take my word for it — there is a demo version of the game that lets you tinker around in the cubicle farm portion to see for yourself.

Developer Owlchemy Labs has done a fantastic job showcasing how robots might interpret our nine-to-five office minion jobs. From the mundane cubicle toys and sticky patisserie treats like chocolate donuts with sprinkles, to filling headlights with headlight fluid and using a magic machine to jumbo-size hot dogs, they know what motivates human meatsacks. The deadpan narration and the joy of chrome-plating a customer’s inflated repair bill to use as a hood ornament makes for quite a few laugh-out-loud moments. As the game presents these scenarios as ‘simulation cartridges’, there’s nothing to stop Owlchemy Labs from creating new ones, and frankly I cannot wait.

When you create sandbox worlds, it’s very easy to leave the player to “make their own fun”, but here the mixture of intuitive controls, player agency, and tongue-in-cheek humor makes Job Simulator a must-have. While it’s a little on the short side, Job Simulator is the easiest VR title to recommend. If you have a VR headset, this game needs to be in your library.

Ron Burke is the Editor in Chief for Gaming Trend. Currently living in Fort Worth, Texas, Ron is an old-school gamer who enjoys CRPGs, action/adventure, platformers, music games, and has recently gotten into tabletop gaming. Ron is also a fourth degree black belt, with a Master's rank in Matsumura Seito Shōrin-ryū, Moo Duk Kwan Tang Soo Do, Universal Tang Soo Do Alliance, and International Tang Soo Do Federation. He also holds ranks in several other styles in his search to be a well-rounded fighter. Ron has been married to Gaming Trend Editor, Laura Burke, for 21 years. They have three dogs - Pazuzu (Irish Terrier), Atë, and Calliope (both Australian Kelpie/Pit Bull mixes).
Related Articles: Job Simulator, VR
Share
Tweet
Share
Submit