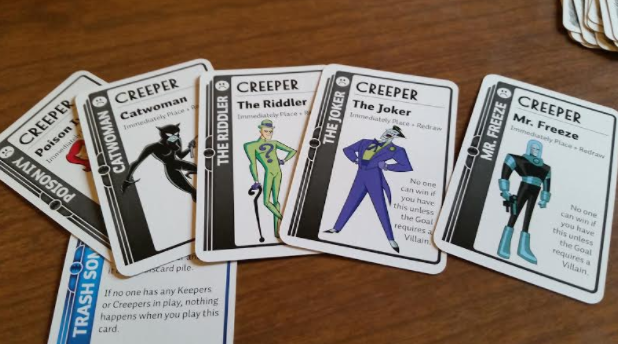 After gaming for awhile, I’ve discovered there are some unique personalities that come to the table. You’ve got people that rage quit, people that take a month to take an action, people that get distracted on their phone, and people who advise everyone else on what move should be taken. Then there’s the equally essential and irritating rules lawyer. A rules lawyer is absolutely indispensable to a group because that person is often the one that teaches the game to the others. Yet, the rules lawyer can also be an annoying know-it-all who happens to remember a rule at just the moment it benefits him or her the most. If putting the rules lawyer in their place sounds appealing, then you’re going to love Batman Fluxx.

Batman Fluxx is a card game where the rules are constantly, well, you know, in flux. The rules are ridiculously simple to start. Every player is dealt three cards. The first person can then draw one card from the deck and play one of the four cards now in hand. If it sounds boring, it is, but the game doesn’t stay that way for long.

There are six types of cards within the deck: keeper, creeper, action, surprise, goal, and new rule. The cards are beautifully depicted with the illustrations from the classic Batman: The Animated Series. Fans of the series may want this just for the artwork alone. Once the game begins, the object is to match the requirements of a played goal card with a particular combination of keepers and/or creepers, but the engine that drives the game are the new rule cards.

Rule cards can change how players use the cards. They can cause players to draw or play more cards. They can limit the number of keepers you can play or even the size of your hand. The thing that makes the rule cards really interesting is that the new rule takes effect immediately. Drew only one card and want more to play this turn? If you have a rule card that allows you to draw three cards, play it. You then immediately draw two more cards to get up to the three draw limit you just set. With the right rule card, you can find yourself jump from struggling to winning all in one turn.

Artwork from the Animated Series really adds to the flavor of the game.

But the rule cards are a double-edged sword. Games can dwaddle along if the rules force players to play more cards than they can draw or limit hand sizes to a solitary card. As fun as it is to have large draw and play limits, the game suffers when rule cards are against you and new ones don’t pop up.

In the midst of all this chaos, there’s an objective to complete to win. Each goal card lists a different condition for victory. Many of these involved using the keeper cards which depict different heroes from the Batman universe. These keepers often allow you to take bonus actions as well. It sounds as if it would be advantageous to play them early, but only one goal card is active at a time. In the ever-changing landscape, it’s quite possible to be close to victory just to see the goal change just prior to the next turn.

Then there’s the creeper cards, which include illustrations of Batman’s nemeses. In normal circumstances, they prevent anyone from winning unless the goal card has certain villains listed. Since creeper cards must be played when drawn, the tend to delay the game until cards can be drawn that take some or all of them away.

This isn’t to say the game is broken. It’s not, and I can see many people enjoying the great artwork and quirky game play. When the game is flowing, it can be an enjoyable experience that always seems fresh with the unique use of rule cards. But the game can become a frustrating affair when the rules prevent planning. This Jekyll and Hide game play makes it a mixed bag to recommend. It will come down your preference for your theme, interest in the spontaneity of play, or desire to drive the rules lawyer insane.

Batman Fluxx is not unlike one of Joker's schemes. It's chaotic, absurd, and completely unpredictable. The game can be fun if the game is flowing, and you are with the right crowd. However, random rule changes can cause the game to bog down making it tedious and completely devoid of strategy. You mileage will depend on the theme of the Fluxx deck you have, and your level of patience.