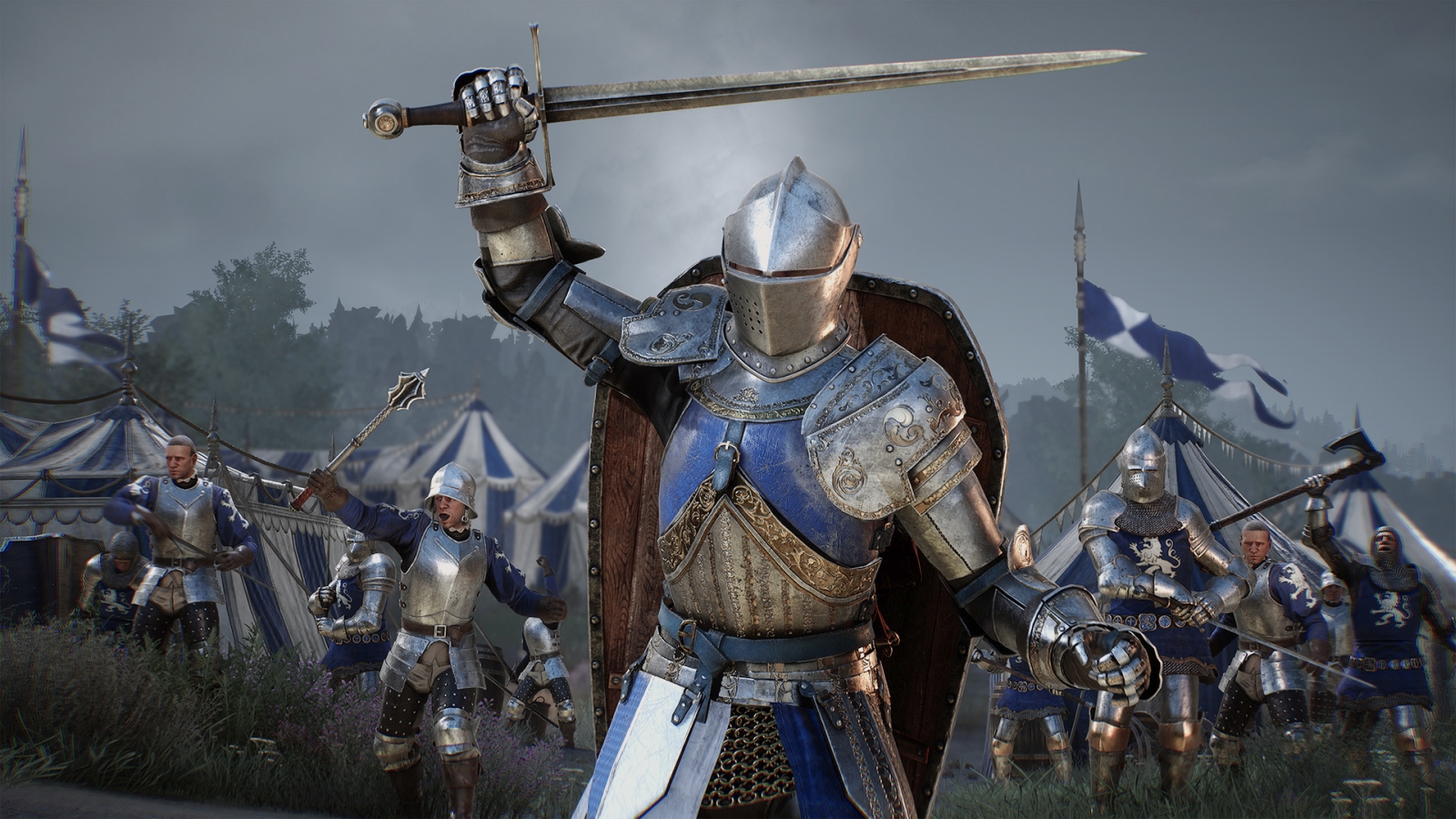 When my editor in chief here at Gaming Trend asked me if I’d like to help him check out Chivalry 2, I wasn’t sure what to expect. I hadn’t played the first one, and in fact had never even heard of it before. Ron did the preview for it a few weeks back, which you can read here, and assured me I’d enjoy it. I love anything to do with medieval times, so I said sure, why not! Little did I know that I’d get sucked into Chivalry 2 so hard that it was all I’d play for a week straight. Honestly, it’s like nothing I have ever seen before, and it’s glorious, gory, hilarious, and utterly fantastic all at the same time.

Chivalry 2 was inspired by epic medieval movie battles, with matches that consist of teams of either 40 or 64 players each! That is a LOT of people on a battleground, and the insanity that ensues is indeed epic, and downright hilarious at times. You can choose one of four classes that each have their own subclasses after reaching a certain level. You can easily swap between classes while you’re dead, which will happen quite often. You’ll either be on team Agatha or team Mason, which will switch constantly to keep you on your toes. Some of the maps are objective maps where you need to push things along before you then siege a castle or kill the king. Other maps have you fighting in an arena with fire traps, spikes, and wells to fall into. It’s pure madness, and I love every second of it. 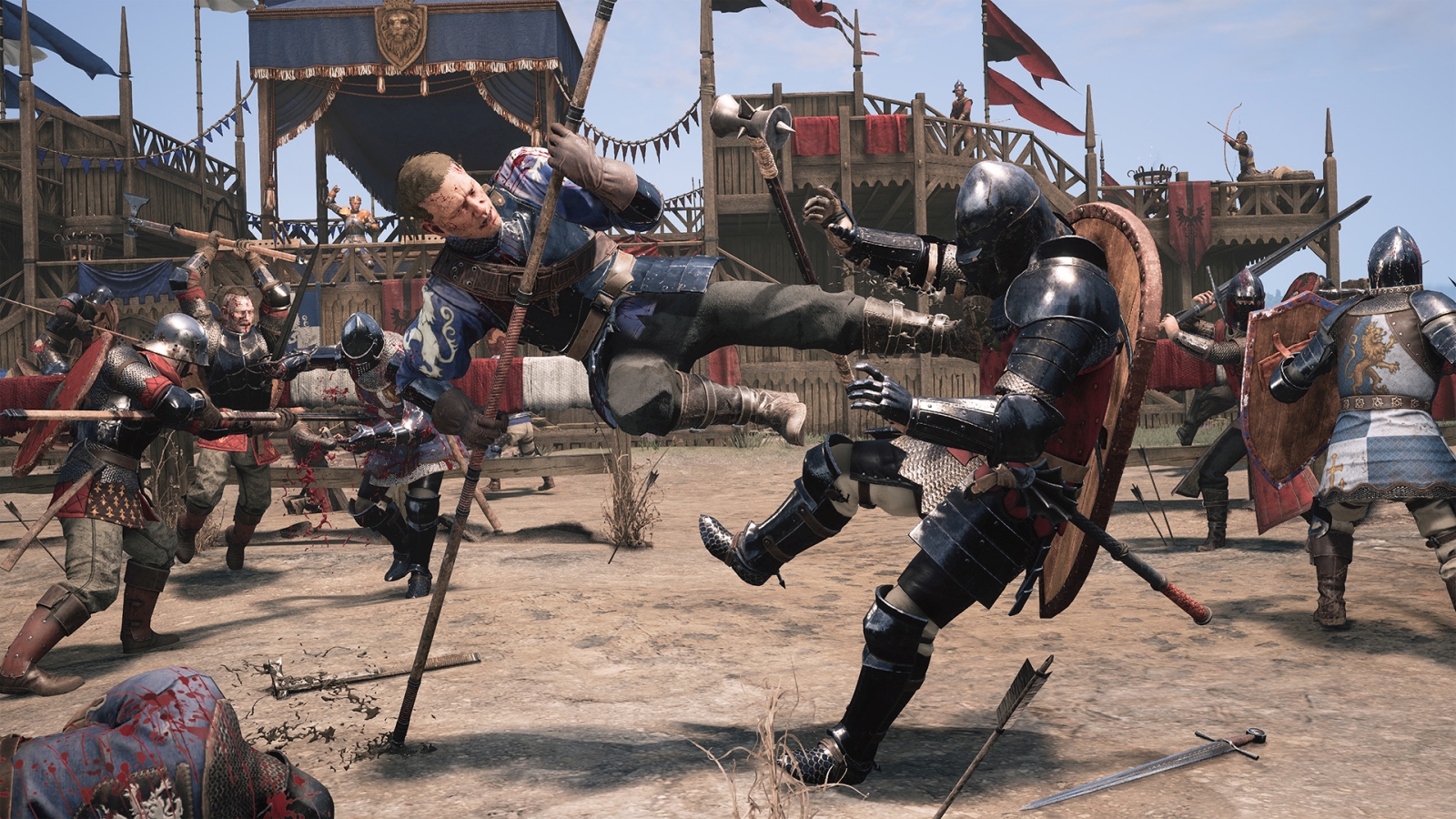 You will find new and interesting ways to kill your enemy every time you play Chivalry 2!

Let’s talk about the maps first. They are stunning and quite realistic which makes it truly feel as though you are living in that moment in time. You’d think that the actual game play and combat are what make this game so amazing, but a huge chunk of it is just how stunning and real the maps feel. Besides the utter chaos that is happening around you with all of the other players on the battlefield, there are also dozens of objects scattered on each map that you can either pick up and use, or throw to kill your opponents with. Not only that, but there are also huge weapons and moveable objects on the field like catapults, siege towers and even jousting targets you can use to kill an enemy with. You can pretty much pick up anything and everything, even your opponent’s severed head, and toss it at someone to try to get a kill. On maps that have you inside castle walls, there will be many advantageous areas to control to try to hurt people down below with ballistas, oil pots, or even just a good ole fashioned rock over the wall to the head. Think outside the box, and look for places to use to your advantage.

Chivalry 2 gives you plenty of customization options for your armor, though the faces are quite horrific up close. That’s okay though, because you’ll be wearing cool looking helmets most of the time. The majority of the custom items are earned through leveling up or through achievements, though they do currently have one cosmetic cash shop bundle you can buy in the store, which leads me to believe there will probably be more down the road. You’ll start off looking kind of doofy but before long you’ll have some cool armor choices and look like a badass Knight.

At a glance you might think that the combat in Chivalry 2 is all hack-and-slash while hoping for the best. Well…some of it is, but there is a lot of timing to get down just right to be effective. There are a number of combos to memorize, as well as learning how to swing your body with the weapon just right. The tutorial does a great job of teaching you everything you need to know, and while it might seem like a lot to take in, it really isn’t. Once you get your feet wet with a few battles you’ll get the hang of things. I found myself most drawn to the Vanguard and have mostly played around with that class, but fiddled with the Archer and Knight a bit. Each class has a remarkable playstyle that requires much more than just charging in, screaming, and hoping you hit your mark. Take the time to learn how each class works, and you’ll be racking up the kill points in no time. 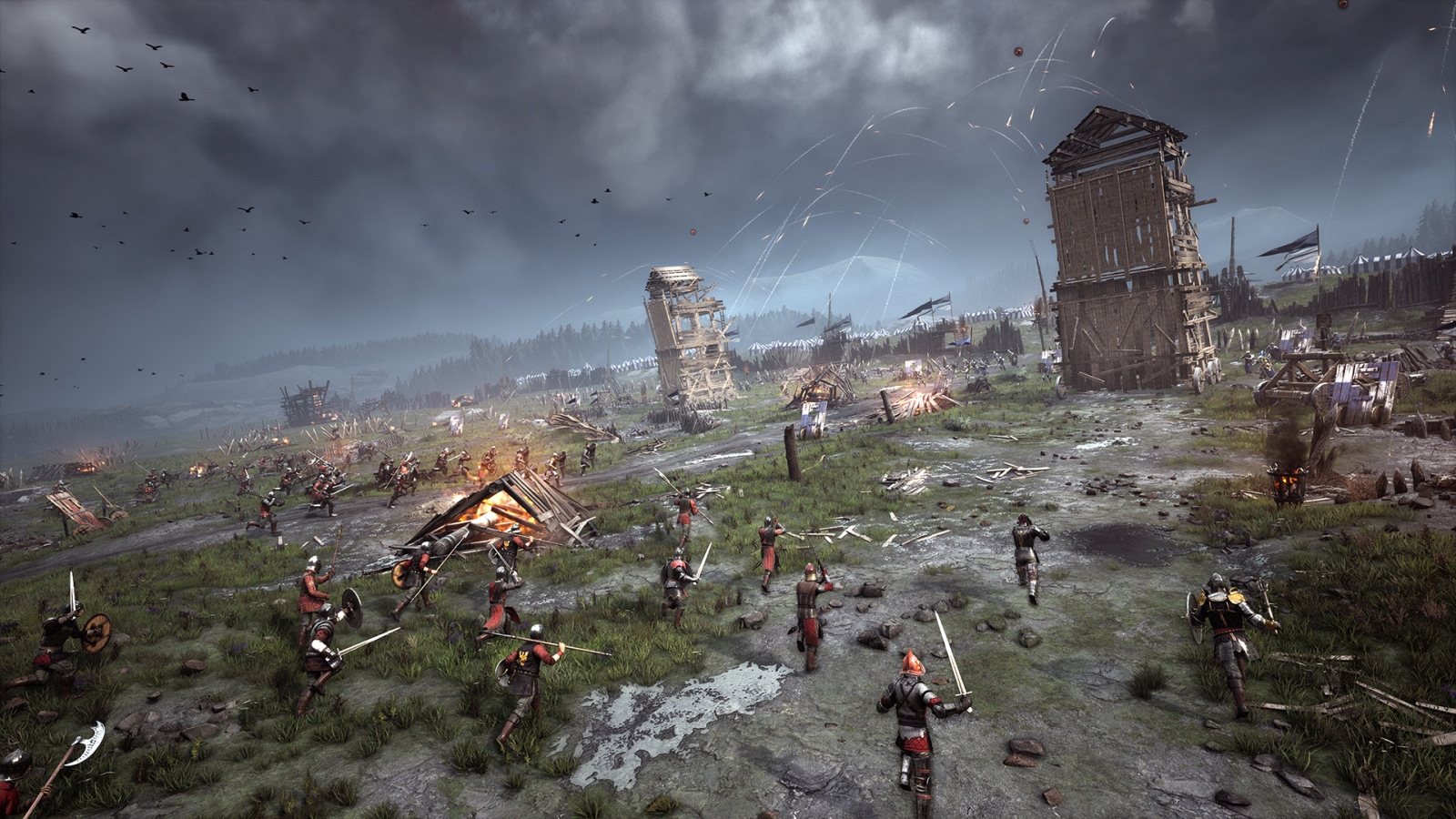 Siege towers, ballista’s catapults, and arrows showering down on top of you, all in a days work in medieval times!

You will find yourself chuckling quite often at all the hilarious ways one can either die, or kill another. I’ve gotten flung into oblivion by a ballista, and have seen people chunk shields across the map and take someone’s head off. I’ve also seen someone fight with every weapon they had, pick up random weapons off the ground, and then somehow manage to survive and kill his opponent with a simple punch to the face. You can also launch yourself over the castle walls in a catapult. Nowhere is safe in Chivalry 2 and watching all the silly ways to die has become one of the best parts of the game for me.

Each map will have objectives that your team needs to either defend or push along, so pay attention to that…don’t be the jerk who is off trying to rack up kills when you have a timed objective going. Fight on the wagon or siege tower as you move it along. You’ll die quite often, but not as often as you need to if you stick together as a team and help with objectives. Sometimes the enemy will all respawn at the same time and swarm you, so you’re better off helping each other than being off alone. Look for opportunities to jump in and make a difference, while also watching the timers and objectives. 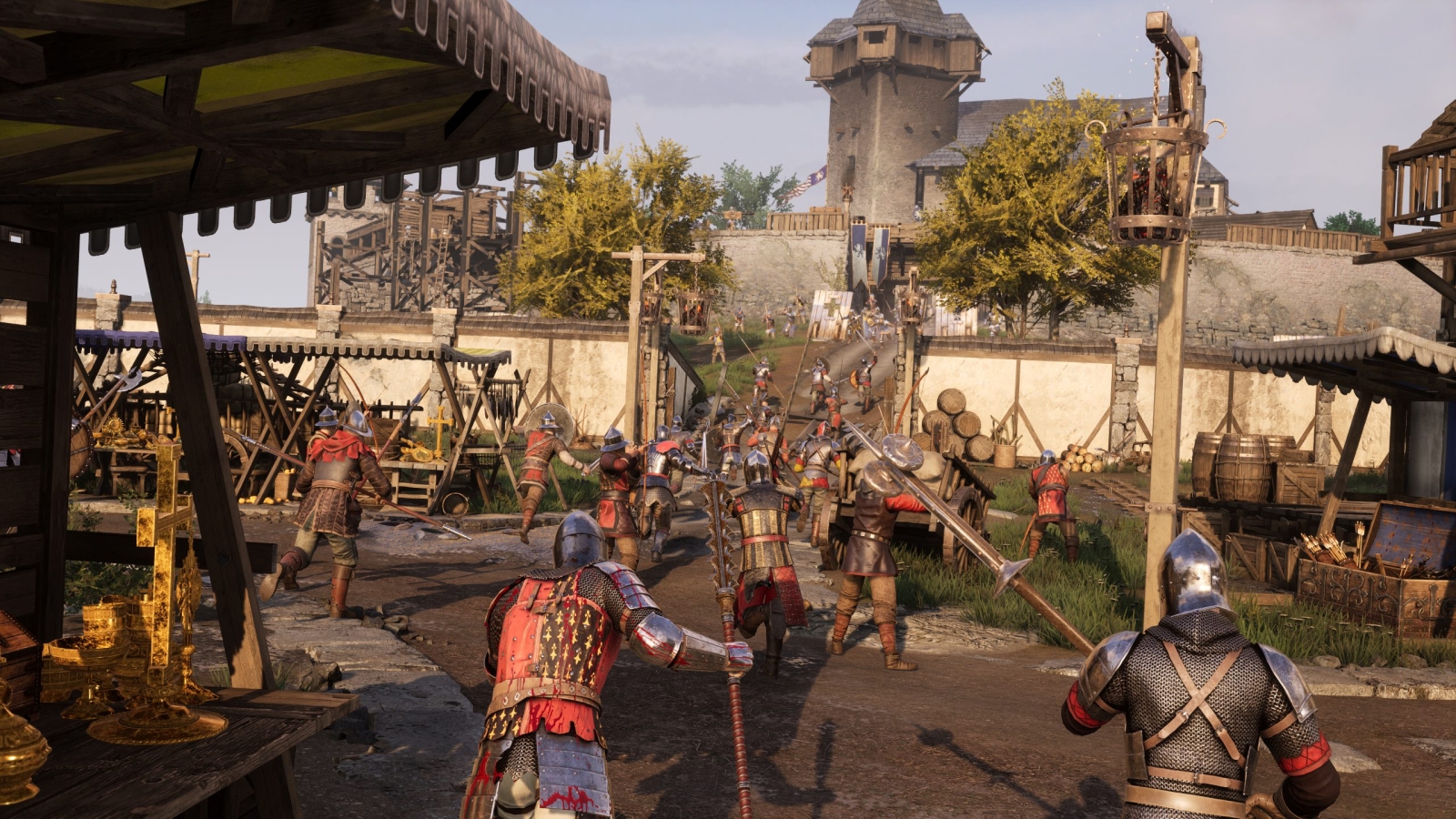 Unfortunately the one negative thing I have to say about Chivalry 2 is a game breaking bug that I hope gets addressed ASAP. It is frustrating as hell to try to form a group with your friends. There has not been one single time I have fired up the game to play with friends where we didn’t spend 15-20 minutes trying to get everyone in the group. No matter which of us starts the group, inevitably at least one or two of us can’t be invited, regardless of the fact everyone is IN the game. It will show some of us as being online, but not in Chivalry 2, and other times it will show one of us as in the game, but when the invite goes out, the person never gets it. Last session we also saw that the invite was seen, and accepted, but they never joined our group. Each of us have restart both the Epic client and the game several times, there is no rhyme or reason to it, but eventually if we are lucky enough we all get in the group.

Another gripe is that a game that supports 40v40 and 64v64 PvP should allow more than 4 friends in a group together, but unfortunately doesn’t. We have 6 people who play together frequently, all of which want to play Chivalry 2 together, and as far as I understand only 4 of us can be in a group together. My humble request to the devs: please allow us to invite as many friends as we want! 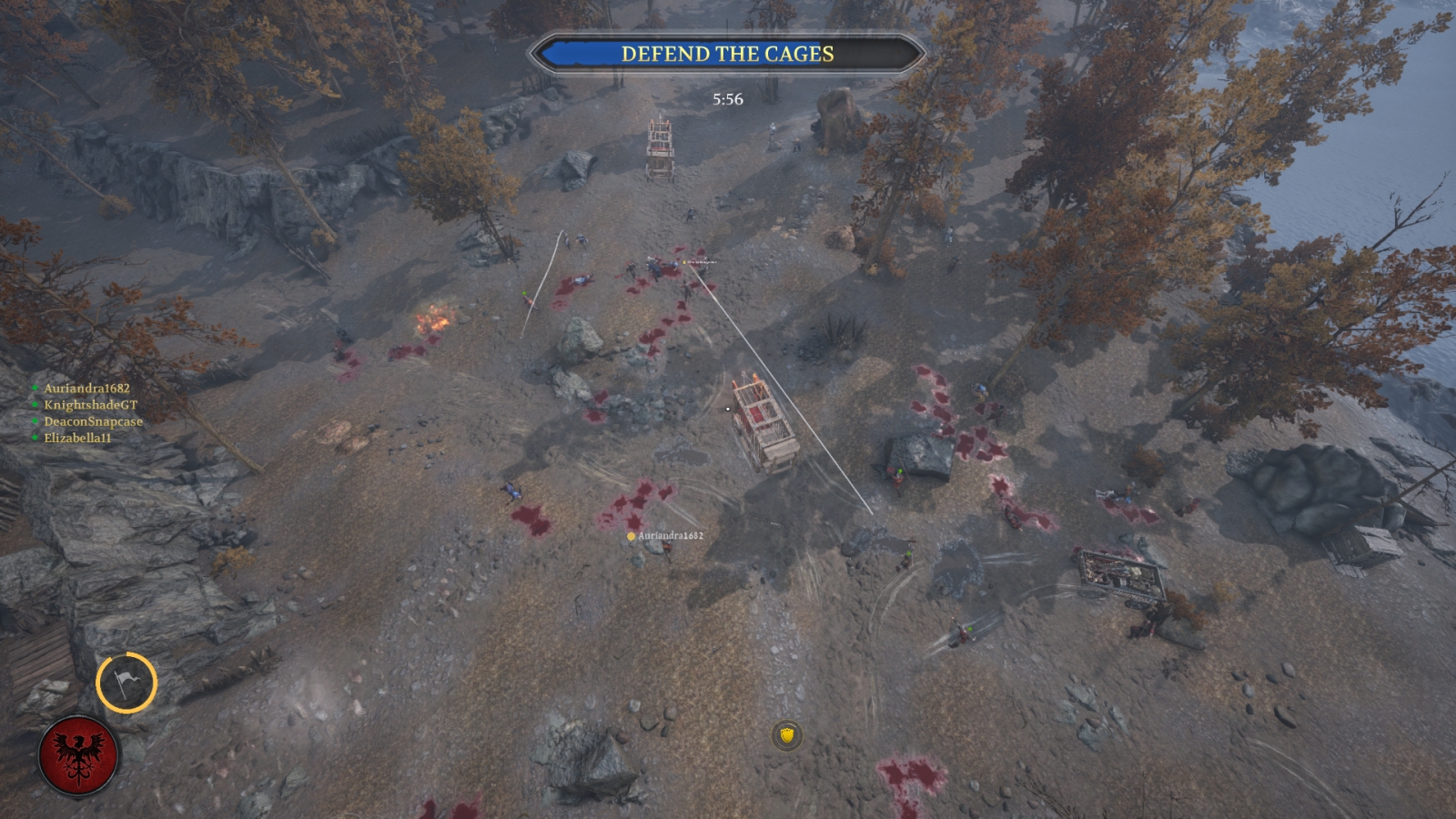 My adventure flying above the whole match. I got to explore some cool places I don’t think anyone was intended to see.

I also spent an entire match last night bugged out to where I was able to fly over the map to the very edges nobody was ever intended to see, as well as being able to dive under the map into the ground. While it was really cool, I have no idea how or why it happened. I watched the entire game from the air, and got to explore some really cool areas that I am sure nobody will ever see or appreciate, but it was highly frustrating to spend a whole match sitting out in a bugged state. Despite the fact there are some silly bugs or issues that need to be addressed, the game is still very enjoyable.

I can’t end this review without talking about the absolutely hilarious (in a good way) voice work in this game. Your character can do several variations of a battlecry, as well as dozens of emotes. I constantly find myself chuckling at them as we play, and it never gets old. This along with all of the other components mentioned above make this game so much fun to play.

I was not at all expecting Chivalry 2 to be this much fun. Sure, there are a few things that need to be worked out, most importantly the friend invite issue, but the game is still highly enjoyable and something very different. It’s a game I can hop into and play for either a few matches, or a few hours and still come out of it with a smile on my face.

Chivalry 2 is currently selling for $39.99 USD on the Epic store

Chivalry 2 was a pleasant surprise, and something totally different in the PvP realm for me. There are a few bugs that need to be fixed, but the maps are gorgeous and the gameplay is engaging and fun. The humor and endless ways you can die are very appreciated.

Holly Hudspeth is a best-selling author living in Fort Worth, Texas. She has six published novels to date; The Skyy Huntington Series, which is an epic dark fantasy adventure, and One Small Detail, a stand-alone medieval fantasy. Holly also enjoys writing fan fiction based on her avatars from games such as EverQuest, Elder Scrolls Online, and World of Warcraft. Her first major purchase at the established age of nine was the NES, and she has been gaming ever since. She enjoys fantasy games, city builders, RPGs, MMOs, SMITE, and The Sims franchise. Most nights she is in SMITE with her husband and friends, or playing ESO. When she isn't gaming, she is probably either at Disney or planning her next trip there.
Related Articles: Chivalry II
Share
Tweet
Share
Submit