There’s something about 2D side-scrolling games that rings the nostalgic bell for all gamers, especially when playing on a Nintendo console.  And when done right, it will leave an impression on you for years.  Outbuddies DX is a side-scrolling, action, “shoot ‘em ‘til they’re dead” Metroidvania exploration game that feels like it was developed with care and precision, all while paying homage to past games while carving a new niche for itself.  Not only that, but the game takes full advantage of the Nintendo Switch, allowing for local co-op play with a buddy.  It’s important for me to state that Outbuddies DX feels like the triumphant return to true Metroidvania-style games, while injecting new elements into the genre to feel current and a cut above the rest.

Upon starting the game, I was entranced by the soundtrack and have been humming it throughout the day.  It’s a rhythmic tune that sets the mood for the ominous adventure you’re setting out on, and one that you’ll find yourself shooting to whenever you enter into behemoth boss battles or surrounded by hordes of creatures.  A perfect soundtrack matched with equally great gameplay is a recipe for a memorable experience (à la Doom 2016).  Like many Metroidvania games of the late 80s and early 90’s, Outbuddies DX doesn’t spend much time setting up a story through whimsical dialogue but lets the gameplay and art style do the talking.  Of course, it gives you a quick rundown of the story via a short cutscene to get the ball rolling, define the hero’s call to action, but that’s it, because that’s all that’s needed. 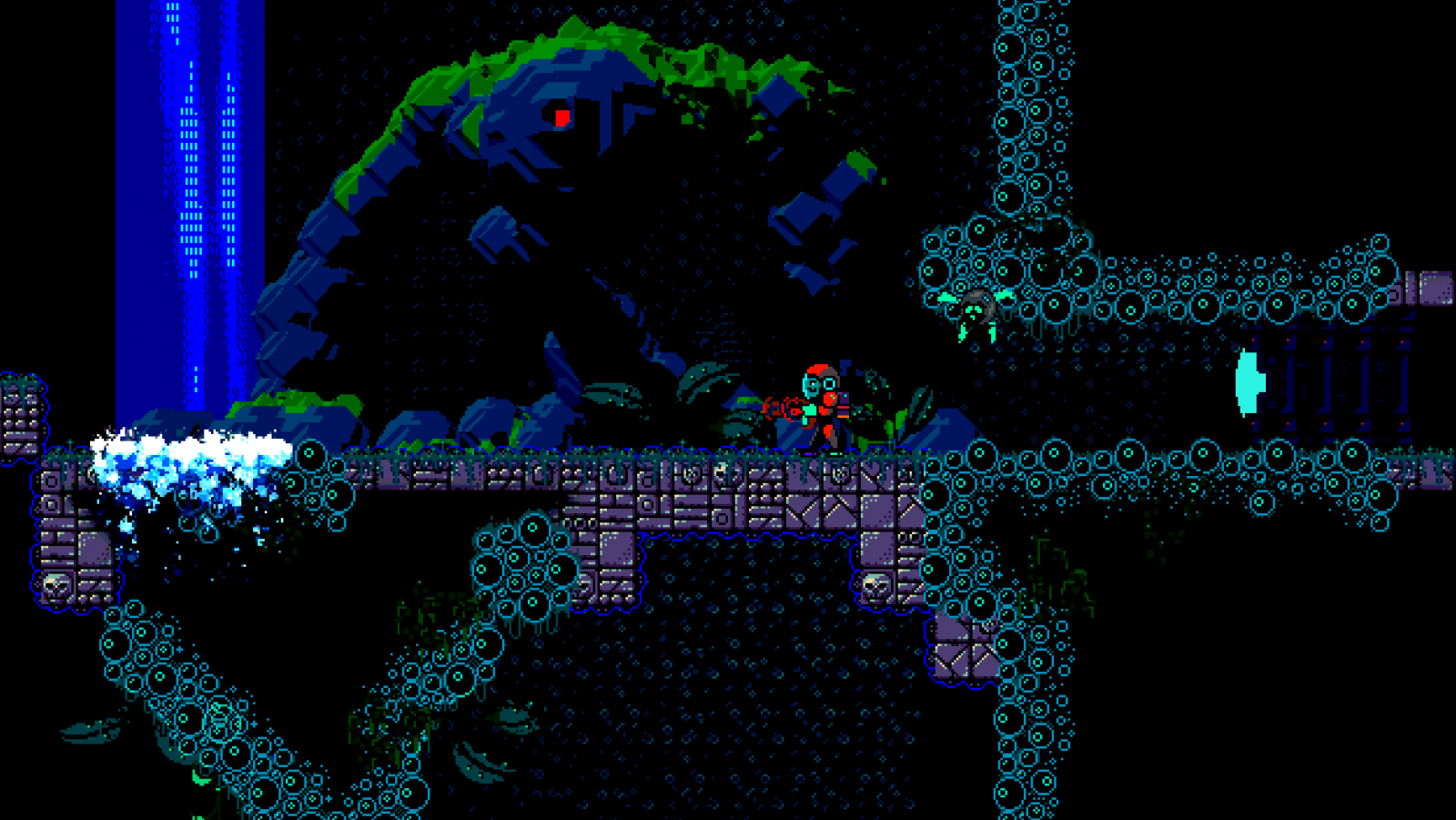 Watch every step you take… it may be your last.

You play as Nicolay Bernstein, a maritime archaeologist who’s consumed with the idea of an ancient civilization that was prominent before humans.  It’s a deep enough premise to get the gears in your noggin going.  An unfortunate event occurs, sending you into an underground world that feels and looks familiar, yet alien.  Familiar in that it has many cues of platforming and Metroidvania style games yet alien enough to believe that another civilization existed.  The levels are a beautiful labyrinth of exploratory chaos, built with intricacy to match the game’s mechanics, controls, and gameplay.  Though the underground city is grim and dark, the beautifully crafted art makes the world easy to navigate.  Though it’s easy to get turned around as you explore the subterranean world, you never lose your positioning as it’s all interconnected, and you have a minimap in the top right of the screen for those who are directionally challenged.

Levels are broken down into somewhat large biomes for you to explore before moving onto the next area, and you will want to revisit them as you unlock more advanced skill sets because there are goodies to be found.  Alongside Nicolay is a hoverdroid named Buddy that can perform a plethora of different actions like scanning the level for secret locations, using telekinesis for moving objects, and hacking enemies to control them.  Having Buddy as a tool to scout ahead and search the subterranean world and still perform his many functions felt groundbreaking in this genre, as it reshapes the mold for Metroidvania games. 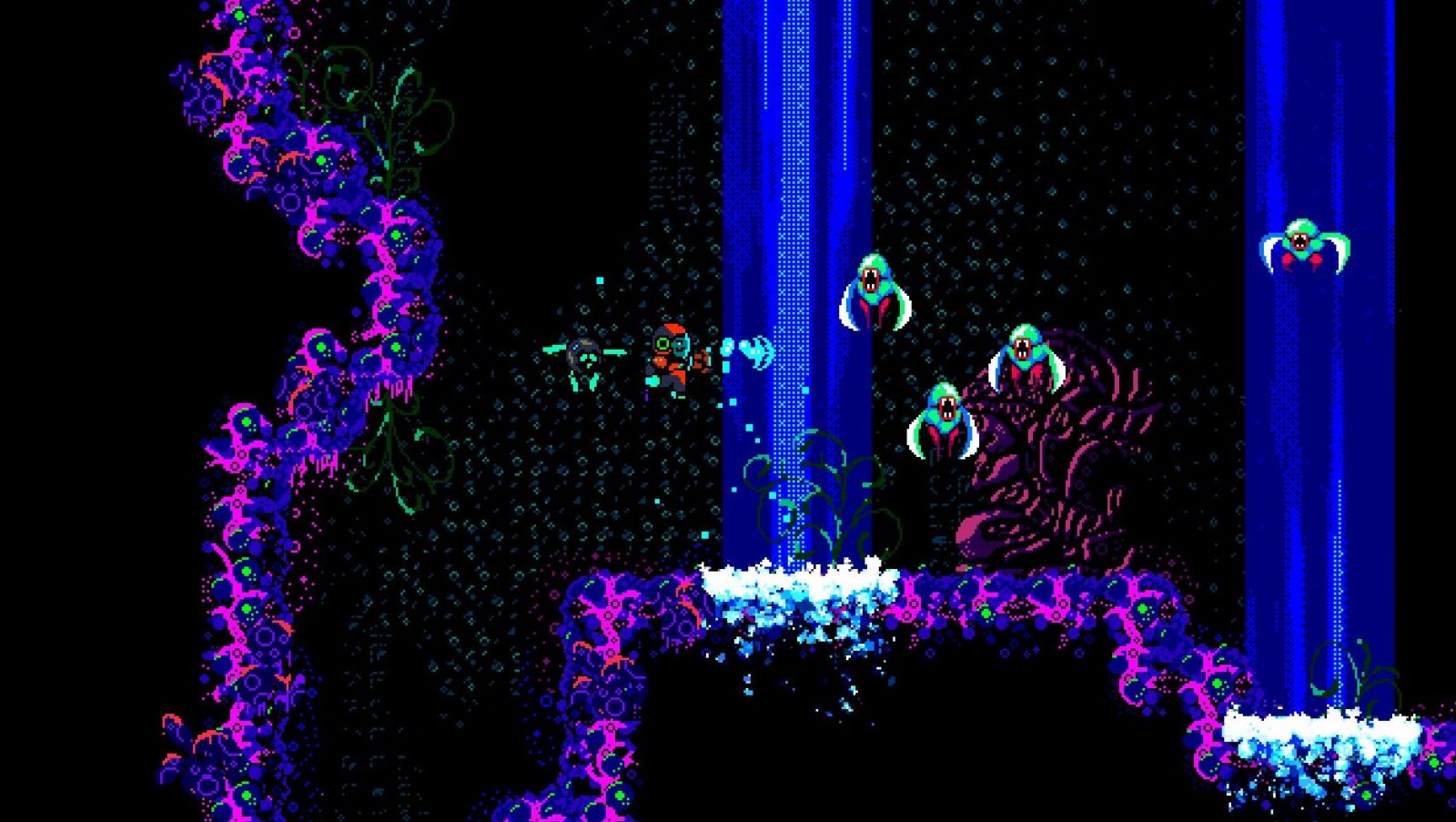 In this world the fish eat you.

The more I played I felt that the developers had played iconic games like Blaster Master (NES), Castlevania (NES), Metroid, and Ninja Gaiden (NES).  Outbuddies DX feels like it’s the embodiment of those, taking cues like zooming in and out to giving you different camera perspectives (Blaster Master), going prone into a ball (Metroid), and even jumping from wall to wall Ninja Gaiden (NES) to access hard to reach areas.  The controls felt tight and responsive, but the responsiveness Joy-Con’s does limit the precision.  This is easily corrected by using the pro controller or playing in docked mode.  Shooting, jumping and maneuvering is a breeze as there is little input lag, and it’s needed because enemies come at you quick.

Progression in the game comes as you discover ancient technological relics in the world that tell stories of Old Gods that were left behind as overseers of an ancient civilization.  Collecting Old God items unlocks new passages for you to explore and also discover Corridium Protocols (upgrades), treasures of the Old Gods, and more.  You’ll also discover new weapons and items that allow you to explore hidden locations and strategically attack enemies, without causing an imbalance in gameplay.  As I began exploring this new world that felt built from the ground up to explore, discover, and traverse, I found that the game uses a unique method of teaching new mechanics.  Instead of pulling you out of the game and experience, it uses visual cues to show you how to perform these new moves.  Even these design elements find their way into enemy interactions; and like Metroidvania games of the late 80s, there’s no simple way to approach combat. 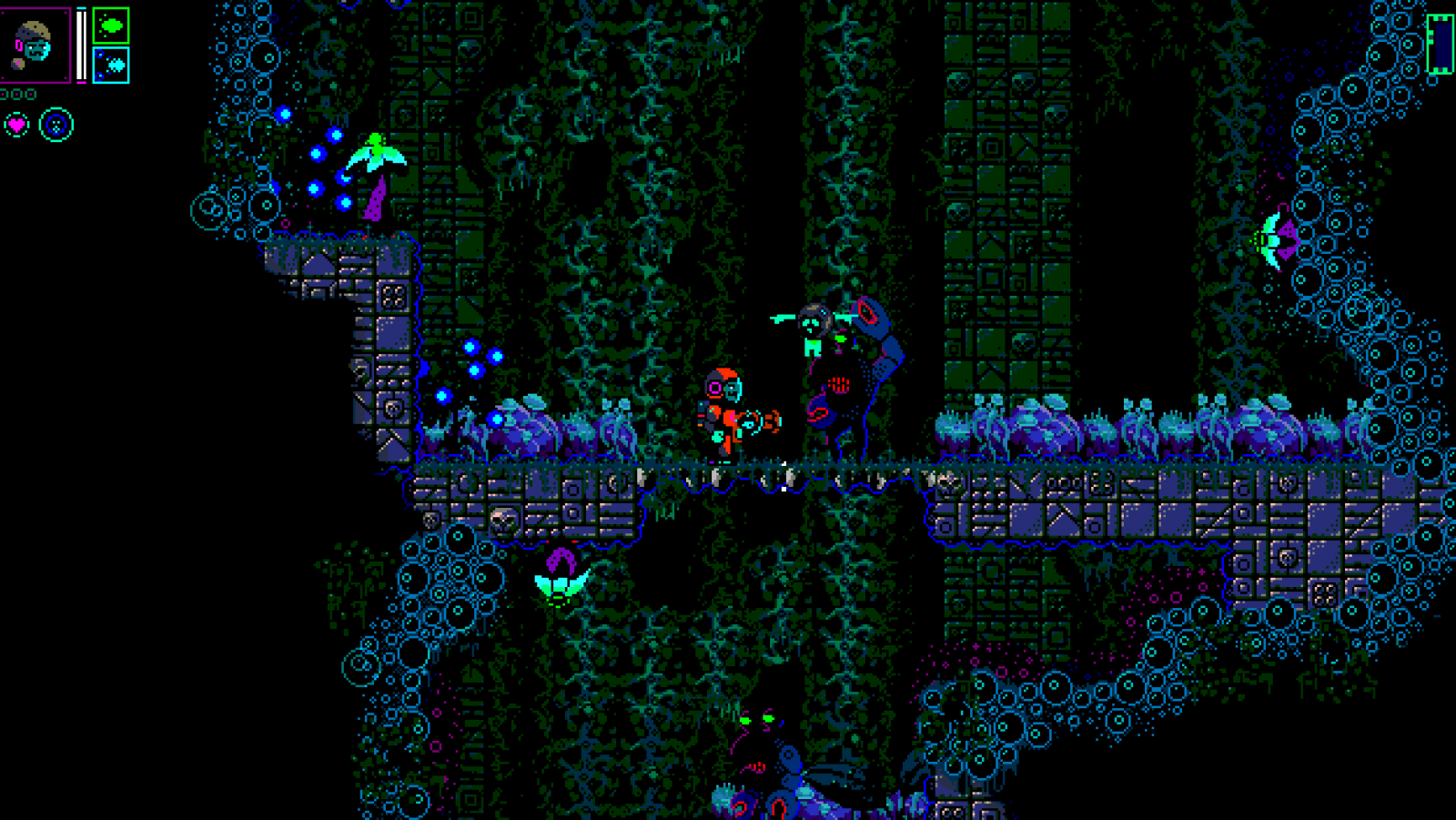 Be very, very quiet, it can hear you.

It’s essential that you use those upgrades and years of callused gamer thumbs when going into battle.  Approaching an enemy means you have to study their movements, assess their abilities, and be ready for anything.  Coming across the first enemy, it’s made clear that I had no weapon to challenge them or survive, but there’s a lesson learned.  What you’ll take away from these early moments are vital information to survive.  The game is more than facing your foes head on, it’s about strategy and cunningness.

The enemy couldn’t see me but could feel my movements, so this forced me to use dashes and jumps to evade, but know when to not move.  It’s this design detail that makes every interaction with an enemy, whether they are flying creatures, use sight and sound to locate you, or a school of blood-thirsty tuna, a threat.  The level of difficulty is enough to make you rage quit, but defeating an enemy that has handed you your butt a few times is as rewarding as ever.  To make things even harder, in co-op, enemy’s tactics also change to greatly increase threat levels.  Some enemies have shields that must be hacked by Buddy, bosses attack Buddy and expose his weakness, and more. 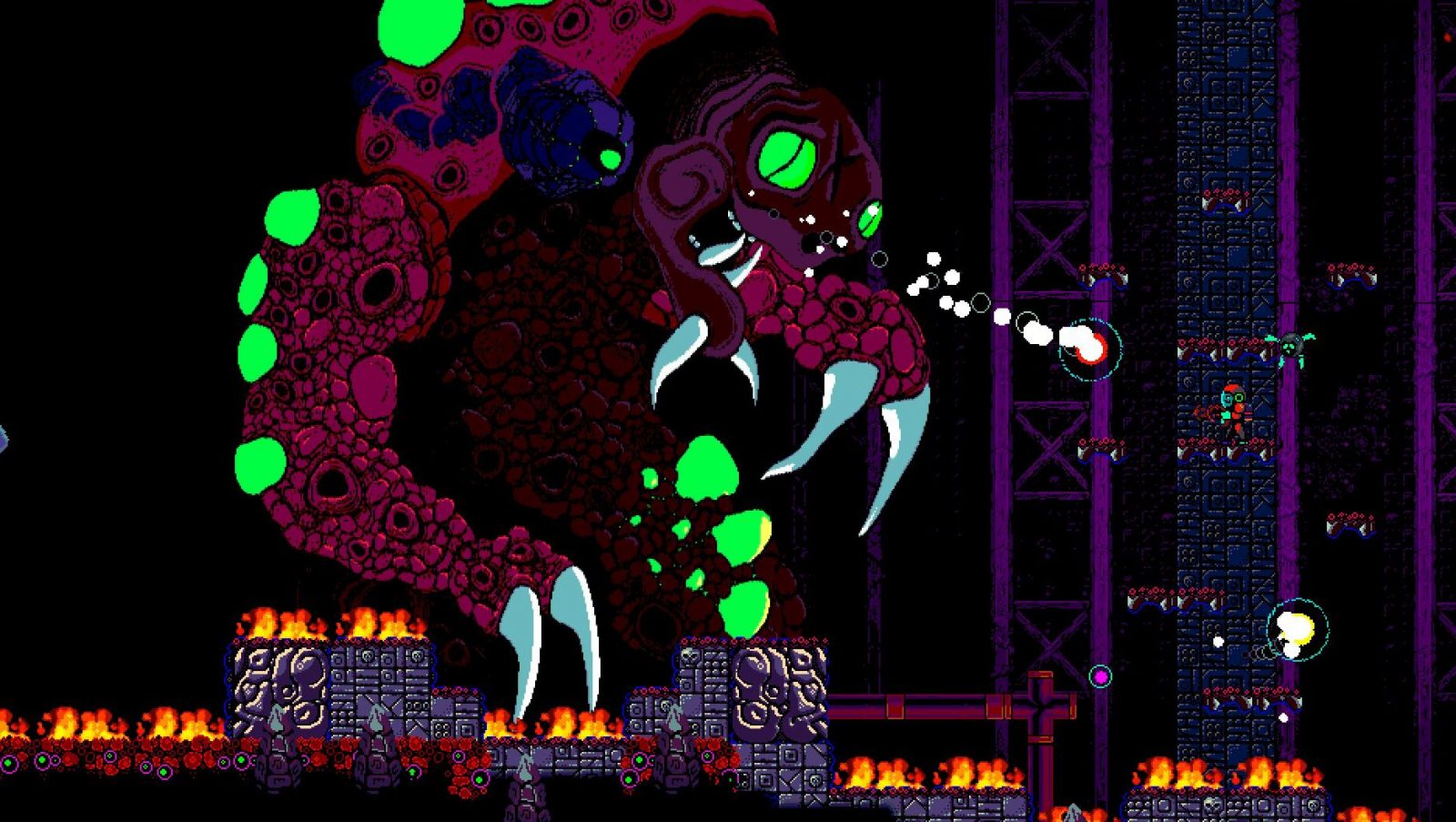 Big bosses don’t take no for an answer.

This brings me to the boss fights; I don’t have to explain that boss fights in Metroidvania games should be difficult, blood-pressure raising experiences, and I got what I wanted.  My first fight with a phantom-like creature called Blackthorn brought on moments of instant frustration, but they were well deserved.  At times, it’s almost as if the bosses knew what my next attack would be or where I’d jump, and this made the experience memorable.  I’ve always felt that a game should challenge a player, not make them overpowered to the point where I’m simply killing time.

I did find one issue with traversal in the game that caused me some frustration, especially when trying to reach certain sections.  Normally, in games where you can drop through a thin plain to reach another area (typically by holding down and pressing the jump button), you usually land on that next flat plain.  Unfortunately, if you continue to hold down as you drop through, you will fall through multiple plains (if the plains are meant for you to fall through) until you land on solid ground.  This has caused me to fall onto enemies and die multiple times.  Not a game-breaking flaw, but something to take note of.

Outbuddies DX is the quintessential perfect game, regardless of how you cut it. From the music that sets the tone and ramps up in the heat of battle, to the many weapons available, and the iconic and memorable boss battles, it’s clear that years of development Outbuddies DX has gone through will revolutionize the Metroidvania genre.

T.K. is a freelance writer, narrative designer, and author. Writing and developing narratives and giving voices to digital world and characters is his passion. As a game writer, QA game analyst, and editor for Gaming Trend, he enjoys being a part of the gaming industry.
Related Articles: Indies, Outbuddies DX
Share
Tweet
Share
Submit