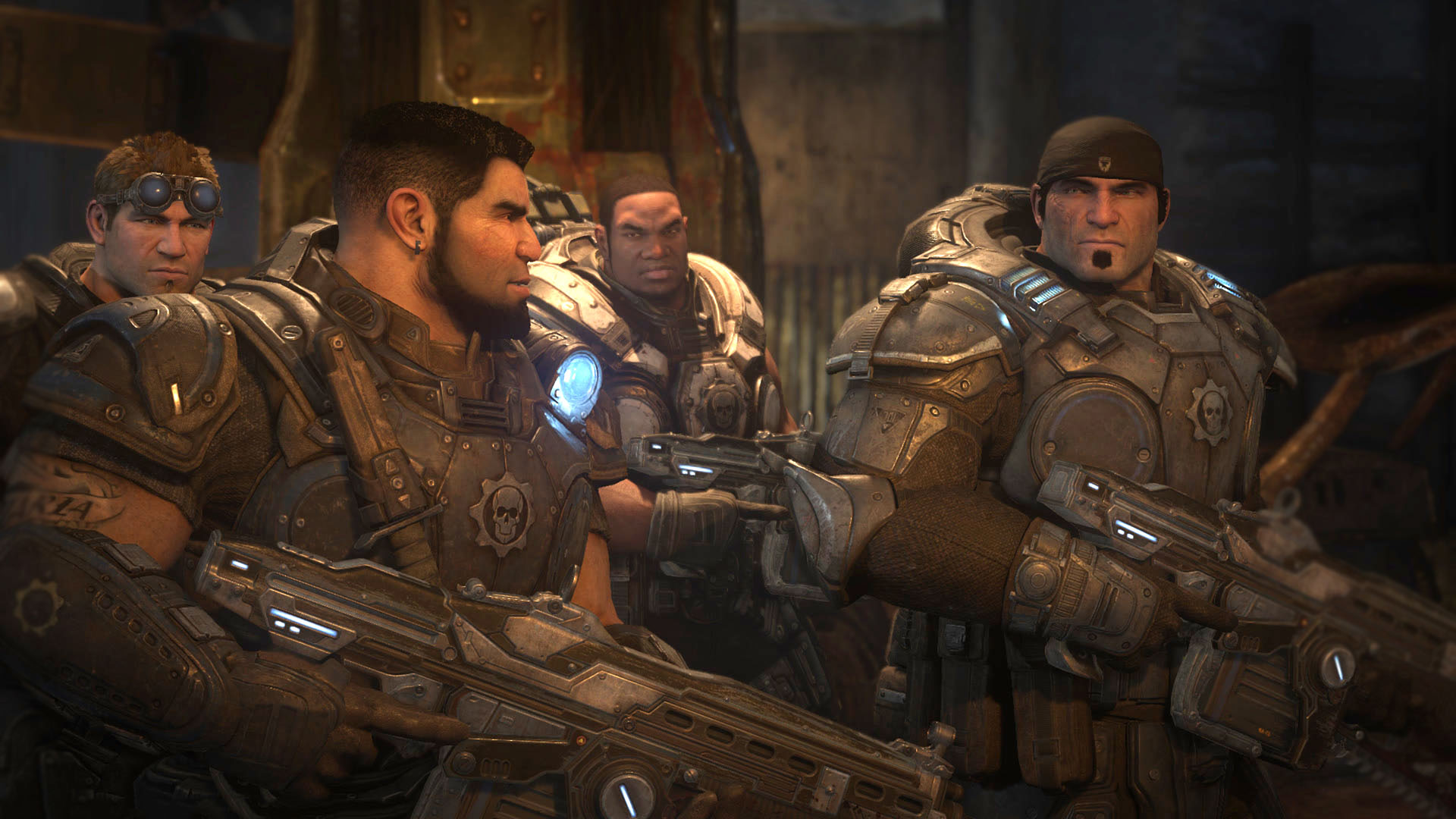 Gears of War is immediately evocative of bro-moments (broments?), bro-talk, bro-kills, and a general bro-ness that was brought on by the near-cuddlefest between protagonists Baird and Dom. Whether you loved the sequels or hated them dearly, there is one thing that is certain – the first title kicked every square inch of our ass. The team at Epic created something bombastic, beautiful for its time, and launched the use of Unreal Engine 3 into the stratosphere. If there was a game I could have wished to have upgraded and brought to the Xbox One, it’d be this one, but would the special breed of gravel-voiced ultraviolence resonate with audiences nearly a decade post-launch?

After purchasing the rights to the Gears franchise from Epic, Microsoft enlisted developer The Coalition (you might have known them as Black Tusk Studios – also the developer for Gears of War 4), to embark on a new adventure in the Gears franchise, but to sate our chainsaw-gibbing-appetite, they’ve also taken a look back to where it all started.

Most remastered games released this generation have been simple reskins of their source material. Graphical retouching and a nudge on the resolution is usually enough to get it out the door for a little double-dip action, but Microsoft wanted so much more than that for Gears. With series co-creator Rod Fergusson being the studio head of The Coalition, it got exactly that. Over 18 months, the team remastered over 3,000 art assets, smoothed the control scheme and brought it current, reworked animation and motion capture, and much more. With a little help from multiplayer masters Splash Damage, they rebuilt nearly everything from the original game, other than the musical score and voice work. Clearly, “Ultimate Edition” isn’t just a tagline to push sales.

Okay, sure the storyline to Gears of War isn’t exactly Tolstoy or Hemingway, but it delivers a story compelling enough to want to keep running forward, chainsaw in hand. If you didn’t double-dip and play it on PC (I did not) you are in for a treat, though — there are 90 minutes of campaign that didn’t make it into the Xbox 360 version that are present and accounted for here. None if it changes the story enough to be a ‘twist’, but it hits the same quality present in the original pass nicely enough.

Speaking of quality, the most obvious upgrade is the visuals. There is no doubt that Unreal Engine 3 powered games had a specific shiny (and occasionally muddy) look that was pervasive throughout. Gears in particular has a people-as-wide-as-a-bus look on top of that, but it’s a look that it embraced wholeheartedly. This Ultimate Edition strips away the waxy look, giving people a more natural tone, even if every bit of their body is still heavily exaggerated. One of the most noticeable places that has been retouched is the rebuilt lipsynch. Sure, Marcus still sounds like the smoked literally all the cigarettes, but at least he doesn’t look like he’s also chomping on them while he speaks as well.

It’s a pretty stark comparision – and an impressive one.

To say that the overall look of Gears of War has gotten a new coat of paint would be completely inaccurate. If you haven’t fired up the original in a while you just might find that nostalgia may have colored your memory. The original, while pretty amazing for its day, was a game built on 256mb of shared RAM to fit on the Xbox 360, and the textures reflected that. The color pallet was riddled with muddy colors and leaned heavily on blues and greys to create the doomed world. The skybox was often a unmoving grey box with cloud cover. On the Xbox One you won’t find anything that hasn’t been lovingly rebuilt in every way. Even dreary piping and debris looks like it was hand crafted for the Xbox One.

Gears may have been a fairly dark and gloomy atmospheric game, but this remaster has an entirely new lighting engine to showcase all of this beautiful texture work. Light shafts from the sky illuminate the city, water looks more natural, and worklights in places like the Gold Rush map cast realistic shadows. It’s still plenty gloomy, but damn does it look pretty while doing it.

One of the marks that The Coalition wanted to hit right out of the gate was a buttery-smooth experience of 60fps at 1080p. I’m happy to report that they hit that mark perfectly, taking full advantage of the hardware in the new platform. If you’ve recently played the original, you’ll likely notice this most often during the cutscenes which have been rebuilt with fresh motion capture to create smoother scenes. Best of all, this silky smooth high resolution and framerate extends to the frenetic multiplayer — I never once saw a single hitch.

I do have to mention that, for all of the gloss and rebuilding that has gone on, there is one area that still needs a bit of tuning — the AI. During specific missions you’ll be asked to behave in specific ways (stay in the light, etc.) and your AI companions may or may not choose to do so, leaving you rushing into danger to drag their stupid ass back to safety. It’s not a problem most of the time, but when it does happen it also happens to be life at its most dangerous.

So what does it mean when this game is billed as the “Ultimate Edition”? Well, beyond the items enumerated above, the game was also remastered to take advantage of the Dolby 7.1 Surround functions of the Xbox One. Additionally, The Coalition tossed out the original controls, using a more modern setup from Gears 3. There are also “Tournament Controls”, pushing the Tac-Com to the A button and using the left bumper for Roadie Run, cover, and rolling. There is an alternate control scheme as well, shuffling curb stomp to the thumbstick, for example. Realistically, most players will stick with the default rebuilt scheme, but tournament players will appreciate the additional options.

One of the complaints people had with the original Gears of War was that the reticule felt inaccurate. There are adjustments for Look, Target, and Zoom sensitivity settings present, as is omnidirectional evade as a toggle. Roll-bounce is alive and well, I see.

Watch out for the bitey and the shooty parts!

If you are a fan of collectables, you’ll find a new option in the Extras menu – comics and concept art. There are five comics, unlocked by finding all 33 COG Tags throughout the campaign. The viewer zooms in on the panels, allowing you to smoothly scroll through the story. It’s certainly better than a lot of e-reader implementations of the same digital content, and a nice motivation to find all of those shiny collectables.

Multiplayer hasn’t just been ported across, but completely retooled. The same bombastic and frenetic action is present, but has been vastly expanded. All 19 maps, which includes all DLC and PC-exclusives, have been included, backed by dedicated servers using the Microsoft Azure infrastructure. This means you’ll always be able to find players near you. Match customization activities have also been rebuilt, adding options like player and weapon respawn, as well as unlockable characters, and the integration of Multiplayer Tac-Com and Enemy Spotting. Coupled with three new game types (Team Deathmatch, King of the Hill, and 2v2 “Gnasher Execution”, it’s clear that The Coalition has taken the best parts from every installment in the Gears franchise and smashed them together to great effect.

In practice, Ultimate Edition’s multiplayer is everything you remember, but a lot more smooth. Maps feel like old familiar friends, and the tactics that worked before continue to be effective now. That is good and bad as the servers are currently filled with people who could perform surgery with a shotgun from a mile away and spend as much time rolling as they do reloading. They have Gears dialed in, and if you’ve not continued to play, you’ll be seeing that respawn screen quite a bit. Maybe I’m just rusty or maybe they are just that good, but it’ll be good to get back into the fray. I experienced no lag, stuttering, or issues, even when playing against a group of players in Brazil. Microsoft and The Coalition have worked out every kink we experienced in the beta a few months ago.

Multiplayer is as bombastic and frenetic as ever.

The icing on the cake has to be the treat that was announced at E3 just a few months ago. Gears of War Ultimate Edition will showcase Microsoft’s backwards compatibility technology, granting access to all four Gears of War titles, allowing them to be played on the Xbox One. Sure, it’ll be jarring to go from this beautiful remaster back to the original textures and resolution, but you can’t deny that four-for-the-price-of-less-than-one is one hell of a deal, allowing newcomers and nostalgic players to revisit the entire story thus far. If that isn’t enough, at some point in the future, this Ultimate Edition will also unlock your access to the eventual Gears 4 beta. As Marcus would say – “Sweet.”

Rebuilt in every way, and unlocking the entire Gears franchise for a value-conscious price, this truly is the Ultimate Edition of Gears of War. Curb stomping is as fun as you remember, but with this much of a rebuild, you have every reason to experience it all over again.

Ron Burke is the Editor in Chief for Gaming Trend. Currently living in Fort Worth, Texas, Ron is an old-school gamer who enjoys CRPGs, action/adventure, platformers, music games, and has recently gotten into tabletop gaming. Ron is also a fourth degree black belt, with a Master's rank in Matsumura Seito Shōrin-ryū, Moo Duk Kwan Tang Soo Do, Universal Tang Soo Do Alliance, and International Tang Soo Do Federation. He also holds ranks in several other styles in his search to be a well-rounded fighter. Ron has been married to Gaming Trend Editor, Laura Burke, for 21 years. They have three dogs - Pazuzu (Irish Terrier), Atë, and Calliope (both Australian Kelpie/Pit Bull mixes).
Related Articles: Gears of War: Ultimate Edition
Share
Tweet
Share
Submit