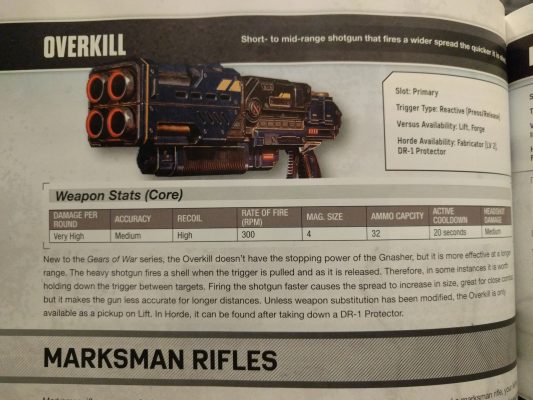 If you’ve read our review for Gears of War 4, then you know we’re pretty excited about it. Travis called it “the Gears revival fans have been waiting for”, awarding it a near-flawless score. Naturally, for a game this anticipated, Prima put together a Collector’s Edition guide to give fans a path to collect every Cog tag, multiplayer ribbon, skill card, and achievement.

It’s hard to believe that it’s been five years since the last Gears of War game. As Epic Games passed the torch to The Coalition, so goes the storyline, updated for a new generation of hardware. As a cross-buy on the PC and Xbox One, the game looks gorgeous on either platform, meaning the various artwork throughout this guide is equally as eye-popping. After a brief storyline setup, the guide gives a quick look at the major characters in the game and steps directly into Basic Training.

Basic Training gives a general overview of the game’s mechanics and controls from an Xbox One controller’s perspective. It also gives a brief introduction on how to use high and low cover, as well as how you might dig enemies out of the same defenses. There are also lessons in curbstomping, active reloads, melee combat, meatshields, and the various implements of war including the lancer, Gnasher, Boomshot, and quite a few new toys I won’t spoil for you.

All new weapons join their familiar and dangerous friends

Heroes and weapons aside, the guide opens up for another eight pages, showcasing some of the more common enemies you’ll encounter in the course of the campaign and multiplayer aspects of the game.

One of the best aspects of this guide is that it is as close to spoiler-free as possible. Other than giving you a general setup and ensuring you can find any nearby collectables, the Gears of War 4 Prima guide works hard to avoid spoiling the storyline. It means that the enemy guide is non-exhaustive, and some elements are purposely vague, but it’s all still richly detailed and deeply descriptive. Alongside large maps and pictures of what to look for are paragraphs of descriptive text to help guide you to the right locations to find every morsel of story and every collectible bauble.

110 pages of the guide are devoted to the single-player campaign, but there are new multiplayer modes to tackle. Four new techniques are added to your arsenal in multiplayer, including the vault-kick, yank-pull, and new executions. These, combined with half a dozen new weapons create entirely new tactics for the tried-and-true multiplayer modes, as well as Horde 3.0. The Prima guide covers all aspects of these new skills and toys, as well as an overview of all of the multiplayer modes, the experience and leveling system, movement and combat tactics, some of the cooperative aspects of Gears 4.

The next generation of COG soldiers.

Beyond these basics, the guide dives headlong into a host of stats, pictures, and descriptions of every weapon you’ll wield in multiplayer. While these are obviously subject to balance changes in the future, it does give you an idea of which boomstick will gib your foes in spectacular fashion.

All eight multiplayer modes, and the initial load of ten maps, are all described, pictured, and presented, showing spawn points, specific important hotspots on the map, and how you might exploit them. While it’s no substitute for walking the map yourself, it does give a great bird’s eye view of the play space.

Horde 3.0 is an intense cooperative gameplay mode, featuring ever-more-dangerous waves of foes looking to put your team in the ground. Over the last few games, this mode has evolved, with this new iteration perfecting the formula nicely. Success now rewards the player with experience that can be used to level up, with medals awarded for specific actions. Prima could have gone the cheap route and just given us an Excel sheet describing these ribbons, but they went one step further, spending ten pages on pictures of the ribbons, descriptions on how to obtain them, and what amount of XP you’ll earn for their receipt.

Multiplayer map briefs can help you learn the ropes.

Like the single-player section of the guide, the multiplayer section goes over the enemies you’ll face, weapons available, and tactics you might use against them. Added to this pool is a full rundown of the augmentations skill cards provide, bounties available for collection, and how to use the fortification system to craft things like turrets, decoys, and barriers. It’s all delightfully complete, providing a great overview of the new mode and how you might succeed on the side of good or evil.  Check out a demonstration of each mode in these video excerpts from Travis’s review.

The hardbound guide (with great understated cover art) spans 320 pages, including a few ads in the back of the guide for a sweet-looking lancer rifle replica, shirts, hats, and other Gears merch. Before it closes out, however, there is everything a min/maxer might want, including detailed charts of where to obtain every character and weapon skin in the game, as well as all of the available achievements.

These things are AWESOME.

Prima retails the Gears of War 4 Collector’s Edition guide for $49.99 (though I’ve seen it cheaper on Amazon), and much of that extra cost comes from the awesome pack-ins beyond the expansive guide itself. The Collector’s Edition comes with two in-game gear packs, two tracks (Stealth and Aspho Fields) from composer Ramin Djawadi’s (composer for Game of Thrones) Gears of War 4 official soundtrack, eGuide codes for Gears of War 1, 2, 3, and 4, and some heavy steel replica COG tags.

The COG tags are sturdy steel, already looped through a silver bead chain. They are both stamped with the Gears of War logo on one side, but one tag says “2016 Microsoft” on the back, with the other being more meta with “Property of the Coalition of Ordered Governments” on its opposite side. While calendars like the one included with the Mafia III Prima Collector’s Edition are cool, COG tags like these are the sort of geek-merch I love to collect.

The Gears of War 4 Prima Collector’s Edition guide is thorough and detailed, yet concise and spoiler-free. With a full walkthrough for the campaign and a great overview of the many new aspects of multiplayer and Horde 3.0, the guide alone is fantastic. Throw in three extra eGuides, two tracks from the OST, two bits of multiplayer-boosting consumables, and a pair of high-quality replica COG tags and you have a must-have for any Gears collector

Ron Burke is the Editor in Chief for Gaming Trend. Currently living in Fort Worth, Texas, Ron is an old-school gamer who enjoys CRPGs, action/adventure, platformers, music games, and has recently gotten into tabletop gaming. Ron is also a fourth degree black belt, with a Master's rank in Matsumura Seito Shōrin-ryū, Moo Duk Kwan Tang Soo Do, Universal Tang Soo Do Alliance, and International Tang Soo Do Federation. He also holds ranks in several other styles in his search to be a well-rounded fighter. Ron has been married to Gaming Trend Editor, Laura Burke, for 21 years. They have three dogs - Pazuzu (Irish Terrier), Atë, and Calliope (both Australian Kelpie/Pit Bull mixes).
Related Articles: Gears of War 4 Prima Guide
Share
Tweet
Share
Submit