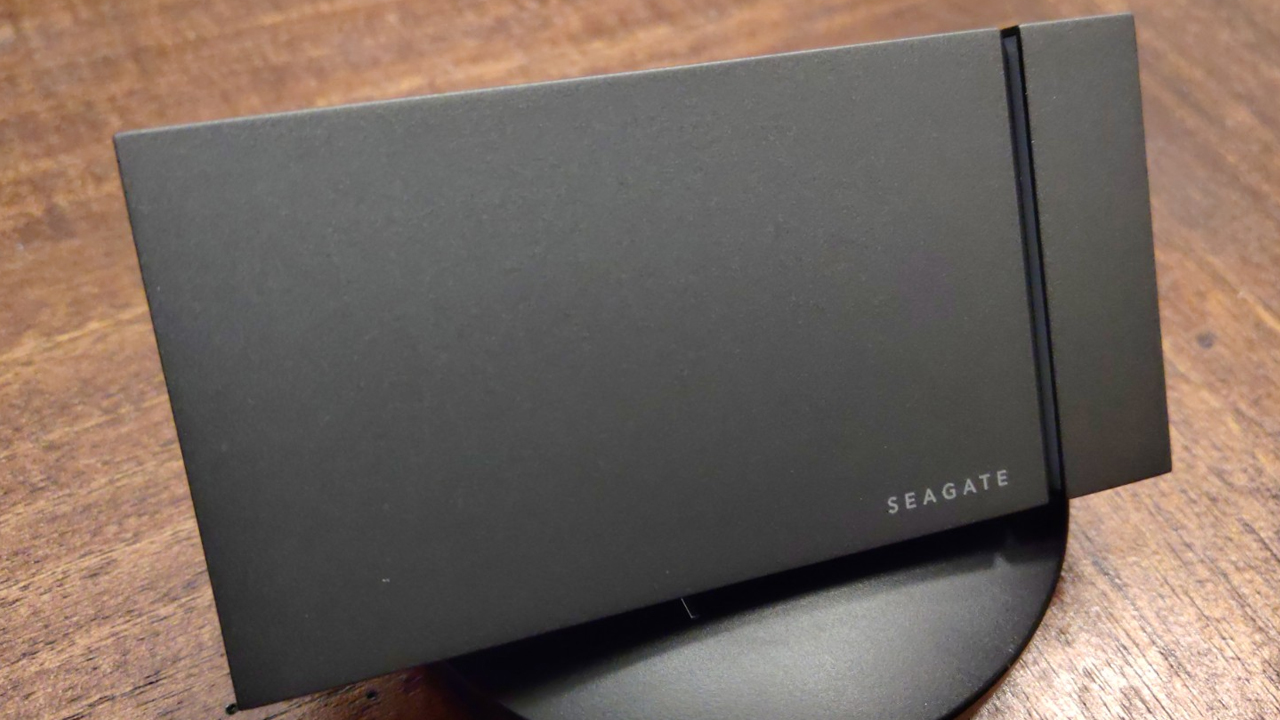 You can pick up a portable SSD just about anywhere. We’ve reviewed quite a few of them, including the Game Drive for the Xbox One (review), but anyone who has kept up with the PC market knows that the real power isn’t just SSD, but NVMe. While a standard SSD over USB can handle upwards of 500 MB/s, internal m.2 form factor NVMe drives can deliver what can only be described as shocking speeds at nearly 4000 or 5000 MB/s, depending on the chipset. What if we could combine the portability of an external drive with the power of an internal NVMe chip? The FireCuda Gaming SSD is exactly what happens.

The first test I ran against the FireCuda Gaming SSD is unconventional, but yielded surprising results. I use a Razer Phone 2, which has a USB-C connector for charging and connectivity, so I thought I would plug in the drive. Immediately the phone not only recognized the drive, but offered to format it. Just a few seconds later I had a full speed 1TB storage device connected to my phone! Sure enough, not only was I able to copy music and movies to the drive, but the phone had no problem accessing and playing them. While I doubt Seagate intended that this device would be used for high speed phone storage, it works surprisingly well.

If you are confused by the USB 3.0, 3.1, 3.2, 3.2 Gen 2, and 3.2 Gen 2×2 naming conventions set by the USB Implementers Forum (USB-IF), you aren’t alone. Put simply, it’s a horrible mess that only serves to confuse consumers. Worse still, there are more updates on the horizon with the freshly-announced USB 4.0. First off, let’s start with a simple chart of where we are today.

As of right now, very few boards have the ASmedia 3241 USB controller (e.g. MSI TRX40 ($699.99), and MSI Z490 MPG ($269.99)) to support the 20Gbps dual-PCI lanes needed to pull the full speed of drives like this FireCuda Gaming SSD. There is an add-in card from Gigabyte, but despite being announced in November of 2019, it’s nowhere to be found. Even my brand new Razer Blade 15 (2020) has USB 3.2 ports, but they are Gen 2, not Gen 2×2. This means I can, at best, expect just half of the speeds this drive is capable of delivering. While that’s frustrating on paper, the reality of the situation is quite a bit different.

Before we get to benchmarking, it’s worth noting that form factor and interface are not the same thing. SSD stands for Solid State Drive, but how they interface with your motherboard has a great deal to do with the speed you can wring out of them. SSDs in a 2.5” hard drive factor can deliver 550 MB/s via SATA III’s internal connection to the motherboard, or via a USB 3.2 connector like we see in this review of the Seagate Game Drive for the Xbox One. The M.2 interface is a direct connection to the motherboard via either an integrated slot on the board itself, or via an add-in card, capable of delivering speeds anywhere from 2000 to 5000 MB/s, like we see on the FireCuda 520 (our review). While Thunderbolt 3 is a very real challenger to these numbers, that’s a conversation for another day. Let’s figure out where the FireCuda Gaming SSD fits in all of this. 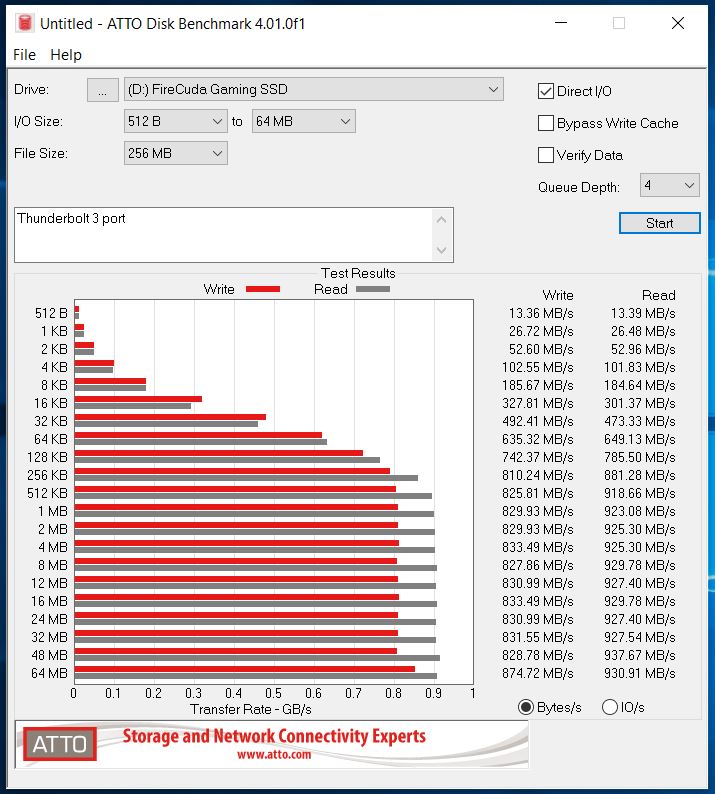 If you’re like me, you’ve got a desk drawer full of miscellaneous USB sticks. I’ve got one from Stardock, another from Sega, and I even have a bullet-shaped one from EA’s launch of Medal of Honor 2. Without doing a deep dive, I can’t readily tell you how fast any of them are or what size they are — USB sticks tend to stack up and collect dust. The problem is that technology waits for nobody, and it’s probably well past time to throw some of these away. Moving a game like Red Dead Redemption 2 from one device to another requires just a shade over 100GB, and I’ve only got one 128GB thumb drive that fits the bill, and it runs at speeds around 160Mb/s. That file copy, if everything goes without a hitch, takes upwards of an hour and a half to copy to the drive, and another hour and a half to copy back to the target device once moved. Given that you could most likely download the whole game again in half that time, it seems a pretty unrealistic way to get things done. That’s where the FireCuda Gaming SSD earns its stripes. 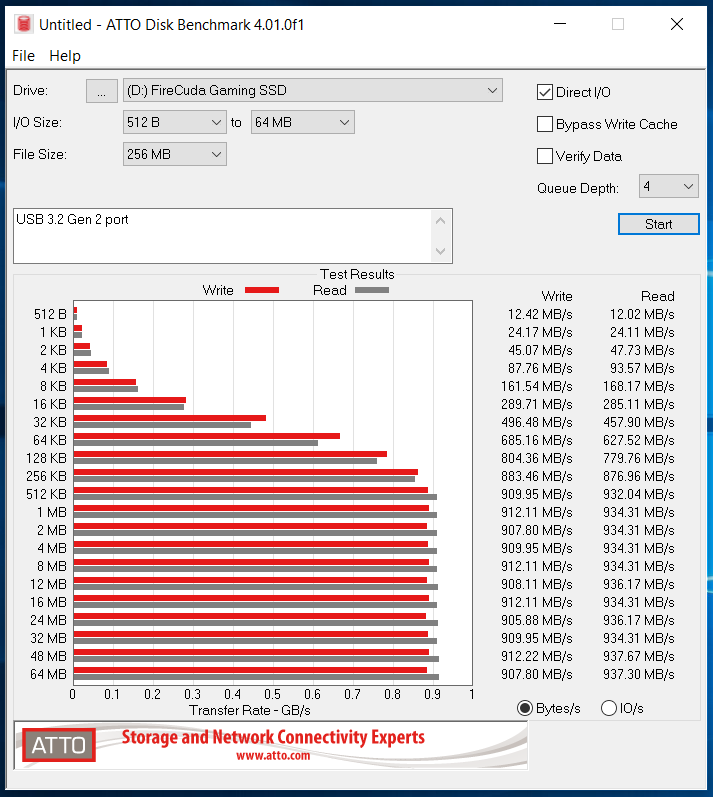 If you’ve got one of the aforementioned USB 3.2 Gen 2×2 ports, this drive is capable of delivering 2000MB/s in both read and write speeds. That same Red Dead Redemption 2 file copy would take just over 6 minutes, instead of an hour and a half. Copying it back to its destination would again take just 6 minutes. If you are in my situation and limited to a USB 3.2 Gen 2 port, simply double it as you’ll be limited by the port speed to 1000MB/s. I say “limited” but when you can accomplish something seven and a half times faster, it hardly seems like a limit. 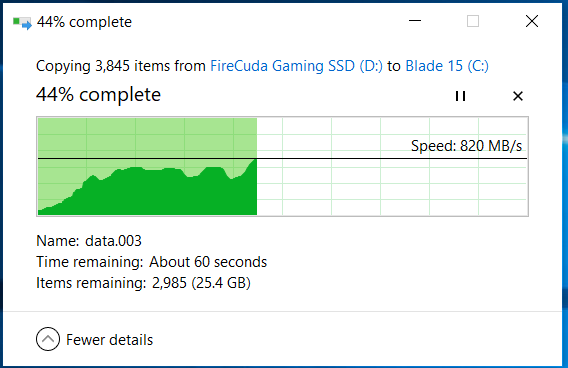 So what if you are using a Thunderbolt 3 port? Well, you are in luck — that port is capable of delivering nearly identical speeds, as you can see below.

In terms of form factor, the FireCuda Gaming SSD is not a standard 3.5” drive size. Instead, Seagate moved to a slim M.2 form factor drive encased in a chiseled metal enclosure measuring just 0.39” thick, just over 4” in length, a little over 2” wide, and weighing in at shade over 4.5oz. Said another way, the FireCuda Gaming SSD is roughly the size of two slim thumb drives side by side. As of this review, it comes in three sizes — 500GB ($199), 1TB ($279), and 2TB ($499). This puts it right in line with the price of an NVMe drive like the FireCuda 520, with just an extra $10 difference for the portable form factor difference, but slightly above an external device and drive that you’d assemble yourself. That said, I haven’t seen a single DIY solution that functions at USB 3.2 Gen2x2, so the little bit extra is more than worth it. 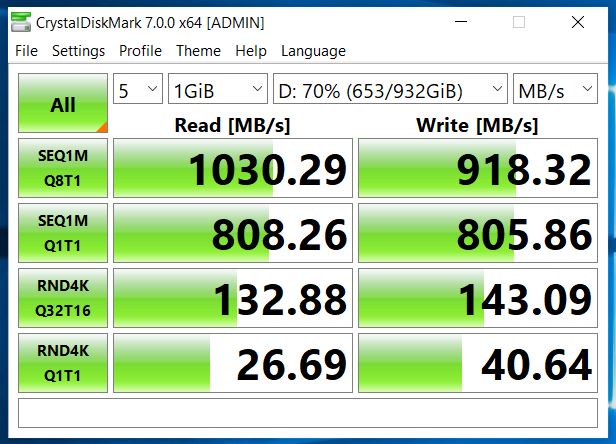 So it’s obvious that this device makes for an excellent way to move files around, but it is, after all, named the FireCuda Gaming SSD — let’s load some games on it and compare some load speeds.
To test, I picked four of my favorite games — Red Dead Redemption 2, The Witcher III: Wild Hunt, Forza Motorsports 7, and Assassin’s Creed Odyssey. Each of these games features heavy streaming from the hard drive, meaning that loading textures quickly is of paramount importance. To test, I rebooted the system, loaded the game from the internal hard drive and measured the time to the menu, moved the games to the FireCuda Gaming SSD, rebooted and then tested it again. I repeated this loading sequence three times to ensure I had a valid result.

So with all of this said, why would you want to buy a new hard drive so close to the end of a console generation? Well, on the rear of the Xbox Series X lies two USB-A ports marked SS. If you look back at our chart above, SS stands for “Super Speed”, meaning they are at least 5Gbps, but could be up to 20Gbps throughput — Microsoft has simply announced it as “USB 3.2”, which we know is vague at best. Still, what this means is that this drive is forward compatible. Where a standard SSD might give you 550MB/s, this drive could deliver twice that, and if we are lucky, upwards of 2000MB/s. We’ll have to wait and see, but it’s nice to buy something that’ll have some legs to it six months from now. As for the PlayStation 5, at this point we know nothing about the console’s ports, other than it uses USB-C for charging the new DualShock 5. That said, I’ll eat my hat if Sony isn’t highly compatible with this drive as an external high-speed storage device. 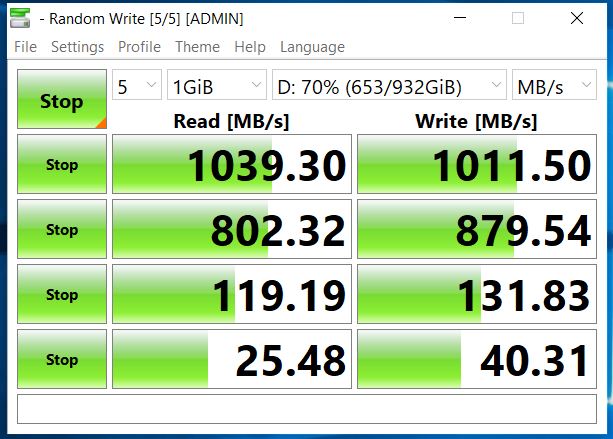 All of the “lights make it go faster” jokes aside, the FireCuda Gaming SSD does feature a small LED strip across the bottom third of the device. Using the included software you can select between three custom profiles, setting up to six colors, how fast they blink, and how long each color holds active. The default settings gives you a “breathe” option (set it in intervals between 0.4 seconds all the way to a minute and 42 seconds between “breaths”), Blink (toggles on and off with intervals of 0.2 seconds out to 51 seconds between blink, and Spectrum which simply rotates through all six selected colors of the 300 available. These can be synchronized with the Seagate FireCuda Gaming Dock, but without one of those to test, I’ll have to make the assumption that it’s awesome. 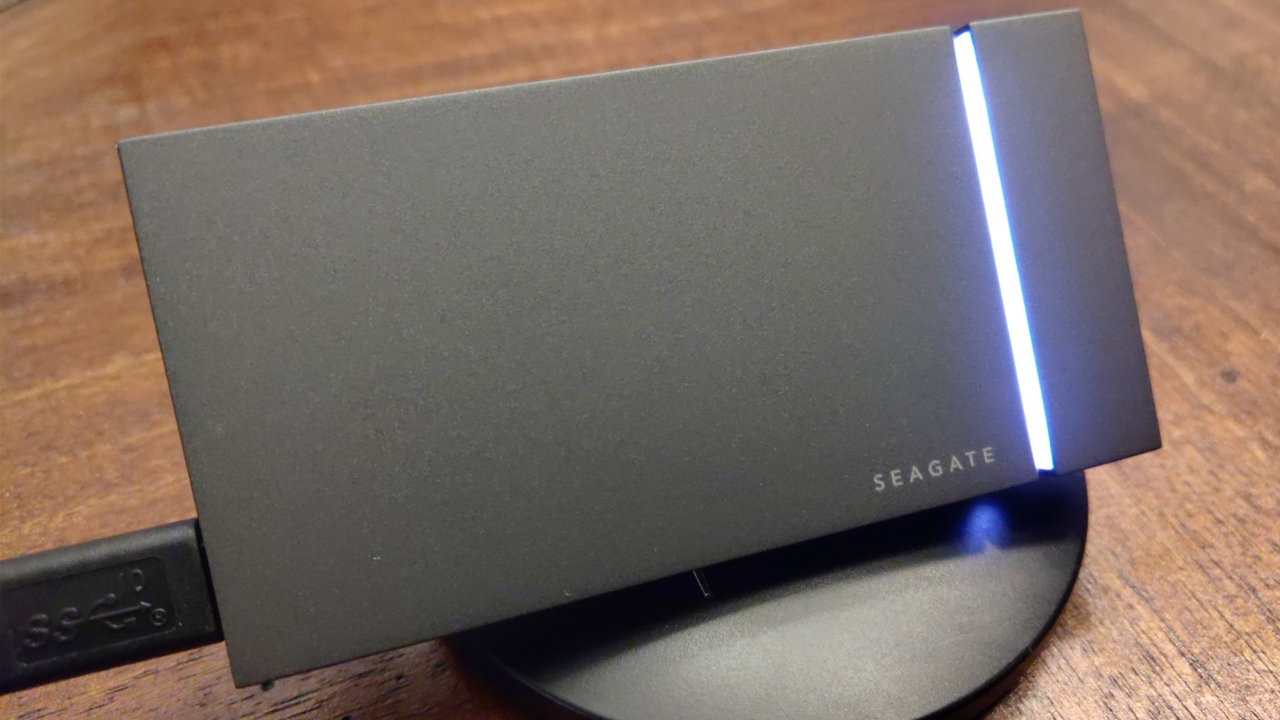 One of my largest complaints with hard drives, SSDs, and M.2 drives is that their warranties are all over the place. I’ve seen as low as 90 days, with a 1 year being the most frequent. Put simply, that’s just unacceptable. Historically, SSDs and M.2 drives have had shorter warranties despite having no moving parts. Seagate is bucking that trend by offering the same 5 year warranty they offer on all of their hard drive products. This gives me peace of mind that my data (or in this case, precious save files) will remain safe for the usable life of the drive.

The FireCuda Gaming SSD is blisteringly fast for modern use cases, will double in speed as more devices embrace USB 3.2 Gen2x2, and will likely remain the highest possible portable speed choice for the foreseeable future.

Ron Burke is the Editor in Chief for Gaming Trend. Currently living in Fort Worth, Texas, Ron is an old-school gamer who enjoys CRPGs, action/adventure, platformers, music games, and has recently gotten into tabletop gaming. Ron is also a fourth degree black belt, with a Master's rank in Matsumura Seito Shōrin-ryū, Moo Duk Kwan Tang Soo Do, Universal Tang Soo Do Alliance, and International Tang Soo Do Federation. He also holds ranks in several other styles in his search to be a well-rounded fighter. Ron has been married to Gaming Trend Editor, Laura Burke, for 21 years. They have three dogs - Pazuzu (Irish Terrier), Atë, and Calliope (both Australian Kelpie/Pit Bull mixes).
Related Articles: FireCuda Gaming SSD, Hardware
Share
Tweet
Share
Submit