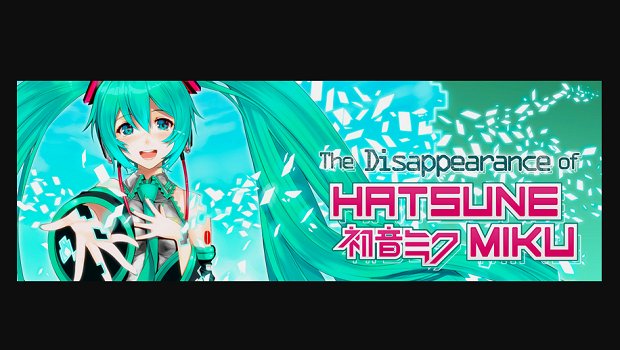 There are two universal languages in the world: mathematics and music. In Japan, Vocaloid has made thousands of songs using synthetic voices and sounds. The most popular model is Hatsune Miku, who has gotten international attention as well as quite a few video game appearances. While music-based video games (and even music-based movies) are nothing new, Muya Agami, in collaboration with [email protected], has set out to create a novel based upon one of the most popular (and hardest) Vocaloid songs in Japanese history. The Disappearance of Hatsune Miku is a solid light novel with a few surprisingly heartfelt moments sprinkled within the pages.

The Disappearance of Hatsune Miku revolves around the life of Shinosato Asano, a reserved university student that works at a research lab and part time at a nightclub. One day, his professor assigns him a mysterious task: he must conduct a field test for an android named Hatsune Miku. While the task is open-ended, Asano initially struggles to interact with the robot, and it doesn’t help matters when his friends Kurose Aika and Ishiii Juhachi wonder what he’s doing with a girl who looks like a fish out of water. Within a couple of weeks, however, Asano and Miku form a bond as they become intertwined with each other; however, Miku holds some devious secrets that may change Asano’s life forever.

The novel’s chapters are separated by date and time, with the main story focusing on Asano’s point-of-view. His first interactions with Miku are weird and jilted, but it’s understandable due to his somewhat timid personality. He struggles to open up to her, and his character development is actually quite heartwarming, if somewhat tragic near the end. In addition, I really enjoyed the supporting cast of Asano’s friends; Aika is the resident shipper-on-deck who provides some comic relief, while Juhachi is the tough guy dropout that’s sometimes too confident for his own good. The trio play off each other’s personalities really well, and I love the best friends dynamic they share.

It was quite interesting to see how the author portrayed Miku (who doesn’t have a canon personality due to her being, well, synthetic). Here, she’s peppy and charismatic, attracting those around her with her  signature outfit and singing voice. Near the end, however, her character morphs into something more robotic and stoic, which marks the change of tone in the novel. The story does reference some of the more well-known aspects of her character (such as her trademark hair and food, as well as the fact that she had multiple “voices” in an update to the Vocaloid software). While many liberties are made in order to explain the technology to create her, the story does note her limitations as an android.

The most remarkable thing about Disappearance was how the authors could extrapolate so much story out of a single song. [email protected], the artist who created the eponymous song, took great lengths to explain the true meaning behind The Disappearance of Hatsune Miku. Essentially, the song marks Miku’s existential crisis as she “dies” throughout it, slowly losing control as well as her memories. To be fair, the song is filled with motor mouth exposition, as this English cover demonstrates, so it’s not like there’s a scant amount of lyrics here.

While Disappearance does move at a brisk pace due to the medium, the first third of the book was a bit slow to build up. We get the generic “boy meets girl” plot for the first eighty or so pages, with Asano struggling to come up with activities to do with Miku, and coming up with increasingly absurd reasons as to why he’s hanging out with her. By the time the story moves out of the introductions, however, it really picks up, with the second half correlating to the events of the titular song.

When the overall novel shifts from a romantic slice-of-life to a science-fiction drama, it becomes much more thrilling. However, near the end it starts to go into a slight cosmic horror plot, which doesn’t mesh well with the rest of the story. It comes out of nowhere, and the resolution appears just as quickly. Keeping the story firmly into softer science-fiction/slice-of-life territory would have been preferable to the last dozen or so pages. A small point to note with the translation is that it does contain a few grammatical errors at times. They’re noticeable but not dealbreaking; still, it’s something that should probably be tightened up in future printings.

The Disappearance of Hatsune Miku

While a bit inconsistent with translation and pacing, The Disappearance of Hatsune Miku is a poignant and heartwarming light novel that explores Japan’s virtual pop superstar in a surprisingly human way. Just make sure to bring tissues near the end of it.

Elisha Deogracias is an aspiring accountant by day, freelance writer by night. Before writing for Gaming Trend, he had a small gig on the now defunct Examiner. When not being a third wheel with his best friends on dates or yearning for some closure on Pushing Daisies, he's busy catching up on shonen manga and wacky rhythm games. Mains R.O.B. in Smash. Still doesn't know if he's a kid or a squid.
Related Articles: Beyond the Page, The Disappearance of Hatsune Miku
Share
Tweet
Share
Submit