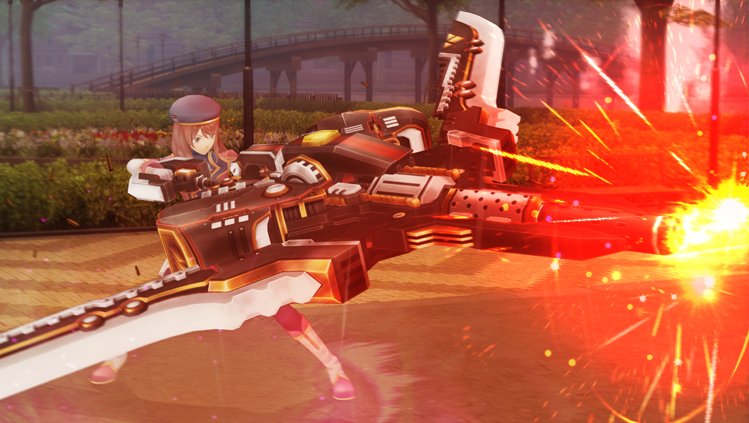 It is rare for a modern JRPG to stray too far from the formula, and the result is a stagnation that is staining the formerly rich and deep genre. Many point to content shifts away from “legendary adventures” towards a more comical style, but a more powerful detriment to the genre is a simplification that turns towns into menus, adventuring relegated to moving space to space on a big board, and cutscenes becoming stick puppet shows.

Dark Rose Valkyrie bucks these trends well, but not entirely. A capable and fun battle system reminiscent of Dungeons & Dragons style “actions” combines with a nice overworld to traverse and adventure through. There is plenty to the game that feels rehashed, but the overall product is adequate and should be looked at as, at the very least, the template for a simple JRPG moving forward.

A virus is spreading throughout Japan, taking people with it in huge numbers. Asahi, a young nebbish captain in Special Force Valkyrie is enlisted to lead a group of mostly female soldiers in the war against the virus, Chimera, and the people it has infected. The group must work together to eradicate the virus and fight off the monsters in their path.

The story is not weak, but it isn’t captivating in any way. It serves as just reasons to go out and explore and fight, and doesn’t really stand out on its own. The characters are mostly archetypes you’ve seen before, but they have a bit more depth and are less cliched than you’d expect with other Compile Heart titles. There just isn’t much to be said here, and while it’s not groundbreaking, there is a market and audience for it.

The world is large, and you are able to explore from a homebase out each time you venture. The world branches out into several different zones, and the further you go, the more difficulty you’ll encounter. Special markers are unlocked along the way, allowing for fast travel. While certainly not “open world”, the game has the feeling of true exploration, as opposed to a series of levels.

The battle system is very fun and has a timing aspect to it that allows for a lot of strategic decision making. The party, up to four members, and enemies are on a line with four spots at the top. Based on the attack you choose, you’ll execute that attack at spot 1, 2, 3 or 4. Stronger attacks can take longer to load up, meaning an enemy may get an attack off on you before you can strike, but quicker attacks may leave you vulnerable to attack after yours is executed.

The battles are fluid in action, so when you attack, the sliding attack order is still moving, and other characters and enemies may begin their attacks at any time, rather than waiting patiently one-by-one. This can bring you plenty of opportunity to chain attacks together, but it means you’ll always have to be paying attention to where you are in the order.

I found that the game isn’t very difficult at any time, so the strategy doesn’t feel as pertinent. However, as the game progresses there are more and more instances where some smart thinking can get you through an otherwise hopeless battle. Overall, I love the way the battles flow and find a lot of fun in the various attacks and their timing.

I find that the level of complications with this game can be a bit overwhelming, as it seems there is a ton of secondary options, and special attack situations and other task that are fun, but can be a bit much.

The graphics are pretty, a lush realistic look dotted with anime characters and fantastical beasts. The city that you start your explorations in isn’t the most attractive you’ll ever see, but once you get past that area you’ll be pleased with your surroundings. The animations are crisp and smooth throughout. I can’t say much about the music except that it exists, but at this point, the music for these Compile Heart games all bleed together, which means it’s competent but mostly unspectacular.

Dark Rose Valkyrie doesn’t blow the doors off the hinges, but it does serve as a much improved JRPG over what has been a largely tepid series of releases from Compile Heart and others. The story is fine, the battle system is fun and unique, and exploration is a large part of the adventure. While there are some cliches and rehashed elements throughout, Dark Rose Valkyrie represents what a top end-formulaic JRPG can be.

Patrick Rost has been with Gaming Trend since 2013. At first focused on sports coverage, Patrick has gone on to cover a wide range of games and other products for the website. Outside of Gaming Trend, Patrick writes and records music, grinds perpetually in Elder Scrolls Online (PS4), and lives day to day with his two dogs, Bob and Stella.
Related Articles: Dark Rose Valkyrie
Share
Tweet
Share
Submit