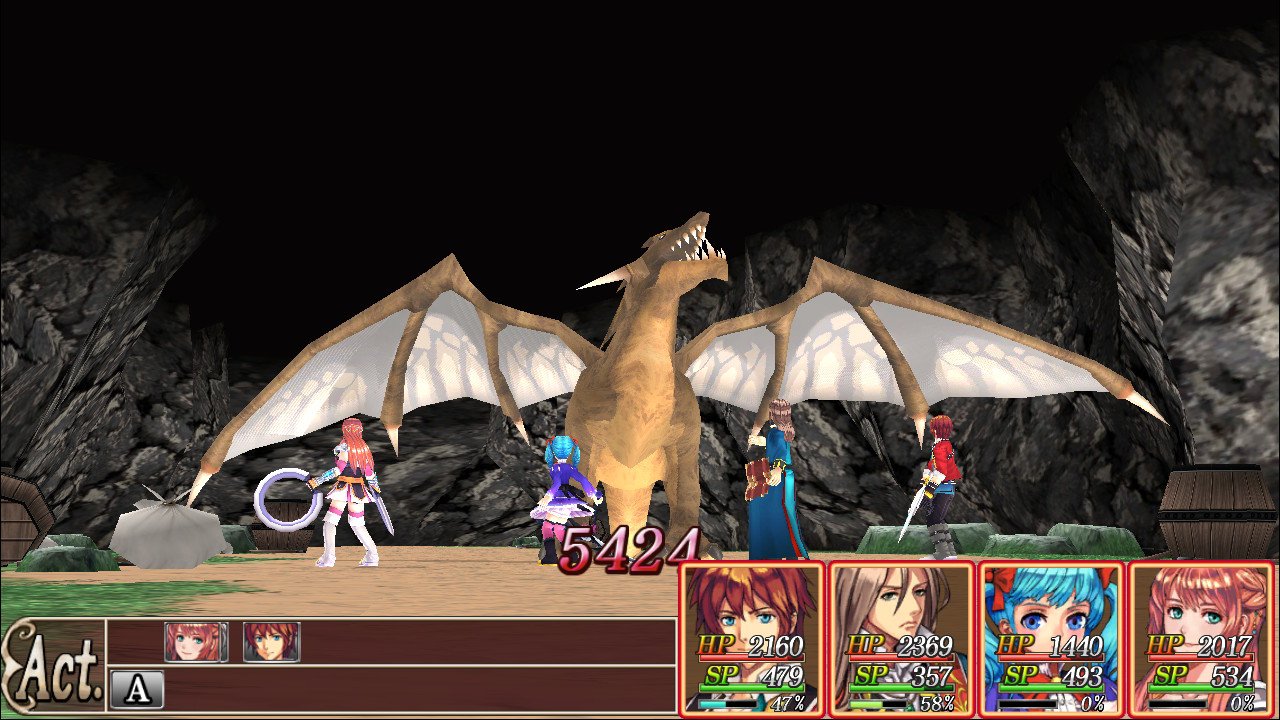 I feel like Kemco games are like fast food: they’re not the best at what they do, but they’re enjoyable and I always feel myself coming back to them for a bite here and there. As much as I criticized Mom Hid My Game! earlier in the year, I still liked my time with it. It’s with this mindset that I went into Revenant Saga, a Switch port of a retro-styled mobile JRPG. It has a host of problems, but in the end, I came out of the experience enjoying it.

Revenant Saga starts out with our protagonist Albert’s hometown getting wiped out due to a mysterious plague. It seems that demonic creatures known as revenants are terrorizing the world, and unfortunately for him, he gets one such creature transplanted into him after unwittingly accepting an offer from a scientist. What follows is a tale of revenge and adventure, as he meets up with the rest of the party: Bruno, a devout follower of a religious Order, Esther, a Valkyrie-in-training, and Julia, a little girl with a mysterious past.

While going into more details would be a bit of a spoiler, I did enjoy the story for its character development. For the first two-thirds of the game, each character keeps secrets about their past from the others, and while the player will know the thoughts of the party, it’s the dramatic irony and tension that could dismantle the group at any time that kept me engaged. For example, early in the game Albert meets Bruno and Esther, who are determined in killing anyone possessed by a revenant. These two would obviously endanger Albert and Magus (the revenant living inside of him), so he vows to keep quiet. I also enjoyed the inner turmoil of Albert’s character and how it affects the others.

That’s not to say the narrative is perfect; after the plot twists are revealed near the end of the game, it unfurls into a rather generic “save the world” plot for the last couple of hours. There’s also the fact that the action slows down every so often with mounds of unvoiced dialogue and cutscenes, so prepare to kill the flow of the gameplay if you want to read everything the game has to offer.

While the story is an overall treat, the rest of the game is a mixed bag. Combat is pretty enjoyable; while the overworld and in-game maps are in 2D, battles take place on a 3D setting, where your party can either choose to attack, use skills, or guard. You also have a timeline on the bottom of the screen where you can see who will take the next action. This is especially important since characters and enemies alike can cast spells or use attacks that can affect this timeline, so keeping track of your options is the best bet here. The most innovative tactic in Revenant Saga is the transform feature, where each character can transform in order to increase their strength and cast powerful skills that aren’t available normally.

However, when in this state, you can’t heal HP and if you die, you can’t get revived until the end of the battle. To complicate matters even more, you also have a synchro gauge that fills up when you take damage or spend too much time in the transformed state. This will basically cause a rage-like status where you are unable to control your character but are stronger as a result, so it’s a nice balance instead of mindless fighting. You can also set tactics for the AI if you want to skip ahead and do auto battling, which works for the most part (though my spellcaster Bruno tended to use my most expensive SP replenishing items when using this mode). The rest of the mechanics are rather simplistic, from burst attacks that can dole out extra damage randomly to different types of enemies that are weak against certain skills.

While the combat can be intensely satisfying (especially at the end and post-game, where enemies start putting up a fight), the whole package unfortunately feels super generic and unpolished. The graphics want to emulate the 16 and 32-bit JRPGs of old, and it shows. The sprite work is adequate, but the in-game battles look like mid PS1-era gameplay, and you can notice the jarring decrease in quality when playing the game in docked mode. Sure, the game runs fine enough, but the jagged textures and lifeless movements of the models can put a drag on the experience. The music is just as generic, but nothing offensively horrible, so I didn’t mind when jamming to it on repeat. Everything is voiceless as well (which is fine, as the game was a mobile port to begin with), but this does feel a bit monotonous when you get bombarded with cutscenes every so often.

Dungeons are cool, but like towns, can feel a tad generic.

The other design choices are rather linear too. There wasn’t a time in the game when I felt like I wanted to go back to a town or dungeon, and while a world map does open up, you’re basically restricted from exploring until the very end. It doesn’t help that most towns (and townspeople) look similar, so these rest segments felt like padding rather than a nice exploration. The main campaign lasts around 12 hours (with some post-game material opening up after the final boss), so don’t expect to grind for dozens of hours on end. I really wanted the game to last at least double my runtime, as the combat alone was a fun little way to kill a few minutes here and there.

Revenant Saga is a by-the-numbers JRPG that will scratch your itch for a portable 90s-esque game with its charming characters and entertaining turn-based combat. However, those that want a meatier role-playing experience should look elsewhere for their fix.

Elisha Deogracias is an aspiring accountant by day, freelance writer by night. Before writing for Gaming Trend, he had a small gig on the now defunct Examiner. When not being a third wheel with his best friends on dates or yearning for some closure on Pushing Daisies, he's busy catching up on shonen manga and wacky rhythm games. Mains R.O.B. in Smash. Still doesn't know if he's a kid or a squid.
Related Articles: Indies, Revenant Saga
Share
Tweet
Share
Submit