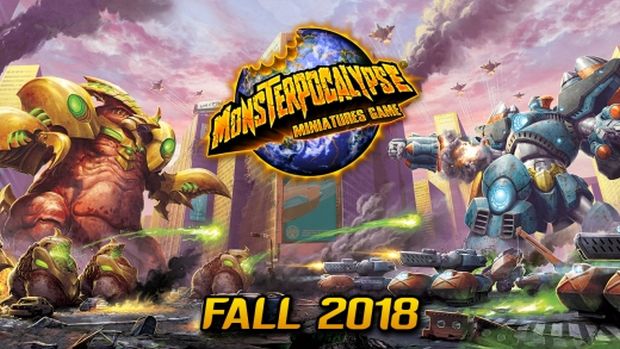 While Privateer Press is known mostly for their Warmachine and Hordes figures now, a while ago they also had the Monsterpocalypse line.  It fell dormant several years ago, but Privateer Press has announced they are bringing it back in a big way later this year.

Privateer Press has announced that it will be releasing a new hobby miniatures game this fall based on its Monsterpocalypse property, which first appeared as a Collectible Miniatures Game in 2008. The game centers on two or more giant kaiju monsters that brawl, blast, and body-slam each other in a dense destructible urban environment. Alongside these towering monsters, lesser minions, such as powerful tanks, fighter jets, flying saucers, fearsome dinosaurs, and demonic fiends fight to capture important locations and help power their monster to victory.

The game will feature two different Agendas players can choose from when building their armies: the noble Protectors, who want to save the world and the creatures that inhabit it from destruction, or the evil Destroyers, who seek to enslave and destroy the Earth for their own diabolical purposes. Both Agendas feature three different Factions, each with its own unique monsters and units. Players can freely mix and match any models from the Factions within their Agenda when building their army. The game will launch with two different one-player starter sets, one for each of the two Agendas. These starter sets will be expanded by Monster, Unit, and Building packs, which will contain new models for players to use in their games.

The Monsterpocalypse Hobby Miniatures Game represents an updated and streamlined second edition of the original 2008 collectible game’s rules. Additionally, instead of using pre-painted collectible figures to play, the new game’s most noteworthy difference is its use of highly detailed resin and metal hobby miniatures, which players get to assemble before playing. As a hobby game, this upgrade to the Monsterpocalypse experience provides the opportunity for players to customize their armies through painting and modeling them.

“It’s been ten years since Monsterpocalypse first smashed its way onto the gaming scene and finally gave players all over the world the chance to play out the gigantic monster-on-monster, city-leveling brawls we all dreamed about as kids,” said Privateer Press Executive Director William Shick. “After its long hiatus, we are absolutely thrilled to finally be able to bring back the game bigger and better than before. The change from pre-painted figures to full-fledged hobby miniatures game gives us the opportunity to realize the towering monsters, cool units, and dense urban arena these forces do battle in with the same detail and quality our WARMACHINE and HORDES miniatures are known for. And while the game will feel familiar to any veteran players, we’ve streamlined and simplified gameplay to make it faster as well as easier for new players to pick up.”

They are going to make Monsterpocalypse a full hobby game, as the figures will need to be assembled, painted, and customized by you.  The good thing about Privateer Press is they have always been very consumer friendly, and the hit on the wallet isn’t nearly as bad as figures from other miniatures companies.  You can find out more information about the reboot here.