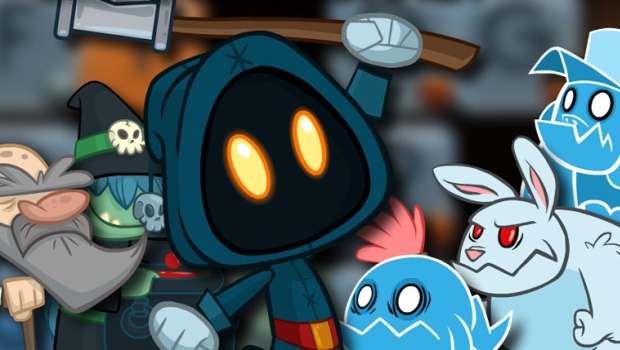 Death wants Pizza. For some reason, the denizens of the local cemetery, castles, and forests want to stop him from enjoying his favorite pie, and he and his female reaper sidekick, Rose, must use the power of progressively longer words to take them down.

If Letter Quest Remastered: Grimm’s Journey sounds a little familiar, it’s because the Xbox One is the third platform for the little reaper. I missed the game on mobile and Steam, but I’m glad I jumped on this puzzler this time around.

Simplicity rules the day in Letter Quest, and that’s a good thing. Grimm’s phone GPS says that the nearest pizza joint is kilometers away, so he sets out to get his favorite pepperoni and anchovy pizza (or whatever death incarnate eats), and that means battling the goofy ghouls, trucker-hat-wearing ghosts, and snaggle-toothed snakes. Grimm, naturally, wields the scythe of his office, but that’s not how he dispatches his pun-powered foes.

At its core, Letter Quest is a word-building RPG. Engaging enemies drops a grid of fifteen letters that Grimm must use to beat up the bad guys. With a nod to classics like Boggle and Scrabble, you’ll try to spell the longest word you can. Here, the words are designated with a one, two, or three bubble rarity, making words that use the letter Q do more damage than using more common letters like A. If Letter Quest stopped here, it’d be little better than the score of other letter-jumblers we’ve seen on the app stores.

Adding RPG-lite fun to the mix, when Grimm or Rose defeat a foe they drop gems that can be used in a variety of in-game stores. Weapon, armor, and health upgrades are standard fare, but both reapers can also equip books. The tomes grant additional powers such as doing more damage if a word contains double letters (e.g. battle, bubble), making monsters drop more loot, or granting health when you use a specific letter. You can only equip one book in the beginning, but later you’ll unlock two more slots for combined goodness. You won’t want to switch them constantly, though — your books earn experience the longer you use them, becoming more effective.

You can play as either Grimm or Rose.

You aren’t the only one with powers. As you fight tougher monsters, they’ll begin to use powers to mess with the tiles on the board. Plague tiles have a value of zero when used, just like cracked tiles, but the former will spread to adjacent tiles if you don’t use them immediately. Stone tiles, on the other hand, can’t be used at all for three rounds. Poisoned tiles can be used, but they hurt you as well. It adds variety and challenge where the game might otherwise get stale.

It isn’t always battling monsters with letters in Letter Quest — you’ll also get the chance to try your hand at a Wheel of Fortune-esque word guessing minigame. Given a limited number of guesses, you’ll pick out letters trying to guess words or phrases.

Punctuating the various areas in the game are mini-bosses and boss battles. These foes often have far more health, but they also usually have a gaping hole in their game. One foe had over five times my health, but succumbed almost instantly when I managed to build a word with double vowels in it. Finishing each area earns you a star, but these aren’t indicative of your prowess. Instead they represent other ways to tackle the same area. Your second star is timed, the third star may make your enemies tougher, expand the number of beasties, make them elite, or much more. Completing all three unlocks a final crystal star that is frequently far out of your reach until you level up a bit.

If you played the original, whether it be on mobile, or on Steam or Mac, there is a new way to play in this Remastered edition. Developer Bacon Bandit Games added an Endless mode that allows you to tinker with the background art, music, and letter properties to see how long you can survive.

What surprised me most about Letter Quest Remastered is the sheer amount of content here. Most games that could be considered ‘casual’ are light on content, but Letter Quest sports over 70 quests in all. You won’t be beating this in a weekend.

So many goodies you can purchase to help you get to your pizza pie prize.

My only complaint, and honestly it’s a very small one, is that the soundtrack for Letter Quest can get a little stale. I would have liked to hear some more variety in the audio, but there is so much that makes up that ground that it’s nearly a non-issue.

With oodles of charm, shockingly-addictive yet easily accessible gameplay, Letter Quest Remastered: Grimm’s Journey is one of the best family-friendly puzzlers on the Xbox One platform. It’s G-R-E-A-T.

Ron Burke is the Editor in Chief for Gaming Trend. Currently living in Fort Worth, Texas, Ron is an old-school gamer who enjoys CRPGs, action/adventure, platformers, music games, and has recently gotten into tabletop gaming. Ron is also a fourth degree black belt, with a Master's rank in Matsumura Seito Shōrin-ryū, Moo Duk Kwan Tang Soo Do, Universal Tang Soo Do Alliance, and International Tang Soo Do Federation. He also holds ranks in several other styles in his search to be a well-rounded fighter. Ron has been married to Gaming Trend Editor, Laura Burke, for 21 years. They have three dogs - Pazuzu (Irish Terrier), Atë, and Calliope (both Australian Kelpie/Pit Bull mixes).
Related Articles: Letter Quest Remastered: Grimm's Journey
Share
Tweet
Share
Submit