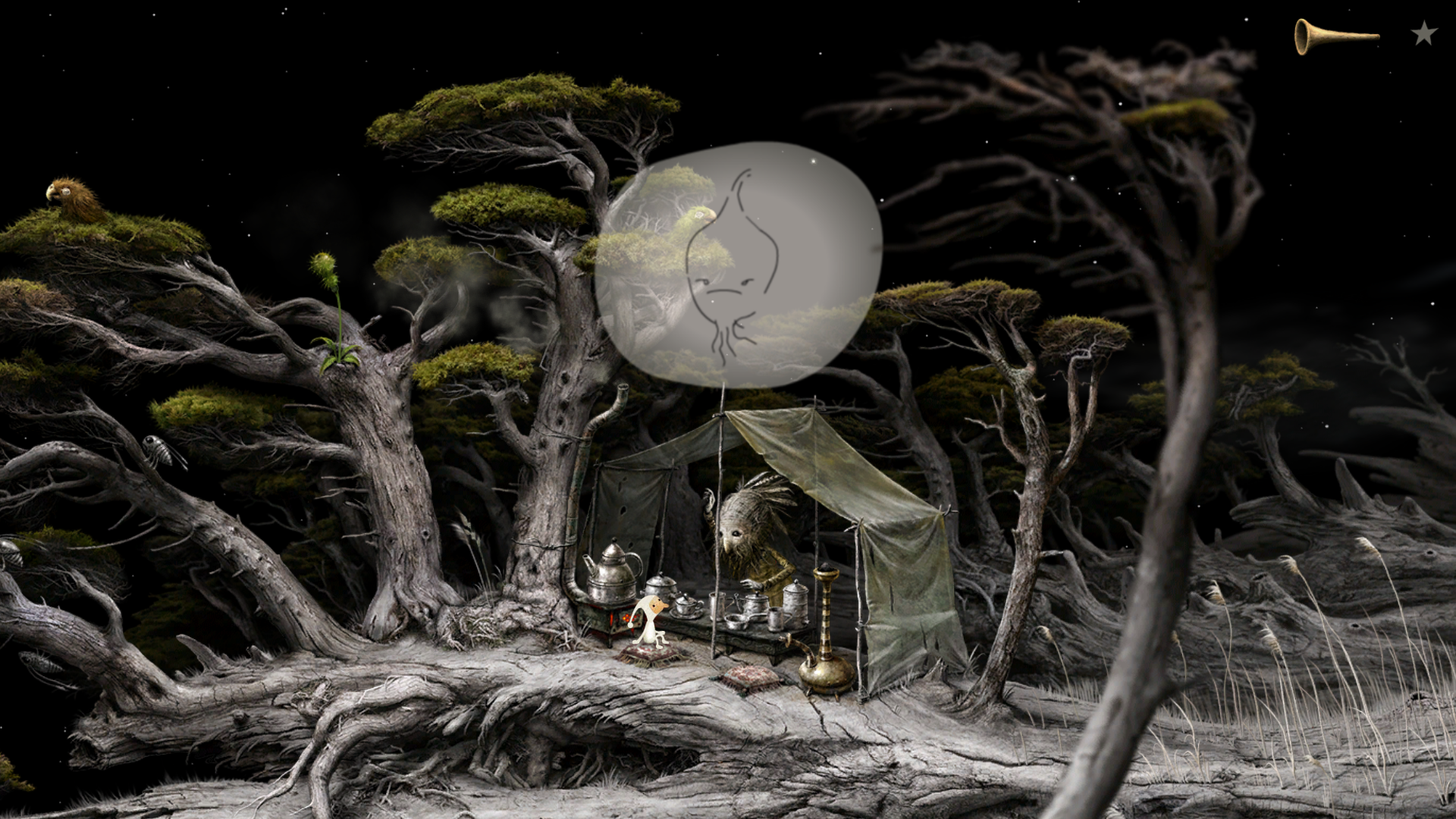 If you’re familiar with developer Amanita Design and its previous works like Machinarium and Botanicula, then you know what to expect from Samorost 3: a beautiful yet menacingly-abstract art style, seemingly simple puzzles that harbor a hidden degree of cleverness, quirky characters that grip your soul with whimsy and charm, and a world that crosses the playfulness of a children’s book with darker adult themes.

Samorost 3 has a palpably brilliant aesthetic. The chalk-dust craterous moons, lush Amazonian forests, and cool-tone bioluminescent caves pop with a variety of color and texture that envelops the player in a feeling of uneasy and desolate warmth. The isolation of our hero the gnome in the vast sabal of space beautifully juxtaposes the inviting and enrapturing nature of the art style. If Wilhelm and Jacob Grimm were alive today, they would most assuredly lend their stories to the artistic talents of Amanita. Every screen looks as if it was torn straight from the pages of a classic 19th-century fairy tale and reimagined for modern computer monitors.

Where Samorost 3 sets itself apart from other games of its ilk is in its sound design and musicality. Nearly every sound effect was done by voice; every pop, boom, crash, whoosh, huff, puff, click, and chirp comes from someone’s mouth. It adds such a unique flair to the overall presentation of the world. The first time you see the gnome take off in its spaceship and hear the launch accompanied by someone roaring through pursed lips to belt out the sound of rockets firing, you can’t help but laugh out loud. It works wonderfully, though, and is an extraordinary thread of the Samorost 3 cosmos.

The exquisite sound design extends to the musical score. Sweeping violins, resounding drums, and more eclectic instruments riddle the soundtrack with a complexity of beats and melodies. The sheer variety of symphonic tone sets Samorost 3 apart. In a matter of minutes, you will be taken from the grand halls of an orchestral performance to the jungles during a tribal celebration to the head-banging front row of a rock concert. Through my entire play time I constantly had my head bopping, hips moving, or foot tapping. Most scores take on the role of being the “icing on the cake,” but in Samorost 3 the score is baked right into every aspect of Samorost 3’s design and holds the game together.

In fact, how the gnome interacts with the world in many ways is through its horn. It carries around a golden horn that doubles as an ear trumpet. Certain objects in the world will emit a pulsing circle of sound waves, to which the gnome will listen to through the horn and then play back the melody to activate the object. This will most often end up withdrawing the spirit of the object, in which a crudely-drawn (but fitting the art style) outline of a character or characters will tell the story of the object that just listened to. Again, these little scenes are combined with human sound effects, so it gives off the fantastic impression of a child playing and acting out one of their own drawings. Sometimes these spirits will give the gnome clues as to how to solve a puzzle or navigate the screen.

With your help, the gnome proves pretty adept at solving puzzles. Most begin with having to interact with a character that needs something, or needs you to do something for them. Traversing back and forth between multiple screens to pull levers and push buttons that change and move objects elsewhere is part and parcel to the Samorost 3 puzzle experience. Many of the aforementioned spirits will become puzzles as well; some might require you to combine a mixture of different colored circles until there are no circles left (like colors combine, while dissimilar colors reflect each other). The best part about the puzzle design was how often I turned to the pen and paper. A great metric for measuring the quality of a puzzle is how often you have to take notes, and Samorost 3 had me frantically scribbling on a notepad.

The true icing on the cake of Samorost 3 is the odds and ends throughout the world to be discovered. As you fly your spaceship from planet to moon to asteroid to other planet you’ll find tons of creatures and objects that can be played with. A glowing antelope leaps in the background across each screen of one planet…how do you catch it? A mimicking parrot copies several other critters on another planet…what happens if you copy each critter in a specific sequence? These awesome side puzzles are scattered throughout the galaxy and really help to flesh out the world. Many will even reward you with spirit icons that can be collected. Each has a beat or melody attached to it and can be played in the inventory screen. When multiple icons are played simultaneously, the parts converge to create a larger whole. I’ve yet to complete the song and see what comes of it, but I’m more than happy to continue exploring Samorost 3 to find out.

Samorost 3 is a sensational journey through a delightful yet deceptively twisted world where fairytale collides with science fiction, themes of addiction and power mix with lighthearted play, and the adventures of a little the gnome always kept a smile on my face.

On December 5, 1986, Josh was born into this world pink-faced and squalling. His only thoughts were, "WHAT IS GOING ON? WHO ARE ALL OF THESE PEOPLE? AND WHY THE HELL AM I NAKED?" 19 years later he bought an Xbox 360 and now plays and writes about video games. Life is funny that way.
Related Articles: Samorost 3
Share
Tweet
Share
Submit