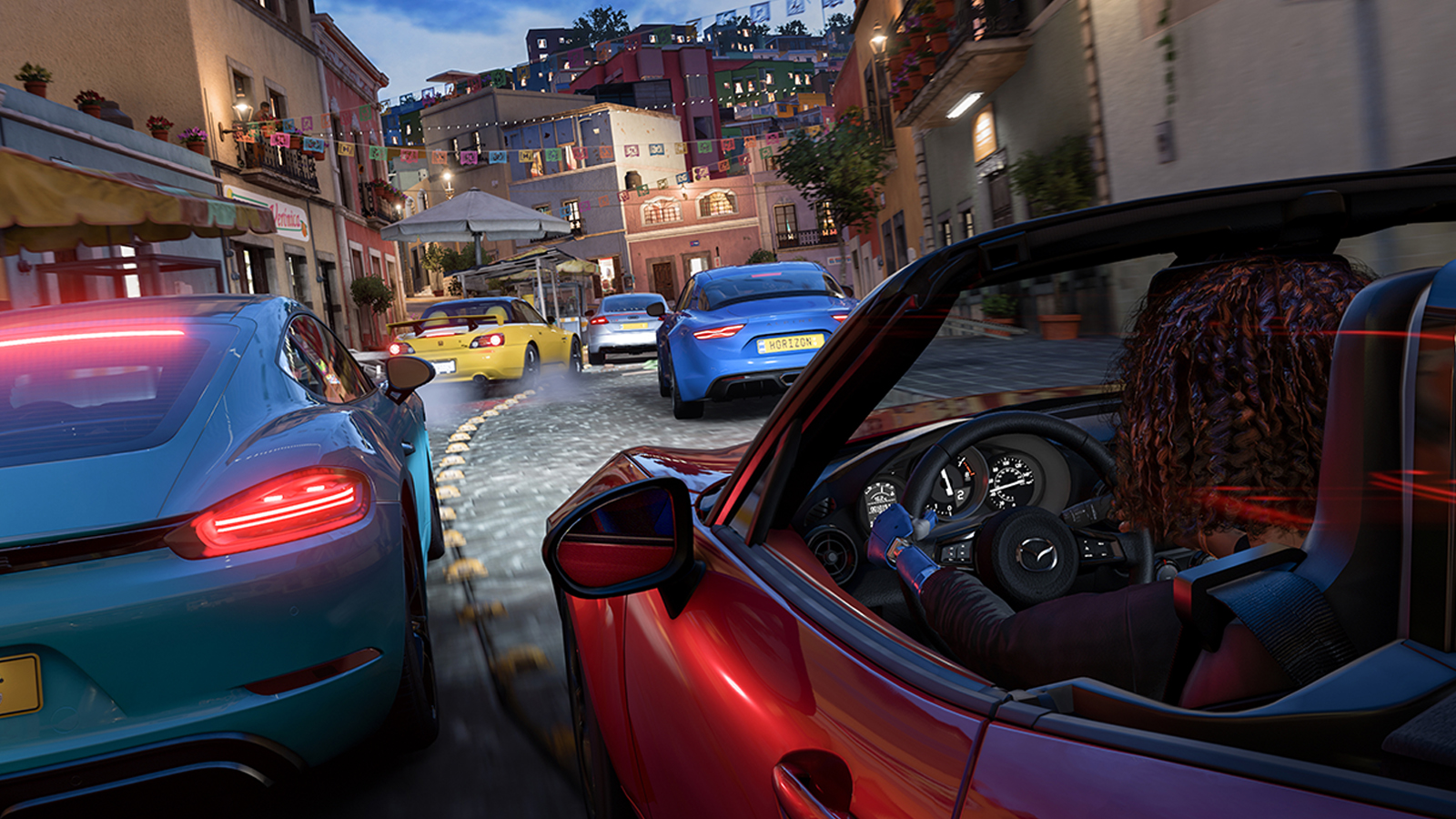 Imagine driving your favorite vehicle but you’re racing someone in a giant monster truck. Two more trucks show up and they’re not just racing you, they’re doing flips and entertaining you while you race them to the finish line. Then once the race is over, you’re awarded the pleasure to drive the monster truck in a stunt stadium full of bowling pins to knock over. Welcome back to Forza Horizon! In this modern era, no other driving franchise delivers something so wacky and still threads an unmistakable sense of realism into its racing. Forza Horizon 5 undoubtedly pulls off this stunt again even though it feels a little too familiar. Mexico is a gorgeous landscape to race in, the cars feel fantastic, and while it can feel too much like Forza Horizon 4, there are new additions that work well in giving Forza Horizon 5 a few tricks of its own, even though they’re a little clunky.

Forget beating around the bush, let’s just roll over it. Forza Horizon 5 is the most iterative Horizon sequel. From Horizon 3 to Horizon 4, it felt familiar but fresh since there were quite a few changes. Horizon 5 brings back a lot of elements from Horizon 4. Rivals, blueprint creations, seasons, a race against a train (they acknowledge this one in dialogue), the way the map is structured with mountains at the top, the coast on the right side, and the desert in the middle all make this feel not just familiar, but like we’ve done this before the exact same way. Playground Games even leans into this iterative design and tries masking it by making Horizon 5 kind of a direct sequel to the events of Horizon 4. There are quite a few references to the UK’s Horizon Festival and many of the same event organizers and voices from Horizon 4 return. Heck, even my own character virtually looks the same from Horizon 4.

But it doesn’t take long to find out this isn’t a copy and paste job. Since we’re in Mexico and not the UK or some other anglo territory, Playground Games decided to include tiny bits of cultural education in the form of Adventures. These are activities that include full throttle and exciting races as well as expeditions. One mission takes you to an ancient Mexican landmark where you’re able to view and explore the area and take pictures of the local statues. I couldn’t tell if it was a real landmark or inspired by on one, but I was still awestruck by the structures. Another mission teaches fundamentals about Luchadores by walking you through the “steps” to become a wrestler by winning races. Another actually has nothing to do with Mexico but ties directly back to Horizon UK. It’s predictable and a little annoying that Mexico becomes the museum out of all the Horizon’s, but the activities are entertaining and not disrespectful, despite being a little superficial. 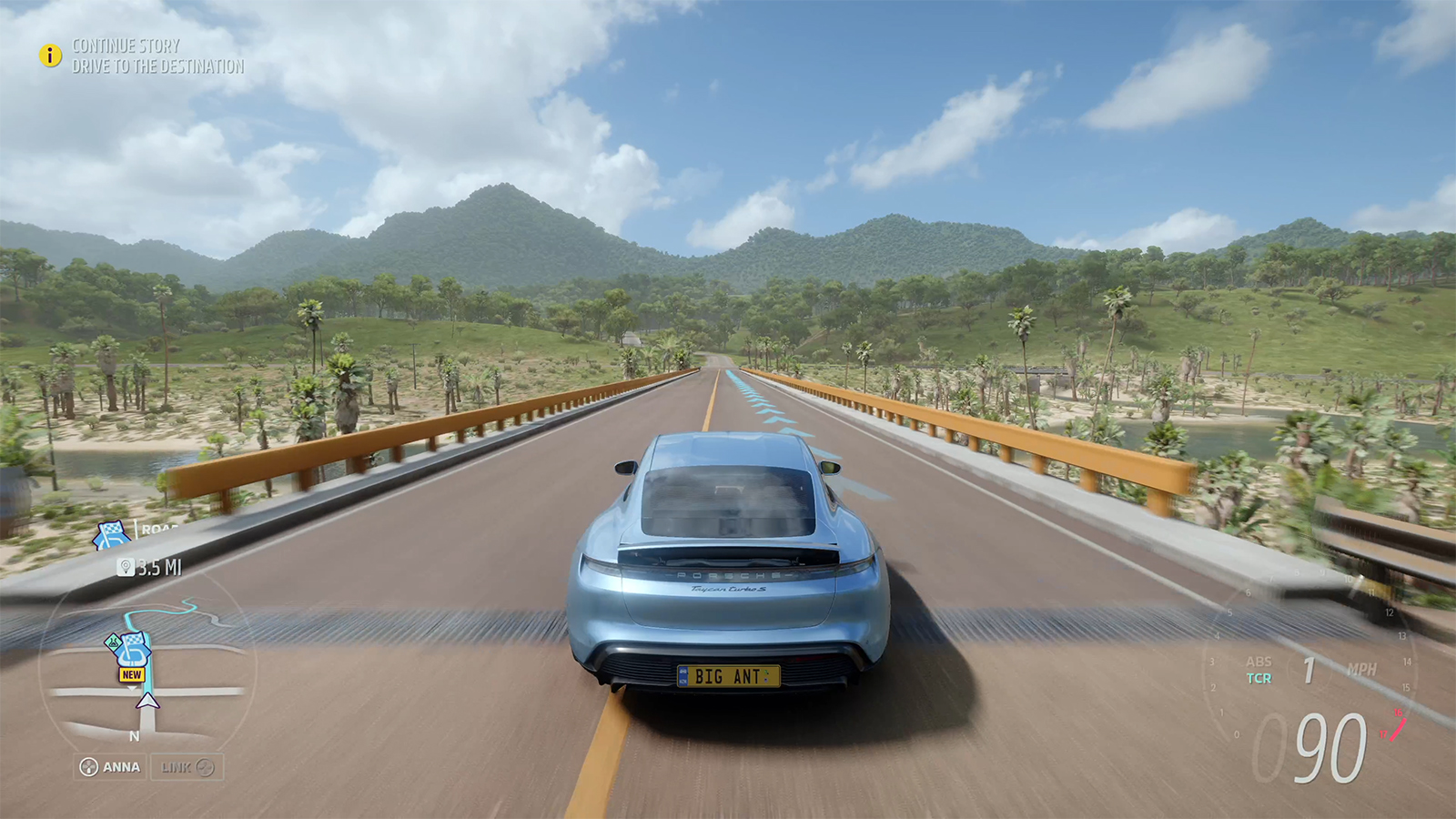 Adventures are unexpectedly fully voiced but they made me cringe at times, and there is a lot more of it, unfortunately. Even your character talks now. It’s nice they hired Spanish-speaking voice actors as you can tell they rattle off words not caring if you understand it or not unlike Far Cry 6, but the constant need for enthusiastic speech makes many of the deliveries feel forced and unnatural. On the flip side, without your character’s responses, I don’t think the stories could be told as well, not that they’re particularly gripping.

All of this is meant to push towards increasing your accolades, which is Horizon 5’s experience system. There are a lot of ways to earn accolades from completing drift challenges to wrecking cacti. Almost anything you do has a challenge associated with it. That feels less tiresome compared to previous entries since it’s not just about hopping from one race to the next and, instead, rewards the randomness you’ll do.

None of this matters if the driving doesn’t feel good, though. But it’s Forza Horizon. Of course it feels good. Drifting feels amazing, in particular. I’ve always hated drifting in Horizon games. Whatever Playground Games did to improve drifting, it worked. It’s easier to initiate a drift, a little easier to keep one, but it’s still a challenge to maintain a drift and wrack up a huge skill score. Otherwise, cars still feel weighty and still have some of that Forza Motorsport realism to them. Speeding down a straight and one side of your tires plow through a deep puddle of water will certainly make you spin out, but the physics feel arcadey enough so you’re not bogged down too much by unavoidable elements like soaking wet roads. That said, there are still plenty of options you can use to make Horizon 5 more real and more difficult. As usual, you will be deservedly rewarded with extra credits for increasing the difficulty. 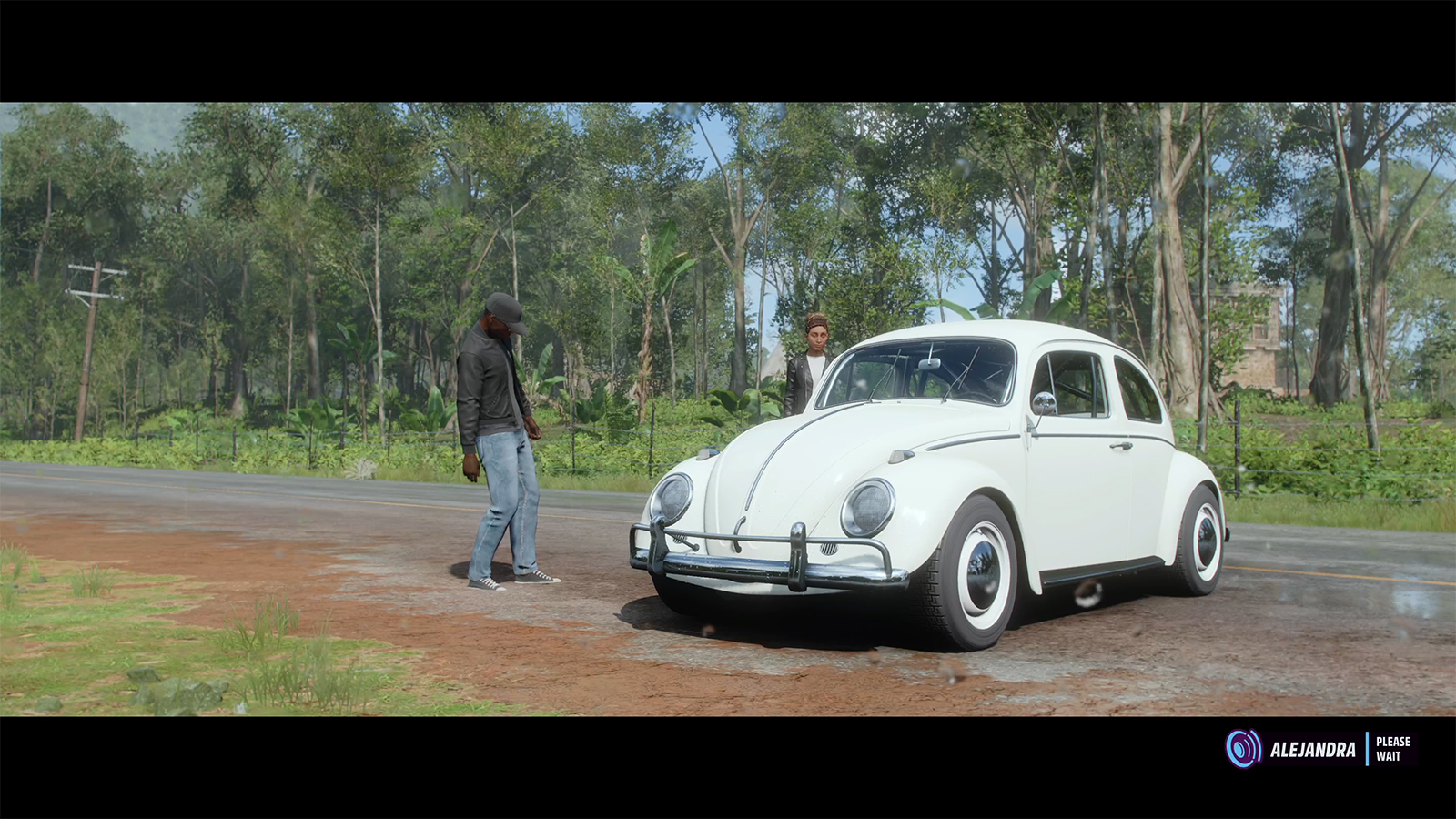 Normally when I play Horizon, I’m typically using C-A class cars since that’s what you start with, and you’re rarely forced into choosing something else. Horizon 5 delivers a healthy few A to S1 class cars at you early on, and I haven’t used too many lower classes unless I’m participating in player-made courses from blueprints. It’s made racing way more exciting for a longer time and though it’s harder to control higher speed cars, the quicker you can get used to it, the easier it is later. I found myself buying more cars too, but I never went broke as credits aren’t hard to earn, even at lower earning percentages. There are so many enticing cars, too. The Corvette Stingray, the Ford GT, Lambo Centenario, the Mercedes-AMG One, the Nissan Skyline, and the Porsche Taycan Turbo S. That’s not to say the lower class cars aren’t fun. Sure they’re slower, but Horizon’s never been about high speed at all times. You have the Camaro Z28, Corvette Stingray, the 1969 Dodge Charger, and even the 1975 Ford Bronco is fun to joyride in. Mexico provides plenty of routes to enjoy the sights at a slower speed and it’s nice not having to feel like I have to feather the brakes or beware of oncoming traffic all the time. You’ll discover classics through Barn Finds and some goofy ones like the Isetta 200 Export or the 1965 Ford Transit. Obscure cars and old classics have always been a part of the Horizon franchise but Horizon 5 seems to lean more into the hottest and wackier picks. Trust me, it’s a lot of fun to hop into a convoy where everyone is rocking some sort of giant truck.

No matter what you’re driving, though, Playground Games’ version of Mexico is exhilarating. Like all the other maps from Horizon, there are desert areas, coastal areas, jungles, and mountainous regions. But Mexico has a volcano (though I’m not sure if it erupts), it has beautiful white sandy beaches (one even has a couple of beach balls you can bop around), and when you look out with the improved draw distances, the immense amount of foliage covering the land looks absolutely gorgeous. It’s so much fun to drive through and is especially gorgeous in Quality mode, which is 4K30 on Series X, but it still looks great in Performance – 4K60 – despite the noticeable color desaturation and pixel degradation. Horizon Mexico’s radio stations add to the exhilaration and for the first time, Block Party is not my favorite. I don’t know if this was a bad year for hip-hop and rap or a good year for Electronica but Bass Arena’s got some bangers. Easily the best station this year.

Online returns in the same form as it did in Forza Horizon 4 but has a few differences – mainly Forza Arcade. Think of these as public events that occur in real time without needing to start an event to load it in. A giant blimp hovers over an area of the map and creates a zone. Anyone who enters that zone can participate and contribute to a larger score. I was only able to participate in a couple and I completed one phase by myself. Each phase lasts a fairly long time and when people do participate, it’s fun seeing the numbers rolling up, knowing that people are helping out. Seasonal challenges seem to be the primary reason to join Arcade activities and if that’s the case, that’s sadly not enough to continually do them, especially if you’ve already completed your challenge. There is little incentive to participate outside of the challenges. They’re fun, but even after driving through a few, they all were drift activities. It needs more variety. 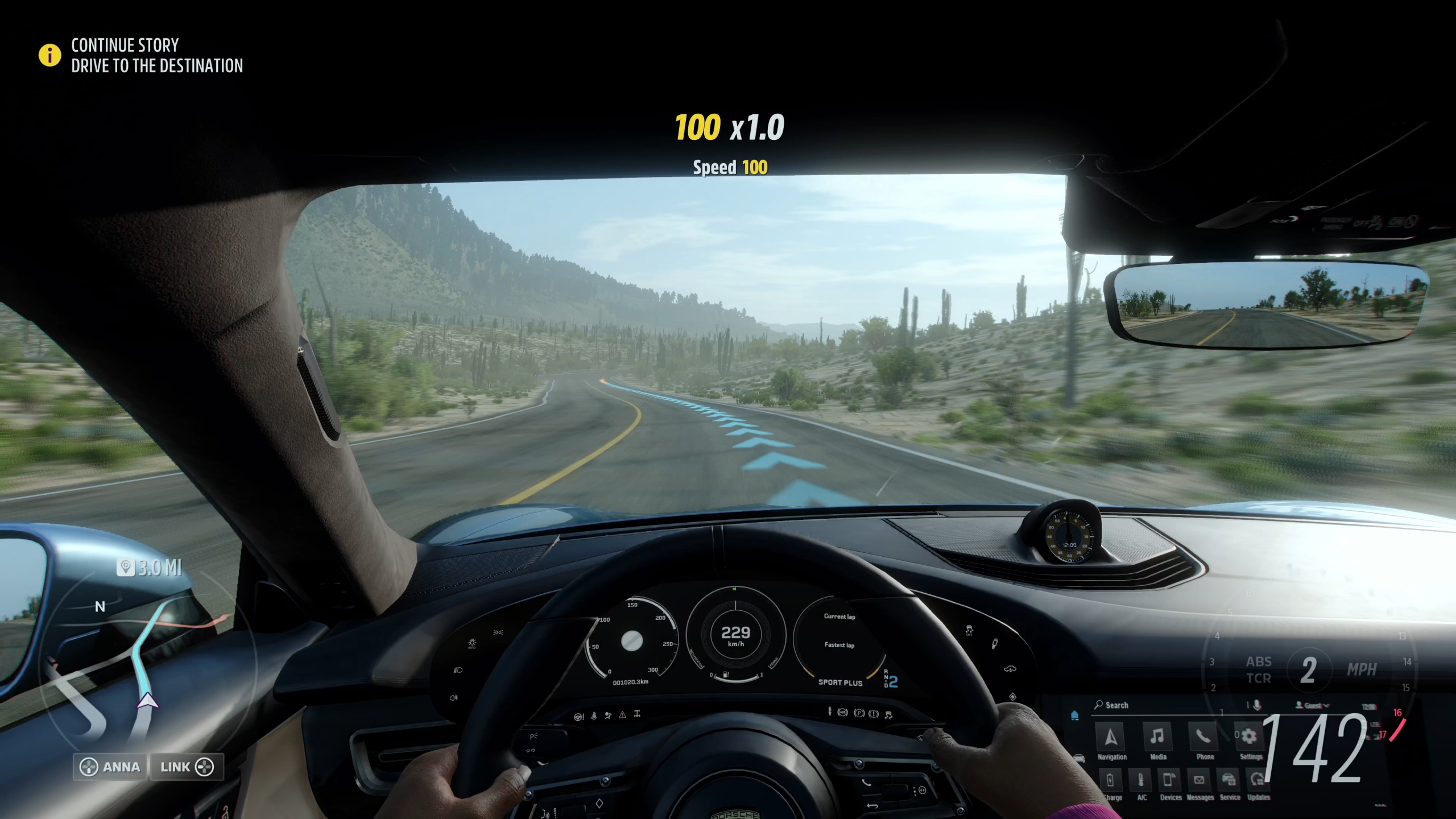 If you can’t find people to join you in an Arcade activity, or any other one, you can use Forza Link. It pings the players in your world for the activity you’re doing and people can join you by responding. It works very well when joining a group. I used it to join someone’s convoy and after two taps, I was in the group. Forza Link also doubles as the only communication tool. It’s horrible. You’re limited to two default messages, like “GG” or “Hi,” in freeroam and you only have two options based on other activities. I found myself wanting to message my convoy that I needed to leave and wanted to say thanks, so I was forced to dig through all the potential messages to override what was already there so I could put it in chat.

I couldn’t take part in many of the other online features since there weren’t enough people in the servers, but there are a few more group activities that are meant to bring people together. There are seasonal challenges that reward you for participating in these groups, as well as other online activities like rival challenges, and thankfully they’re not all competitive. The hope is that it provides more incentive for people to group up and finish activities together without having to find a Discord to join.

A lot of Forza Horizon 5 feels similar to Forza Horizon 4 in a way previous Horizon games haven’t felt with their prequels, but Adventures bring unique storytelling and slight edutainment to the Horizon formula and if more Horizon’s are in the future, particularly ones not in Europe and America, it’s not a bad foundation to build on. Driving feels as good as it ever has and Playground Games absolutely succeeded in interpreting the beauty of Mexico. The seasonal model returns and it does a better job of incentivizing people to group up, but it’s still not quite enough to entice people to do activities like Forza Arcade.