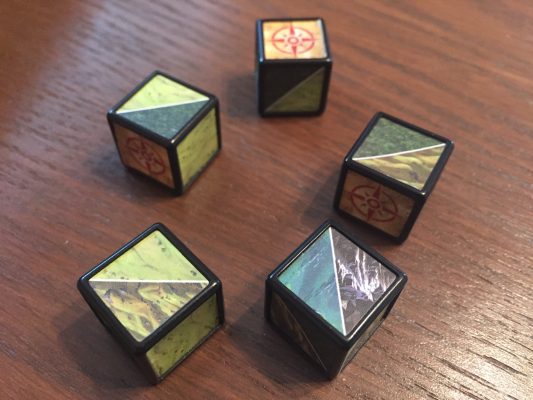 Creating a new edition of a classic game can be a tricky proposition. If the designer sticks too close to the formula, then reviews might say that nothing new came and the game lacks creativity. If the designer changes too much, purists will scream to the highest hill of board game internet trolls (BGG) about how the designer is ruining their childhood like the Star Wars prequels. With Runebound being so iconic, creating a new edition could backfire with fans.. However, Runebound Third Edition was still released, but will it cause gnashing of teeth or bring something new to the table that spiritually feels like the much loved Second Edition?

Runebound is a game of exploration, adventure, and combat. Two different objectives are included within the base set, giving you more options. The first adventure, The Ascendance of Margath, has you trying to kill a dragon that appears towards the end of the game. The other adventure, The Corpse King, follows the necromancer Vorakesh. During both of these adventures Margath and Vorakesh are represented on the board instead of appearing out of nowhere like the elder god in Arkham Horror. This makes the objectives of the adventure more tangible with a more visible objective.

These dice direct your path.

Six different heroes are available to play in Runebound. Each character reference shows the background, starting gold, maximum hand size, starting location, combat tokens, and any setup bonuses on one side. The other side shows the hand size, health, speed, special abilities, and attributes of the character. Skill checks and skill cards are checked against your character’s attributes.

The board consists of the ground you cover over a hex map marked with different types of terrain. Cities throughout the map represent areas to rest and trade, while adventure markers placed all over the board can give you great rewards through combat or exploration. One side of the board consists of areas representing the shops within the cities, while another side has slots for story cards. A twelve-step timeline on the board indicates how much time you have to complete your adventure. Starting the game you get a certain number of gold and starting equipment. The combat tokens you receive for your character represents your equipment. As you complete quests you’ll work to improve your equipment and gain skills.

During your turn you get three actions. Moving takes a single action and is performed by rolling the number of dice equal to your movement. The dice show different types of terrain that your character can move over. You may also move a single hex in lieu of rolling the dice. Unfortunately, these plastic dice require you to place stickers on the sides. Placing these straight requires surgeon’s hands. It may be all for naught though, because during my first play some of the stickers started to come off.

When you find yourself in a city, you can shop for new equipment. Equipment cards placed along the side of the board represent the equipment available in each city. When you shop you take a card from the top of the equipment deck, leaving you four options to pick from. If you want to purchase an asset, you pay the gold on the card. If you don’t want to purchase something you discard one of the cards, leaving three cards to the shop. Resting is another action you may want to do while in a city as well. Resting inside of a town, shrine, or stronghold heals all damage you currently have. If you rest elsewhere you roll the dice and heal one damage for each symbol showing the terrain you are on.

Training lets you fill your hand with skill cards. Some special abilities require you to exert a skill card by discarding it. You can also exert a card to reroll a single terrain die. For this reason you want to have a hand full of skill cards. Skill cards can be difficult to obtain due to the number of trophies required to purchase them, but they are worth it if you can get them.

The heart of Runebound Third Edition lies in the adventuring. Certain hexes scattered over the map have adventure gems placed on them. When you land on a space with an active gem you flip the gem token over and take a card from the adventure deck matching the gem color. The adventure decks have cards used for every game and cards specific for the scenario you are playing. This makes the decks unique for each adventure but still have enough side quests to play. During certain points in the game you refresh inactive adventure games that don’t have a hero at their space.

The adventure gems come in three colors. Orange focuses on combat where you’ll often find enemy cards. Green uses exploration and often you’ll find quest cards which require you to travel to a specific space. Purple gives you social events with event cards which give you two options to choose from. That’s not to say you’ll always find those kinds of cards. Chances are good it will be, but sometimes you’ll be surprised by the draw.

The combat system makes the Third Edition of Runebound completely unique. When your encounter shows an enemy you enter combat. You throw down or flip combat tokens, while the previous player does the same with the enemy’s tokens. These have symbols for attacks, defense, and other abilities. The player with the most gold symbols on their tokens gains initiative and goes first. You then alternate using the tokens for attacking, defending, and making strategic moves. A surge lets you use the special ability of your character, while the agility symbol lets you turn over one of your tokens or force your opponent to recast a token. A double symbol lets you perform a specific action twice. You continue using combat tokens back and forth until both players run out of tokens or an opponent is defeated. The only exception to this are shields, which can be used to deflect one point of damage per symbol and don’t require a combat action to use.

The board is ready for adventure.

The enemies in the game use the same tokens for the combat step, so you might wonder how the opponents get tougher or differentiate themselves. One way is how much damage each opponent inflicts for a successful hit. The special abilities each one has differs as well. Villains have a symbol in the lower left of their card giving them a unique token for combat. Finally, half way through your playthrough the enemy gains a powerful new combat token that gives a two damage attack or a new surge.

When you successfully complete an adventure you gain the card as a trophy. Skills show orbs on them that correspond to the color of the adventure card, or grey orbs that represent any color, as well as an icon that represents its attribute. To learn a skill you spend trophies that correspond to the orbs on the skill card. You also can’t have more skills than the number attribute of your character, so there may be times when you are required to discard a skill you have. Skills are difficult to get though, so you really don’t want to discard a learned skill unless you are trading it for something much better.

Fantasy Flight has made a habit of tightening the game mechanics when creating new editions. Runebound Third Edition is no exception. While Runebound still has a healthy playing time, you’ll never feel like you are slogging through the map. Even through combat takes a longer time than rolling a few dice, turns progress quickly.

While a large uproar came about when Runebound Third Edition was announced, those interested in the game shouldn’t worry. While you aren’t going to be constantly getting upgraded stats, gaining new battle tokens throughout the game upgrades your character. You’ll also have a good idea what kind of encounter you’ll face going to the adventure points. I also really appreciate the fact that the objective of the mission actually show up on the board. The combat has more depth, and the adventure cards change depending on the mission. There’s no doubt that expansions will become available, as the game is setup for more adventures, characters, and missions. If you like the world of Terrinoth and haven’t gotten a chance to play Runebound before, the Third Edition is a great introduction.

While not working as a Database Administrator, Keith Schleicher has been associated with Gaming Trend since 2003. While his love of video games started with the Telestar Alpha (a pong console with four different games), he trule started playing video games when he received the ill-fated TI-99/4A. While the Speech Synthesizer seemed to be the height of gaming, eventually a 286 AT computer running at 8/12 Hz and a CGA monitor would be his outlet for a while. Eventually he’d graduate to 386, 486, Pentium, and Athlon systems, building some of those systems while doing some hardware reviews and attending Comdex. With the release of the Dreamcast that started his conversion to the console world. Since then he has acquired an NES, SNES, PS2, PS3, PSP, GBA-SP, DS, Xbox, Xbox 360, Xbox One S, Gamecube, Wii, Switch, and Oculus Quest 2. While not playing video games he enjoys bowling, reading, playing board games, listening to music, and watching movies and TV. He originally hails from Wisconsin but is now living in Michigan with his wife and sons.
Related Articles: Runebound Third Edition, Tabletop
Share
Tweet
Share
Submit