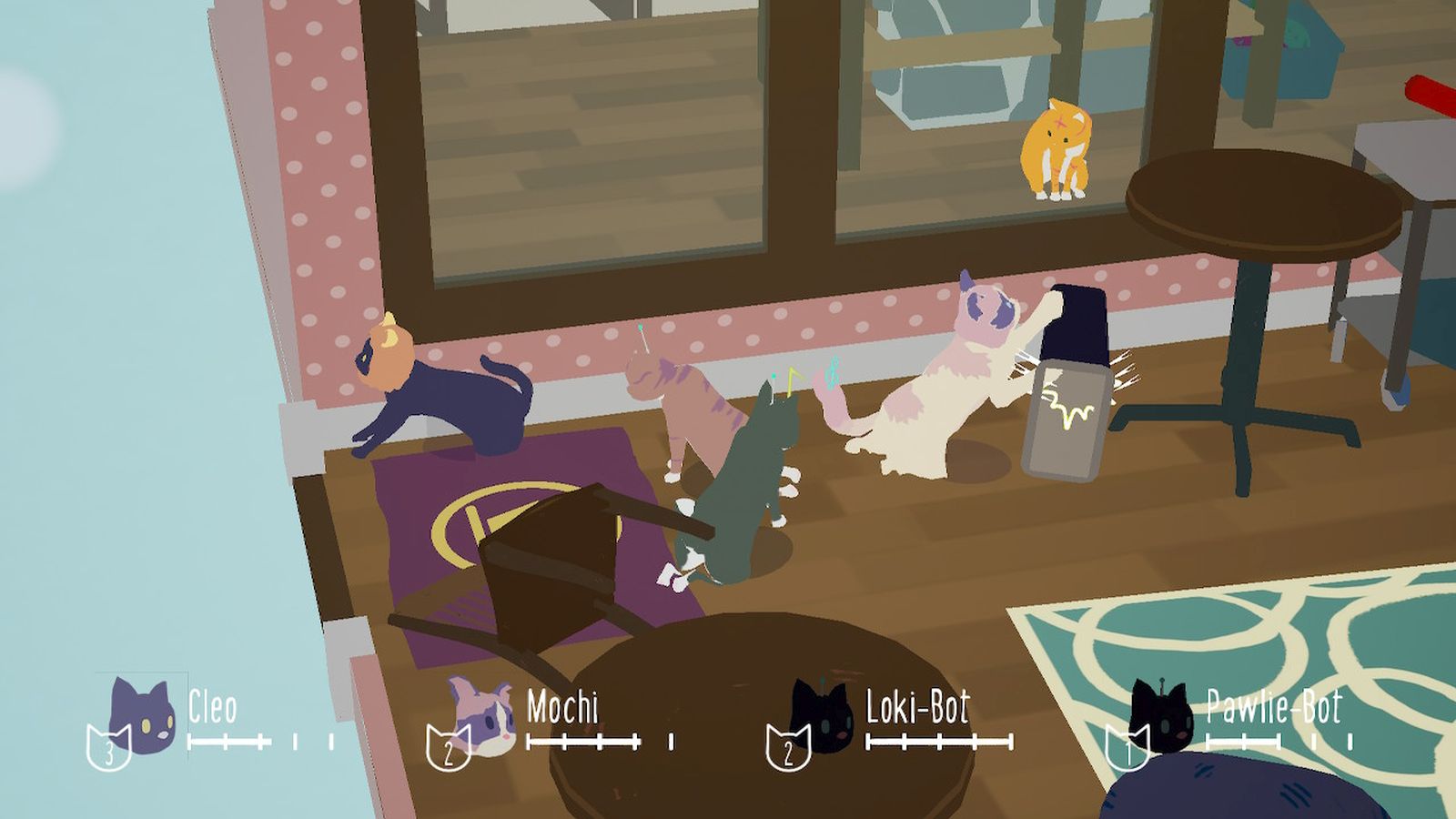 Imagine a room full of cats. Now imagine that room full of cats brawling to the death and destroying the furniture at the same time. Now add metal music. You got that? Well, that’s Fisti-Fluffs in a nutshell. It is loud, ridiculous, hilarious, and quite fun to play co-op – although it is plagued by a few unfortunate issues.

The concept is simple, you and up to three friends or bots can compete in various matches to determine who is the ultimate cat. You can customize your cat by changing their fur color and adding ridiculous hats and glasses. It may not be on par with RPG customization, but it works enough to differentiate players from each other – and how can you not laugh when being beat down by a cat wearing a piece of bread around its face? 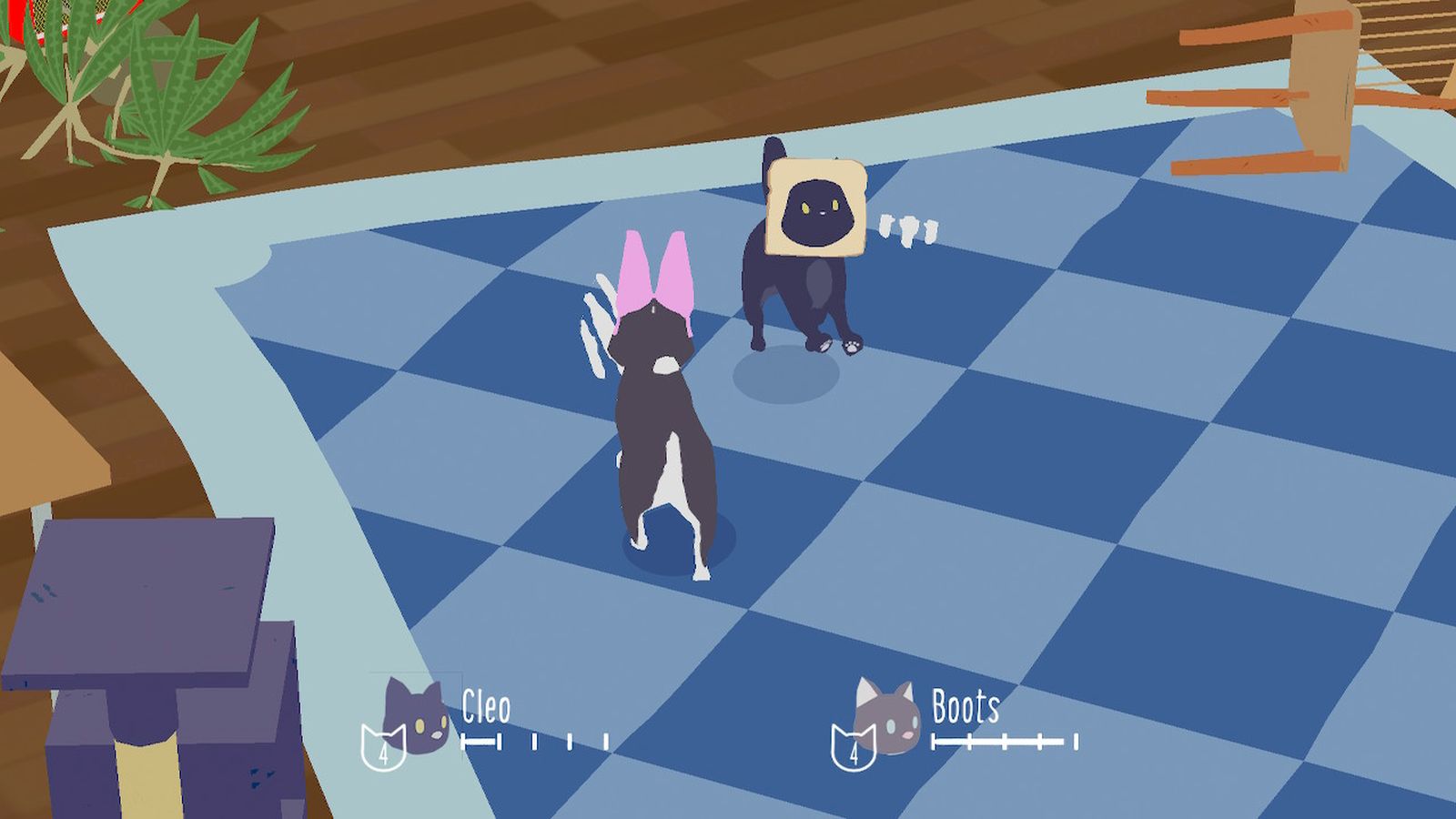 Before jumping into the action, you can choose between “cute” music or “metal” music. I highly recommend only playing with the metal music option on. Not only does it change the aesthetic of the game, but it is also just a lot more fun to watch cats destroy houses and beat each other up to a metal soundtrack. Plus, when you knock out an opponent, fire shoots from the sides of the screen. It is at once ludicrous and amazing.

After making your music choice – I mean, after you choose the metal soundtrack – you can then choose from among the five available modes: Kibble Defense, Tussle, Crown Control, Destruction, and Party Mode.

Kibble Defense involves players teaming up to stop sneaky rats from stealing kibble in an endless co-op mode. Waves of rats and racoons, slowly progressing in difficulty, will bombard the house to steal your food. This mode features a two-floor house with four main areas to protect. There is no split screen during these matches, but thankfully the camera does a great job at zooming in or out as needed to help keep track of all players at once. 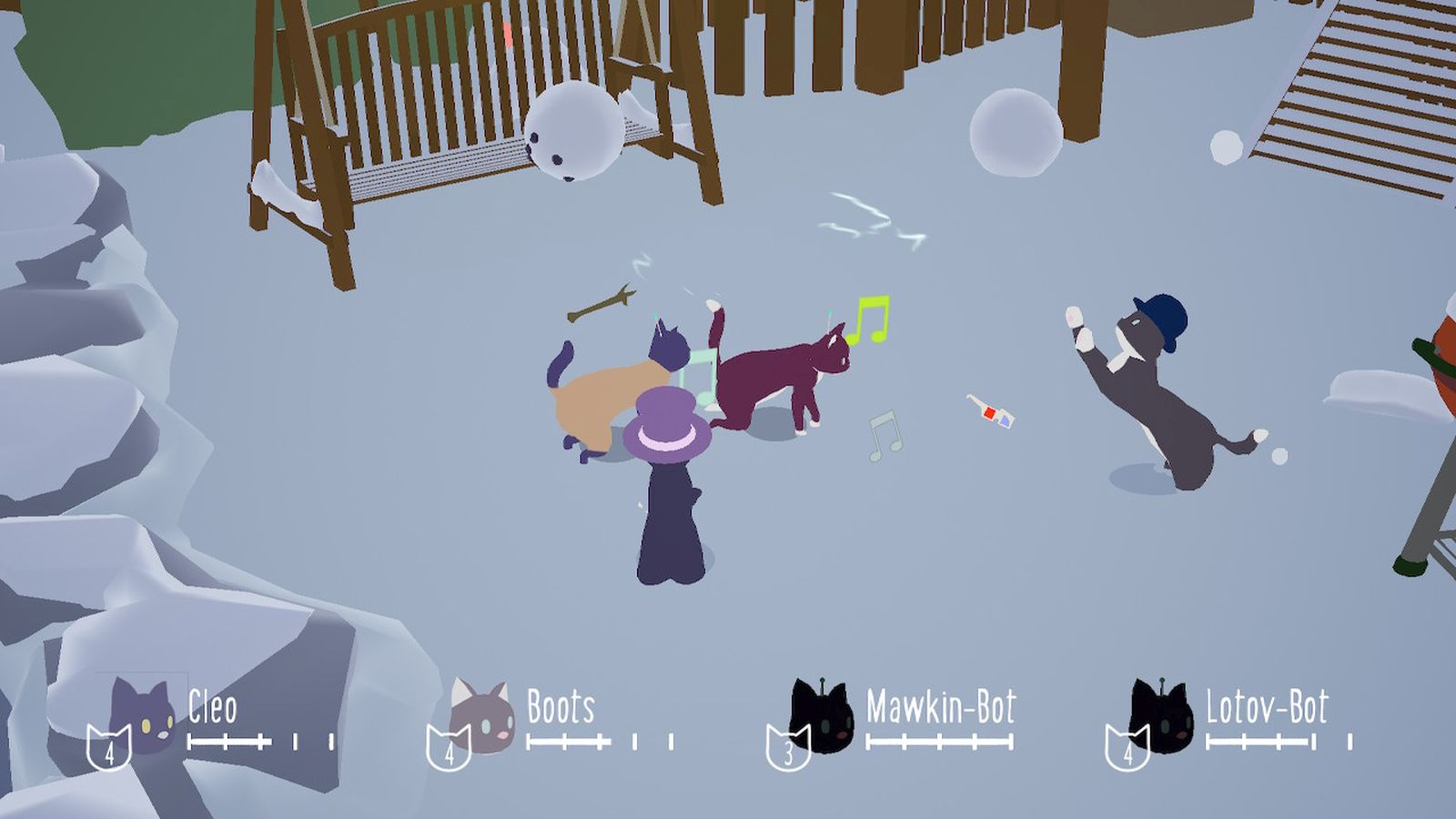 Tussle is essentially a last cat standing battle royale, and in my opinion, the best mode available. Up to four cats can battle at once, and you can choose to fill in any empty spots with bots if you’d like. The goal is simple: Attack, meow, jump, and pounce wildly until yourself – or your opponents – are defeated. You can create a bubble to shield yourself, but there is little else to stop the onslaught of attacks. This mode is sheer chaos, with cats meowing at each other, furniture being destroyed, fire blazing from the sides of the screen when opponents go down, and up to four player pile ups. There are a few customization options available, including six levels to choose from and the ability to set the number of available lives per cat. The match ends when only one cat is left standing. 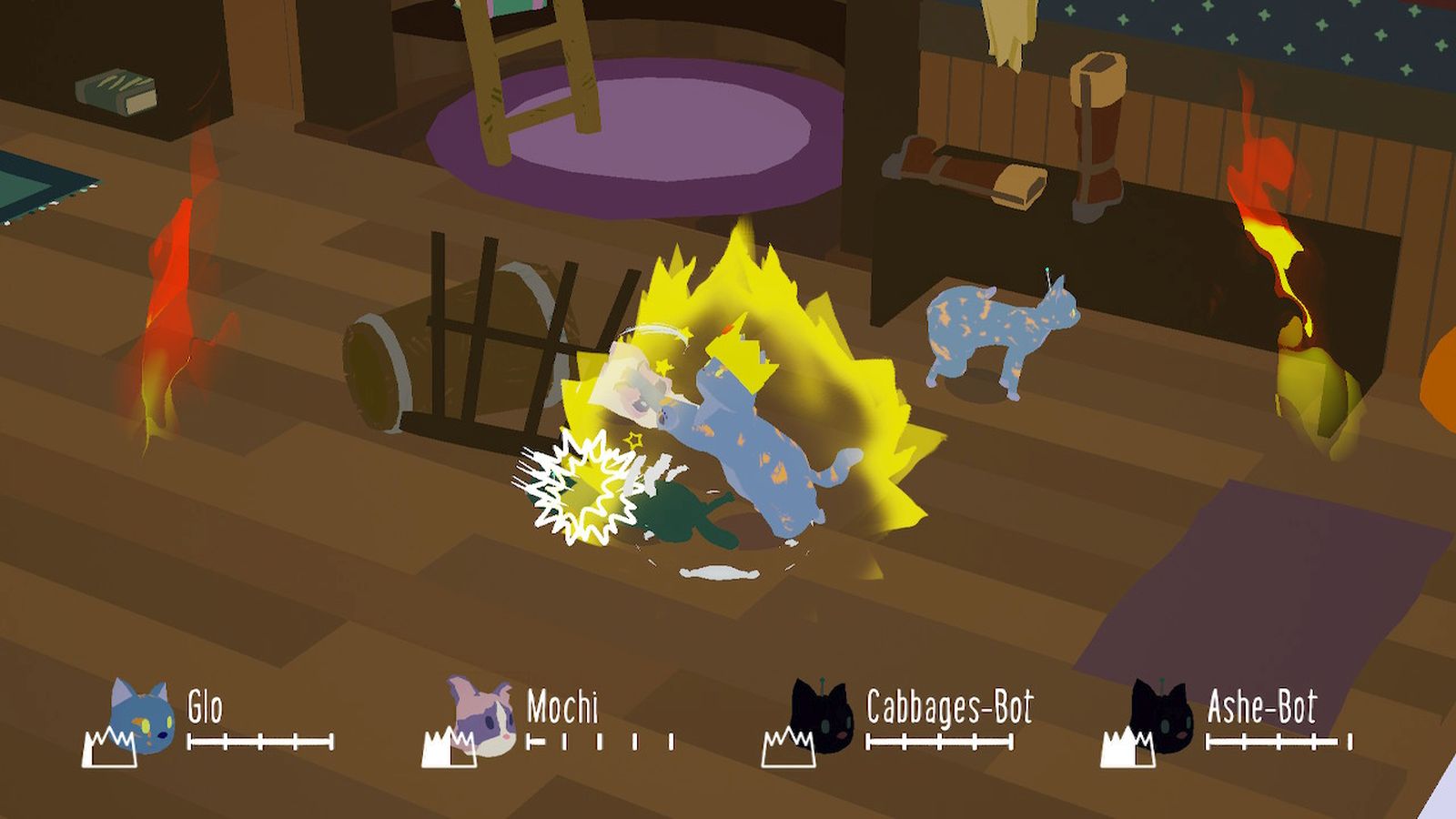 Crown Control is essentially cats playing keep away from each other. To win, you must don a magnificent cat crown and be the first to charge its power by keeping a hold of it for a set amount of time. Of course, the whole time you’re wearing the crown you’ll be fending off attacks from the other cats. Wearing the crown makes you move slowly, but you become much more powerful to offset this disadvantage. Crown wearers can knock opponents out with one swipe, but don’t think that will save you – when attacked from all sides you’ll still have a rough time keeping a hold of the crown long enough. If you lose your crown another cat can steal it and gain its powers. Up to four cats can compete for the crown with bots filling up open positions if a player chooses to add them. 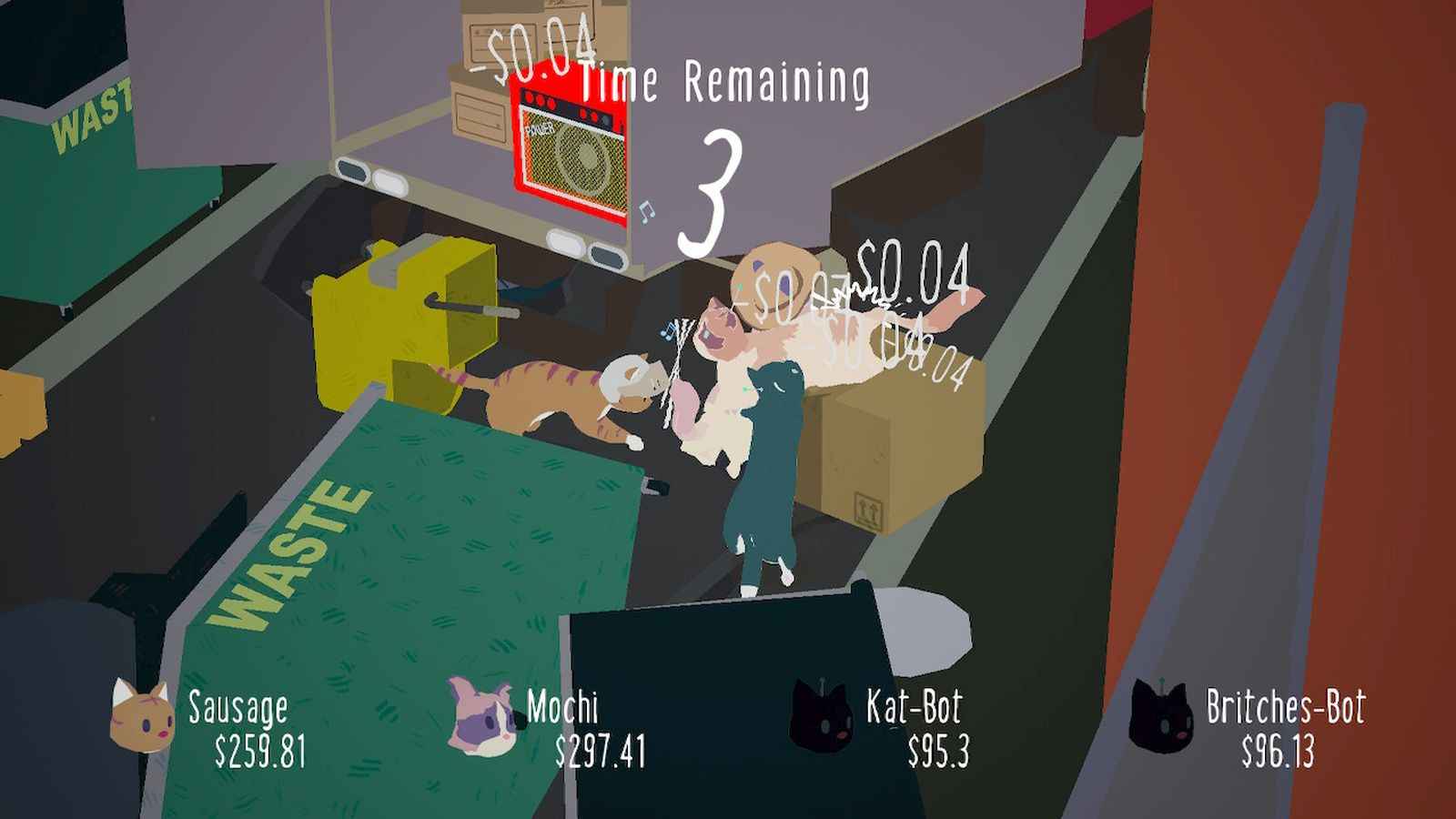 Destruction lets cats do what they do best – scratch up furniture. In this mode up to four cats compete to cause the most property damage to a room. Attacks on furniture and objects earn you cat points based on the object’s value, with each swipe showing a price tag appear overhead with the amount of damage you’ve caused. Completely destroying an object instantly earns you the full number of points available for that object. The cat who racks up the most damage within the set time limit wins. You can adjust the time limits for these matches. 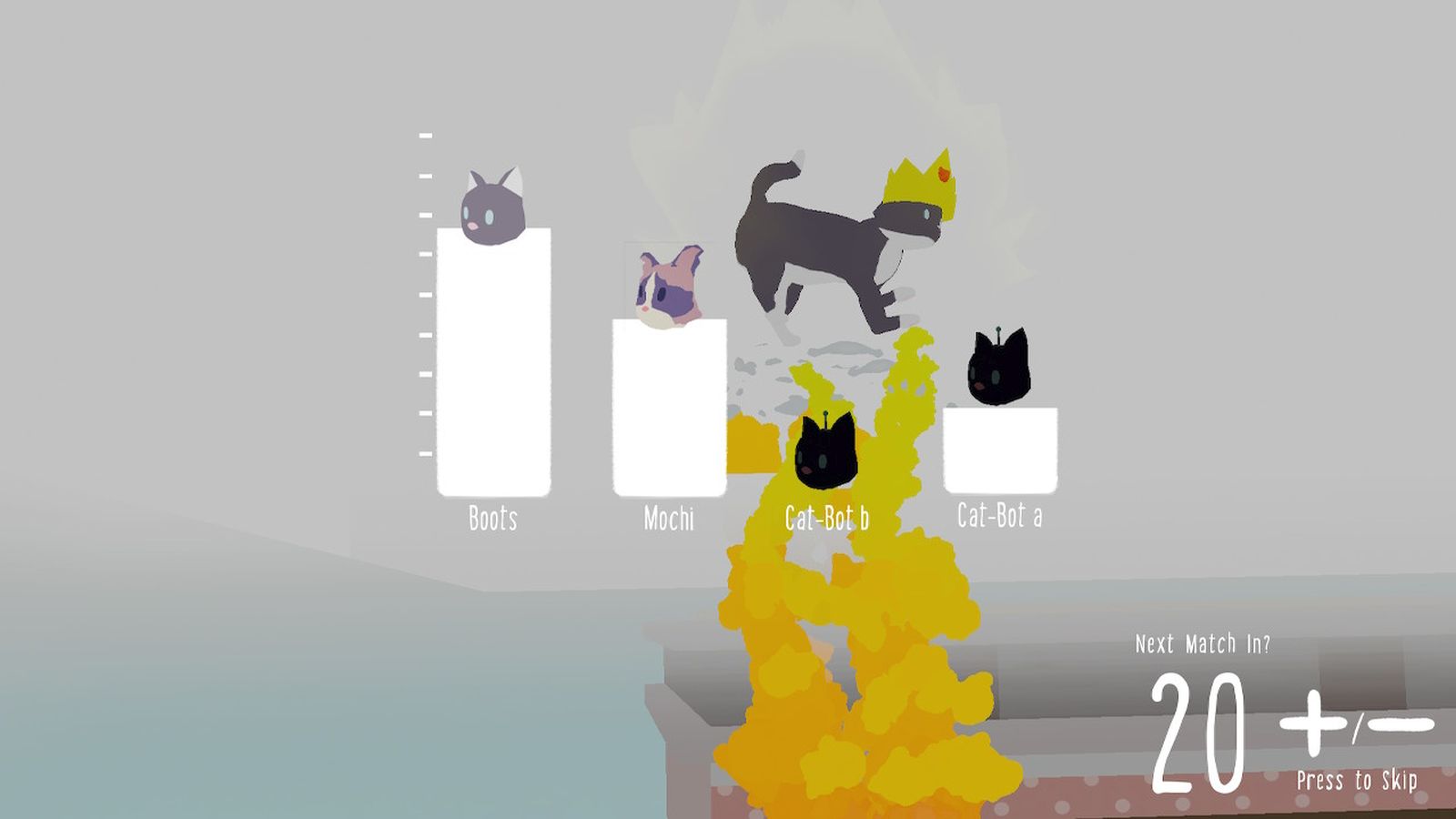 Party mode combines all the previously mentioned modes into a free-for-all battle between cats, with the cat who wins the most game types being crowned the winner. The game types are randomly selected each round, and sometimes feature shortened versions of the games – such as destruction with a much shorter time limit, etc. Each round ends with a statistics screen which shows the rank of each cat and how many wins are needed to be crowned the ultimate cat. You can change the number of wins required.

Every time a cat wins a match they take off – literally – with rocket paws and fly away, leaving the other cats alone on the ground. It’s ridiculous – I loved it. Wins also unlock new customization items such as hats and eyewear. 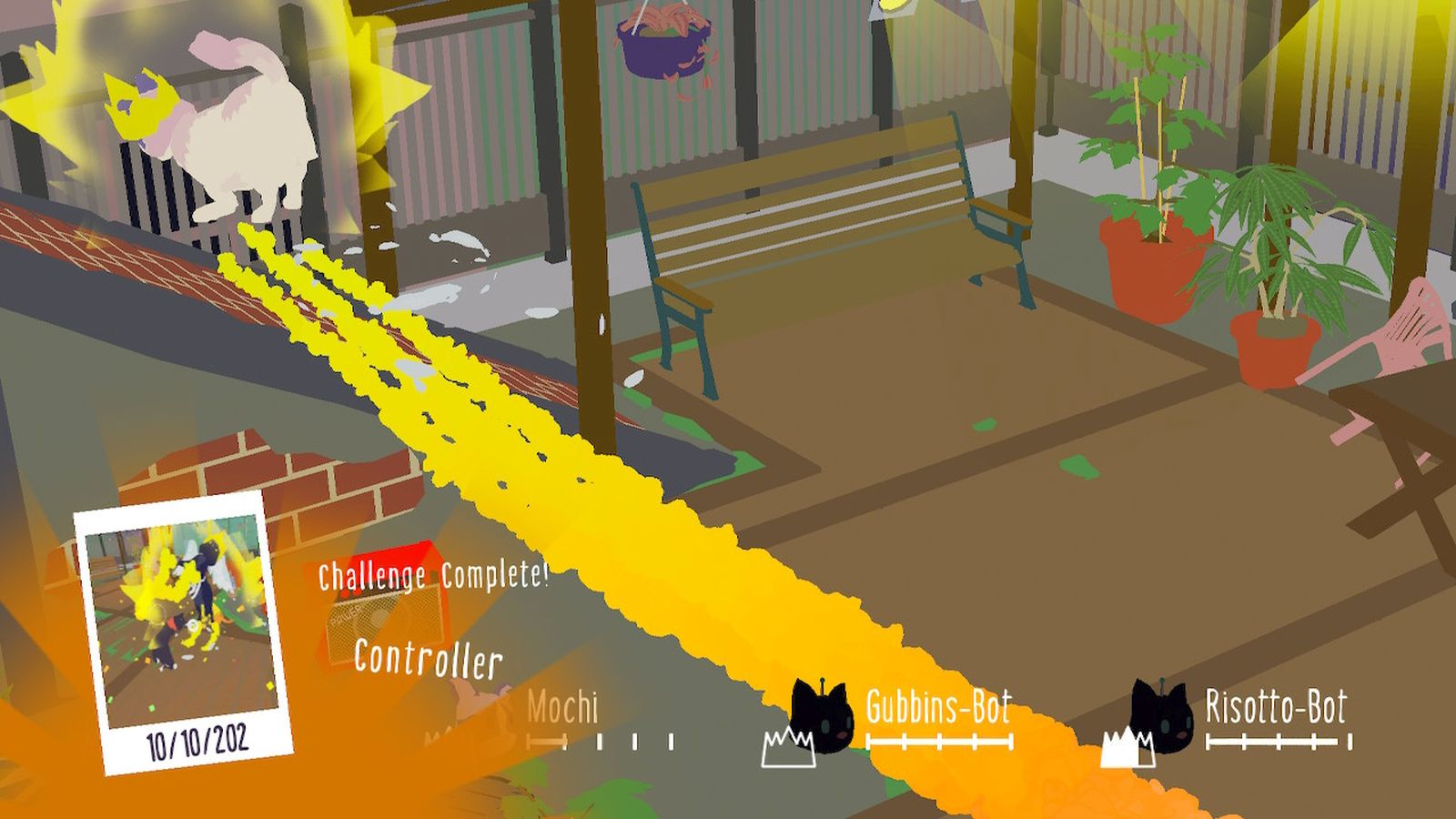 While I enjoyed my time with Fisti-Fluffs, it is a party game and as such is great to kill an hour or two, but most players won’t find much to keep them coming back multiple times. Worse yet, despite the cute – but not terribly complex – graphics, I encountered a disappointing amount of slowdown and stutters, especially when playing with four players. The slowdown was so bad at times that the cats were more teleporting across the screen than running. Oddly enough, this slowdown did not happen every match, so I’m not sure if it was certain levels or some other aspect of the gameplay which caused it, but it happened enough to be noticeable and frustrating. A few times the bot cats would freeze and just quit fighting, and I’m not sure why. I’d swipe at them a few times and usually that would get them back into the brawl, but sometimes they stood there until knocked out.  I also encountered a weird glitch during Party Mode where every time a Destruction level came up the timer ended immediately and the first player won no matter what, never letting anybody else participate. This happened multiple times, but only during Destruction levels.

While the glitches and slowdown don’t ruin the game, they are disappointing. In a game requiring more strategy I’d be harsher, but all it really does here is add a layer of frustration to a few of the matches – I doubt anybody will win or lose a match solely due to any of the previously mentioned issues aside from the Party Mode automatic Destruction wins.

While hilarious and fun for a couple of hours, Fisti-Fluffs players will be hard-pressed to find many reasons to come back after a night or two of entertainment. Still, the hilarious win animations, variety of modes, customization options, and killer metal soundtrack make for a good night in. While there are a few issues with slowdown and bots freezing, none of these ruins the experience enough to worry about in the long run.

Richard Allen is a freelance writer and contributing editor for various publications. When not writing for Gaming Trend you can find him covering theatre for Broadway World, movies and TV for Fandomize, or working on original stories. An avid retro gamer, he is overly obsessed with Dragon's Lair. Chat with him via @thricetheartist on Twitter and @richardallenwrites on Facebook and Instagram.
Related Articles: Fisti-Fluffs
Share
Tweet
Share
Submit