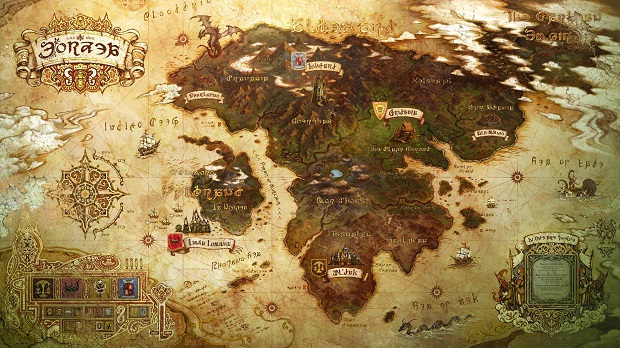 If you had told me in 2000 that I’d be reviewing Final Fantasy 14: A Realm Reborn on PS4, I would’ve whizzed my cargo shorts. I was wrapped in the immense realms of the Final Fantasy series, playing through my still-favorite game Final Fantasy VI repeatedly while absorbing sequel after sequel. I couldn’t get enough. But once the series hit about game 11, my addiction started to wane. My obsession, along with my cargo shorts, were behind me. Now that I’ve spent a large amount of time with Final Fantasy 14: A Realm Reborn, I have to say that while it is impressive, it’s not quite enough to get me hooked on that great white chocobo again.

The team at Square Enix put a great deal of work into making the game look and feel as much like a Final Fantasy game as possible. Angelic music and a medieval meets sci-fi aesthetic unmistakably grounds the game in the Final Fantasy universe, and hovering between 30 and 60 FPS at all times, that universe looks and runs beautifully on PS4.

You’ll see throwbacks to many series staples in A Realm Reborn. Chocobos, Magitek Armor, moogles, and a materia system make more than passing appearances in the game. It never feels like direct fanservice; everything about A Realm Reborn feels like it fits within the confines of the game’s own universe.

At times I got lost in the vast world of Eorzea – As in literally lost. The layout of cities is confusing early on, and even with objective markers, finding the right set of stairs or door to get where you need to go can be a trial. Eventually I found that teleporting around the map at a small fee was the way to go, but as I warped across the world I found myself appreciating the beauty of the game less and less and was just more focused on getting from point A to point B.

Initially I was worried about how A Realm Reborn’s controls would make the move to console after playing it on PC, but while the transition isn’t quite seamless, I would say the game controls surprisingly well. Intuitive and mostly responsive touchpad support makes navigating menus on screen simple. Even though it’s obvious that serious thought was put into how to best utilize the DualShock 4 for Final Fantasy 14, I found myself longing for the ease of control of a mouse and keyboard, which luckily the PS4 version of A Realm Reborn supports.

Instances (dungeons separate from the main game which only party members are allowed in,) are visually stunning, but I never found them very fun. Objectives consist mostly of simple switch pushing with a lot of killing mobs in between. Because instances (or as the game calls them, “duties”) are the best way to get stronger equipment, you’ll find yourself repeating duties over and over later on in the game. The matchmaking system for finding duties is efficient and takes about 10 to 20 minutes to find a party, and players can continue completing quests while waiting to get matched with a balanced party.

Experience is in abundance in Eorzea. Repeatable quests called Levemetes are available in almost every city, hunting logs are automatically updated with experience rewards for taking down specific beasts, large battles called “Fates” that take place in the overworld map pit large groups of players against monsters too strong for any one player to take on, and the game even suggests quests for players each time they boot up the game. The satisfaction of that next ding is never beyond your grasp.

Quests are varied, sometimes to the game’s detriment. Some bizarre quests even had me using emotes to attract NPC’s through escort missions. Others had me typing out messages to guards. While on the PC version, these would have been a breeze, switching to the emote menu to attract an NPC that seemingly had no regard for its own life or opening the text entry window to talk to a motionless citizen with the Dualshock 4 was nothing but a pain.

Community is a large part of the MMO experience, and this is where A Realm Reborn really falls flat in its transition to consoles. Marking targets for combat is simply done with a hotbar selection, but any interaction beyond that involves bringing up an onscreen keyboard and typing out your message. By the time I ever finished a message longer than, “Hey!” the relevance of my words had already expired. The lack of chat didn’t really impact my playthrough too much due to the game’s effective matchmaking, but chatting it up and blowing off steam with strangers online is my favorite part of MMO’s, and on PS4, A Realm Reborn misses out.

One of my favorite qualities of any Final Fantasy game is the series’ memorable characters, but A Realm Reborn has none. I can’t recall the name of any of the characters and while some time was put into giving characters personality, they all fell short of being memorable. I know that’s the standard for any MMO, but I just constantly wished there was a little bit more of that Final Fantasy charm in each character.

A Realm Reborn fits well into the scene of MMORPG’s today while still retaining its identity as a Final Fantasy entry. Even so, while it does have a few genuinely novel features, it fails to add much to an already stagnant genre. If you like MMO’s and are looking for that next fix, then I suggest A Realm Reborn over its competitors, but if you have the means, then I’d say you should pick up the PC version of the game.