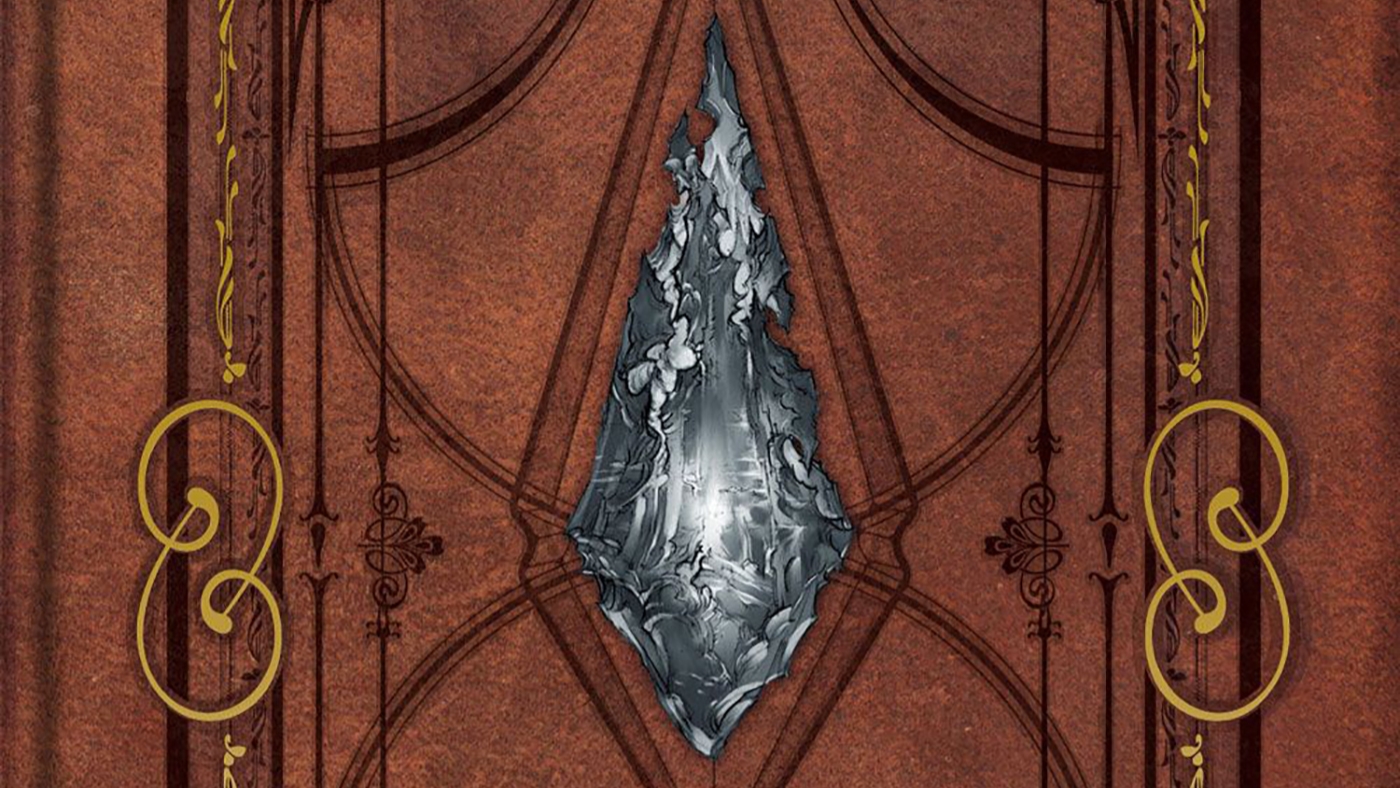 The land of Eorzea is one rich in history, to say nothing of the greater world of Hydaelyn. Its flora and fauna are just as complex as the various races and cultures that dot the landscape. For those Warriors of Light wishing to learn more of this wondrous world, look no further: the Encyclopedia Eorzea Volumes 1 and 2 will serve as companions to your own adventures upon Her star.

I’ve never been one for expanded universe media before. I enjoyed the Clone Wars cartoons as a child and read a Dungeons and Dragons book in college because it was a free audiobook, but that’s about it. I appreciate supplemental works like art books, but never got into stuff like the Halo novels – I’ve always preferred the main text and seeking out a breadth of art rather than diving into one gigantic media franchise. As you may know, however, I have a weakness for Final Fantasy XIV. It’s been a big part of my life for a long time, and I’ve grown to love the world and people it contains. While just playing the game can introduce you to a lot of the lore, it’s largely unorganized and hidden behind NPC dialogue or item descriptions. While some information is out of date thanks to huge revelations in the main story, the Encyclopedias Eorzea present a staggering amount of knowledge about a fictional world for those who can’t get enough. 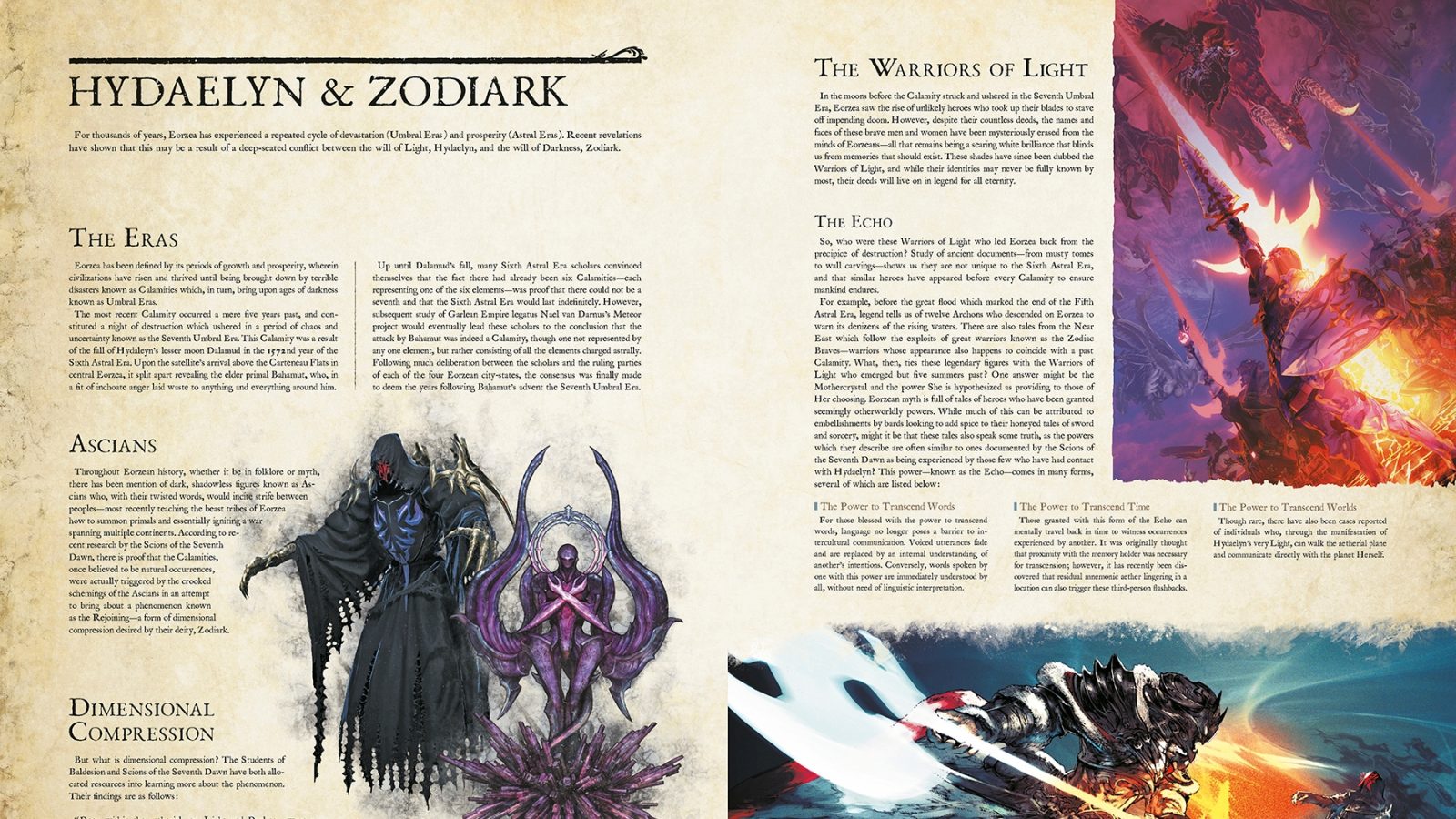 Starting off with the cover, each volume mimics the appearance of a leather bound tome; the first brown, and the second red. Both have intricate designs on the cover with embossed lines and a glossy crystal at the center. There’s no advertisement or text of any kind on the reverse- if you bought this, you know what it is so the outer shell focuses more so on pulling you into the world.

The books themselves are written from the perspective of what I presume are multiple scholars (no, not the Job) within the world. The first tome includes the basics of the world such as aetherology, short guides to each city state, bios of major NPCs, mythology, where each Job comes from, and even a bit on the Dragonsong war. The second places its gaze more on the locations, people, and things introduced in Stormblood. From what I can tell, neither book repeats information from the other, at least not in larger sections, and they compliment each other nicely. 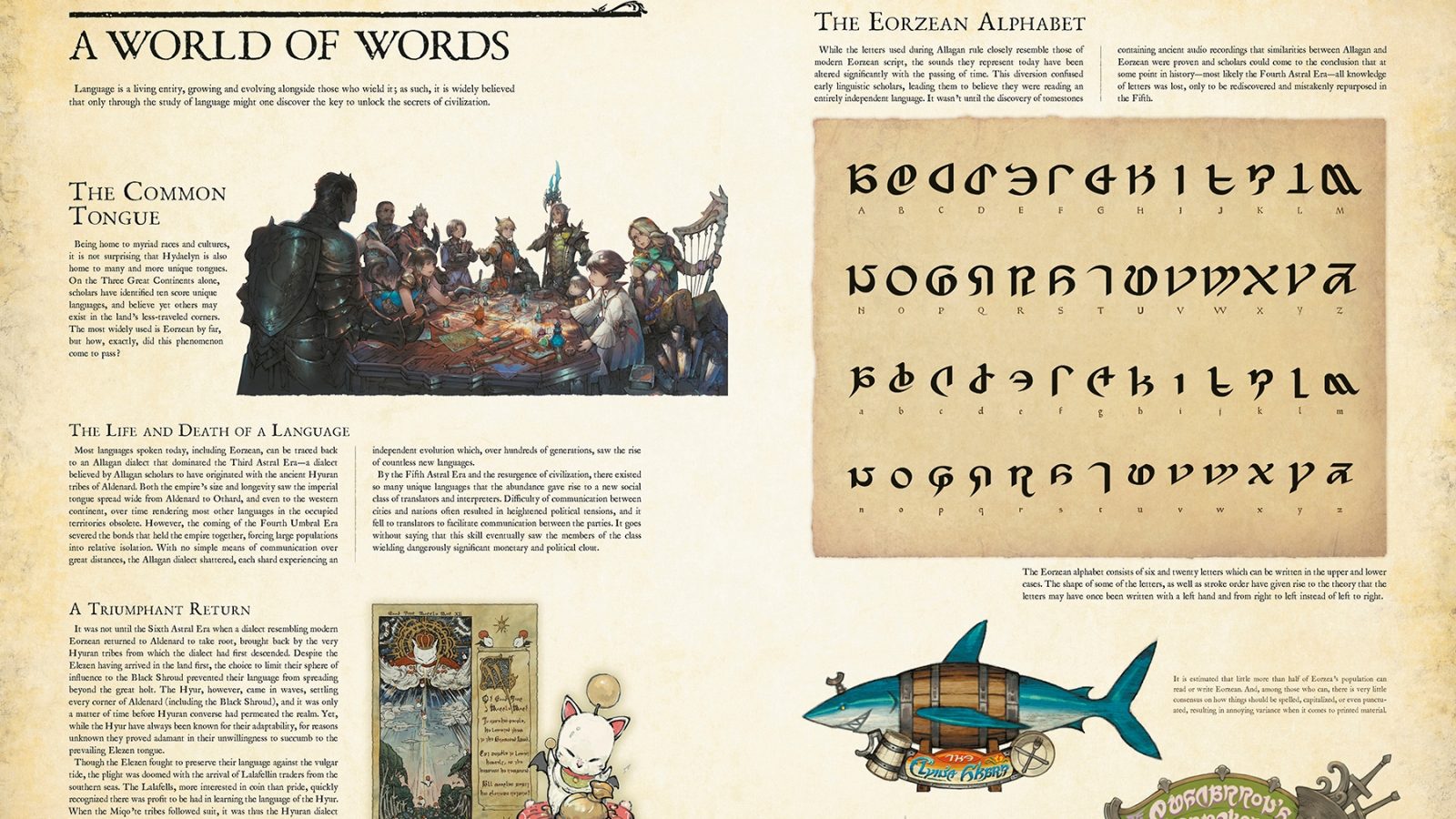 Whether you find the contents interesting is up to you, but I found it well worth a read or just a skim because these books are DENSE. Each book is about 300 pages filled with lore and some great artwork to accompany it. Generally I would prefer to read a self contained novel of the same length, but I’m glad I have these as reference if I ever encounter something in my adventures I’d like to know more about. They’re definitely a harder sell than the art books, but if you enjoy the finer details of the world even a little these are just fun to dive into.

Final Fantasy XIV’s Encyclopedia Eorzea Volumes 1 & 2 are aimed squarely at those who want to immerse themselves into the MMO’s world, while still holding enough interesting information for more casual readers as well. There’s a lot to enjoy here, and even though some information is out of date now they serve as a fun read, if you take it in short sections.

David is the kind of person to wear his heart on his sleeve. He can find positives in anything, like this is a person who loved Star Fox Zero to death. You’ll see him playing all kinds of games: AAAs, Indies, game jam games, games of all genres, and writing about them! Here. On this website. When not writing or playing games, you can find David making music, games, or enjoying a good book. David’s favorite games include NieR: Automata, Mother 3, and Gravity Rush.
Related Articles: Final Fantasy XIV Encyclopedia Eorzea Vol. 1 & 2, MMO
Share
Tweet
Share
Submit