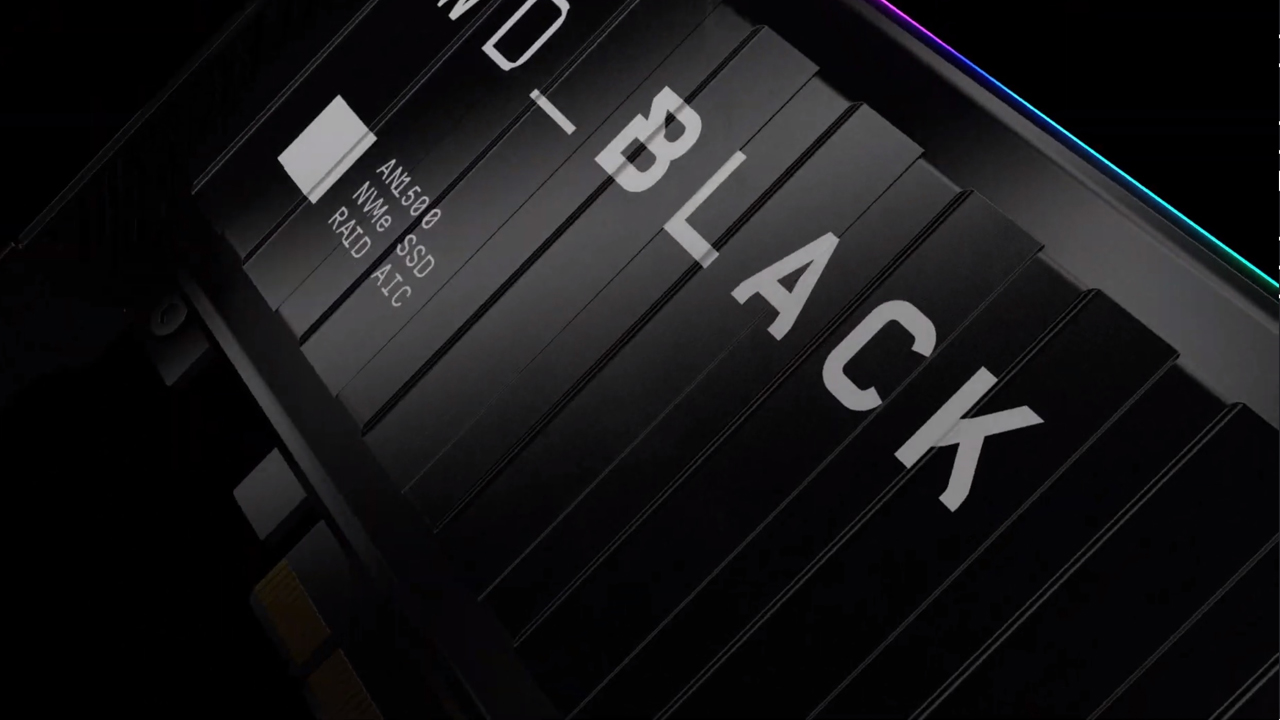 There is a great deal of focus on drive speeds as consoles move from spinning mechanical drives to NVMe SSDs. We as PC gamers have been enjoying a wider variety of drive varieties for some time but the newest consoles are putting up some impressive numbers. Is it time for a leap forward for PCs? Let’s plug in the WD_Black AN1500 and take a closer look.

Getting into the weeds, the PlayStation 5’s drive can hit 5.5 GB/s read speeds using a PCIe 4.0 NVMe drive, with the Xbox Series X using a proprietary drive that hits 3.75GB/sec. Both of these numbers are punching above the weight class of most home PCs, so it’s worthwhile taking a look at where this newest drive from Western Digital fits in.

Before we dig into this card, let’s talk about the three primary storage levels on the consumer market today. SATA hard drives are your largest drives, offering upwards of 14TB of space, but maxing out at a theoretical maximum of around 150MBps with a seek speed of around 3.5ms before the first byte is read — unsurprising as the SATA standard was debuted in 2009. Next up is SATA SSDs. These drives are non-mechanical solid state drives (that’s what SSD stand for) and deliver a significant speed upgrade delivering 550MBps and at a 0.2ms seek, drastically reducing the amount of time to first byte. All that said, it’s the NVMe SSD that’s making such a massive change in the gaming space.

NVMe stands for non-volatile memory express and most often shows up in an m.2 form factor, looking like a RAM stick with an interface that locks directly into your motherboard or onto a daughterboard card with the same interface. This form factor change delivers a staggering game-changing amount of improvements, and that’s not hyperbole. PCIe 3.0 SSDs deliver around 3GBps read and write speeds, with PCIe 4.0 pushing up to around 5000 MB/s (read) and 4400 MB/s (write) and seek dropping down to an eye-popping 0.02ms. But what if you just upgraded to a X490 Intel board? Unfortunately there are no PCIe 4.0-enabled X490 boards, save a few extraordinarily overpriced examples, with Intel fans having to wait until the X590 and Rocket Lake processors to finally jump on that train. AMD has less of a problem, with their current B550 and X570 boards supporting PCIe 4.0 already. But what if you want access to these higher speeds right now?

Western Digital’s gaming division, dubbed WD_Black, has an ace up their sleeves with the AN1500. Advertising read speeds of 6000MB/s, that would put it in a class all on its own. Better still, it does it without requiring PCIe 4.0 support. I cracked open my close-to-full PC and placed the card into my third PCIe slot. Running my usual suite of benchmarks, I was immediately disappointed with what I saw. 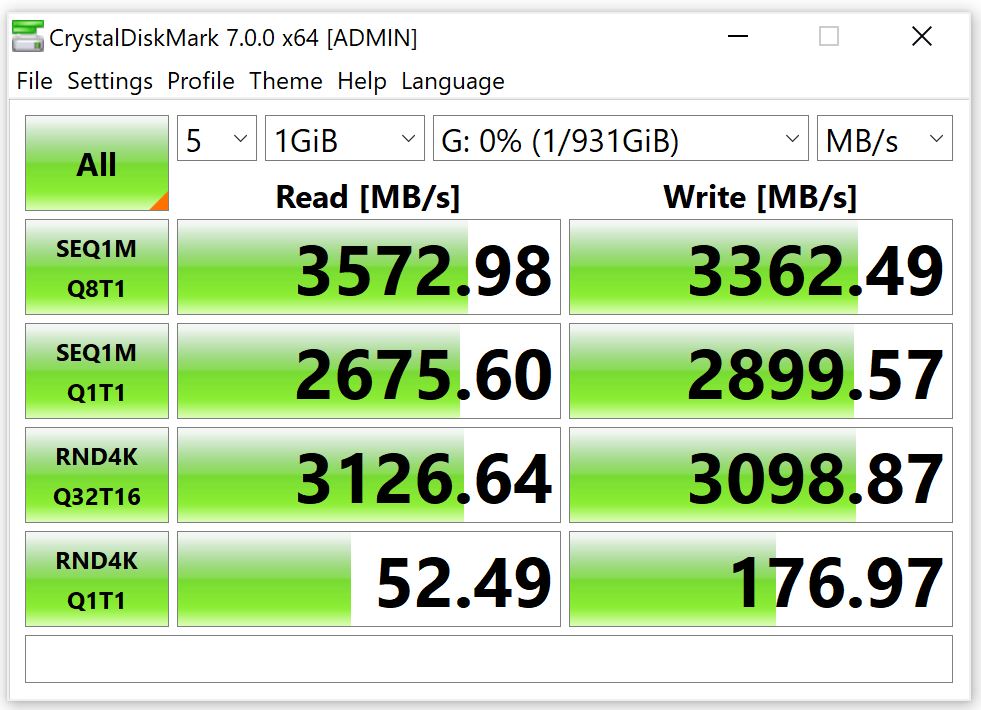 Something isn’t quite right…

Surely that couldn’t be right, could it? Well, it turns out that this was entirely my fault. My motherboard is a GIGABYTE Z490 AORUS Ultra, and while it’d be awesome if every PCI slot was X16, that’s not the reality we live in. The first slot is X16 (occupied by my video card), the second slot is X8, and the last slot is X4. There are motherboards that are capable of X16 in the first two, or even three card slots, but that doesn’t change the fact that the Intel processor only has 24 lanes, and AMD’s Ryzen platform pushes that to 28 lanes. Some additional lanes come from the chipset, which is good because m.2 drives will soak up 4 of them. All of this is to say that juggling my capture card and the AN1500 and re-running my benchmarking suite yielded very different results. 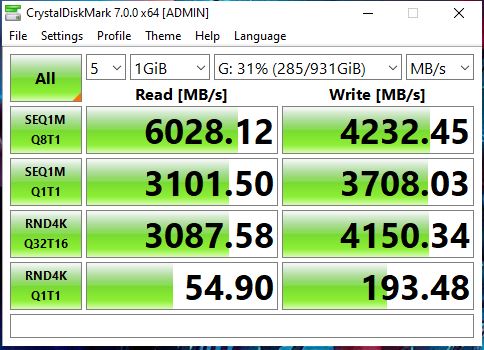 Whoa! There we go! 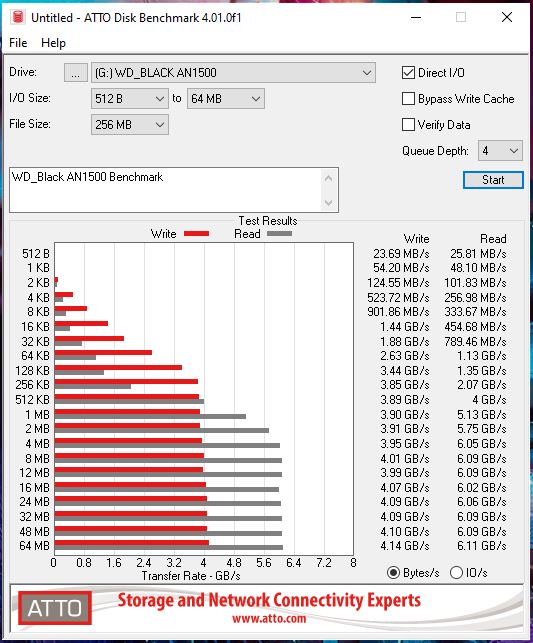 A little confirmation from ATTO

Now we’re talking! The box advertises 6000MB/s, and it delivers precisely that. Looking closer at ATTO, it also reaches these speeds at a blistering pace. The big question, of course, is how that affects load speeds in games, so I decided to put Assassin’s Creed Valhalla to the test.

What’s interesting here is that we have almost precisely the same speeds for a Gen 3 NVMe as we do for the AN1500, despite being literally double the speed. The games are likely optimized for loading on an NVMe, and thus realize little benefit of a faster one. Where we see the real difference is in real-world applications like video editing and file copies. Check out the video above for just a few examples of how this card has fundamentally changed my workflow speed.

What drives all this speed in the AN1500, you ask? Under the hood lies two NVMe drives (specifically Western Digital SN730 NVMe SSDs), as well as a Marvel 88NR2241-BWW2 NVMe hardware RAID controller running in RAID0 for maximum speed. To ensure the device is responsive and low-latency, they’ve added a hefty DRAM cache courtesy of an 8GB Micron DDR 4 chip for each of the drives.

If you are unfamiliar with the concept of RAID 0, data is written across multiple discs, increasing speed because multiple drives are reading and writing data simultaneously. Normally this is set up by the end user, requiring a little bit of knowledge of RAID containers and a dive into the BIOS. The WD_Black AN1500 skips all of that to keep things simple, locking the device into RAID0 with no configuration required. That does mean you don’t get to tinker under the hood, but if you prefer your devices just work right out of the box, then you’ll be happy that this device is essentially plug and play.

Running in RAID0 raises the speed of inputs and outputs for the device, but that has a cost — there is no redundancy. If one of these two drives fail you lose the data on both. Like the RPG mantra says, “Save once, save often” — backups are a must. This leads me to one of the best things about this drive — the 5 year warranty.

When reviewing hard drives, too often do I see a 1 year warranty, and I’ve even seen a 90 day warranty on a few. I’ve had great success with the big names and their drive resilience, but it’s good to have peace of mind that when something goes wrong you’ll find support. Western Digital warranties the AN1500 for a full five years.

In terms of power draw, the AN1500 pulls roughly 8.5 Watts when idle, and jumps up to 15.7 Watts when reading and writing. This makes sense as an NVMe drive uses 7 Watts, limited by the M.2 specification, and there are two drives, plus the controller — the math checks out.

With all of the recently launched consoles, I’ve been processing a lot of 4K/60 footage, and the speed offered by the AN1500 has been a godsend. The read and write speeds are a big factor in editing video, allowing me to scrub through video footage at full speed. Synching up two 4K videos means running two 4K/60 feeds simultaneously. I’ve done this on mechanical drives in the past, and I can safely say I’ll never do that again as the stuttering and pausing is a nightmare.

You may be wondering how this drive stacks up to others, and it just so happens that I have a few to test. Sure, I could bench it against Gen 3 drives, but with the AN1500 running in RAID0 that’s hardly fair, but neither is life — a Gen 3 SSD will run around 3300/3300 read/write, and the AN1500 eats them for lunch. Compared against a Gen 4 SSD, however, the numbers are far more close. Able to reach 5000/4200 read/write, Gen 4 NVMe drives are amazingly fast, but only AMD has boards on the market that support PCI Gen 4. This means you’ll have to wait until Intel catches up to see those sorts of speed as a Gen 4 drive will simply revert to Gen 3 speeds. This drive obviously offers an alternative, exceeding those speeds without the need to change your processor and motherboard, or wait for whatever Intel has cooked up for eventual PCI Gen 4-enabled boards.

If you are a fan of RGB then Western Digital has you covered. The AN1500 has a multi-colored stripe that runs along the edge of the card and onto the front that pulses with a dazzling array of colors. Loading the Dashboard software will let you adjust the RGB panel directly with 13 different presets, but it’s also compatible with Aura Sync from Asus, RGB Fusion from Gigabyte, and likely others. Beyond the RGB lighting, the software dashboard also provides an impressive look at what’s going on under the hood of the AN1500 including the interface speed (to catch the hiccup I made earlier), temperature, and even an approximate life remaining to ensure you don’t get yourself into a bad situation where you could have data loss due to age.

In the end, faster reads and writes means less time rendering video, moving files, and sometimes less time waiting for games to load. Coming from a mechanical drive, or even a standard SSD, this is a no-brainer, but moving from a Gen3 NVMe to this card might not be an improvement. That said, if you need blazing fast speed, and you don’t want to be in on the inevitable rocky launch of PCIe 4.0 on Intel platforms, or don’t want to play with RAID setup, this is the way. Just make sure you’ve got an open X8 slot to take full advantage of what’s on offer.

Offering PCIe 4.0 speeds in a PCIe 3.0 card slot, the WD_Black AN1500 is an incredibly fast and simple to use add-in card that fits a very specific niche.

Ron Burke is the Editor in Chief for Gaming Trend. Currently living in Fort Worth, Texas, Ron is an old-school gamer who enjoys CRPGs, action/adventure, platformers, music games, and has recently gotten into tabletop gaming. Ron is also a fourth degree black belt, with a Master's rank in Matsumura Seito Shōrin-ryū, Moo Duk Kwan Tang Soo Do, Universal Tang Soo Do Alliance, and International Tang Soo Do Federation. He also holds ranks in several other styles in his search to be a well-rounded fighter. Ron has been married to Gaming Trend Editor, Laura Burke, for 21 years. They have three dogs - Pazuzu (Irish Terrier), Atë, and Calliope (both Australian Kelpie/Pit Bull mixes).
Related Articles: Hardware, WD_BLACK AN1500 AIC
Share
Tweet
Share
Submit