I’m a huge fan of surprise releases on the eShop, and nothing excited me quite like new developer Nano Piko stealth-dropping their new title PictoQuest on the Switch a few weeks ago. Dubbed a Picross-RPG, the game is an oddly entertaining mashup of the two genres, even if they both end up being surface-level in quality at times. 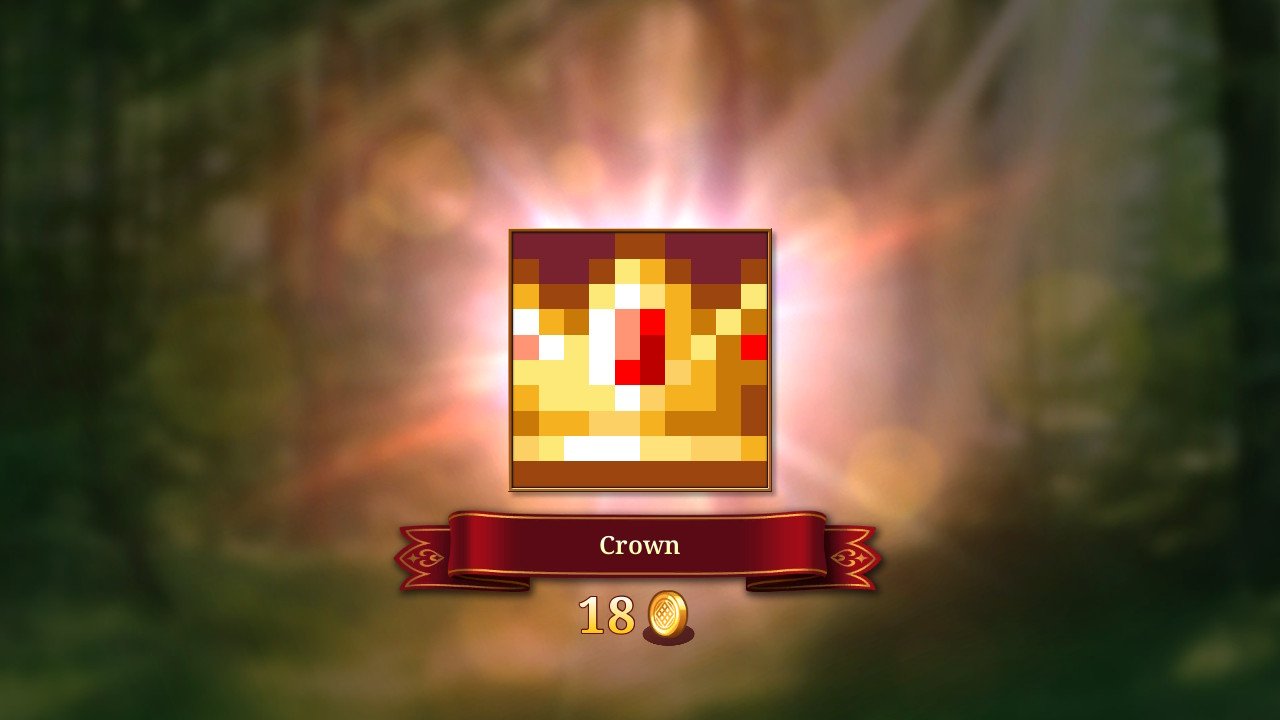 In PictoQuest, you play as a guy or girl on an adventure to save your land from the forces of evil. On the way, you’ll encounter a variety of puzzles to solve and enemies to defeat, alongside NPCs which grant you quests. The gameplay mainly follows the classic puzzle game Picross, just with a fantasy-themed setting. There are numbers that you’ll need to fill into a grid, with the restriction that filled squares cannot touch each other. I really miss the prime time that Sudoku and Picross ruled the roost during the original DS era, so it’s great to see some more of these titles on the Switch.

The thing that separates PictoQuest from the other competition is the fact that there are now monsters you’ll have to defeat in certain puzzles; you dole out an attack with every line you fill correctly, and hesitating to act or mistakenly filling a square that wasn’t supposed to be filled will cause an enemy to attack you. If your hearts go down to zero, you have to start the puzzle over again. If you think a certain puzzle is too hard, you can also grab some one-time consumables that you can use to assist your journey (like a potion to gain life or a fire spell that will reveal tiles for a time). There are certain item shops scattered around the map that will sell these items plus some permanent upgrades like increased max health for coins, which you can earn by clearing puzzles. (Protip: puzzles with only treasure chests will grant more coins if you don’t screw up, plus you get the benefit of not dying from enemies). 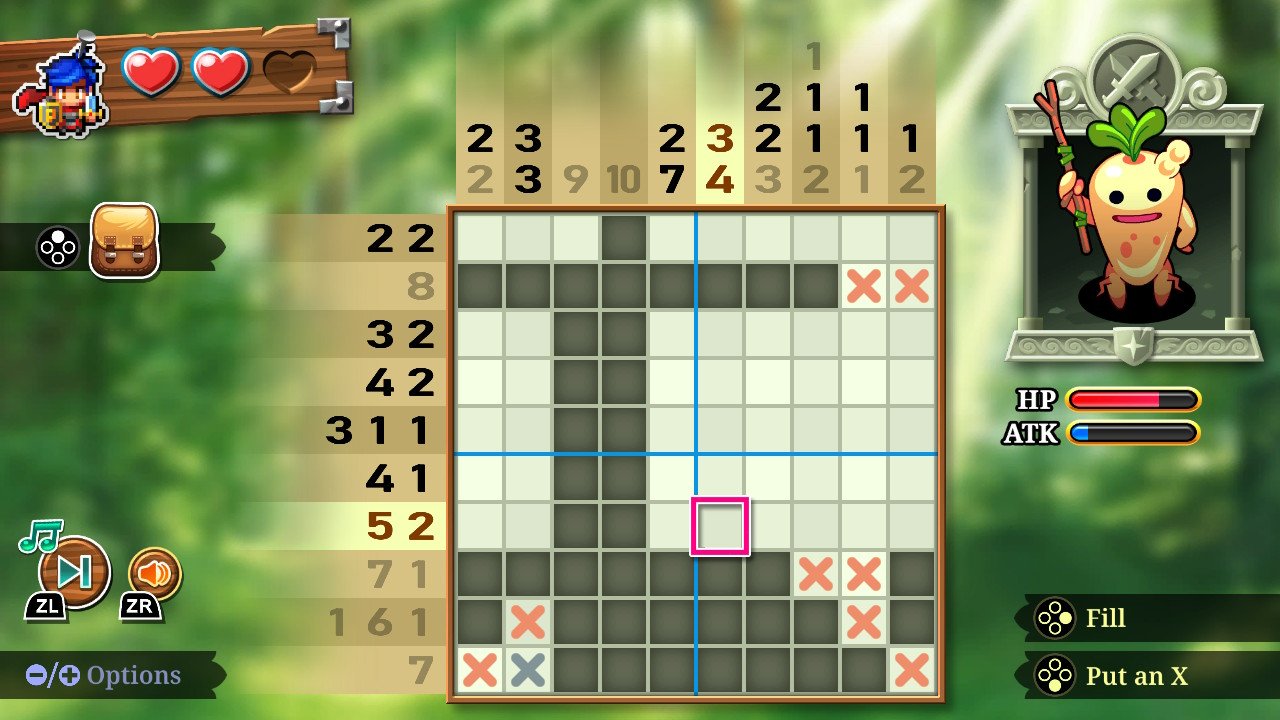 While I do like the new spin on Picross here, PictoQuest does falter with its action elements; while I had no trouble navigating enemies on easy 5X5 and 10X10 grids, when the game started dishing out 15X15 grids, I had a tough time managing my items, grids, and enemy carousel at the same time. (Enemies have different attack gauges, so you can cycle through each one just when they’re about to attack, countering a would-be hit), However, this increased pressure just ended up making me miss more, and sometimes even intentionally missing for a chance of making the attack miss (it’s an RPG after all, it wouldn’t make sense for enemies to hit every single time). It’s a good effort, but the game feels like it’s trying a bit too hard to differentiate itself here. 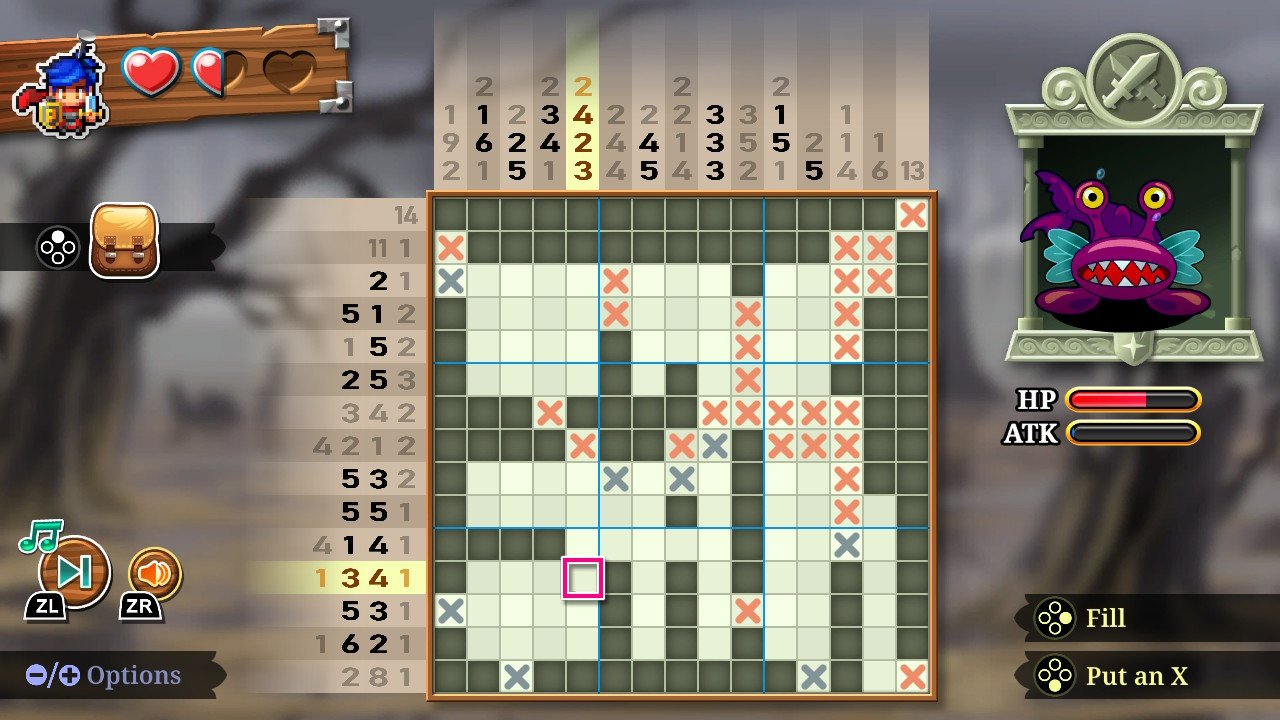 As for the presentation of the game, it’s pretty solid. The music is mellow enough to not be intrusive (which is a godsend in puzzle games), but has a jaunty little variety that makes the experience pleasant. I do like the backgrounds and stylized graphics of the whole affair, and the enemy designs look pretty neat. Technical issues are virtually nonexistent, and the game operates at a solid clip, which you can check out in my let’s play above. There is one minor thing that I wish they could add, and that’s touchscreen support for handheld. While I did enjoy the game docked and undocked, I just think the game would be perfect with touch controls, especially with the easier, bigger grids.

If you’re looking for a fun Picross title to play for an affordable price, PictoQuest has got you covered. While a bit too overbearing with its action elements, the new mechanics and tried-and-true Picross puzzles are sure to engage beginners and veterans alike.

Elisha Deogracias is an aspiring accountant by day, freelance writer by night. Before writing for Gaming Trend, he had a small gig on the now defunct Examiner. When not being a third wheel with his best friends on dates or yearning for some closure on Pushing Daisies, he's busy catching up on shonen manga and wacky rhythm games. Mains R.O.B. in Smash. Still doesn't know if he's a kid or a squid.
Related Articles: Indies, PictoQuest
Share
Tweet
Share
Submit