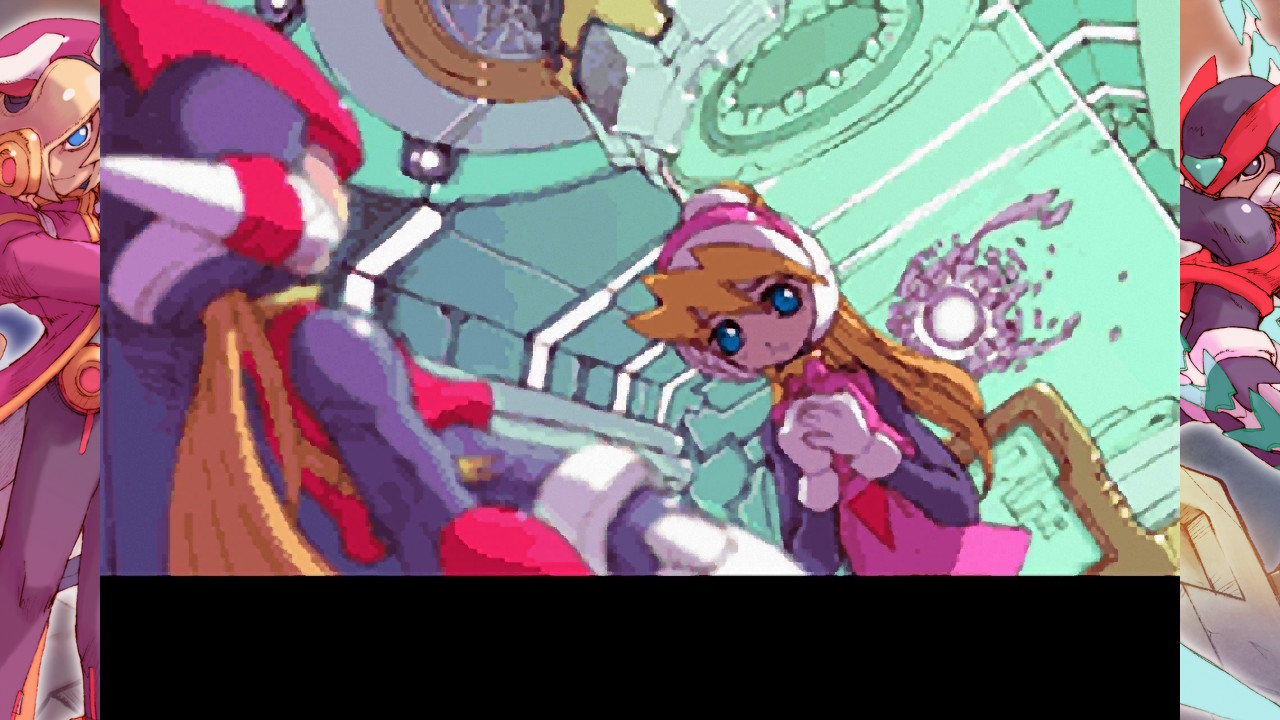 Capcom has put out several Mega Man Legacy Collections over the past few years, covering the entirety of the Mega Man series and the X series.Since the latter was released, fans speculated if the Mega Man Zero series would be next. Capcom took things a step further by not only giving fans the entire Zero series, but both ZX titles as well, effectively putting the entire main canon on modern consoles, unless you counted Mega Man Legends as being the furthest point in the timeline. But, like with previous Legacy Collections, the Mega Man Zero/ZX collection is more than just a pack of games, it’s a celebration of both series with a music player, artwork, and a new mode, “Z Chaser.” 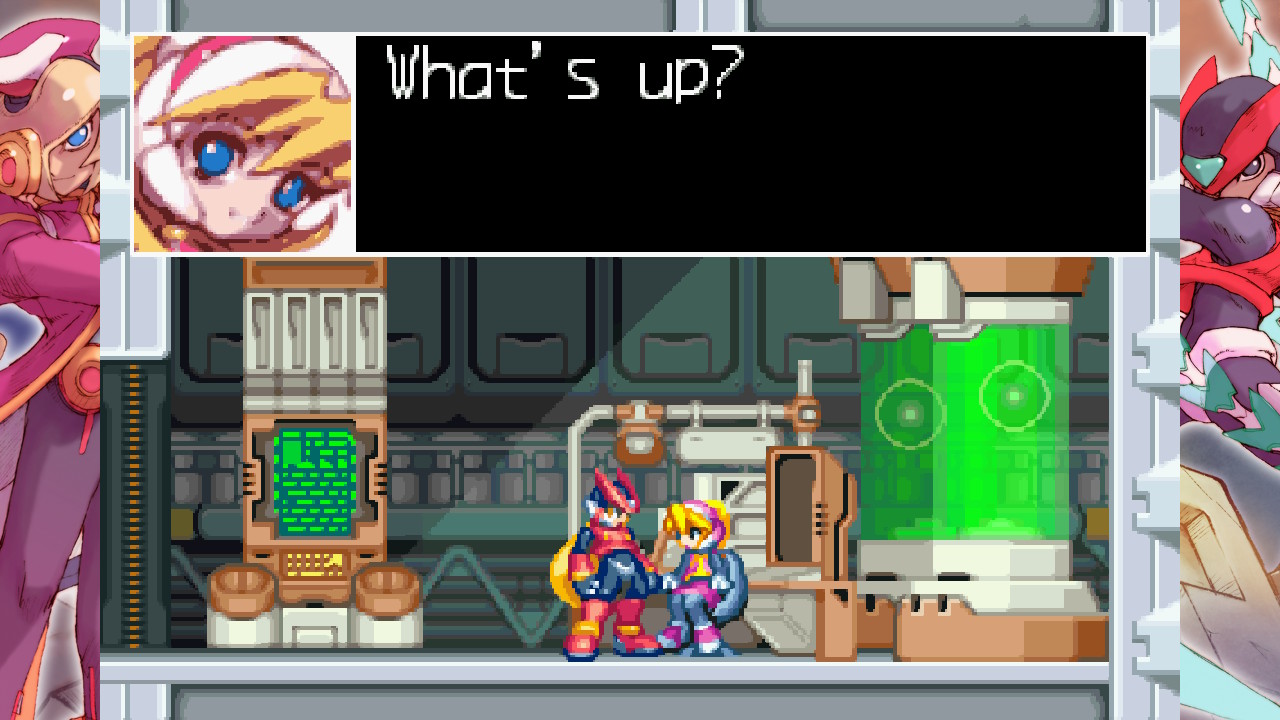 I’m ashamed to admit that I though Ciel was a reploid until Mega Man Zero 3.

When I got into the Mega Man and Mega Man X Legacy Collections I mostly knew what I was getting into. I had played almost all of those games prior and would be experiencing them as an adult in nostalgia. However, the Mega Man Zero series is something I only dabbled in, my only experience being the first Zero game on the Zero Collection for the Nintendo DS. Mega Man ZX was something new to me entirely. If you’re a Mega Man fan like me and you’re going into Zero for the first time, understand that you’re about to engage in a completely different experience. 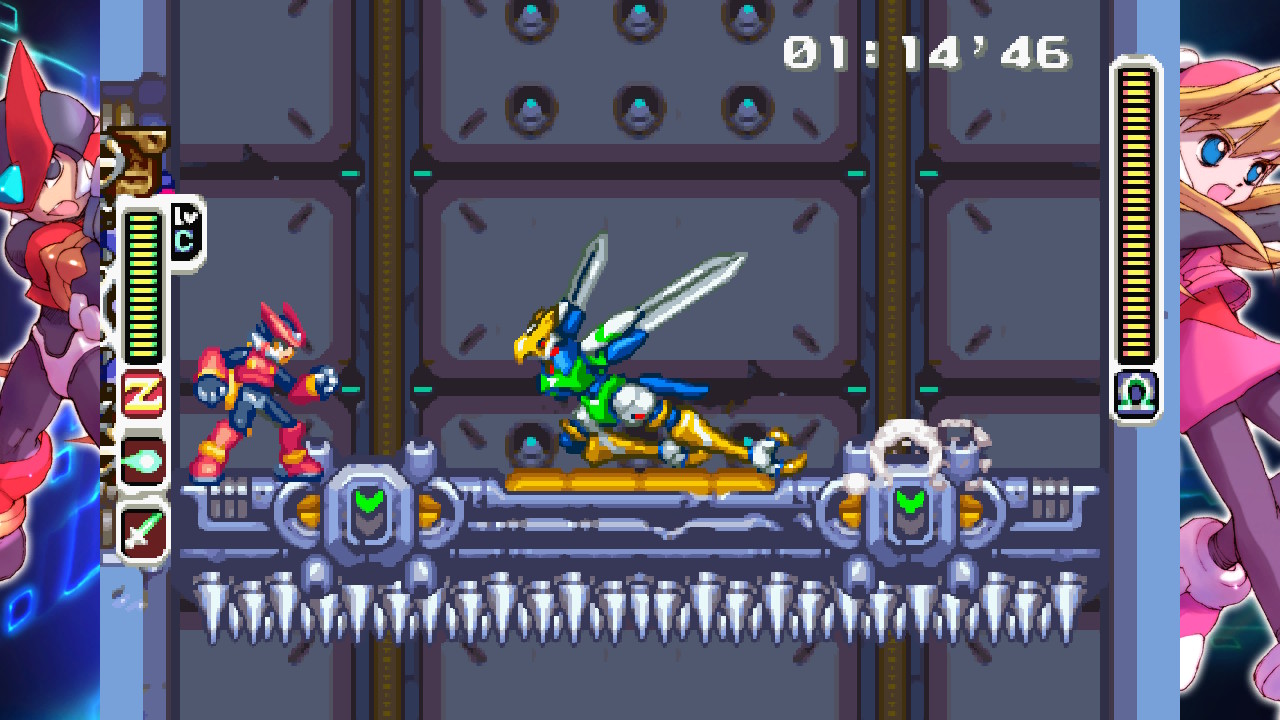 This is your first boss, and he’s there to tell you that you need to be quick and that 22XX is a dangerous time.

While Mega Man and Mega Man X were primarily run and gun games, Mega Man Zero is (somehow) faster paced, where he does more damage at the cost of having far less health. Zero is the epitome of a glass canon. Mega Man ZX is also a new experience, giving the games a more open-world Metroidvania feel rather than purely level based. Mega Man Zero allowed players to explore the world as well, but they were still primarily level based games. If you thought that classic Mega Man was difficult, you’re going to have a bad time. 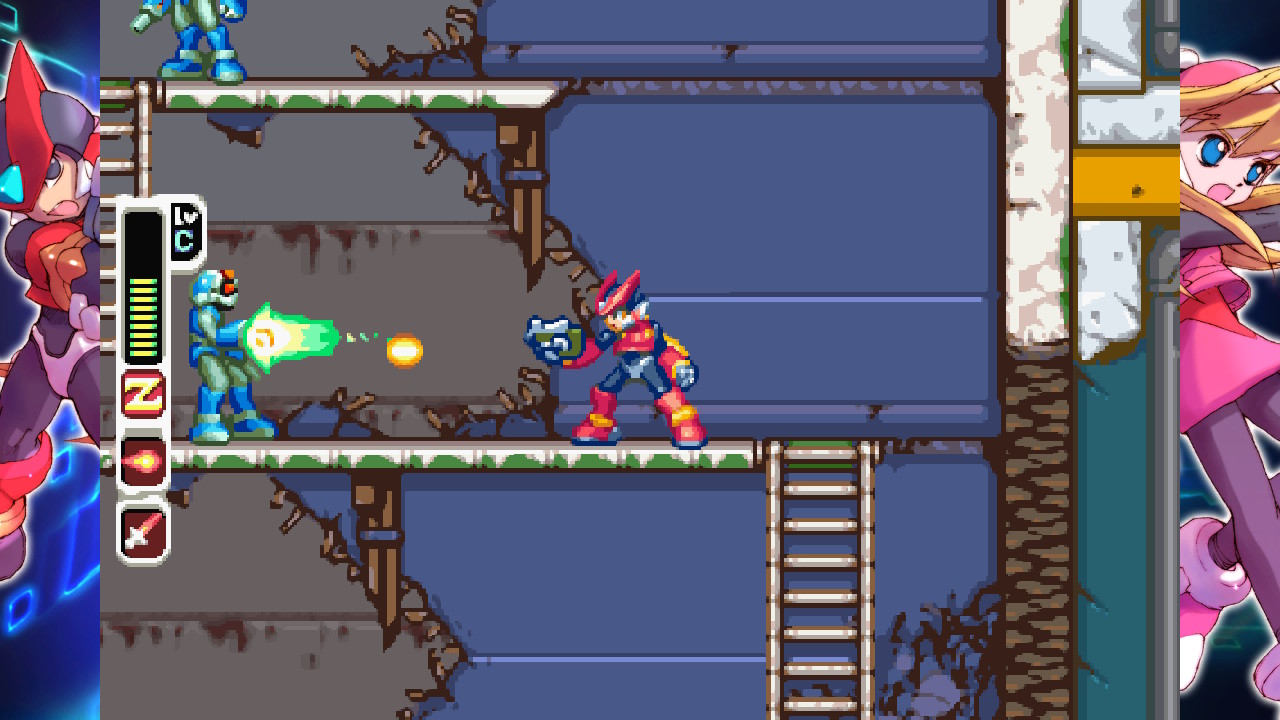 You start out with just a buster and your Z saber, but you’ll also have a boomerang shield and another weapon for the rest of the Zero games.

The Mega Man Zero series, especially the first game, is brutal. You have less health, the view is narrowed compared to previous games, and in the first game, running out of lives means failing that mission permanently. This last point went from making the game difficult to absurdly frustrating. You could also use “Cyber Elves” to permanently enhance your abilities or heal yourself, but that resulted in your ranking going down, which also resulted in not getting “EX skills” in Mega Man Zero 2 and Mega Man Zero 3. While the Zero games are brutal, the collection on the DS helped ease the pain by giving players a “casual scenario” that gave you every Cyber Elf upgrade. Though, this only ended up making the game too easy. 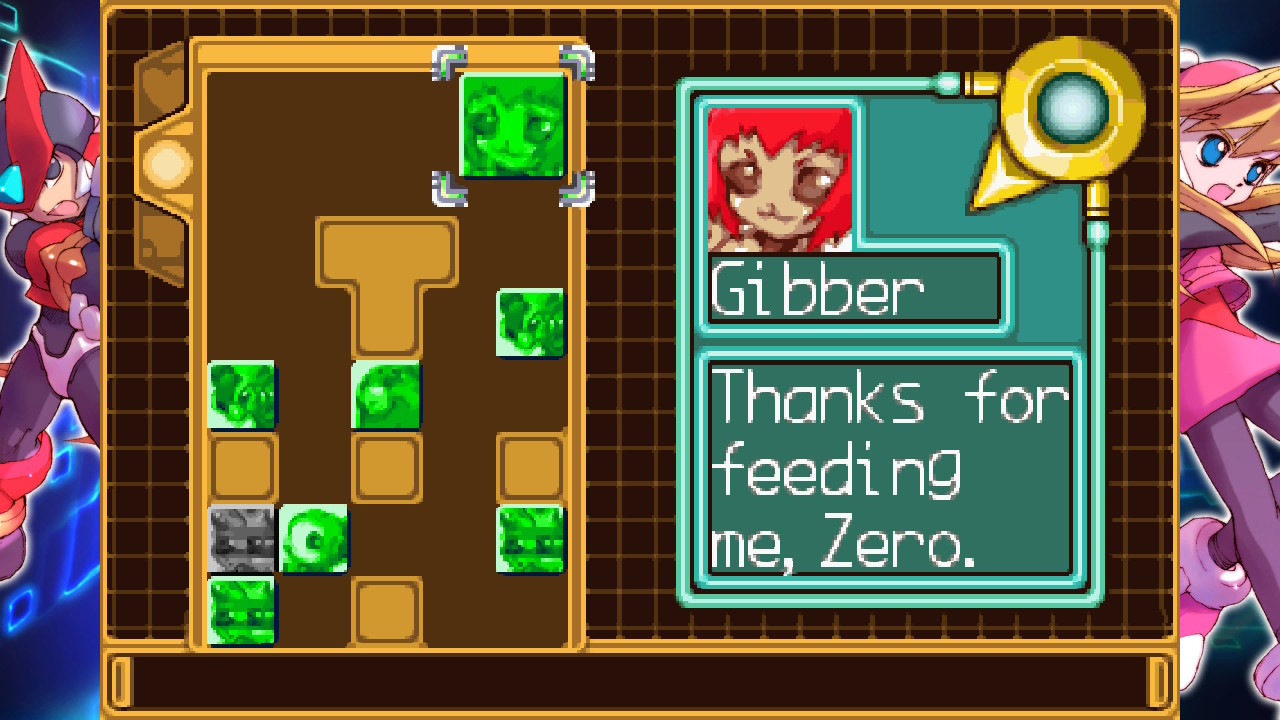 Did I mention that using elves lowers your rank and locks you out of some EX Skills?

Mega Man Zero/ZX Legacy Collection finds the perfect middle ground for this. You can still play on casual mode to unlock every Cyber Elf, but there is a new save assist feature. By hitting these save points, you will automatically restart from them when you die, and it doesn’t count as a reset in the mission either. You’ll be able to fight the bosses and learn their patterns without forcing yourself to restart the entire mission to get a better rank. I’m not ashamed to admit this is how the majority of my playthroughs went. It was a fun challenge to still get as much as I could in a run while still getting an A or S rank and resetting if I failed. 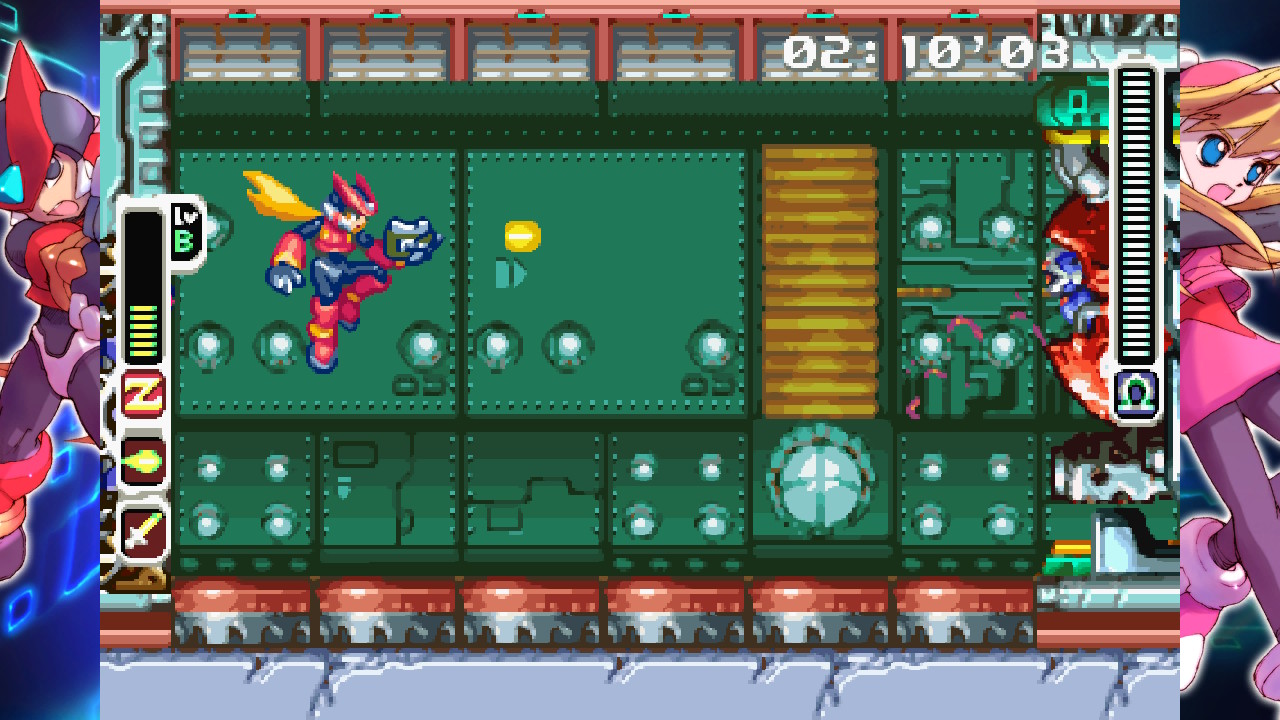 It wasn’t just the story that kept me engaged, it was the lore behind why everything is so terrible in 22XX.

There’s another thing in the Zero series that I wasn’t anticipating to be as engaging as it was, and that’s the story. Mega Man and Mega Man X’s Legacy Collections felt like actual collections of games with their own contained stories, but the entire Mega Man Zero series feels like one continuous story split amongst four chapters. The flow between games is incredible, and they only build off each other in terms of gameplay and lore. Each entry expects you to know about the previous game, while you could arguably hop into any Mega Man and Mega Man X title and figure out what’s going on. The same could be said for ZX and ZX Advent, which makes their inclusion feel like a welcome bonus. 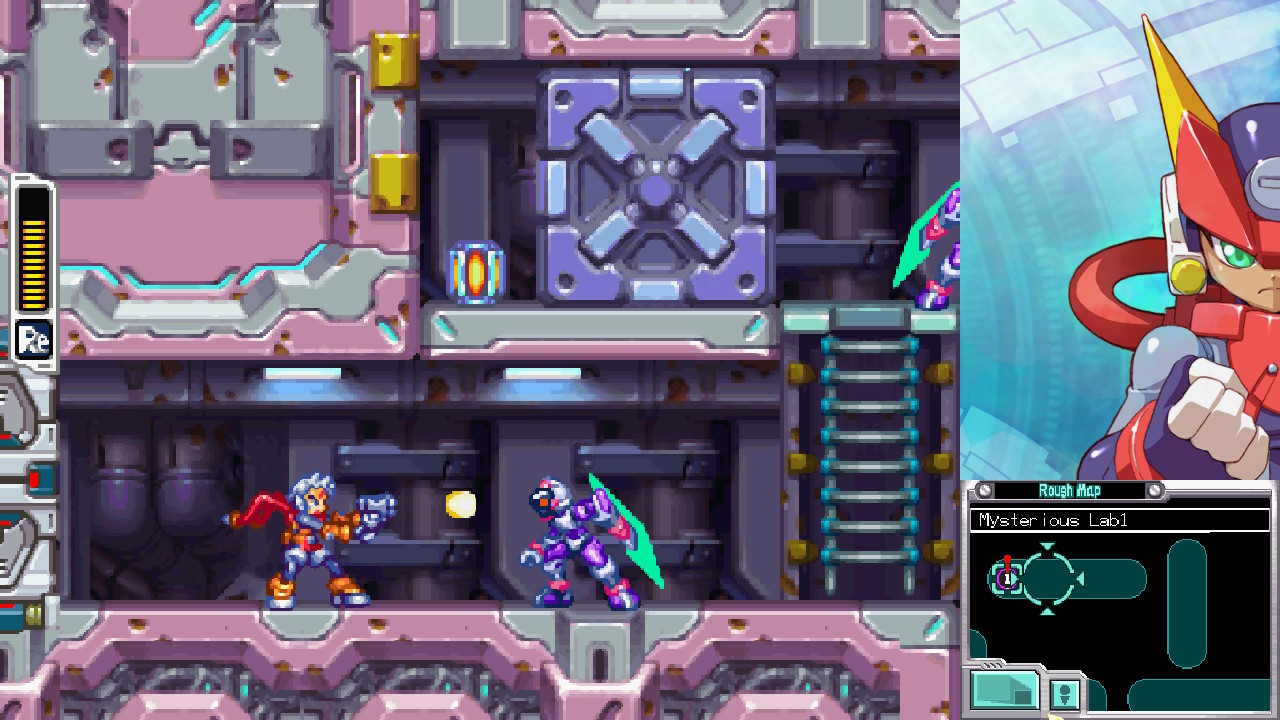 This is the layout I like, but you can also place the touch screen below, like a regular DS.

Mega Man ZX and ZX Advent were originally DS titles, which means that the collection has to take into account the second screen. With the default layout, having a second, smaller screen in the bottom right-hand corner that can be “touched” with the right stick. Despite having both screens separate on the same screen, it works surprisingly well. They did what they could to bring these games to a single-screen console, and it worked out well enough to be enjoyable. 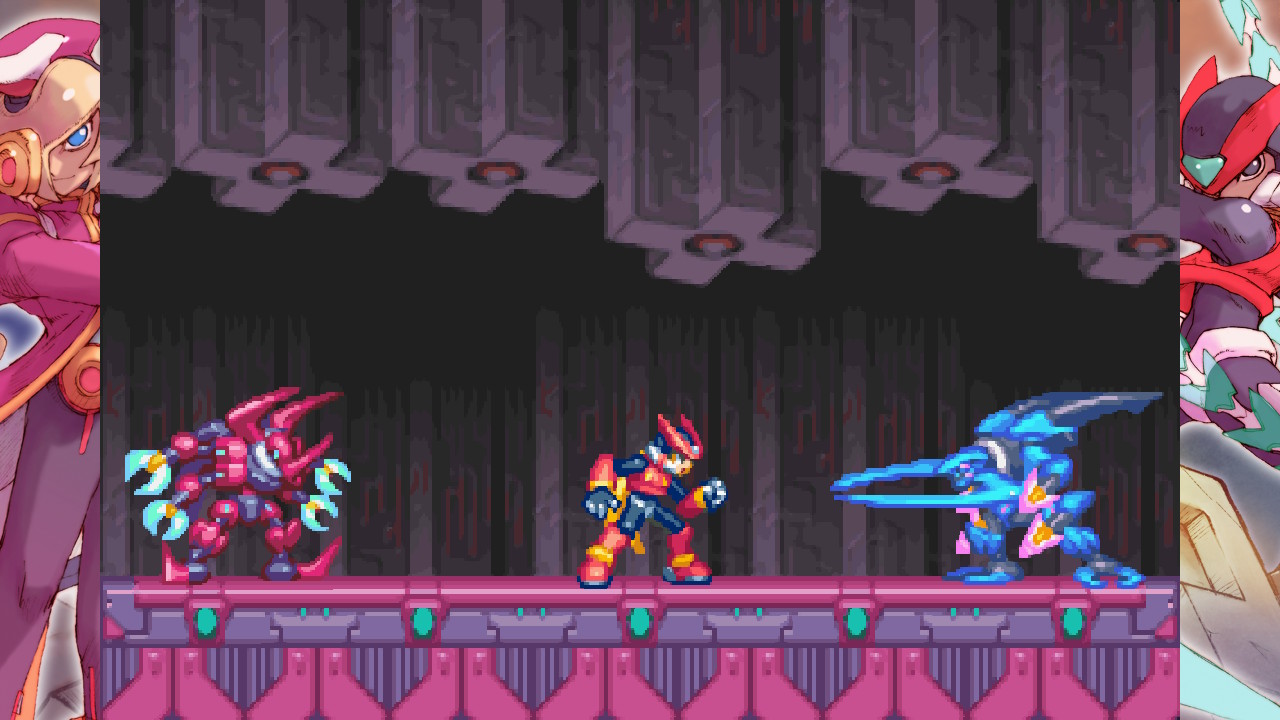 There was something that really “bugged” me about this fight.

Each game has remappable controls, though these are done in-game and there doesn’t seem to be a way to change the default for each game. Even worse, you can only map four buttons in the Zero series, meaning no matter what, you can only have two weapons equipped at a time and you’ll have to pause to switch between the other two. This is the same problem the first Legacy Collection had where you couldn’t map changing weapons to the shoulder buttons. 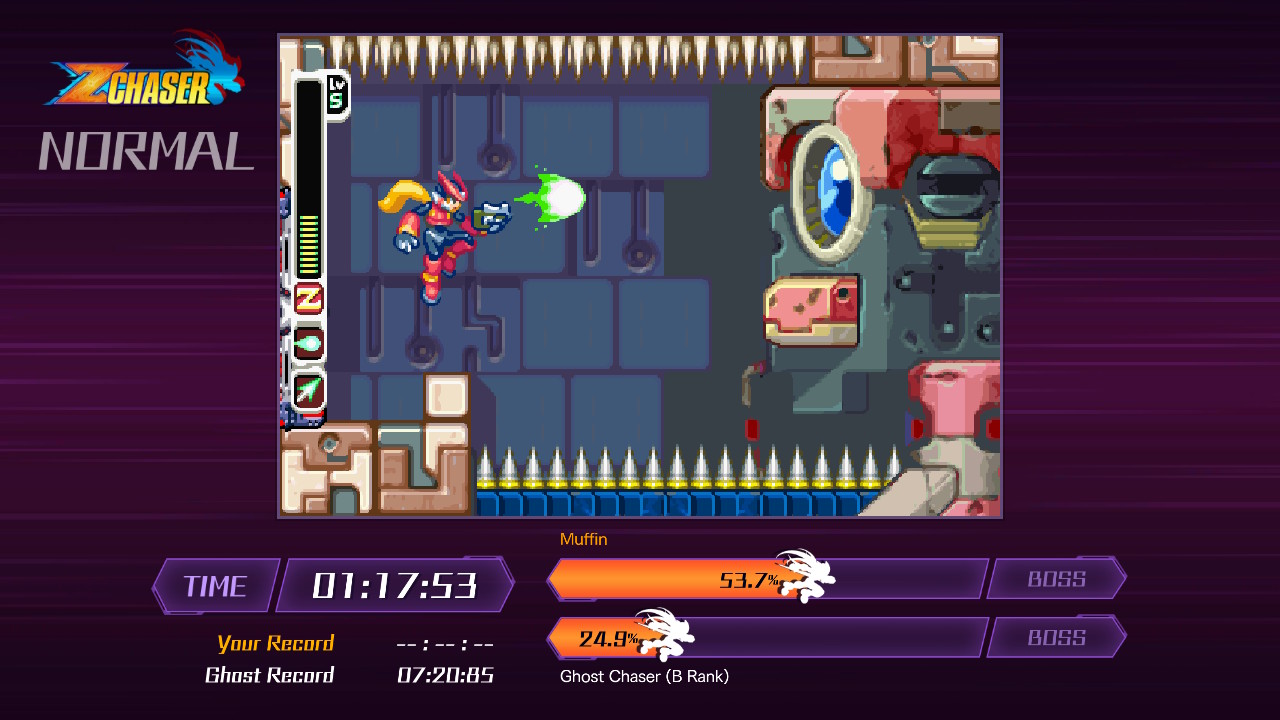 I’m really looking forward to obsessively trying to get the best times in Z Chaser.

This also means you’ll almost always be changing your controls in Z Chaser if you don’t play with the default setup.
I’ve mentioned it a few times, but what exactly is Z Chaser? While the Mega Man Legacy Collections had challenges and the Mega Man X Legacy Collections had X Challenge mode which pit you against two bosses simultaneously, Mega Man Zero/ZX Legacy Collection has the best challenge mode, Z Chaser. The Zero and ZX games are fluid and quick, and the collection takes advantage of this by giving players a mode to race against the clock and other players’ ghost data. 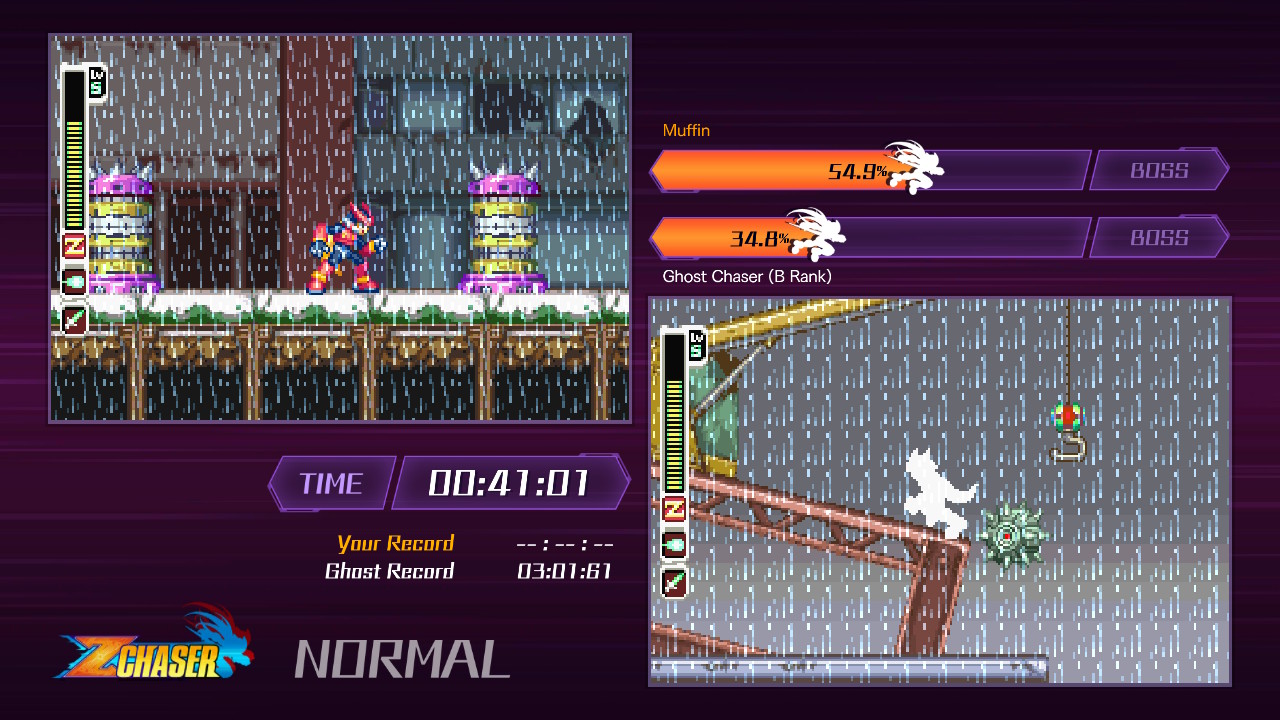 I’m racing against a random ghost from online that got a B rank. This let me go in with some minor bit of confidence.

Each game has two levels, and players can choose to race against their own ghosts, a ghost of various rankings, or the world record holder. You also play this with more health than usual, so you don’t have to be as cautious when running and slicing your way through each stage. Honestly, I wish there were more stages to race through because this mode is a great way to experience the game and adds longevity by forcing players to learn the optimal route. You can also race against someone else on the same console at the same time. It’s very reminiscent of the racing modes from the original Sonic the Hedgehog games.

Mega Man Zero/ZX Legacy Collection is easily the best Legacy Collection to date while including the entire Zero and ZX series. While the Zero games may be a bit unfair due to the zoomed-in GBA view and unforgiving lives system, the new save-assist feature gives players the ability to play through these games at their own pace without feeling like they’re given too much power. Z-Chaser is lastly a good bonus game, even if it is lacking in the level department.

Sean Anthony likes to combine two of his passions: gaming and writing. Gaming has been a huge part of his life ever since he played his first game as a child, Kirby's Adventure. He aspires to have his name attached to an article that makes the whole world go, "Huh, that's neat, I guess."
Related Articles: Mega Man Zero/ZX Legacy Collection
Share
Tweet
Share
Submit