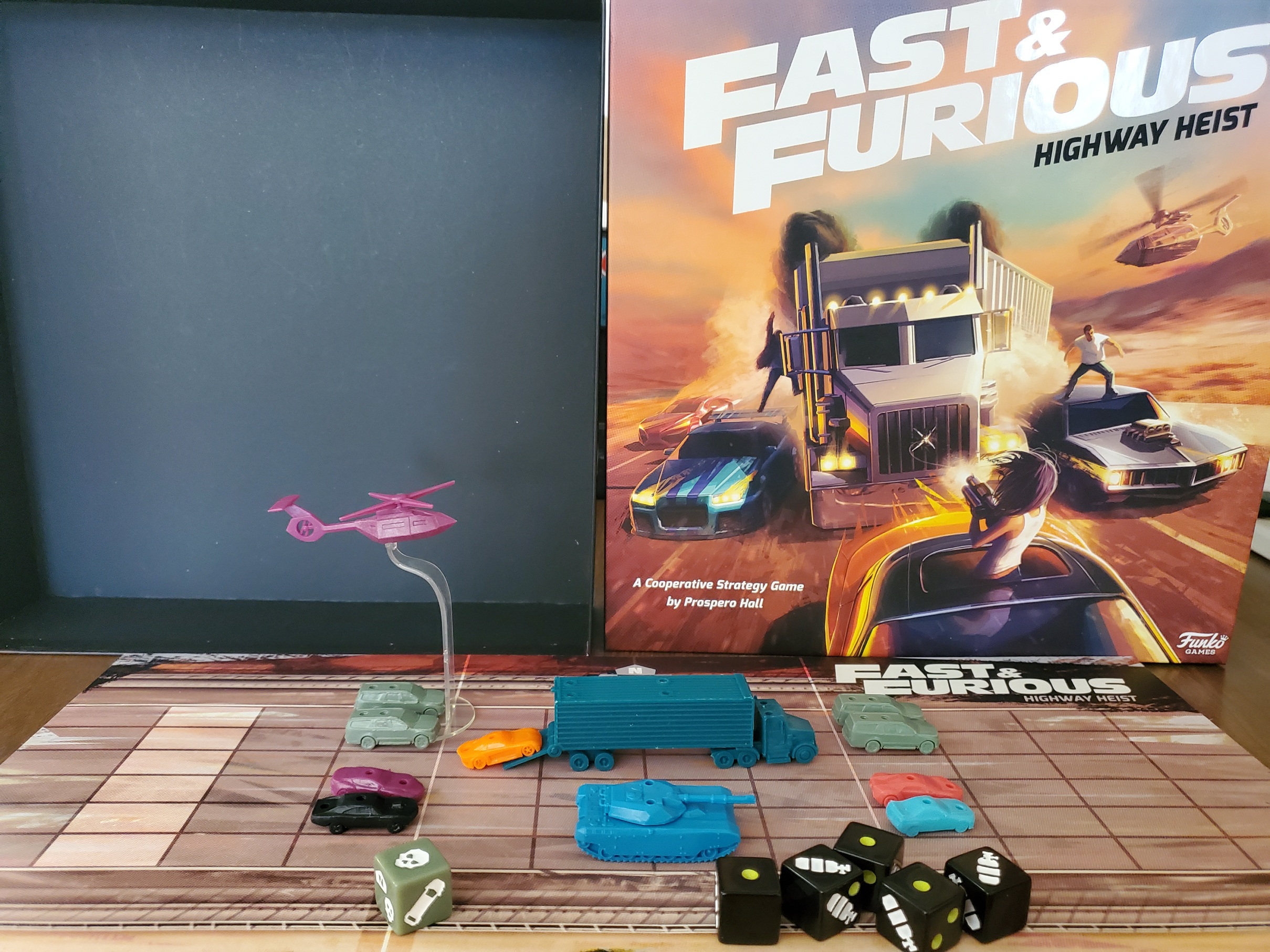 As a scenario-based, co-op, medium-weight, licensed, “Ameritrash” game; Fast & Furious: Highway Heist occupies a weird place in the contemporary board game scene. While I enjoyed my time with the game, I don’t know that I have any interest in revisiting it in the future, and I struggle to think of who I could play this with that would be into the experience enough to want to play it over and over again. No one I played with had a bad time by any stretch, but none of them walked away saying this was a great game that they wanted to immediately play again. 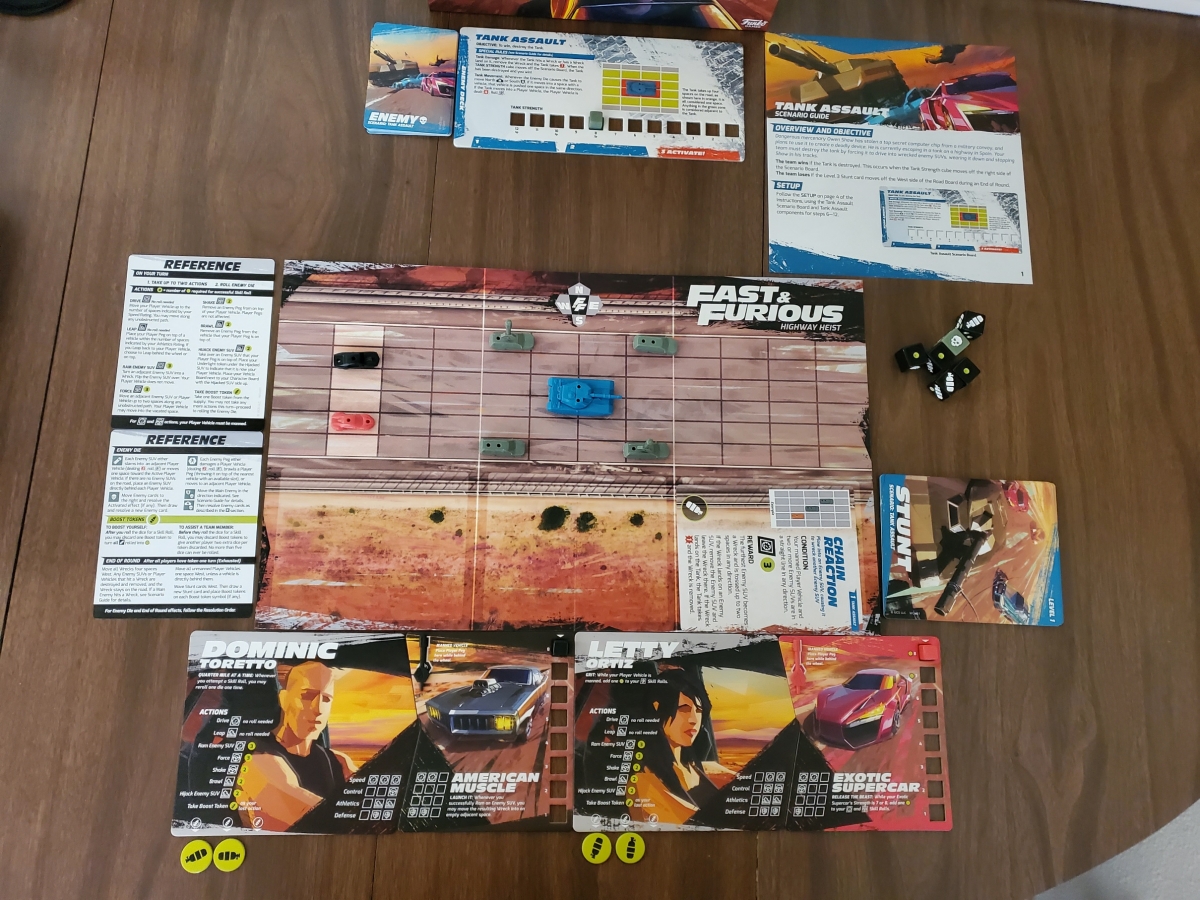 Fast & Furious: Highway Heist sees 2-4 players assuming the roles of 2-4 of the series’s protagonists tackling 1 of 3 included scenarios, which are based on iconic moments from the franchise. Each scenario has its own unique setup, special rules, enemy action and player stunt decks, and win/loss conditions detailed across both a small (2-6 page) scenario guide and a dedicated scenario board. In general, a round will involve each player taking 1 turn each. On their turn, each player will take two (of 8+ available) actions, and then roll the enemy die to determine what the enemies do. 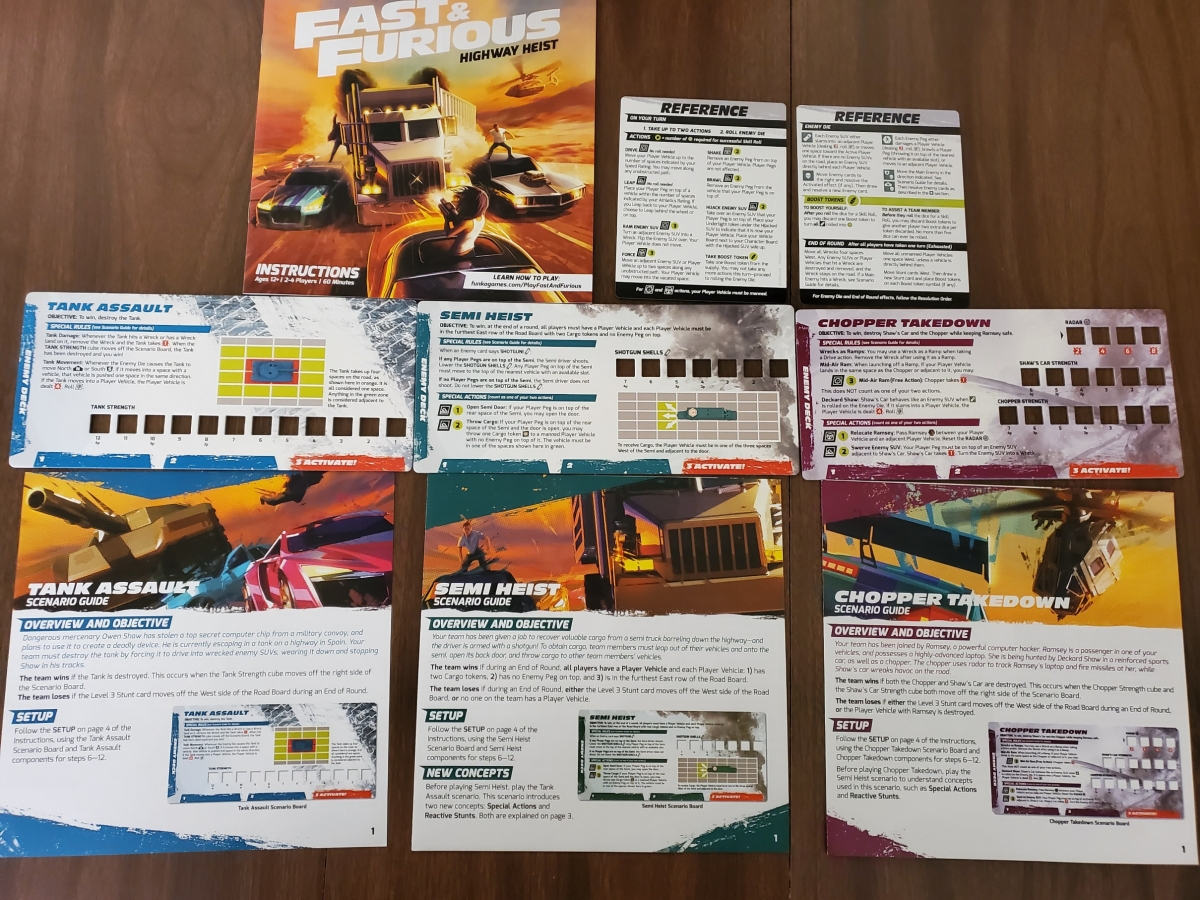 Many actions require rolling a number of dice equal to the total relevant skill values of the driver + car they are driving to accumulate a number of green pips. A Boost token can be spent before other players roll to give them 2 additional dice to roll (up to 5 total dice) or spent by the rolling player to count any NOS symbols as pips instead. Players start with 2 Boost tokens and (aside from Roman, who can have 5) can have 3 Boost tokens total. Boost tokens can be gained either by sacrificing actions or by performing stunts. 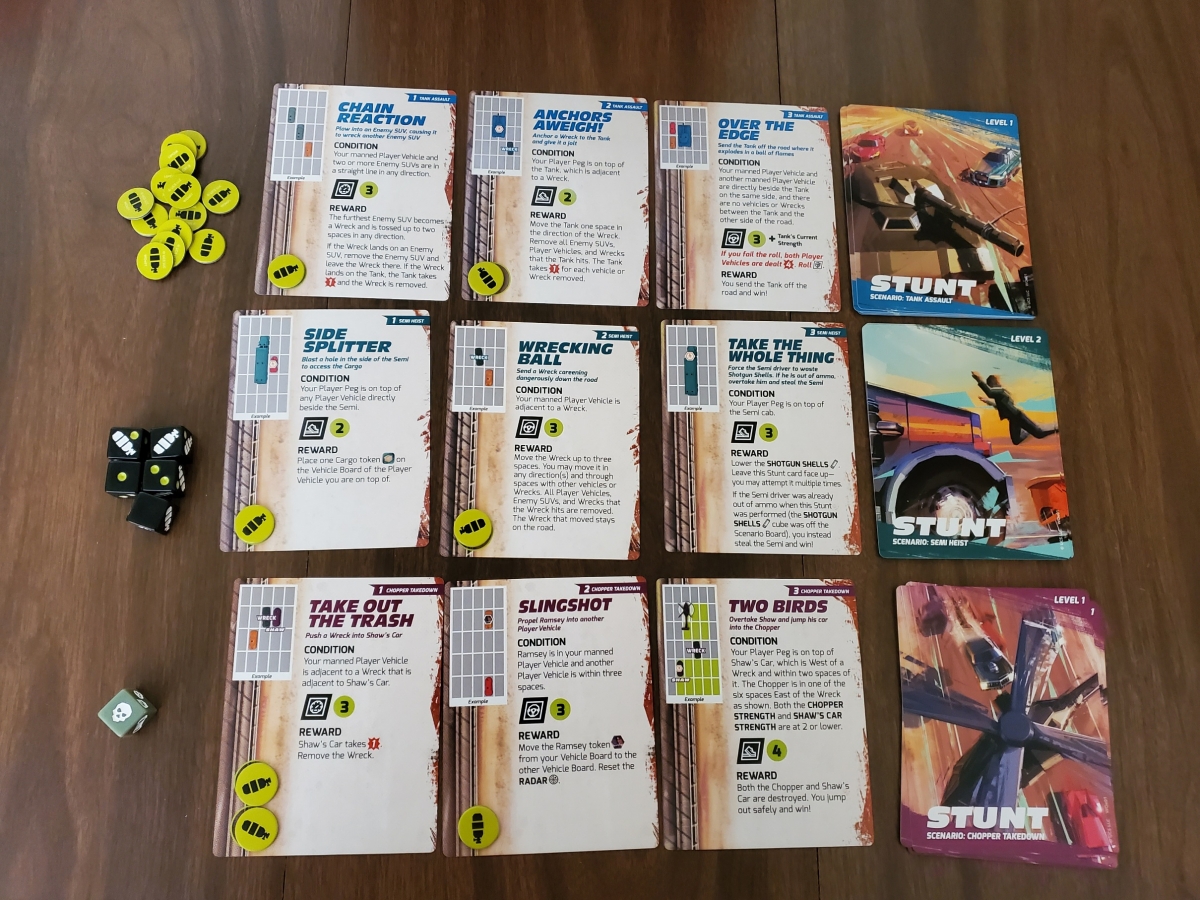 Stunts are cards that represent, well, stunts from the films. Performing them tends to help players accomplish scenario objectives and acquire Boost tokens. Often, stunts require specific board positioning and a successful skill roll perform, and can normally only be successfully performed once before the card is exhausted and unusable and.

After all players have taken their turns, the round ends, wrecked vehicles are moved 4 spaces to the left (potentially destroying vehicles they run into), a new stunt is drawn, and all existing stunts slide to the left, with a maximum of three stunts on the board at any given time. The game ends when either the win or loss conditions outlined in the scenario guide are met.

The game has 6 playable characters (Dominic, Brian, Han, Letty, Roman, and Tej) and 4 starting player vehicles. Both player characters and vehicles have their own unique stats and abilities – though not all abilities are equally useful. Notably, Brian’s ability to take a free Leap action is largely worthless in the Tank scenario, where there is no real need to be outside of a vehicle unless your vehicle is damaged or destroyed and you need to take over an enemy vehicle. Meanwhile, Tej’s 1 Athletics skill makes him a bit of a liability in the Semi Heist and Chopper Takedown scenarios, where at least some of the players acting outside of their vehicle is mandatory.

Somewhat similarly, the most common difficulty to roll against is 3, so, while there are a large number of theoretically possible driver and car combinations, between picking good characters for the scenario and picking driver-car combinations that will give everyone 3+ in their Speed and Control skills, there are not always a lot of practical combination options to choose from (particularly at 4 players).

Speaking of scenarios, not all scenarios are built equally and the order of them does not make sense thematically. The game states that you should play the scenarios in the following order: Tank Assault -> Semi Heist -> Chopper Takedown. Mechanically, this is great. Tank Assault is the most mechanically simple scenario: you are basically just trying to wreck enemy SUVs so that the tank will run into them and get damaged. Very simple. The Semi Heist then ups the complexity a bit, where you have to get someone on top of the semi and toss cargo out of the back of the truck and to other players in cars that need to be positioned behind the semi, while dealing with enemies trying to stop them (both in SUVs and on top of vehicles). The Chopper Takedown is the most mechanically complex: you need to destroy Shaw’s car (by guiding enemy SUVs to crash into it) and destroy the chopper (by wrecking enemy SUVs and using them as ramps to hurl your cars into the chopper), all while avoiding the chopper’s missiles and keeping a VIP alive (often by tossing her between player cars).

Again, mechanically, it works, with each scenario being more complex than the last. However, it doesn’t really work thematically (or chronologically within the series). Stealing cargo from a semi is a bit of a letdown after having just gone face to face with a tank. The confrontation with the tank, which is from the sixth film, also happens after the semi-heist, which happens in the first film.

There are some issues with a couple of the scenarios as well. Most notably in the Tank Assault scenario, it is entirely possible to run out of enemy SUVs to try and wreck into the tank, meaning you can’t damage it and have to twiddle your thumbs for a while. Sure, there are methods of spawning more enemy SUVs, but they are not reliable. Rolling the SUV icon (which is on two faces of the enemy die) when no enemy SUVs are in play will spawn SUVs. Additionally, some enemy cards will spawn enemy SUVs. However, those are not guaranteed spawns and it is possible, as was the case in one game I played, to go two full rounds (eight player turns) without any enemy SUVs on the board. Not fun. 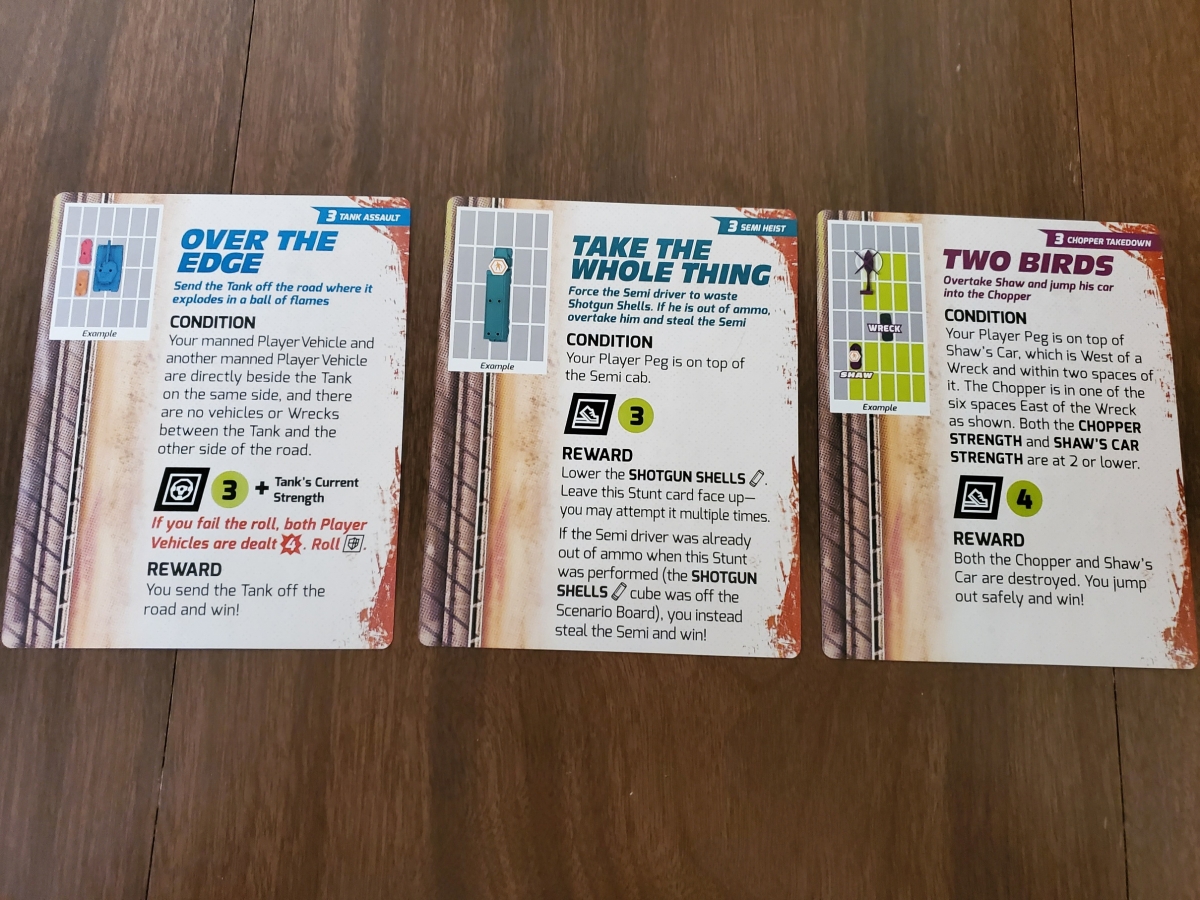 The final stunts in each scenario are a mixed bag too. They seem to be last ditch methods to try and win the scenario, but they aren’t great. The final stunt of Tank Assault requires a skill check to beat the current strength of the tank. However, if you are doing well enough against the tank to reasonably beat the skill check, you are probably able to beat the tank without it; and, if you were really struggling with the tank, your chance of passing the skill check is likely going to be low to impossible. While the final stunt of the Semi Heist was often a bit of a godsend in terms of winning the scenario when I played it, it also kinda made the whole rest of the scenario (trying to accumulate packages) feel kinda moot and pointless. (The final stunt is to take down the driver if he’s run out of shotgun ammo and take control of the semi directly, stealing all the cargo.) The final stunt of the Chopper Takedown is a bit problematic too. While the stunt will allow you to destroy both Shaw’s car and the Chopper, it requires both to be alive and in very weak condition. If you had focused on getting rid of one threat and then the other so that you only have one of the two threats out when this stunt pops, the final stunt is useless.

Also, let me give a shout out for the production values. This game is really nice looking, particularly for a mass market game. The art, the minis – even the font – are all great. Just look at the minis below – the semi door opens and closes, and you can even fit the player cars inside it. 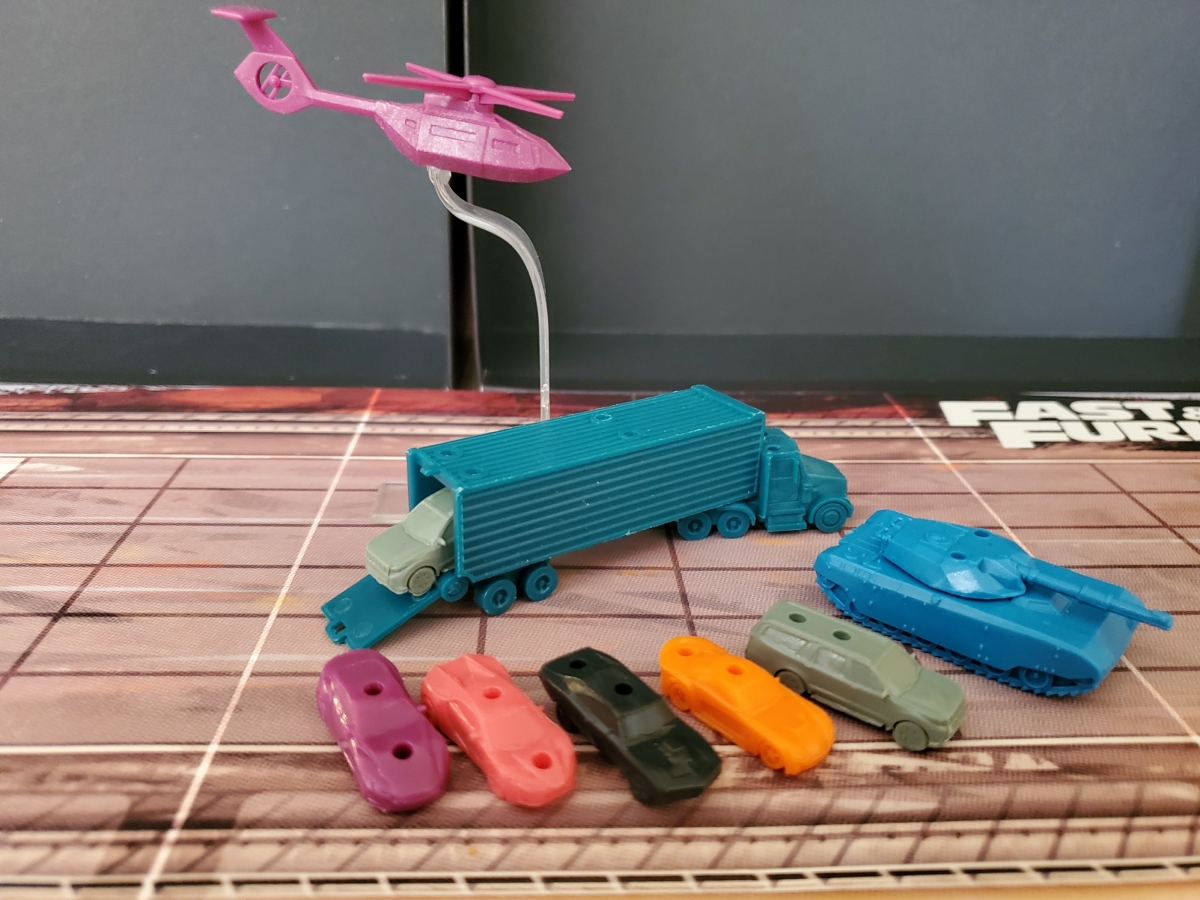 As a scenario-based, co-op, medium-weight, licensed, “Ameritrash” game; Fast & Furious: Highway Heist occupies a weird place in the contemporary board game scene. While I enjoyed my time with the game, I don’t know that I have any interest in revisiting it in the future, and I struggle to think of who I could play this with that would be into the experience enough to want to play it over and over again. No one I played with had a bad time by any stretch, but none of them walked away saying this was a great game that they wanted to immediately play again.

Dick Marshall’s love affair with gaming started when he was young, and never stopped. Some of Dick’s earliest memories involve playing chess with his dad and playing Missile Command on the Atari 2600. In a former life, Dick worked as a System Administrator, Software Developer, and Manager - among other things.
Related Articles: Fast & Furious: Highway Heist, Tabletop
Share
Tweet
Share
Submit