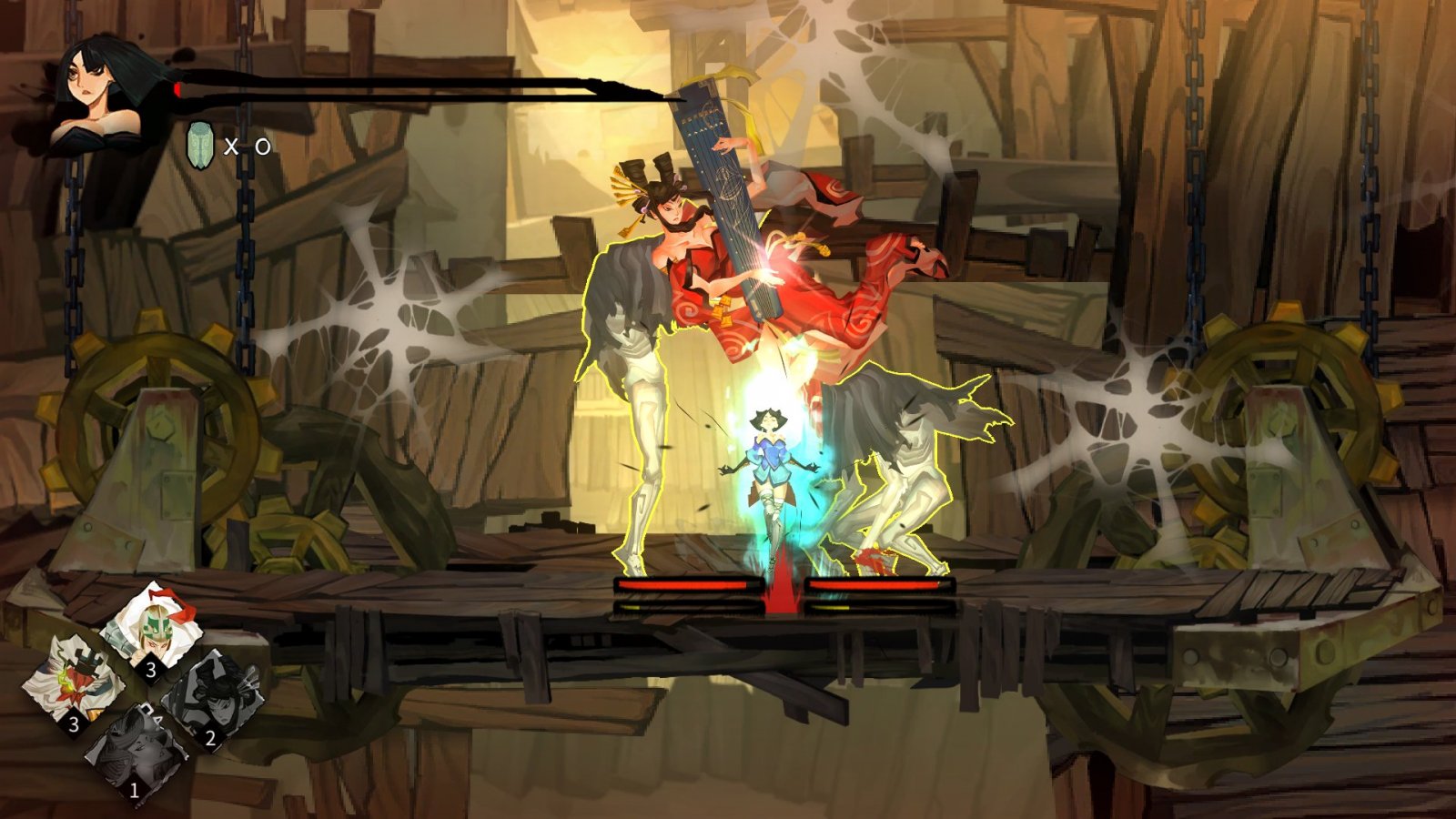 At first glance, you could mistake Bladed Fury for Vanillaware’s classic Muramasa: The Demon Blade. It’s clear that NEXT Studios took a lot of inspiration from that title for its new game’s looks and gameplay, though it scaled back in both departments. Though Bladed Fury doesn’t quite measure up to the best of the hack and slash genre, it’s interesting enough to stand on its own for its roughly four-hour story.

In Bladed Fury, you take on the role of Princess Ji, who is exiled from her home after being blamed for her father’s death by a conspiring rival to the throne. The story is loosely based on the Warring States period in China (loosely enough to also include demons and mech suits), and serves as a gossamer-thin thread to hold the game together. Ji tracks down three witnesses to her father’s death, first in order to get some answers, but ultimately to clash swords with them. Though the story makes some clumsy gestures at philosophizing over how to be a good ruler, it’s certainly not what will keep you playing. Nonetheless, it’s nice to see a game based on the relatively unexplored setting of ancient China, however fictionalized it may be.

Fortunately, Bladed Fury’s combat is far more compelling than its story, despite not being terribly deep. You’ll face off against hordes of skeletons and other supernatural beasts using basic light and heavy weapons, parry attacks, and aerial moves. Though your options are streamlined, pulling off these attacks feels satisfying, and it’s simple to chain them together into room-clearing combos. Things get a little more complicated when you have to parry ranged attacks, dodge unblockable blows, and use specific moves to chip away enemy’s armor. Each time you defeat a boss, you’ll also be granted what the game calls a Soul Sliver, essentially a summon that can deal damage, slow enemies, or heal you. Deciding when to use these summons adds a nice layer of strategy to the game’s combat without complicating it much. The overall simplicity means that if you fail, it’s likely not because you got overwhelmed with options, but because you didn’t use your limited arsenal optimally.

Aside from gaining Soul Slivers, there’s not much to mix up Bladed Fury’s combat. There is an upgrade system where you use currency gained from defeating enemies to buy new powers, but the list of abilities is small and fairly bland. You can buy a parry attack (which I used constantly and probably should have been a default ability) and a charged heavy attack (which I never used because it took forever to execute), and most of the other upgrades just marginally improve an ability you already have. There’s really no way to customize a build, and I had every ability I wanted well before the game’s end. It’s a decent way to make sure your character is slowly gaining power throughout the game, since otherwise there are no stats to increase or upgraded weapons to find, but it’s not very exciting.

Where combat with standard enemies is mostly about juggling multiple small foes that are easy to dispatch but can gang up on you, Bladed Fury’s boss battles pit you in duels against resilient opponents with powerful attacks. The game’s bosses are clearly its high point, even though they rely a little too much on blink-and-you’re-dead attacks that can outright destroy you if you’re in the wrong place when they start. Despite that, each one is a challenging, inventive fight that brings unique mechanics to the table.

Between brawls, Bladed Fury is about as straightforward as games come: You walk from room to room dicing up enemies with your weapons and occasionally solve some very light puzzles. Bladed Fury doesn’t put much emphasis on exploration, unless you count a few instances where you choose in which order to complete your objectives (usually unlocking gates in some form or another). Likewise, its platforming mainly consists of leaping over spike pits and avoiding bursts of flame. Running through the game’s levels to find enough thingamajigs to open the next whatchamacallit bogs the pace down a bit, but these scavenger hunts are also generously sprinkled with combat to keep you engaged.

Whether you’re fighting ghostly generals or just making your way to the next gate, the game’s art is a consistent treat. Enemies range from flying decapitated heads to nearly screen-filling demons, and they’re all gorgeous and meticulously detailed. The game’s levels are similarly wonderful to look at, whether you’re exploring the underworld or just leaping between the roofs of wooden shacks. Unfortunately, one thing that Bladed Fury definitely borrowed too heavily from Vanillaware is its hypersexualization of women. Women in the game are often so lewdly presented — and sometimes stretching the bounds of anatomical possibility — that it borders on parody.

If you’re able to overlook its crass portrayal of women and barely-there story (two skills that still get exercised with tragic frequency playing video games), Bladed Fury is a perfectly enjoyable, if not very memorable, game. Its combat is challenging enough to keep you on your toes, while not being so complicated as to turn off casual players. And despite some questionable costume choices, its art direction is almost enough to make it worth recommending on its own.

Bladed Fury doesn’t break any new ground, but it’s got its 2D hack and slash fundamentals down to a science. Its beautiful hand-drawn art style and great enemy designs bring its mythological rendition of ancient China to life, even when its story fails to.

A committed indoor kid, Bryan moved from Pittsburgh to Los Angeles for a prettier landscape to ignore. They can be lured outside with promises of taco trucks and film festivals, and enjoy trawling through used book stores for works on the occult. Bryan has been gaming since the SNES era and is a sucker for good pixel art.
Related Articles: Bladed Fury
Share
Tweet
Share
Submit