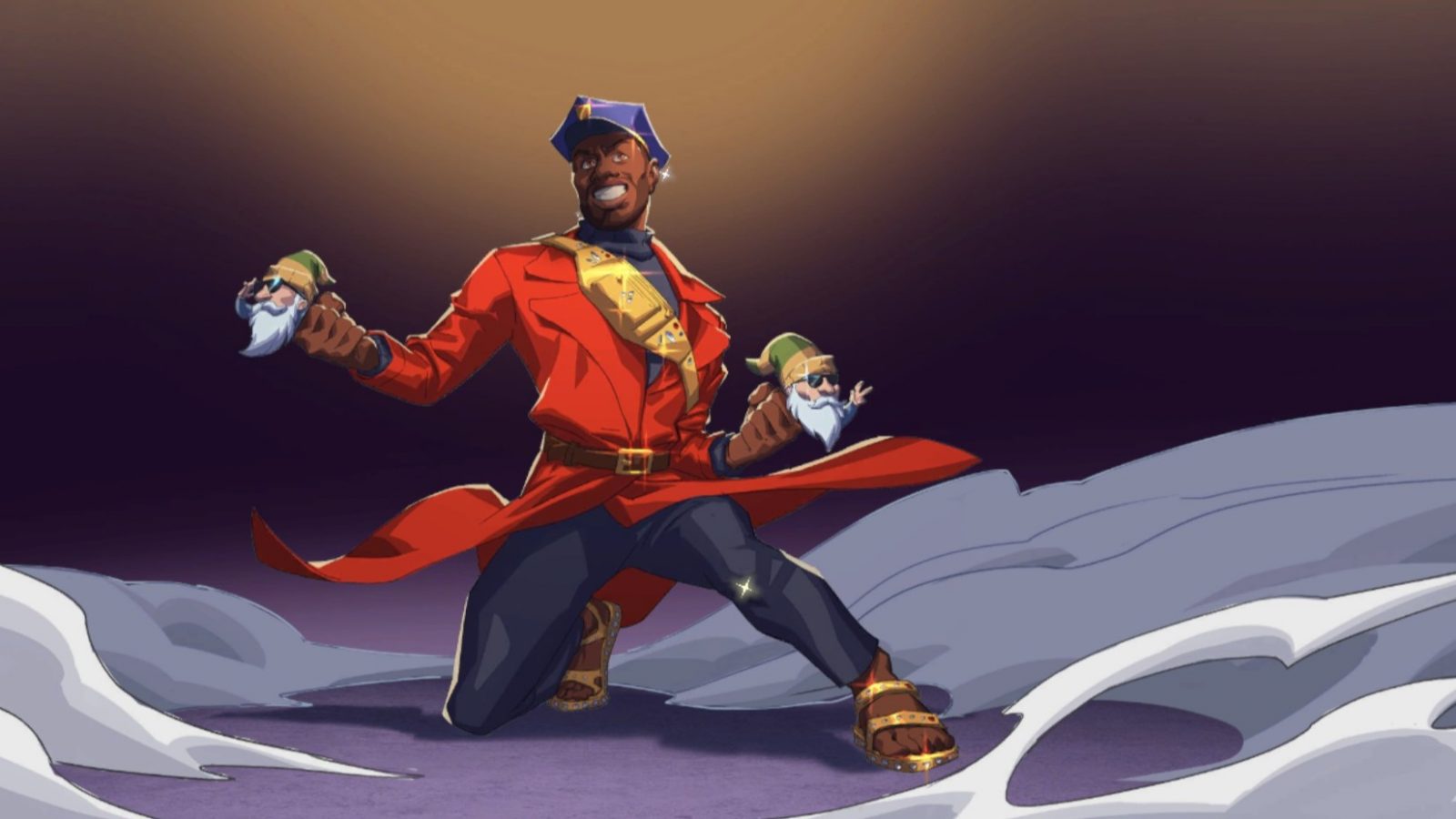 Trendcity is on the brink of disaster. Fashion crimes like ill fitting suits, flashy outfits, and the dreaded socks with sandals litter the streets. What starts as a normal patrol for Fashion Police Squad officers Des and Haley quickly turns into a conspiracy involving fashion designers and mysterious men in coats. Using his arsenal of fashionista weaponry, Des needs to solve this mystery before even the most fashionable citizens are infected.

Fashion Police Squad is a first person shooter, or more precisely a Doom clone as they were called when the genre was in its infancy. FPS makes no effort to hide its inspiration, even going so far as to include a Wolfenstein 3D parody for good measure. The game is level based, taking place in 3D environments with characters and enemies rendered in 2D sprites. Each enemy is guilty of a specific fashion crime, like drab outfits or saggy pants, and you need to fix them using the correct weapon. Drab colors need your paint shotgun, loose or tight clothes need to be shrunk with a water cannon or altered with some starch and sewing, and socks with sandals need to be removed with gnome grenades. New weapons are slowly introduced over the course of the game with a total of five by the final boss. You also have a melee option in the form of a belt whip, which can stun enemies, fix saggy pants, and even lets you swing from poles and chandeliers.

I didn’t go into FPS expecting a lot of platforming, but there is quite a lot and it actually feels really good. Your already fast movement just has a nice flow to it, and it gets even faster once you get the Wet Ones water gun which, in addition to putting out flaming outfits, lets you water the ground to move faster and jump farther. As you can probably tell, the game doesn’t take itself seriously in the slightest. All of your guns have jokey names like Tailormade, 2DYE-4 Elite, and the W.A.R.drobe Launcher. I do worry that some of the humor is too of its time, which may date the game if you’re not familiar with the current and past meme cycle. Still, the premise is ridiculous enough to be entertaining regardless of transient internet humor. There’s also a Jojo’s reference in the first five minutes, so that pleases me specifically.

While the level design, visuals, and platforming are consistently great, the combat can quickly become frustrating. Since your arsenal revolves around stopping specific fashion crimes, each gun can ONLY work on one or two enemy types. Try to hit an eager job seeker with a gnome and they won’t take any damage or be stunned. With so many enemy types, encounters in later levels had me methodically taking down enemies with my weapons in order while just tanking all the damage the ones I couldn’t deal with yet shot out. FPS is actually pretty difficult, but this particular aspect feels a bit artificial. It also prevents a lot of player agency and freedom, so I think it may have worked better if enemies at least took chip damage from all weapons, with a specific one being their weakness like MegaMan. 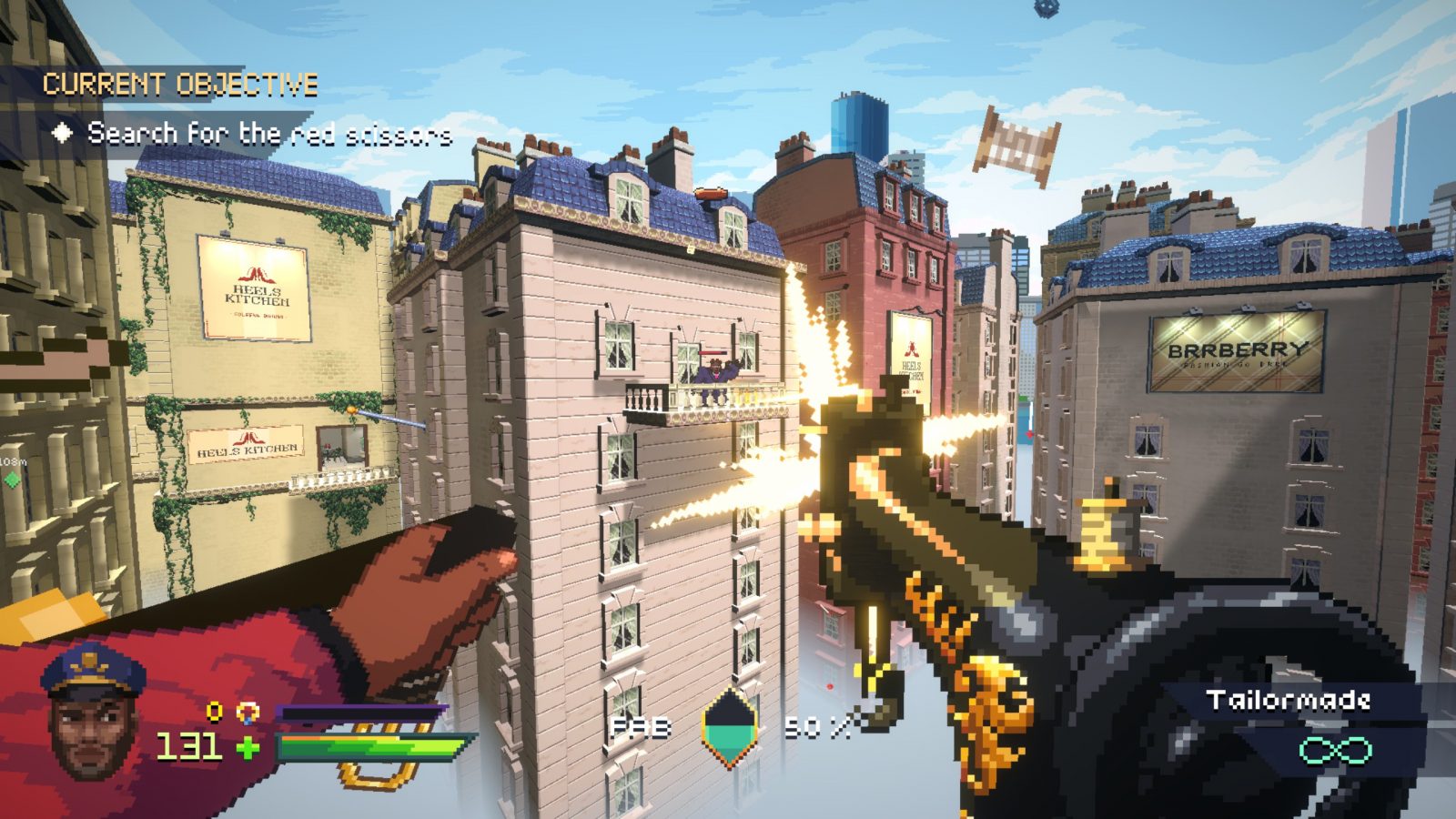 As you fight, your FAB meter at the bottom of the screen will fill up. At 100%, you can press Q to break out your glove and start slapping fools silly for a few seconds. The glove will solve all fashion crimes and teleports you to a target on click, making for a very fun screen clearer. For a lot of the game it does feel like levels are designed to have you use it in specific sections, but later on you get a bit more freedom.

Each level can range from 15 to 30 minutes in length, and at the end you are shown how many fashion crimes you solved, how much swag you collected (which serves as armor), and your secrets found out of the total along with your clear time. There’s no grading system, but it does encourage you to go back to find everything and get a better time. These stages are huge and hold a ton to find, I especially liked finding secrets as they’re just posters of Des in terrible outfits from pop culture. 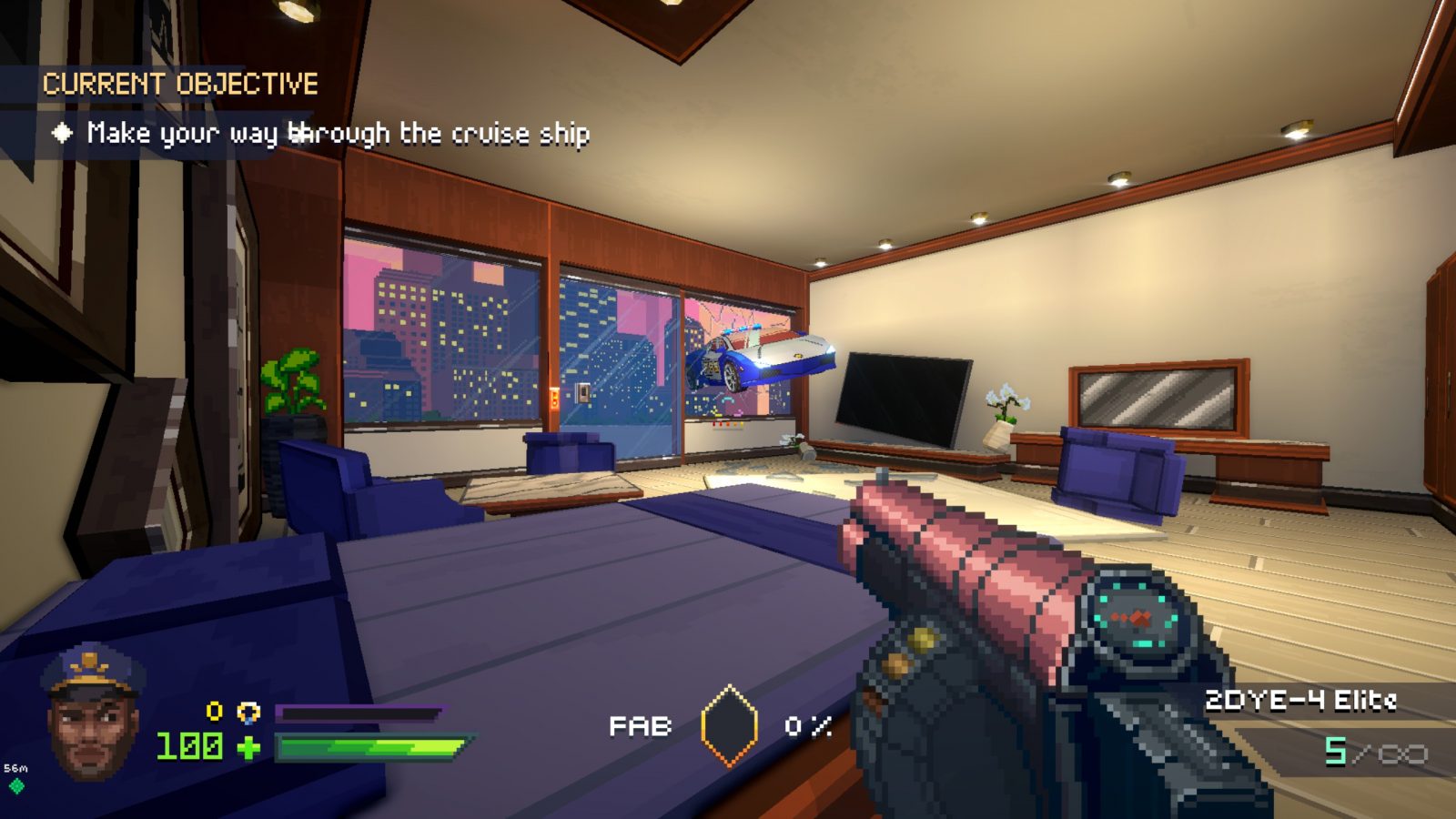 On a final note, the game looks great and has tons of nods to its inspirations. The pixel art is detailed and the 3D environments look crisp. FPS sounds fantastic too, with some bops that sound straight out of a Sound Blaster and super compressed voice acting. It’s very charming, and fits right alongside the mini homages to Boomer Shooters and other titles like Tony Hawk in short sections. The one that doesn’t fare as well is the sniper section, where you have to use specific bullets to solve fashion crimes before they enter a live streamed fashion show. It’s neat on the surface, but you have to be very careful where you shoot someone as a hair bullet won’t work if you hit the chest. The hitboxes are just a bit too stingy, which resulted in some unfairly low scores in the minigame.

Fashion Police Squad is an incredibly silly shooter hearkening back to the original DOOM in its design, while also taking into account some more modern sensibilities. While the combat does suffer from a lack of choice, the tight platforming and hilarious premise does make up for it somewhat.

David is the kind of person to wear his heart on his sleeve. He can find positives in anything, like this is a person who loved Star Fox Zero to death. You’ll see him playing all kinds of games: AAAs, Indies, game jam games, games of all genres, and writing about them! Here. On this website. When not writing or playing games, you can find David making music, games, or enjoying a good book. David’s favorite games include NieR: Automata, Mother 3, and Gravity Rush.
Related Articles: Fashion Police Squad, Indies
Share
Tweet
Share
Submit