Soccer, or football to anyone outside of the US, has gained a large fanbase in the video game world, especially because of games like FIFA. These games focus more on professional stats and realistic plays, but not everyone is into that style of game. Some people like to venture into worlds where they can perform cool moves and powers during gameplay, which I actually tend to prefer myself. Well, Street Power Soccer has taken a little from both of those camps and meshed them together to create a soccer game where you can toss some tricks and special moves into otherwise normal games. That’s not to say it’s a perfect mash-up, but it offers enough to keep you entertained for a while.

Street Power Soccer isn’t that different from your usual soccer game in terms of gameplay. You can jog, sprint, pass, lob pass, shoot, steal the ball, swap players, and so on. My favorite extra things you can do are perform tricks to try and avoid having the ball get stolen or guard to protect it more defensively rather than stylistically. It feels good running towards an opponent and pressing a button to do some fancy footwork that lets me slip the ball past my aggressive opponent. It doesn’t always stop them, but when it does, it makes me happy. 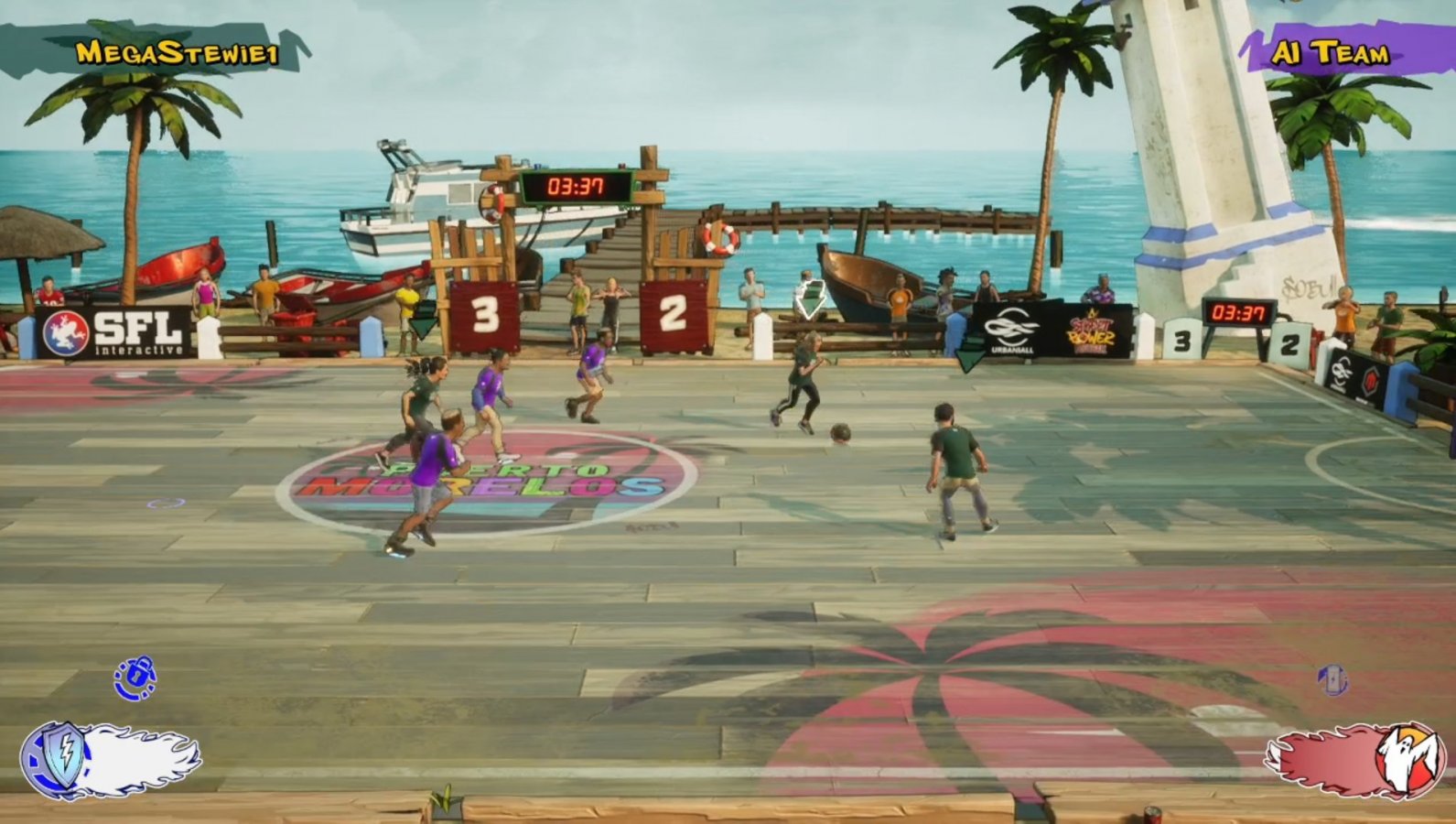 Street Power Soccer offers multiple game modes: Become King, Street Power, Trick Shot, Freestyle, Panna, and Multiplayer. Each mode is unique and has its own feel and goal (pun definitely intended). This is nice because it means that you aren’t given multiple modes that amount to you essentially doing the exact same thing. I made sure to play every mode, but unfortunately I wasn’t able to try out the multiplayer. During my time, whenever I searched for a game I was unable to find another player. This is most likely due to the game having just recently come out, so there may not be that many people with the game yet, or that many searching for online matches.

Become King is the closest thing you get to a story mode. Sean Garnier shows up green screened onto the world of Street Power Soccer and explains that you’re starting your journey to become the Street Power Soccer King. As neat as that sounds, him showing up and talking to you is the only “storyline” that you get. I know people don’t really play sports games for rich stories, but I feel it’s important to mention that this mode has a barebones “story.” You get taken to various locations around the world and are tasked with completing missions in order to prove how skilled you are. These missions are actually just playing the other game modes with challenges or goals added to them. For example, you may have to complete a trick shot level in Berlin with a score of 15,000 points or more. Another example could be winning a 3v3 Street Power match while making sure you’ve performed five or more tricks during the match. These little challenges aren’t bad by any means, but Become King is almost like a roulette wheel of the other modes with a little extra tacked on. 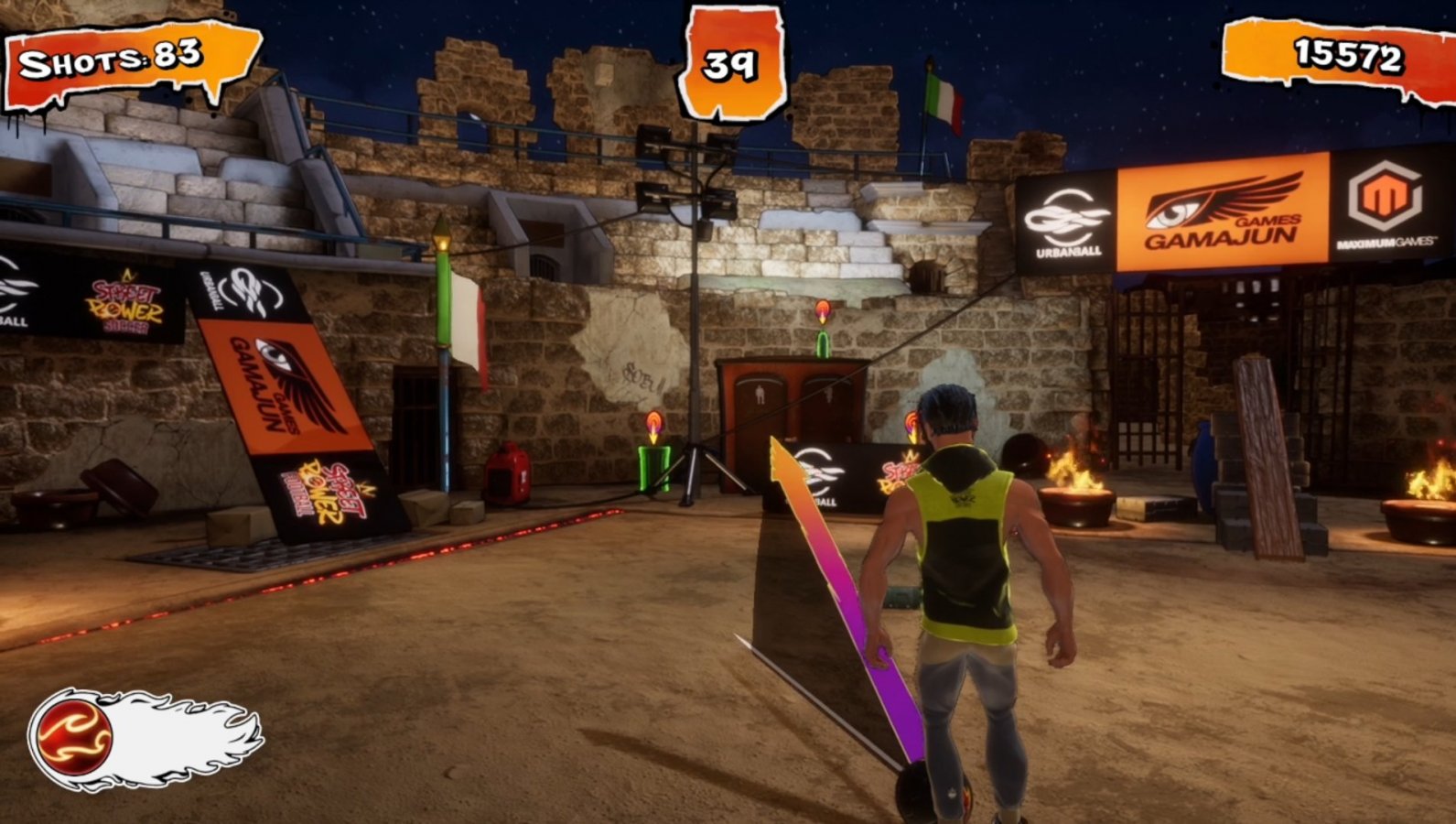 Street Power is your traditional soccer match where the first team to reach five points wins; you can choose 1v1, 2v2, or 3v3 matches. You can even choose your player or team of players from the selection of professional street soccer players. When choosing players, you’ll notice a symbol above their head that represents their special power. Some players have a ghost, others have a rocket, some have a zig-zag, etc. As you control the ball, take shots, and perform tricks, your special meter will fill up. Once filled, you can press L2 and triangle to activate your special move. Early on, I was looking forward to these abilities being a big part of the gameplay and them making things more exciting, but unfortunately it didn’t turn out that way. It could just be me, but I found that my matches typically ended before I got to use the ability more than once; honestly, there were a fair amount of times where I didn’t end up using them even once. It doesn’t drag the game down, but I was looking forward to the special moves being more impactful.

Trick Shot is one of the modes that feels more like a minigame than anything. You choose your location and are taken to a target practice course of sorts. You have an arrow that shows where you’re aiming and how high you’re aiming. You need to adjust these angles and also the power of your shots in order to nail your targets. You go through multiple “stages” where several targets are highlighted in the area ahead of you and you must kick a soccer ball at them. The targets include objects like water bottles, construction barrels, car doors, chairs, and more. Sometimes the targets are pots, trash cans, and similar objects that you must try to launch the ball into rather than knock them over. These latter targets were the most annoying ones for me, and easily took the most amount of time to successfully complete. Speaking of time, you have a time limit that you must complete all the stages in, and each stage completion rewards you with extra time. The idea of Trick Shot is nice, but it’s not a mode I particularly enjoyed playing. 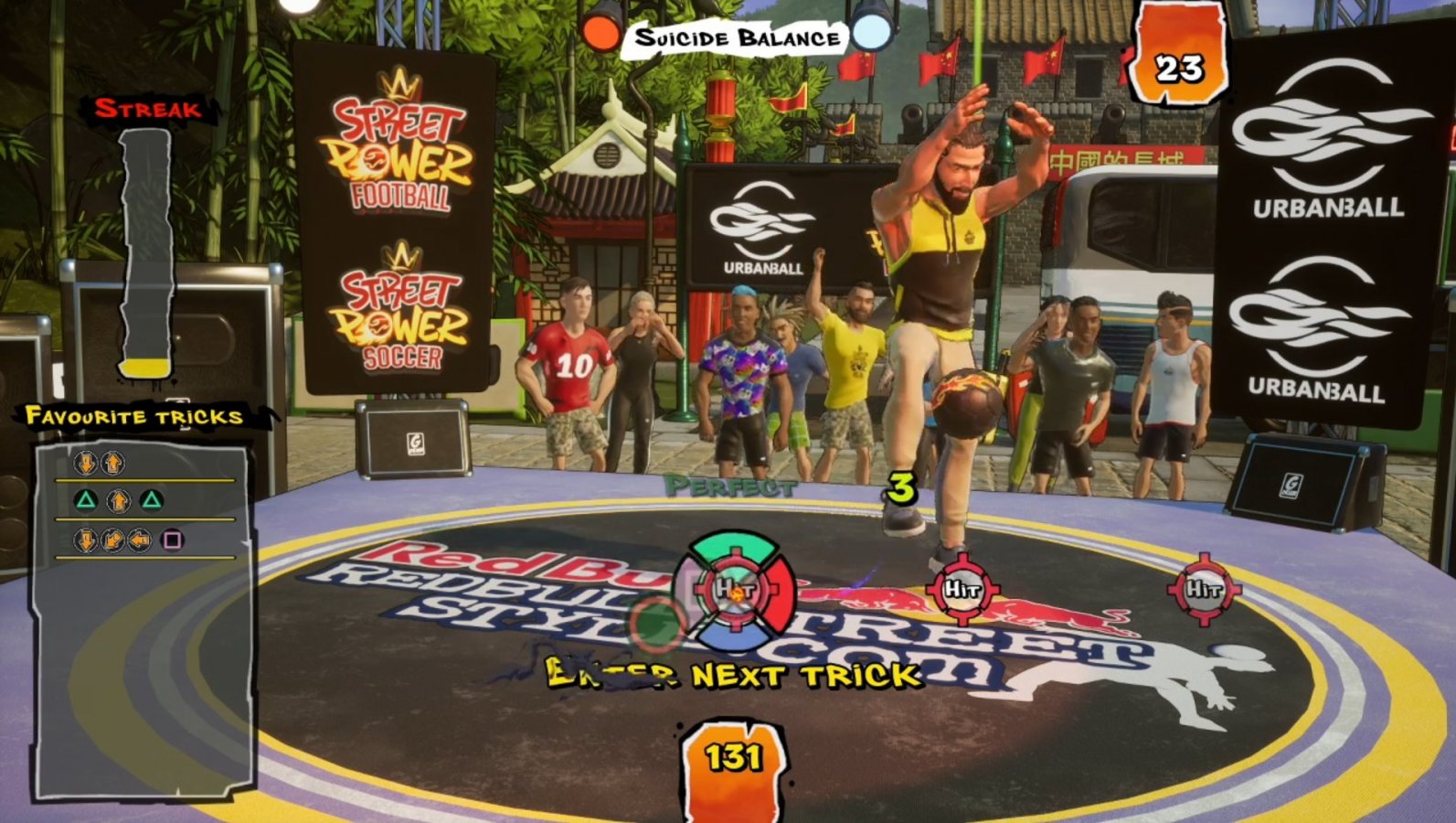 Freestyle is another mode that feels like a minigame, but this one focuses more on rhythm and button presses. You have a list of songs to choose from, ranging from easy to hard difficulties, and once you’ve chosen one, your goal is to rack up points by performing tricks while the song plays. Each trick has a specific button and analog stick combination that you must input in order to perform it. After performing certain tricks, you’ll trigger some targets that slide across the screen and pass over a central color button; you need to hit any button as the targets reach the button in order to earn more points. It’s similar to rhythm games, but it doesn’t feel the same as games like Guitar Hero, Muse Dash, or any other rhythm game that I’ve played. I like the intention, but it feels like it falls a bit short. You don’t start with many tricks, but as you play more, you’ll unlock more tricks and can show off a wider variety of fancy footwork. You can set up a list of favorite tricks on the side to help you out, which is appreciated. The best part of this mode for me was listening to the songs.

Lastly, Panna is a 1v1 game with a twist; you can score goals or you can perform nutmegs. Just like a normal match, the first player to five points wins, but you play in a smaller caged area. Goals earn you one point, while nutmegs earn you two. What’s a nutmeg you ask? A nutmeg is when you humiliate your opponent by kicking the ball through their legs, which is embarrassing in the world of street soccer. As you control the ball, your panna meter rapidly fills up; once filled, you can press triangle as you approach the opponent while you control the ball to initiate the panna attempt. Both players are given a series of three to four button combinations to quickly perform. Whoever successfully completes more combinations faster wins the battle. If you’re the attacker, you earn two points, but if you’re defending, then you shut the other player out. Victories on both sides feel great, and I feel confident whenever a panna battle starts. 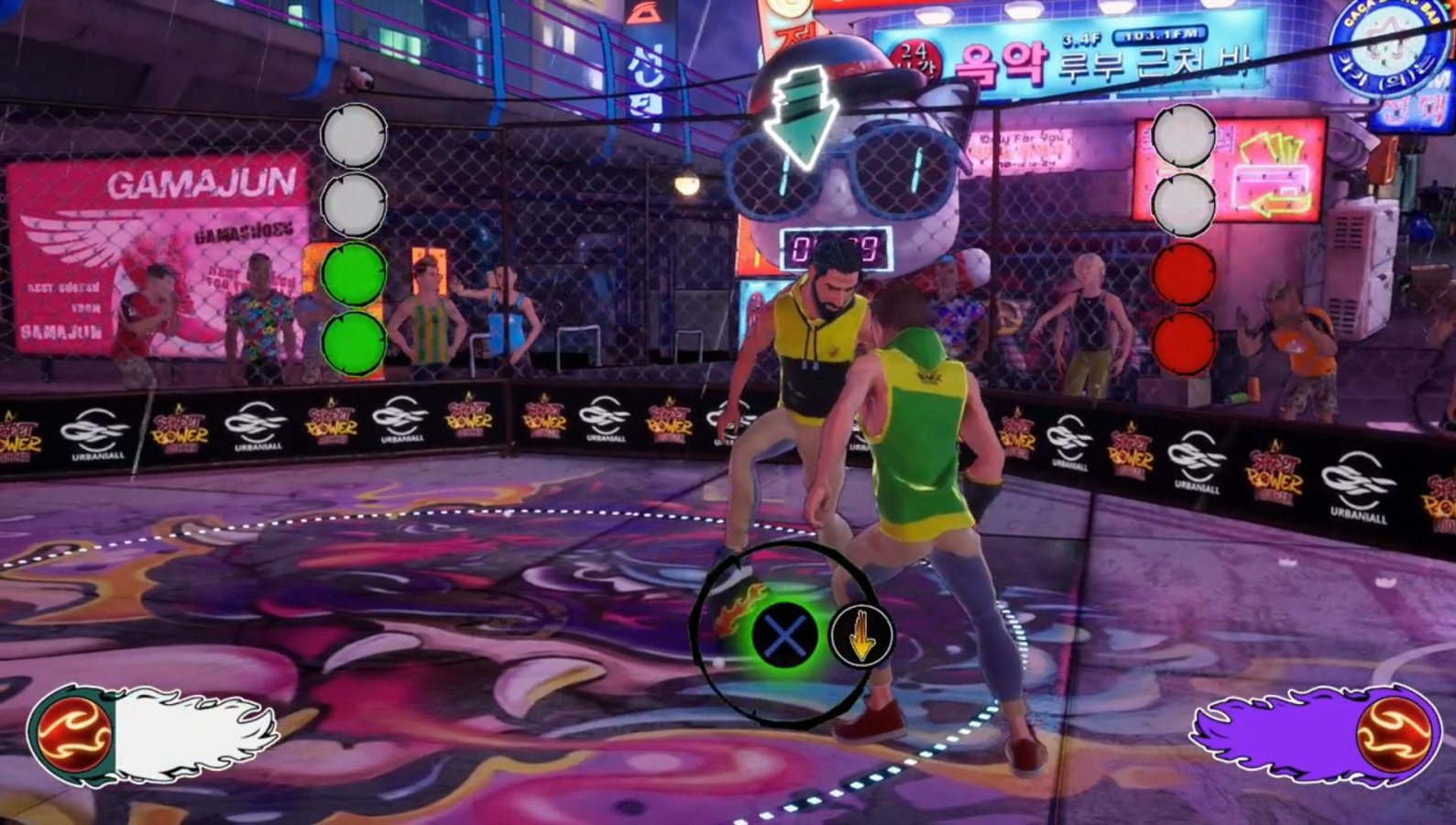 Street Power Soccer comes at you with multiple modes, a cartoon aesthetic, and a bumping soundtrack, but unfortunately it doesn’t deliver as much as I’d hoped. While the various modes have their own gimmicks and goals to them, some are clearly better than others. Trick Shot and Freestyle were neat ideas, but ultimately were my least favorite modes to play. I opted to focus more on Street Power and Panna instead, with some Become King sprinkled in. Gameplay felt fine, but swapping between players can get wonky when the game doesn’t swap you to the player closest to the ball and ends up forcing you to scramble and swap again. I’m a bit bummed because it had potential, but that $49.99 price tag doesn’t help it any. In the end, Street Power Soccer isn’t a bad game, but I wouldn’t say that it’s a great one either; it falls somewhere in the middle.

Street Power Soccer focuses more on fancy footwork and style rather than traditional gameplay, but doesn't live up to what it alluded to. It offers multiple modes, although some of them are lackluster compared to others. Matches feel very short and some gimmicks don't feel as prominent, but at least the soundtrack is really good.

Codi loves to play video games and watch movies. He will watch almost any kind of movie just to experience them. His ideas take inspiration from the shows and movies he watches, and games he plays. He also loves a good pun.
Related Articles: Street Power Soccer
Share
Tweet
Share
Submit