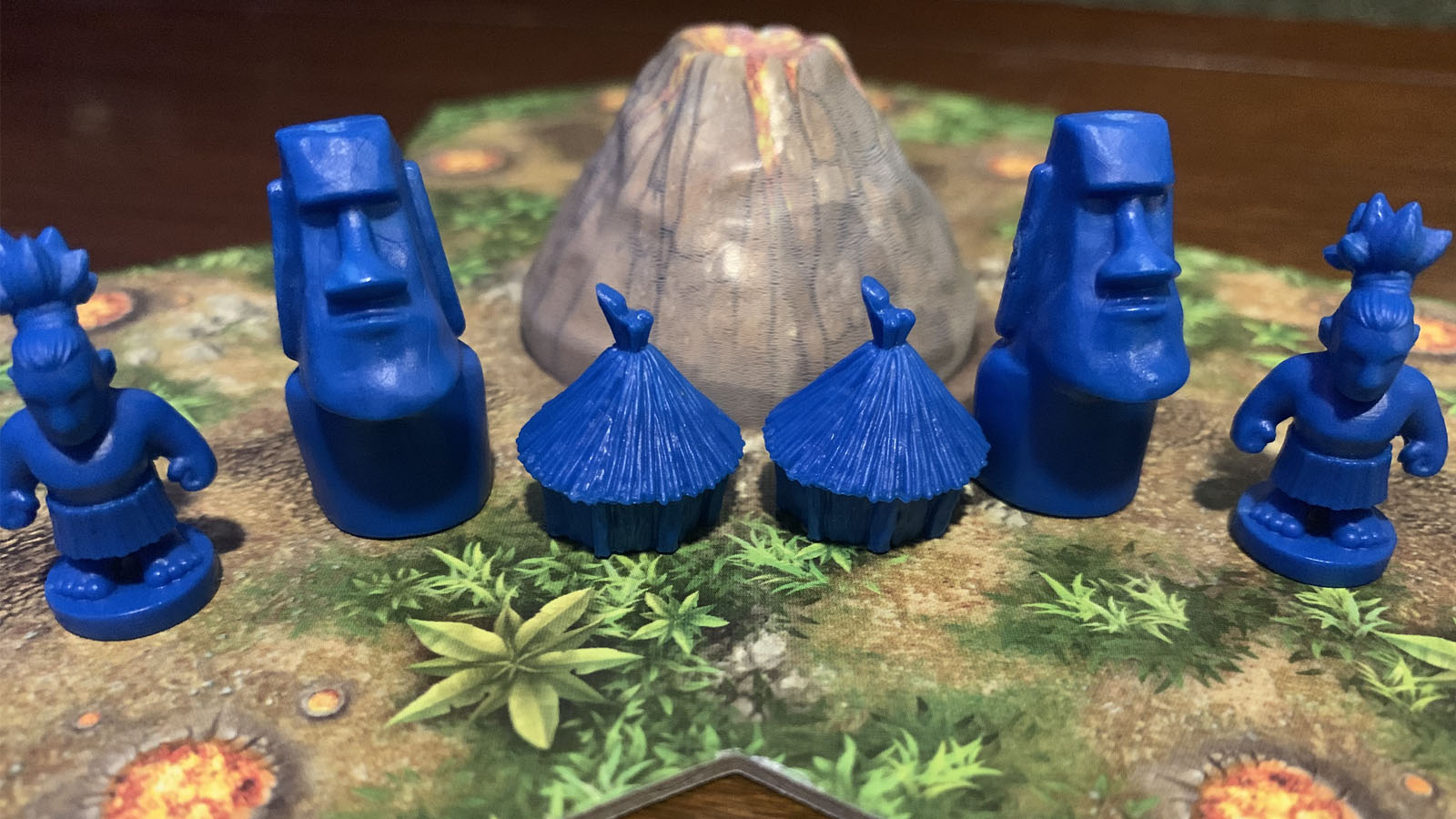 Volcanoes erupting, villages burning, and islands sinking. This is the scene you are trying to navigate in Volcanic Isle from Arcane Wonders.

Volcanic Isle is a game for 2-4 people where players will take on the role of a villager trying to expand and build Moai, villages, and repopulate to score the most points without having all of your hard work sink into the sea. Players will play a dangerous game with lava as they use this natural resource to build their civilization with the constant fear of another volcano eruption ruining their work. Moai are the large-headed statues that most people are familiar with from Easter Island.

To set the game up, there are multiple options. The rulebook gives multiple starting configurations that players can use or players can create a board on their own with a specific number of tiles. Regardless of what method is used, players will combine the tiles and put the land in place with the plastic volcanoes to add a three-dimensional aspect to the board. All the lava flows will be filled with lava, and then the game will begin. 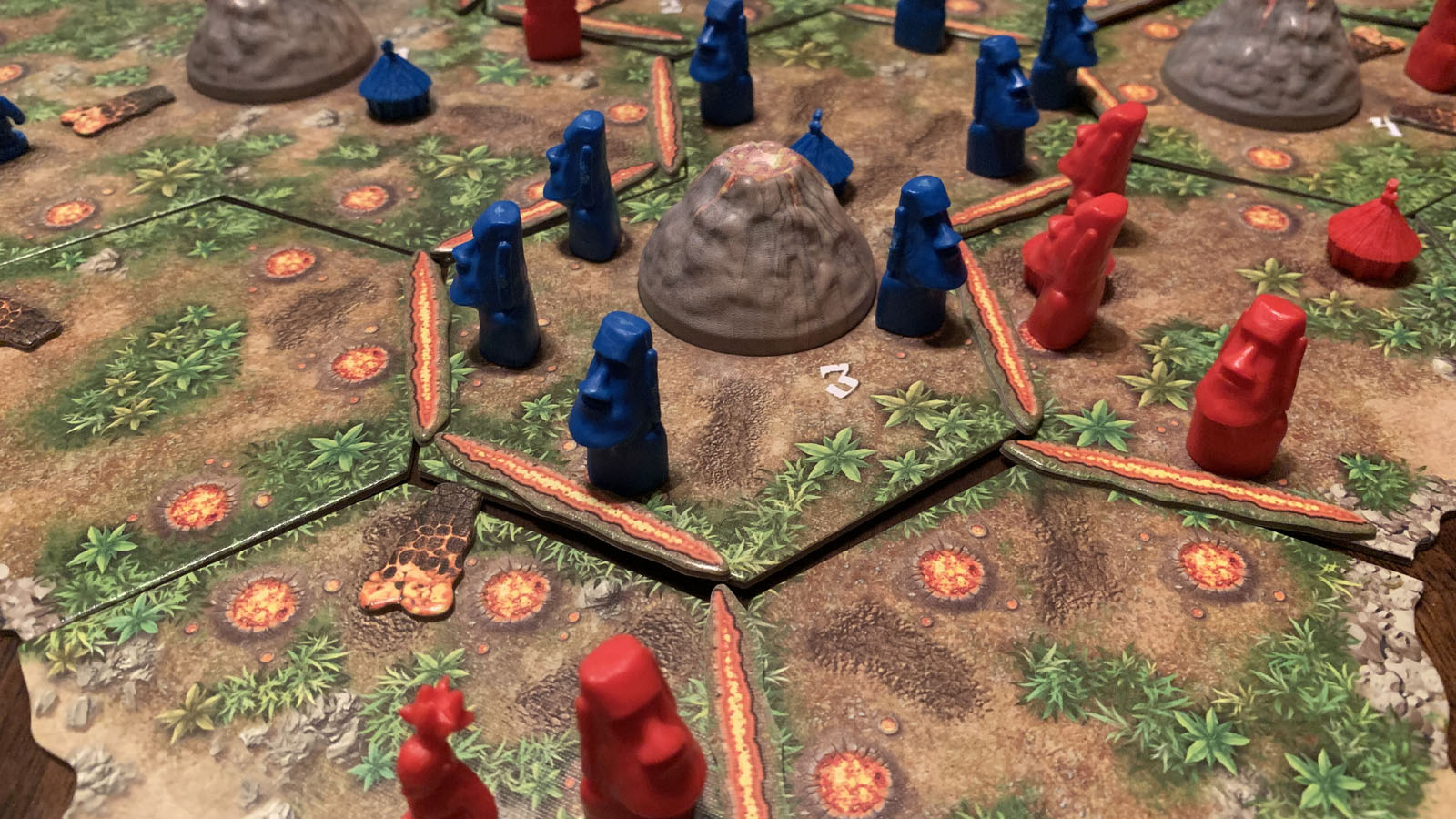 When building a village or a Moai, the player must make sure there is lava available on their tile that they can use to construct. Without lava on a tile, the players must move somewhere else or wait for a volcano to erupt to produce some more. When players raise a Moai, the action heats up. Thematically the player is placing the Moai on a geyser which causes a fissure. These fissures begin to break the island apart. If enough fissures occur that go from one edge of the board to another the island sinks into the water. 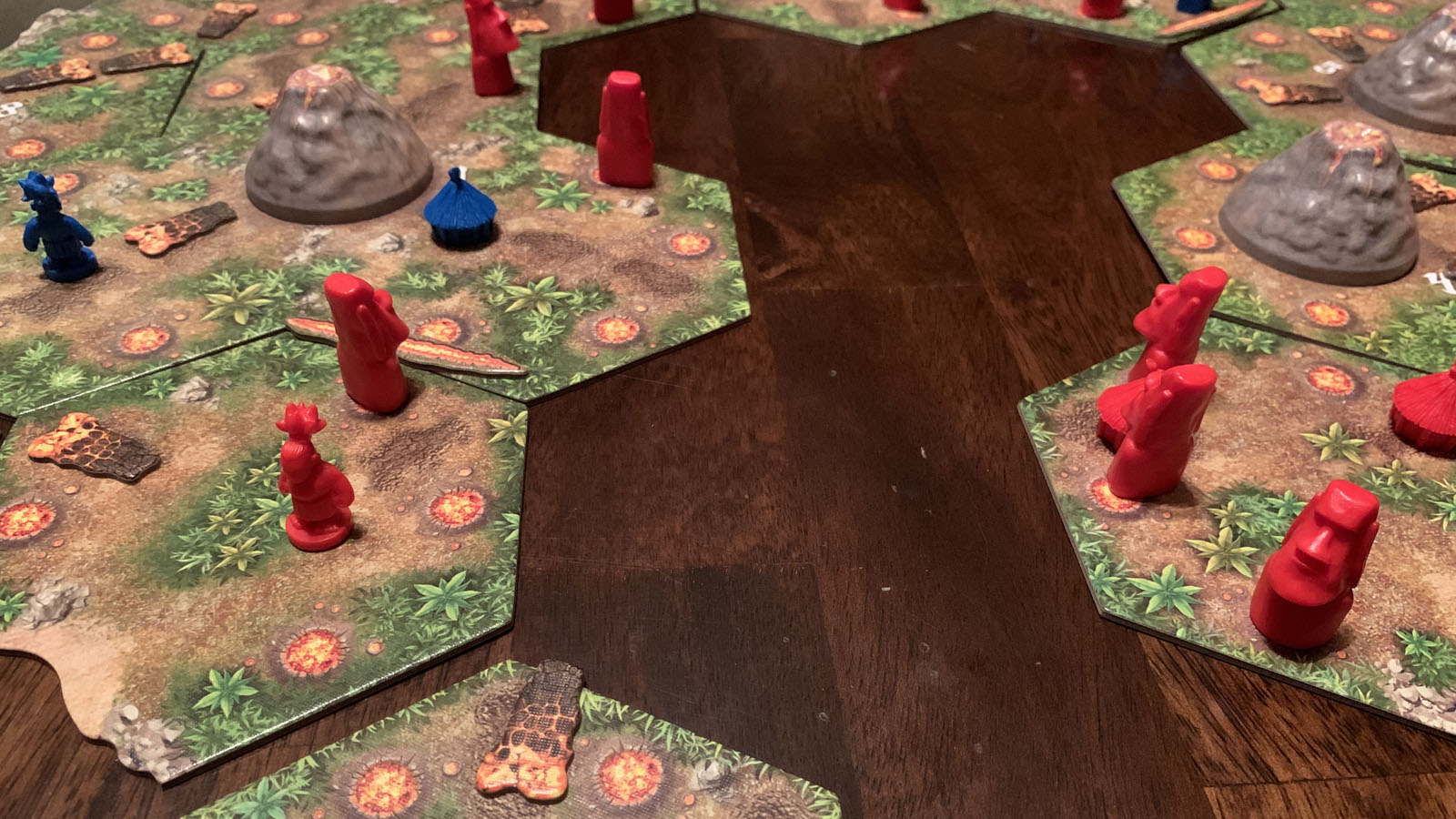 This means all the work you have done to raise Moai and build villages is now gone and while the first villager on these tiles can swim away for free, any additional ones are lost as well. If players spent action points before to get prayer tokens they can spend them now to save these things and minimize their losses. If players don’t cause a part of the island to sink it doesn’t mean that danger is averted. Instead, players will also roll the eruption die. If this die shows an eruption symbol then the players will draw one of the volcano tiles to see which volcano explodes. If there are any unraised Moai or villages on the empty lava flow locations, then these are destroyed.

When opening up the game I wasn’t sure what to expect but was pleasantly surprised with what I found. The components for the game were very nice, and it was fun to physically raise the Moai and to see them around the board. While the plastic volcanoes weren’t an essential feature, they really make the board pop and add to the aesthetics of the game. Together the components and aesthetics really help the theme come alive and the eruption and fissures constantly reshaping the island all feel thematic.

While the gameplay is relatively simple, it was also very fun and held different choices for players. I had to decide whether to try to spread out to limit the casualties if that part of the island sank or focus on one specific area to score the most points and risk losing them all.

This simplicity made it especially approachable for younger children while still leaving strategy for any adults or older kids playing. I played this primarily with my 11-year-old son and his primary strategy was to destroy my work. He got points along the way but really wanted to destroy everything I was doing. At the end of the game I ended up winning, but he wasn’t far behind and he had a lot of fun throughout. It wasn’t a hard or long game and it allowed a fun bit of competition throughout.

While my overall thoughts are positive, there are a few negatives. The rulebook is generally easy to read, but there are some confusing rules that I had to read multiple times to try to wrap my head around what they meant. One was when it was okay to add another villager to an area. Some examples would have been helpful in these areas. Secondly, while the plastic volcanoes are beautiful, the need to insert them from the bottom requires you to pick those pieces up and then the game board is raised slightly. While not a big issue, it felt a bit fiddly, and I wished they would have been placed from the top and fit nicely. Finally, while the pieces of the game were very nice, the storage for them was atrocious. The “insert” included was just a cardboard hole that didn’t fit all the pieces and required you lift it up to fit everything else. There are very few bags, so the majority of the components scatter if you don’t use your own storage solution. I wish some additional bags or a better insert would have been included to help make this game even better.

Volcanic Isle is a light family game with great components. It offers multiple strategies and gameplay that both children and adults will enjoy. A nice fun game with a theme that adds to the experience.

A father of three with a degree in Mathematics, Jason has spent the last 4 years building his passion for tabletop games. With a collection of well over 300 games he spends a night each week with his family introducing them to new concepts and equipping them with problem-solving skills. Jason enjoys a large variety of games but some of his favorite include Architects of the West Kingdom, Blood Rage, and Terraforming Mars.
Related Articles: Tabletop, Volcanic Isle
Share
Tweet
Share
Submit