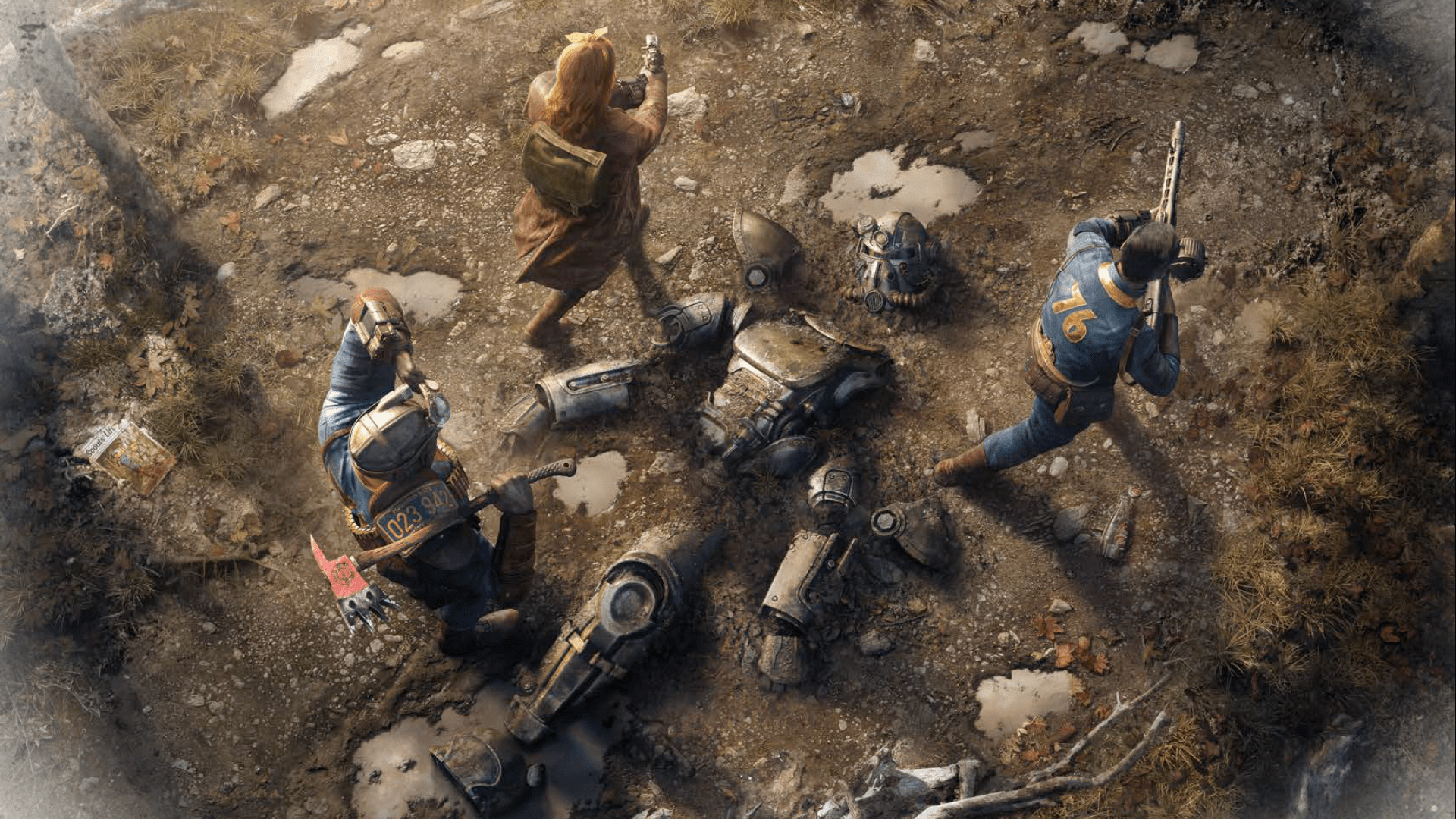 Fallout RPG shows incredible fidelity to Bethesda’s era of games, which is to say that it’s buggy and incomplete despite showing immense promise. Overall I am impressed by the game’s accuracy and depth, but there is no mistaking a few wrinkles in the production quality. Despite some significant issues, the game delivers a marvelous survival based experience that fits right at home in the Fallout setting. Well, a part of it at least.

You see, because of the arcane matter of licensing, this game only includes setting material from Fallout 4. You won’t be seeing references to the Capital of Nevada wastelands, let alone Van Buren. The general features are covered, like the setting’s overall timeline and factions, but as someone who felt that Fallout 4 was a dramatic departure from the narratives and systems that pulled me into the franchise, this does feel like an unfortunate step down from what it could have been.

That’s not to mention the writing quality. Modiphius’ releases are usually among the higher quality out there, but I think the scope of this project eluded them. There are numerous typographical errors, references to pages that don’t exist, and heavy reliance on a GM’s guide that isn’t out yet. These problems simply aren’t acceptable for a release this high profile, even if the laziness helps make the book feel like a genuine Fallout product. 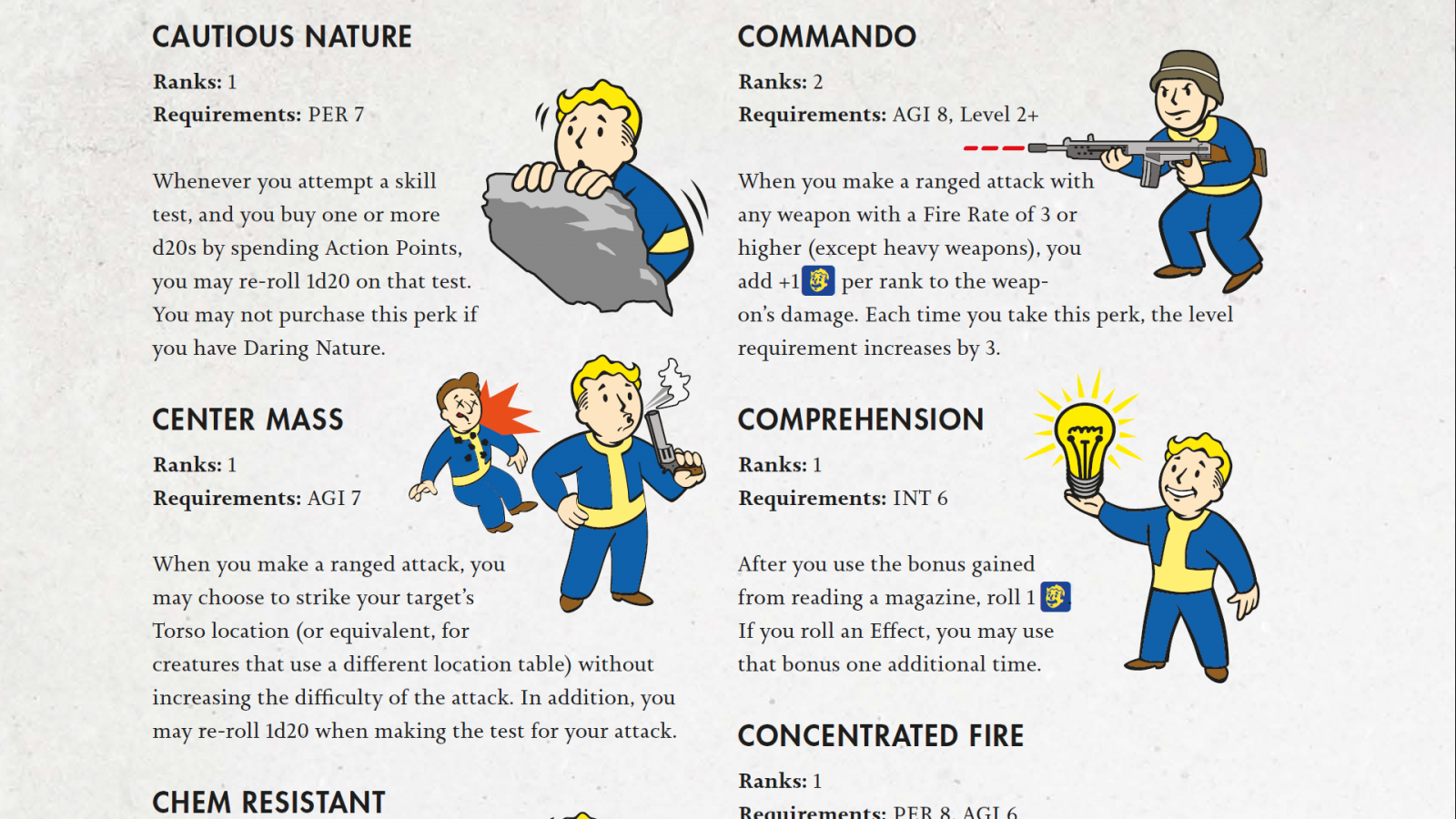 The main focus of the Fallout RPG is survival, to a degree of remarkable granularity. If you are interested in this book, you need to be aware that its sole focus is on making a gritty, complicated set of rules for survival based gameplay. You will be managing hunger, thirst, rest, radiation levels, inventory, and scrounging for supplies as you pick your way through the wasteland. That isn’t even really scratching the surface; the game contains rules for modifying your equipment, the effects on your body of different types of food and drink (like being radioactive or removing radiation), the many drugs and addictions of the Fallout universe, power armor creation and modification, hit locations, and cooking. It’s massive, it’s well written, and it’s incredibly close to the videogame experience. What it isn’t is particularly user friendly.

In its efforts to cleave close to the videogames, some usability has been lost from the RPG as written. Let’s be honest here; as much as you may enjoy the granular survival gameplay on display here, most GMs and players won’t want to manage the weight of 20 different ammo types, their health/thirst/rest down to the hour, the armor on various hit locations on their bodies, the modifications on the armor on those areas, and more by hand. I know plenty who do, and this game’s audience should be happy with it, but you do need to be aware that Fallout is asking a lot of you to get the most out of the experience. These rules are well written and designed, but what is lacking in their presentation is any kind of summary or chart to help you track them all. They are spread haphazardly all throughout the book, making learning or using them an annoying task. Except, that is, in the massive GM guide that isn’t out yet, despite being referenced in the core book. The same is true of the scrounging rules, which denote the rarity and types of items you can find in different locations, but like the other rules are spread broadly over a number of pages, and are not friendly to being referenced during the game. 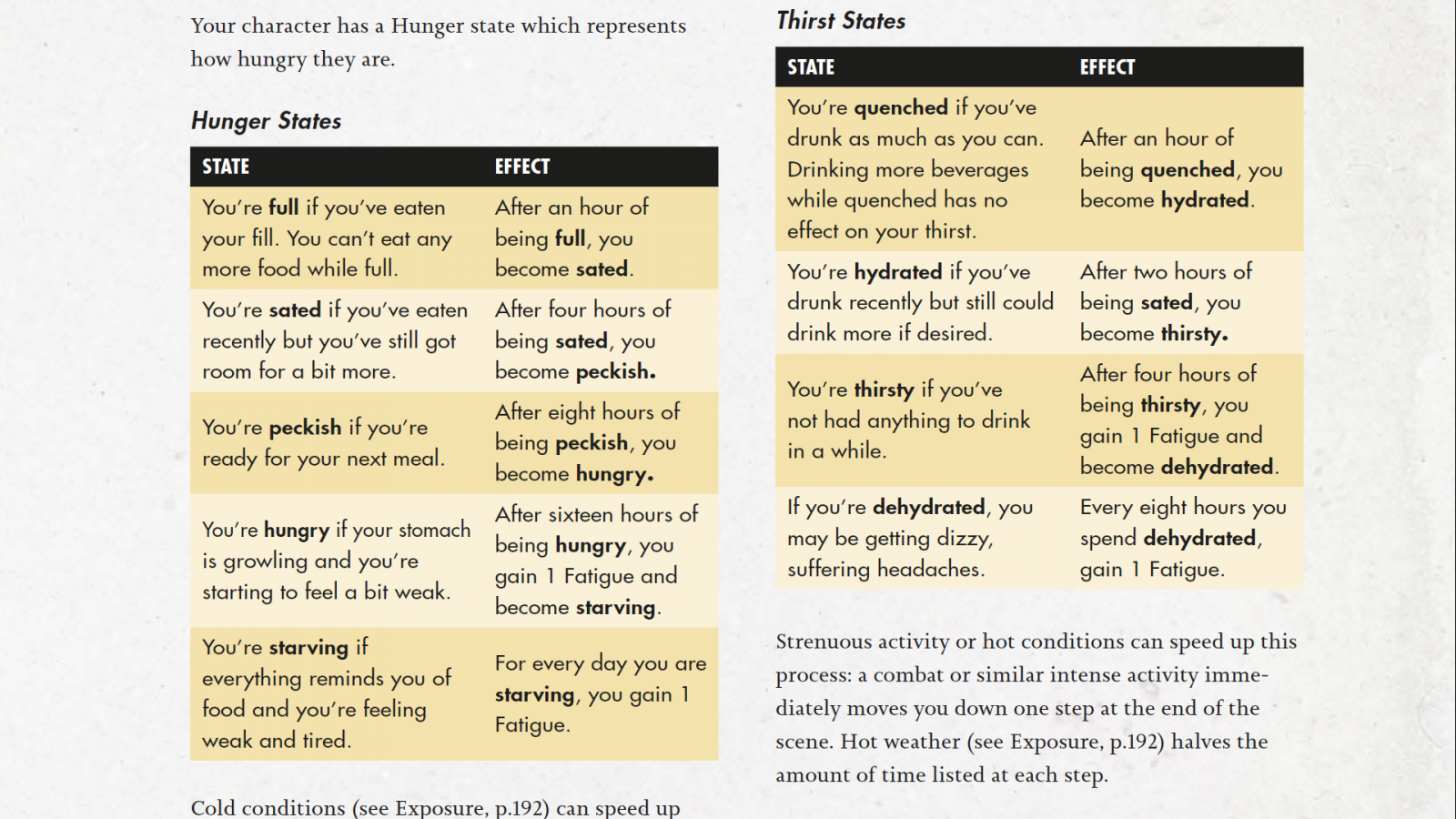 There are also some hiccups into what these underlying rules are. Rest assured, they are by and large great mechanics, but not universally so. Encumbrance is measured as 150lbs+strx10, instead of something more manageable like equipment slots equivalent to your strength. Most survival traits, like hunger, ask you to manage them by the hour but their effects on your body by the scene, which creates an odd interplay between how you track and manage these effects.

That all said, there is some great work on display. The 438 page book’s design is pretty great, with the Pip Boy and his antics guiding you through most of the rules. Those rules are laid out logically, not mixed in with flavor text, and presented in an order that was totally intuitive as I was reading through it for the first time. I would have liked some more variety from the non Pip-Boy art, given how varied and creative the Fallout setting can be, but that’s not to say these gargantuan portraits of a shattered world aren’t impressive whenever you come across them.

Fallout RPG uses Modiphius’ 2d20 ruleset, wherein your characters add relevant attributes and skills together and roll 2d20, attempting to roll under the value. Attributes are Fallout’s typical SPECIAL, as well as the series’ usual skills with the addition of Athletics, Survival, Throwing, and Pilot. Character generation is pretty simple: all attributes start at 5, and you can distribute 5 more or reduce some attributes to add to others. You can Tag three skills to make you more likely to succeed at them, and receive 9+Int skill points to distribute. You then start with one perk, one relevant equipment pack corresponding to your Background, and whichever appropriate features given to you by your Background, like the Ghoul’s radiation immunity or Super Mutant’s extra strength.

Once your character is made, progression mostly consists of the equipment that you find in the field. Leveling up gives you a minor amount of extra HP and skill points, and access to another Perk. Perks hold incredible potential to change your play style, so they do have value for you, despite being the only real means of progression. Magazines contain special Perks, if you find them, hewing close to the videogame experience again. 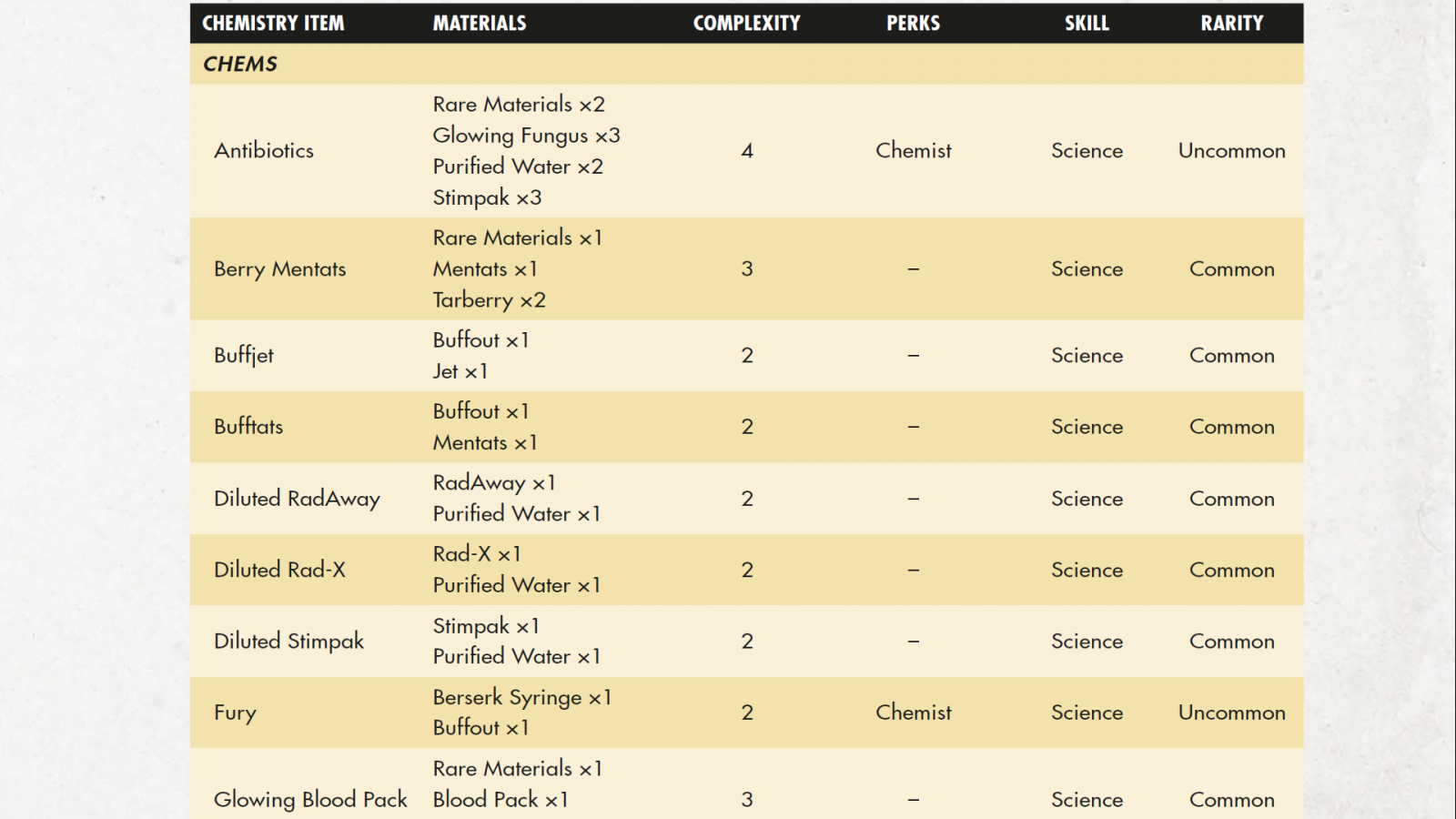 As you can see from one of the MANY pages on equipment, crafting is a focus that will bring a ton of utility to your party.

Something odd about the dice system is how unlikely you are to succeed at most tasks without assistance. Your goal is 1-5 successes, depending on difficulty, and in an untrained skill the most you can expect is 2. This game forces your GM to decide on exact difficulty levels, as every additional success translates into Action Points, the game’s main metacurrency. You can use AP to add dice to a roll, get the GM to answer a question about the situation, reduce time for a test, grant more actions in combat, or add damage to a roll. Your group can store and share as many as 6 AP at a time, and you will be relying on them heavily given how difficult it is to succeed at most tasks.

It would be nice if, unlike Modiphius’ Conan RPG, there were only one metacurrency, but Fallout also relies on Luck as an additional source of points. Your Luck attribute determines how many of these you receive. They have a number of effects, the most interesting of which is to replace an attribute with Luck for a roll, relying on your character’s inherent luck to get through a situation they are not prepared for.

Combat is also largely simplistic: initiative is a flat statistic for all characters, each of which can take a minor and major action during their turn. Hit locations are extremely important, as armor and cover only relates to specific locations on the body. These locations are rolled randomly unless you increase the difficulty of your roll to target one specifically. Weapons have different types of elemental effects that you will actually want to track, especially because armor defends against those damage types in different ways. Radiation reduces your maximum HP, so needs to be carefully managed. More importantly, it can only be healed with the appropriate medication, further playing into the game’s inventory management themes. You will trigger a critical hit by receiving 5 or more damage in one area. Critical hits last until cleared by medical treatment, and more injuries make it more likely you will die. 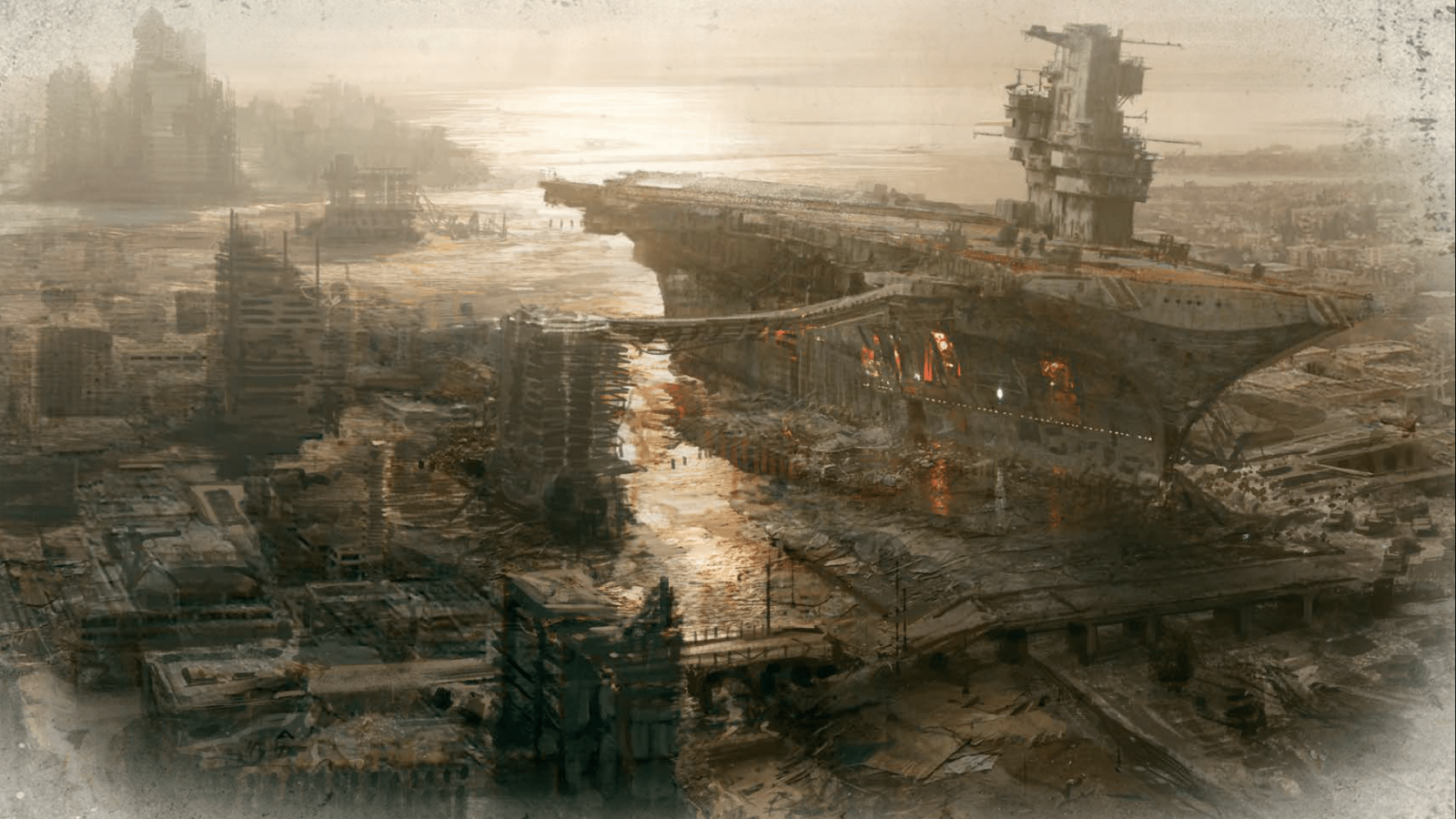 Beyond all of that, the game still has time for a generous array of enemy stat blocks, sample adventure hooks for many locations and factions, a large GM section describing those factions, and a sample adventure. Once the GM’s guide is released with an easier method of tracking all of this game’s features, it and the core book will feel like a massive cohesive package that should give you everything you need to play this game for an extensive period. The items, enemies, and abilities are all ripped straight out of the games (minus features that are excluded for licensing) and this is one of the most faithful and complete setting adaptations I have ever seen.

Do I recommend this? Sure, but only to those who are willing to invest the time, effort, and money for a product with a high barrier to entry. Despite some issues with presentation and writing, this is an impressive product. I just wonder whether this is necessary in the face of something like Mutant Year Zero, which accomplishes most of the same goals with significantly less effort. That’s not to mention the complete homebrew for Fallout: the Big Apple Wasteland, which I have enjoyed immensely throughout the years at the very reasonable price of free.

All that said, this is Fallout in all its glory, with guns and rads and mutants and bugs that should have been worked out before release. If you want the type of game this is selling, you couldn’t have asked for something more comprehensive (except for setting elements). Go forth, wander the wasteland, and try not to be eaten by raiders your first day out.

Fallout the RPG has a lot of reasons recommend it, but to a select group who want an intense survival experience. The book’s flawed writing and missing content are annoying, but count little against the weight of content placed into its many items, factions, enemies, and more. This is the most intense Fallout product I have ever seen in tabletop form, for better or worse, and has enough content to keep you entertained for a lifetime.

John Farrell is a legal aid attorney specializing in domestic violence, living in West Chester Pennsylvania. You can listen to him travel the weird west as Carrie A. Nation in the Joker's Wild podcast at: https://jokerswildpodcast.weebly.com/
Related Articles: Fallout RPG, Tabletop
Share
Tweet
Share
Submit