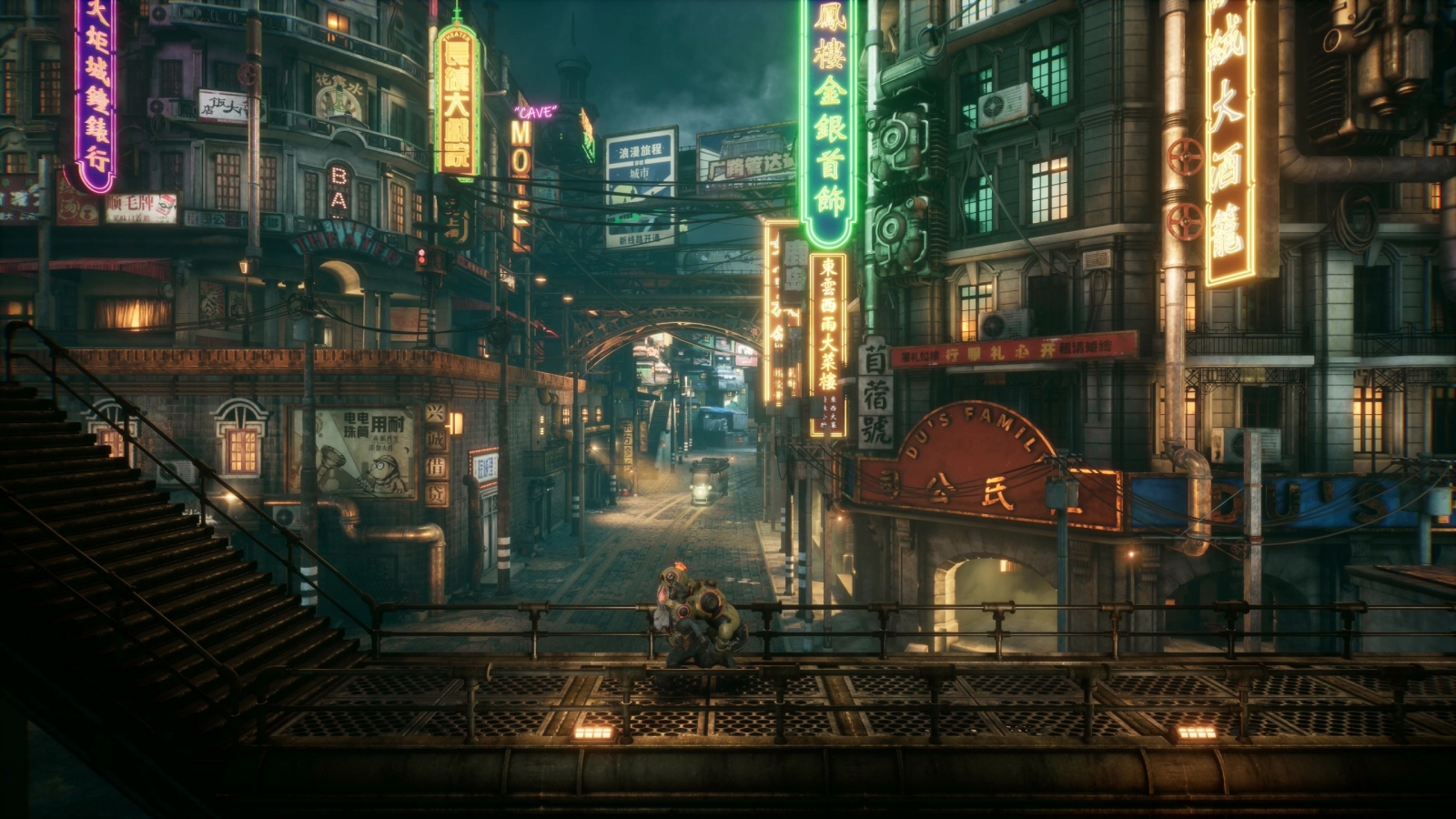 The metroidvania genre has come a long way from its humble beginnings in 1994 with Super Metroid and 1997 with Castlevania: Symphony of the Night. You could argue that the first Metroid in 1986 created the genre, but it wasn’t until the 90’s when the basic principles were firmly established. F.I.S.T – Forged In Shadow Torch follows firmly in the aforementioned classics’ steps, while providing a unique experience that is filled to the brim with content, areas to explore, and secrets to find.

Rayton, a rabbit, long ago retired from his fighting days. Now, he spends his time eating noodles with his buddy Urso, a bear known as a master inventor. Their peace is interrupted when there is a huge explosion, caused by the Spark, a powerful element that the Legion – a roving gang of robots – is determined to possess. The Legion and its army the Iron Dogs have been slowly taking hold of the city, destroying anyone who stands in their path to domination. After the explosion Rayton realizes that Urso has been taken captive and placed in a cell in Torch Tower. Determined to save his friend, Rayton reluctantly picks up his mechanical arm attachment from his fighting days and heads out to take down the Iron Dogs. Little did he know that a simple rescue mission would soon put him in the middle of a war for the Spark between the Cat Clan, the Rat Gang, and The Legion.

Rayton begins with little more than his mechanical arm, capable of powerful attacks, and an MCI Radio crafted by Urso which allows them to keep in constant communication. As he traverses the extensive city, underwater arenas, sewers, prisons, towers, and other areas he will unlock new abilities, additional weapons, and multiple combat upgrades. 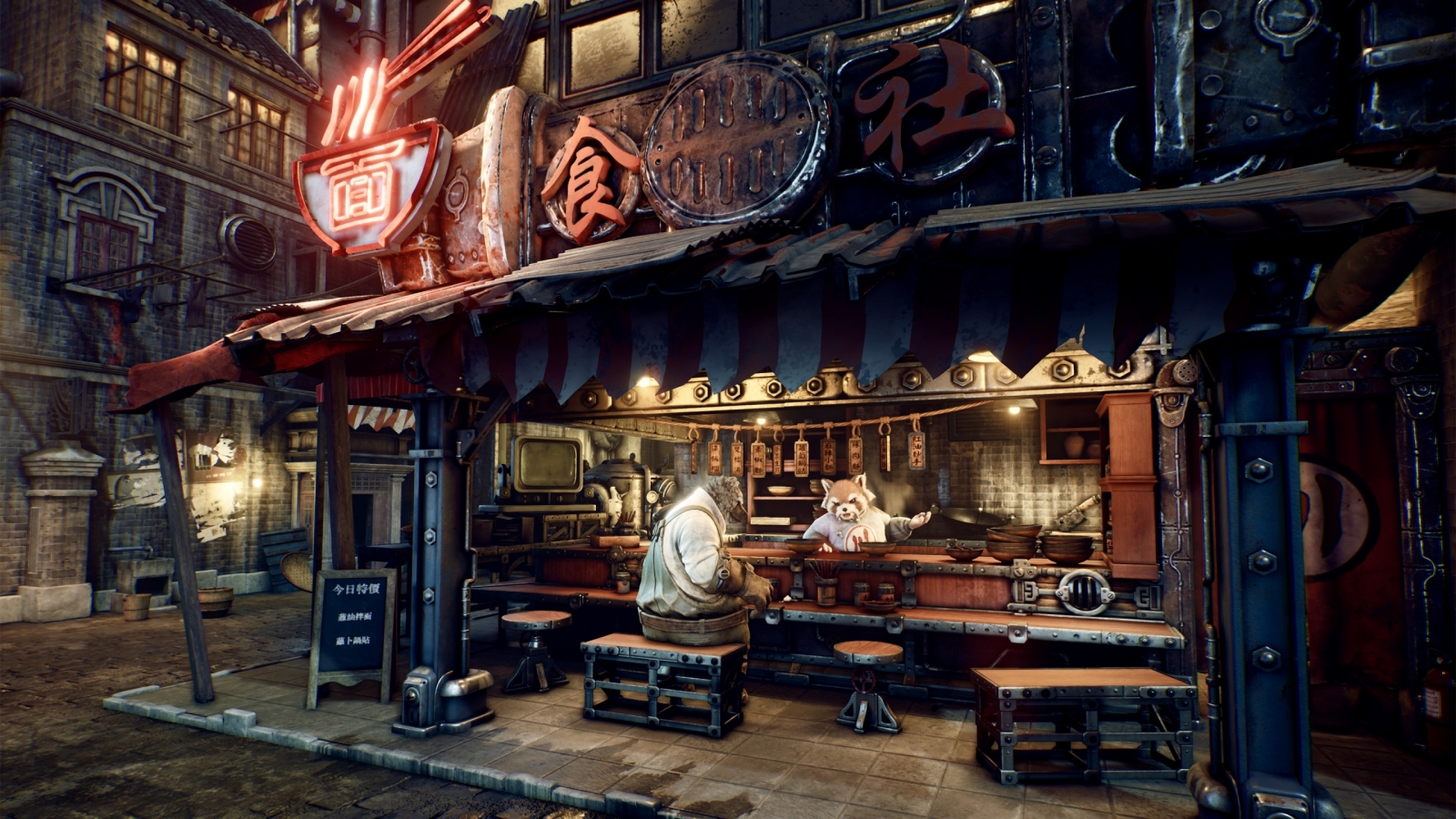 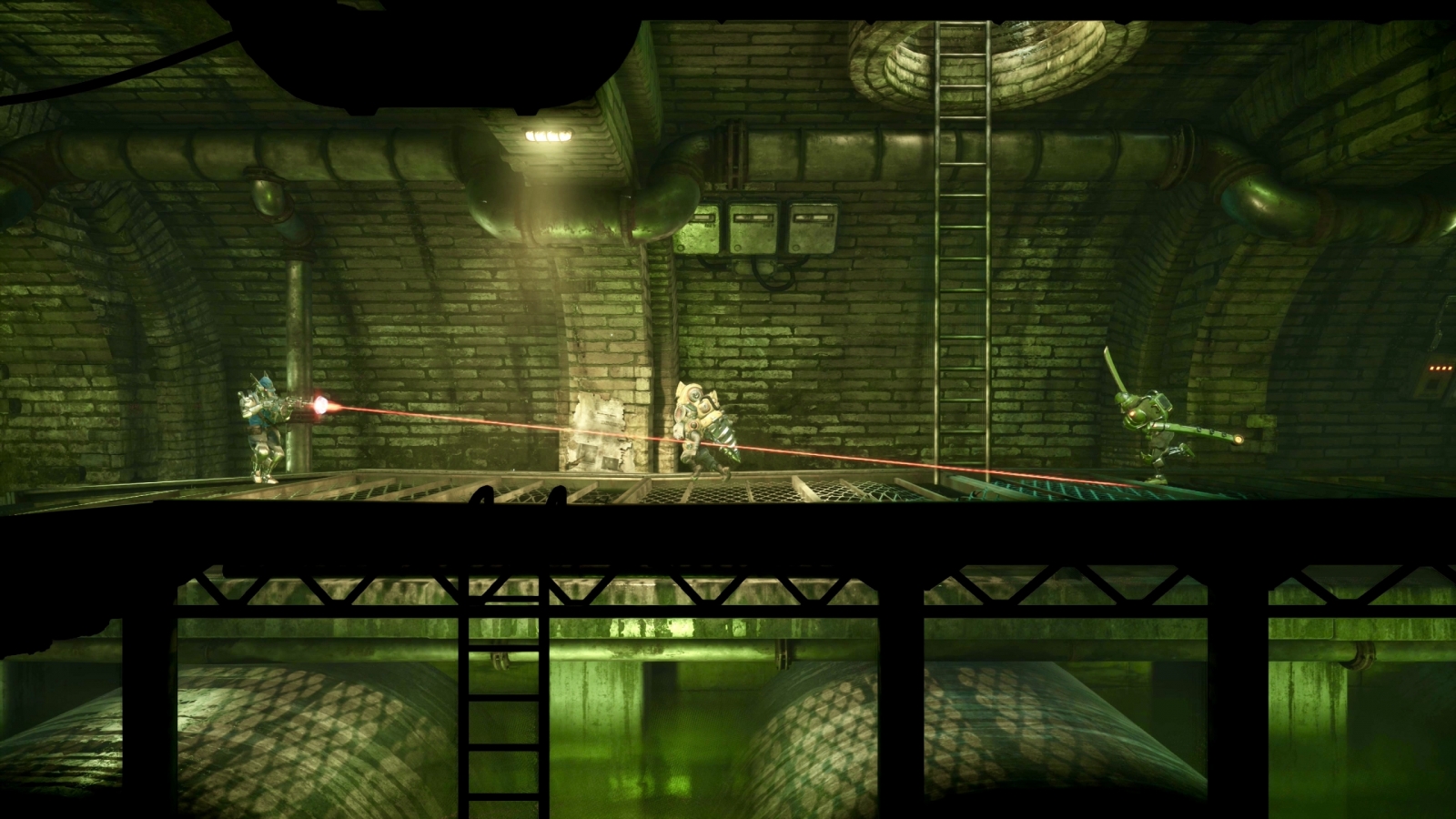 F.I.S.T. Forged in Shadow Torch is essentially a side-scrolling action game set in a fantastically realized dieselpunk world that boasts impressive background detail. While the game is linear in movement, the background is chock full of cityscapes, hallways, alleys, caverns, and other details to give the feel of a fully fleshed out world. The background details are so impressive that I often found myself upset that I could not explore off the beaten path and was instead forced to remain on a 2D plane.

As any fan of the metroidvania series knows, the excitement of this genre stems from completing the maps, and F.I.S.T. is no slouch in that department. There are multiple huge areas to explore, filled with hidden paths, challenging areas to traverse, and unlockable secrets (provided you have the correct skills). When I say huge, I mean it – some of these areas feel like the length of a normal metroidvania game on their own and I was constantly surprised every time I entered a new area only to realize it was just as large as the previous. It is truly an achievement that so many maps were created and that each feels so distinctive. A ton of care and thought went into constructing this intricate, connected world and it shows.

Scattered through this dense world are data disks, plant seeds, posters, and MP/SP/EP upgrades. Data Disks can be used at special terminals located in each area to unlock abilities for each weapon, plant seeds can be sold to a collector for money and various items, MP/SP/EP upgrades will permanently increase each respective meter once three are obtained, and posters can be given to Urso to unlock new customization options for your weapons. These items are the main reason to explore every nook, as they are often well hidden and in areas that make true use of all skills available. Despite the difficulty in reaching many of them, they are well worth the trouble for those wanting to be up to the challenge of the later areas of the game. 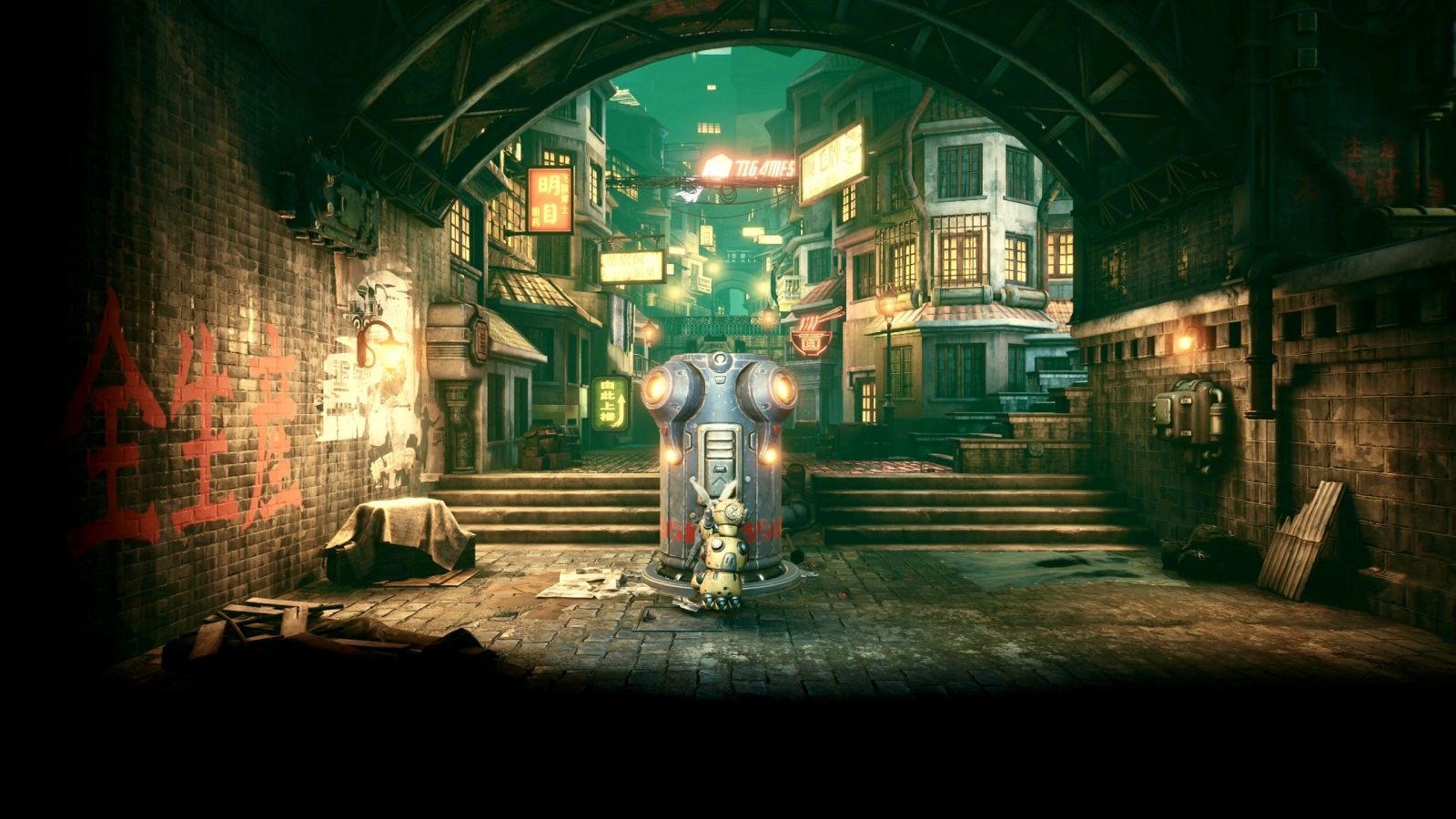 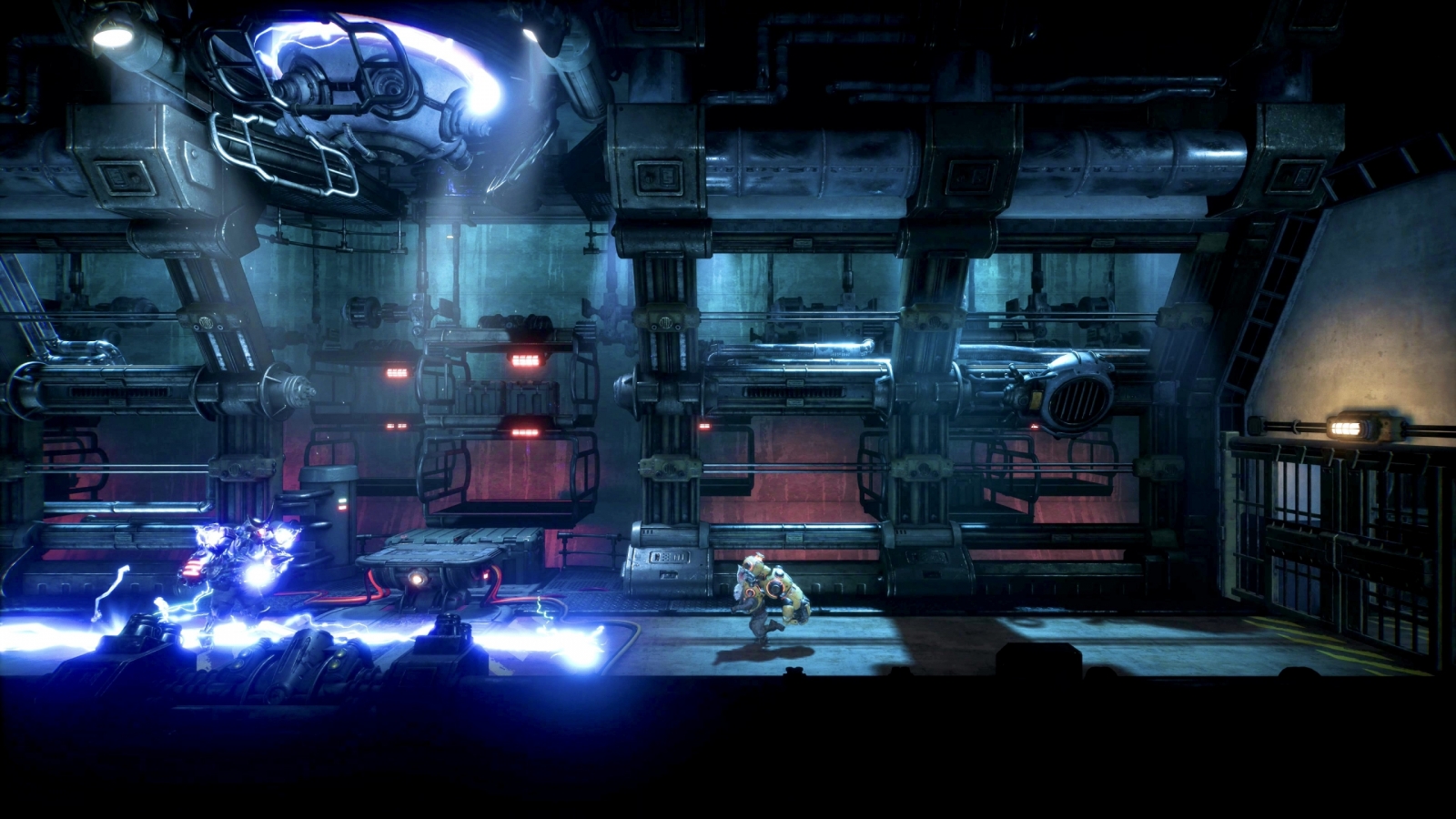 As you progress, you will tackle your garden variety of enemies including those with shields, guns, restraining cords, hammers, and swords as well as a wide variety of bosses or mid-area bosses. Each fight is fun, although the combat does teeter on frustrating when overwhelmed by enemies as the game encourages you to use combos, but you are not immune to attack during a combo – and you cannot quickly back out of a move in progress – leading you to being hit numerous times by other enemies while stuck in an attack animation. To avoid this, you must spend most of your time dashing around the area, taking potshots at enemies until you whittle the odds down to a more manageable amount and can then deal serious damage using special abilities and combos.

Boss fights do not suffer from this as much as you are normally fighting a boss one on one, aside from an odd enemy or two that may get thrown in from time to time. Bosses do have a rather predictable attack pattern, which helps to avoid their more damaging attacks – although they frequently switch up their tactics as their health drops. Make no mistake, even with memorizing their patterns these boss fights are hard. Bosses’ attacks are powerful, they move lightning fast, and often have numerous unblockable attacks – not to mention extra health bars or second parts to their battles where a second boss may drop in to help. You’ll spend a good bit of time fighting bosses and mini-bosses, so mastering your skills, upgrading your special abilities, and learning combos is necessary if you wish to avoid quitting the game in frustration.

Speaking of skills, combos, and your arsenal, each can be upgraded using recharge stations scattered throughout each area. At a recharge station you can rest and refill your health, SP, and MP and unlock new combos for your weapons and skills. Your SP and MP are used for various special items in your arsenal or to unleash devastating special attacks, both of which consume one charge per use. You only have 2 to 3 charges of MP or SP at a given time, so you must plan their use wisely. SP refills as you attack enemies, while MP can be refilled with picks up found along the way or using special execution abilities. MP is used to restore your health, fire a homing missile, or even to block enemy attacks – so it is arguably the most important to keep fully stocked.

Speaking of blocking, you are eventually given batons to block attacks by using MP. That said, I found blocking to be a pointless waste of MP as it is often much better served being used to restore your health. Besides, blocking an attack or two will not mean much when confronted with multiple enemies or a fast-moving boss and you’ll find yourself wishing you had conserved the MP.

While you begin the game with only a mechanical arm, you will eventually unlock a drill and an electrified whip. Any fan of the genre knows that obtaining a new weapon will inevitably mean that it can somehow be used to progress in areas previously blocked, and that is the case here as well. The drill can be used to unscrew doors throughout the world, to quickly move while underwater, and to float, while the whip can be used to slingshot yourself across specific areas and to shut off electrified fences. Each weapon also has a ton of combos to master and skills to unlock, and you can switch between weapons on the fly, supplying a surprising amount of diversity to combo attacks as you can begin with one weapon and smoothly transition to another to finish an attack. This makes combat fluid, fun, and surprisingly deep.

The huge world is mostly traversed on foot and does require quite a bit of backtracking, but there is a fast travel system in a few areas which can be used once you find the transporter ball in a particular section of the map. Despite the fast travel, you will still have to backtrack quite a bit. Thankfully, traversal is fast, smooth, and quite fun for the most part although it does get a bit monotonous when running back through an area multiple times to uncover all the secrets and there are some areas without a fast travel option, meaning you’ll have to travel to the section nearest your goal and then make quite a trek to your destination.

F.I.S.T. has a much meatier campaign than I had anticipated. First time players will need anywhere from 12 to 15 hours to complete the main story but may very well spend upwards of 25 hours to 100% the map and collectibles. Every time that I believed the story was nearing its conclusion, another twist would be thrown, and a new area would open. Thankfully the areas are rather diverse, and the story beats are normally entertaining, giving me the motivation necessary to continue my trek.

F.I.S.T. Forged in Shadow Torch features complex combat, a huge and incredibly detailed map to explore, loads of secrets to find, a lengthy campaign, and gorgeous visuals. While I may have had a few minor gripes and do wish there was less required backtracking, I had loads of fun chasing down The Legion and its Iron Dogs and unraveling the mystery of the spark. F.I.S.T. is a must play for fans of the metroidvania genre.

Richard Allen is a freelance writer and contributing editor for various publications. When not writing for Gaming Trend you can find him covering theatre for Broadway World, movies and TV for Fandomize, or working on original stories. An avid retro gamer, he is overly obsessed with Dragon's Lair. Chat with him via @thricetheartist on Twitter and @richardallenwrites on Facebook and Instagram.
Related Articles: F.I.S.T. Forged in Shadow Torch
Share
Tweet
Share
Submit