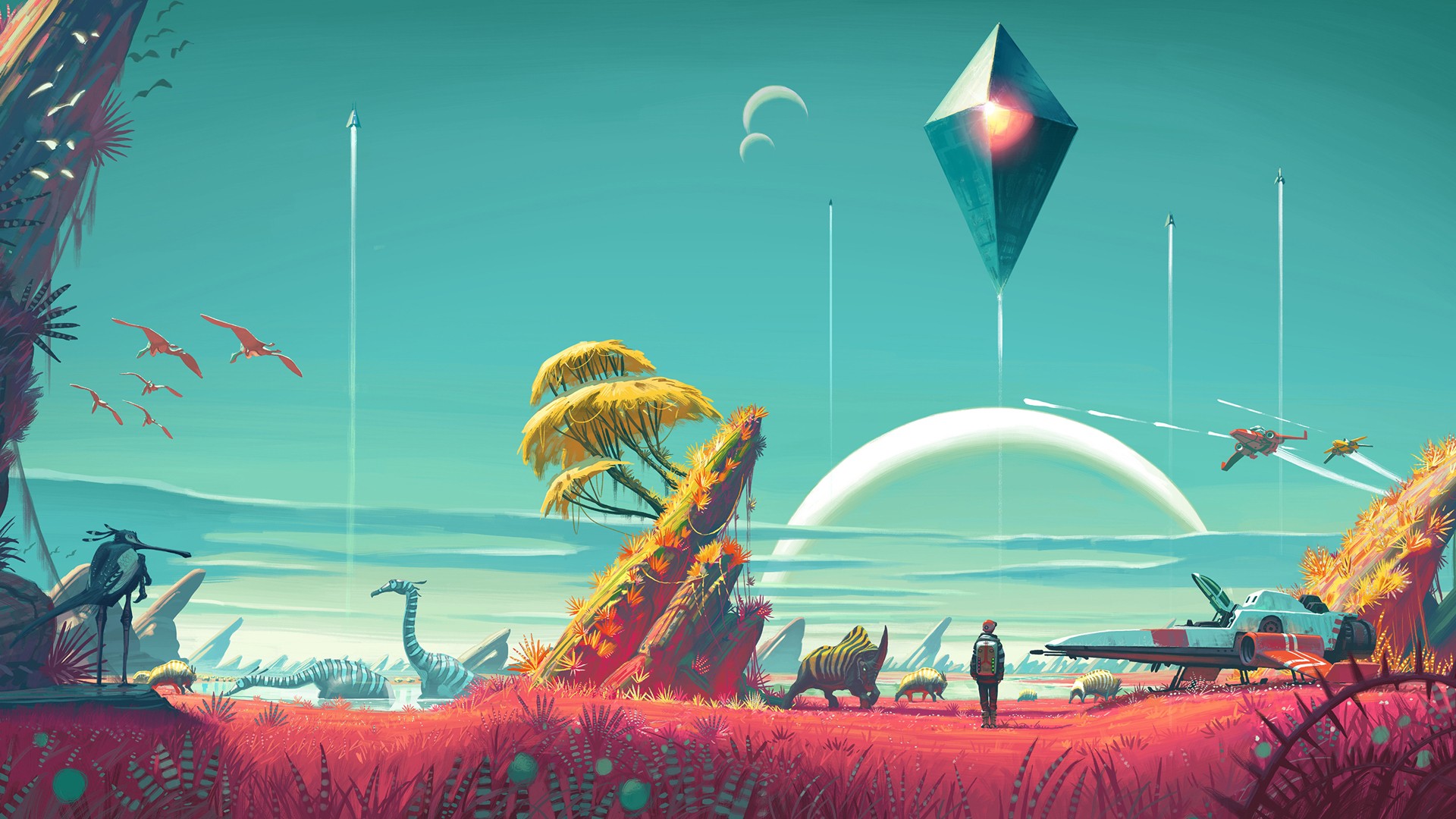 No Man’s Sky is not what people thought it would be. In the recent decade, few games have been as hyped up as Hello Games’ newest adventure. Since its debut trailer back in December 2013, some have have claimed it to be the game of the generation, or in some ridiculous instances the last game we will ever need. It’s neither of those, it doesn’t try to be one of those, and it’s perfectly accepting of its final form: A serene space adventure plagued with a lack of direction, but lifted up by pure heart and creative risks.

Crafting a through-line in a game of 18 quintillion randomly generated planets seems next to impossible, but surprisingly No Man’s Sky achieves it, at least for the first few hours. You awaken in this new world, on a planet, and with a busted-up ship. After cruising around the environment, mining some materials and crafting, you can finally launch your ship. This guidance continues on to help the player obtain a hyperdrive, the tool used for warping between galaxies. It seems like a minor instance, but soon afterward, the player is thrust into an existence with very little guidance.

For the majority of its time, the allure of No Man’s Sky is found by exploring the many different forms of terrain, wildlife, and random occurrences. You burst into a new galaxy and see the invigorating colors and the uncomfortably close asteroids before hitting the left stick to scan around in hopes of finding a sign of life. Once it’s found, you cruise towards a planet and begin investigating. After you have fully explored a desolate engineering station or abandoned ship, you fly on to the next instance and repeat. This forms the major gameplay loop of No Man’s Sky, one you run through ad nauseum as your time continues forward.

This repetition of tasks is largely forgotten because of the absolute wonder that comes with each new planet you land on. You gracefully glide down to your landing with curious thoughts about the atmosphere and wildlife, and not on whatever will continue the story forward. This curiosity goes beyond simple enjoyment derived in video games these days, it’s a sort of childlike bliss that only comes along every once in awhile. When it does appear, you want to encapsulate it and never let go. Unfortunately, that awe eventually disappears.

The actual goal in No Man’s Sky is to get to the center of the universe. The way you achieve that is up to you; there are straightforward routes to take and free-roaming possibilities. I decided to follow the Atlas path, as it seemed to be the most interesting. Atlas appears to be some mysterious being that has ahold of you and continues to lead you forward, and whether this presence is actually leading you in a prosperous direction is the ultimate mystery of No Man’s Sky. Interacting with this Atlas leads to a long, slightly bewildering piece of text appearing on screen every time you reach a new Atlas Interface. After a while, these pieces of text go from curious to simply pretentious. After the sixth or seventh time, they read less like a metaphor for why the universe will collapse and more like something a 10th-grade pseudo-poet would scribble in his notebook.

Once the allure of arriving at these Atlas Interface’s is gone, the point of exploring No Man’s Sky feels non-existent. You’ve landed and interacted with large monuments 30-40 times at this point, and continuing to do so feels useless. You could just continue refueling your hyperdrive and jumping towards the next Atlas interaction, but that’s far from an enjoyable experience due to its tedious nature.

Apart from loads of planets, multiple alien races also populate No Man’s Sky. As an English speaker, your character understands none of their languages when they first awaken. You combat that by exploring planets and interacting with monuments that will help you learn a word or two. It’s an odd system, but one I found to be the most rewarding throughout the entire game. I took a lot of pride in the amount of language I learned, especially when it got to the point where I could basically understand anything a certain race was saying. It felt like I had worked to achieve something while simultaneously bringing me close to other beings without the help of story development. While some parts of No Man’s Sky can drag, it’s brilliant design choices like this that really keep the game afloat.

Theoretically, you would also be looking to upgrade your ship and items on your person throughout the game, but that hardly feels necessary. Certain upgrades, such as a sprint or jetpack upgrade, are vital, but making sure you have the ultimate mining beam is superfluous. That said, acquiring a better ship is an enjoyable endeavor to embark upon. You do this by either finding a desolate ship on a planet or heading to a trade station and bartering with the pilot of one of the other docked ships. Not only does it allow you more inventory space, but the ship design in No Man’s Sky is so wild and varied that it leads you to constantly feel like it’s time for an upgrade. It’s akin to having a nice car, but still eyeing a Bentley. The actual upgrades may not be drastic, but you want the beautiful new machine nonetheless.

With such a vast world, some visual hiccups are to be expected along the way. There’s a lack of physics in the terrain destruction so if you eliminate the bottom of a certain mineral, parts of it may just float in the air. There are also odd texture pop-ins that happen when you approach a planet for the first time. Despite that, No Man’s Sky is a gorgeous and varied visual experience. The unique, thick style of it blends easily into the lush environments that pop out algorithmically. I traveled across a wide variety of planets, many of them boring and lonesome, but none of which lacked in exquisite beauty. Not to mention the insane animal concoctions roaming around.

There have been very few times where I have loved a game like I do No Man’s Sky while fully acknowledging its many issues. It can become very boring, the planets are simultaneously gorgeous and empty, and the crafting system can leave a little to be desired. Despite that, the childlike wonder and mystery that comes with such a monumental world outweighs the negatives. The things No Man’s Sky has done are truly revolutionary for the video games industry, even if it doesn’t stick the landing. It can be slow, but exploring the vast reaches of No Man’s Sky is still one of the most memorable experiences I have ever had in a video game.

No Man's Sky is an unforgettable adventure, one plagued by lack of direction and lack of meat. It brings about one of the most incredible worlds ever seen in a video game, but it doesn't always take advantage of that. Despite the issues, No Man's Sky is a milestone in video game development.