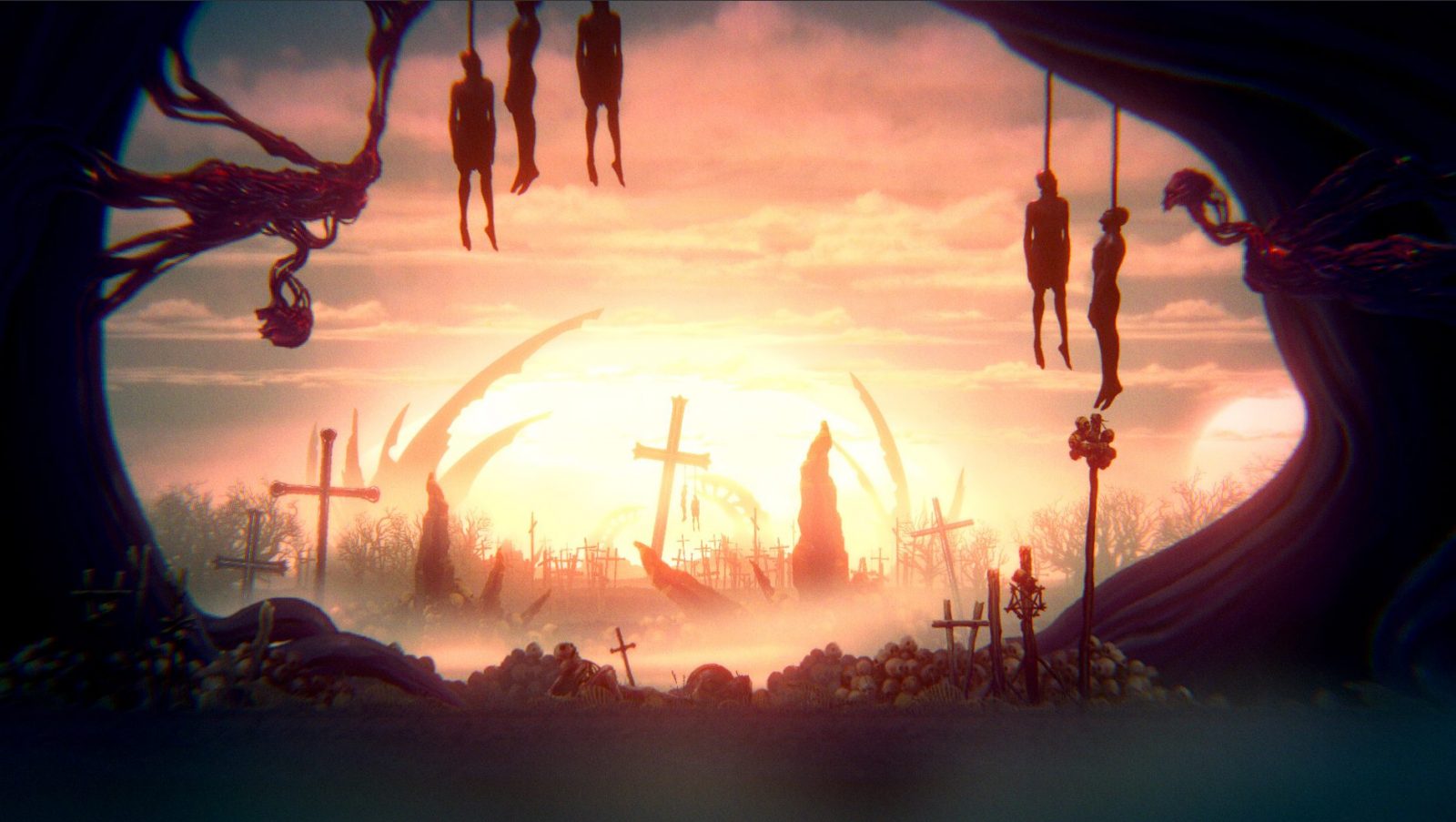 He is the nameless one, a warrior whose thirst for battle is unrivaled.  With his sword and armor, his job is to dispel all evil that dares to step into his path.  He takes great pleasure in watching the last breaths of Hell’s minions seep from their decrepit bodies. Down to Hell is a side-scrolling action game that pits you against countless enemies and massive bosses, all while a hard rocking soundtrack bangs in the background.  Unfortunately, Hell will freeze over before this game is worth playing.

I need to make this very clear, my time with the game was plagued with game impacting bugs from beginning to end. End meaning, I couldn’t play the game anymore because it crashed every ten minutes or so. You begin with the tutorial of the game where you get accustomed with the swordplay. Here you will test out basic and heavy attacks against waves of enemies. Though many of the attacks are locked, you can get a basic understanding of combat. Weak attack and strong attack are the basic offensive actions, but together they string along a fearsome combo. After becoming comfortable with the action buttons, you are thrust into the story. The nameless one was in a treacherous battle when he became seriously wounded. A mysterious woman comes to his aid and crushes his enemies, but all is not done. A greater evil makes itself known and kidnaps the girl before the nameless one can return the good deed. Upon dropping into the hellish wastelands, the game makes sure that the tone is set with the level design. 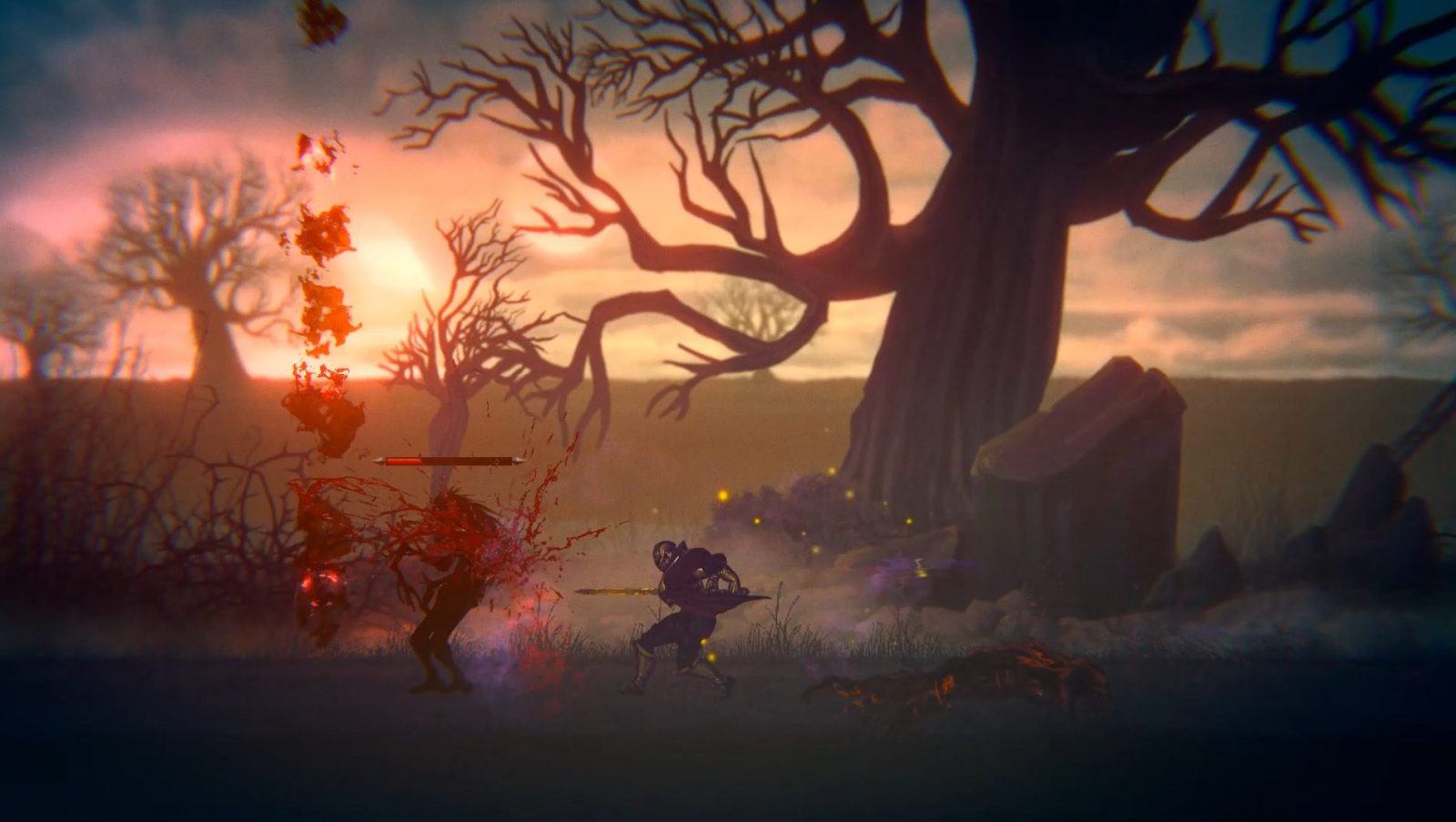 Not even Hell can contain me

With the bright sun in the background and dilapidated trees scrolling by, the world looks sketchy to say the least. The ominous voice of the narrator fills you in on what’s at stake as you make your way through the level. Eventually, you come across an old man who saw the girl being kidnapped. The old man challenges you to save the girl, and never backing down from a challenge, you accept. Leaving the old man’s side, I noticed that the in-game text was stuck on the screen, and it did this every time the narrator or any character spoke. Because of this, many enemies were hard to spot, not to mention that it blocked the health bar. Along with the typical health bar, you have a magic and endurance bar. The magic bar allows you to perform special heavy attacks and fire projectiles, and the endurance bar is used for special physical attacks and the super jump ability. Unfortunately, with the number of bugs in the game, I was only able to make it to the third boss battle before the game became unplayable, so many abilities remained locked in my gameplay.

As stated, the game is narrated as you play, and plot points are filled in by the old man you’ll encounter throughout the levels. Often feeling like the story is just there because the nameless one needs motivation, it’s not deep. Your job is to simply hack & slash. There’s a horrible balance when it comes to the enemies. Some enemies take the expected amount of health when they strike you, but some can kill you with one hit – and it just happens to be the enemy that is obstructed by the text on the screen. I expect some enemies to be tougher, but there are some that will load directly on top of you and kill you instantly, as if the game just randomly spawns them on top of your head. There are moments when the path forward is split, giving you two ways of pressing on. The camera will zoom in or out to give you perspective of the world, but in doing so, sometimes the enemies are off-screen, and because the camera zoomed in too much, you end up taking damage from something you can’t see. 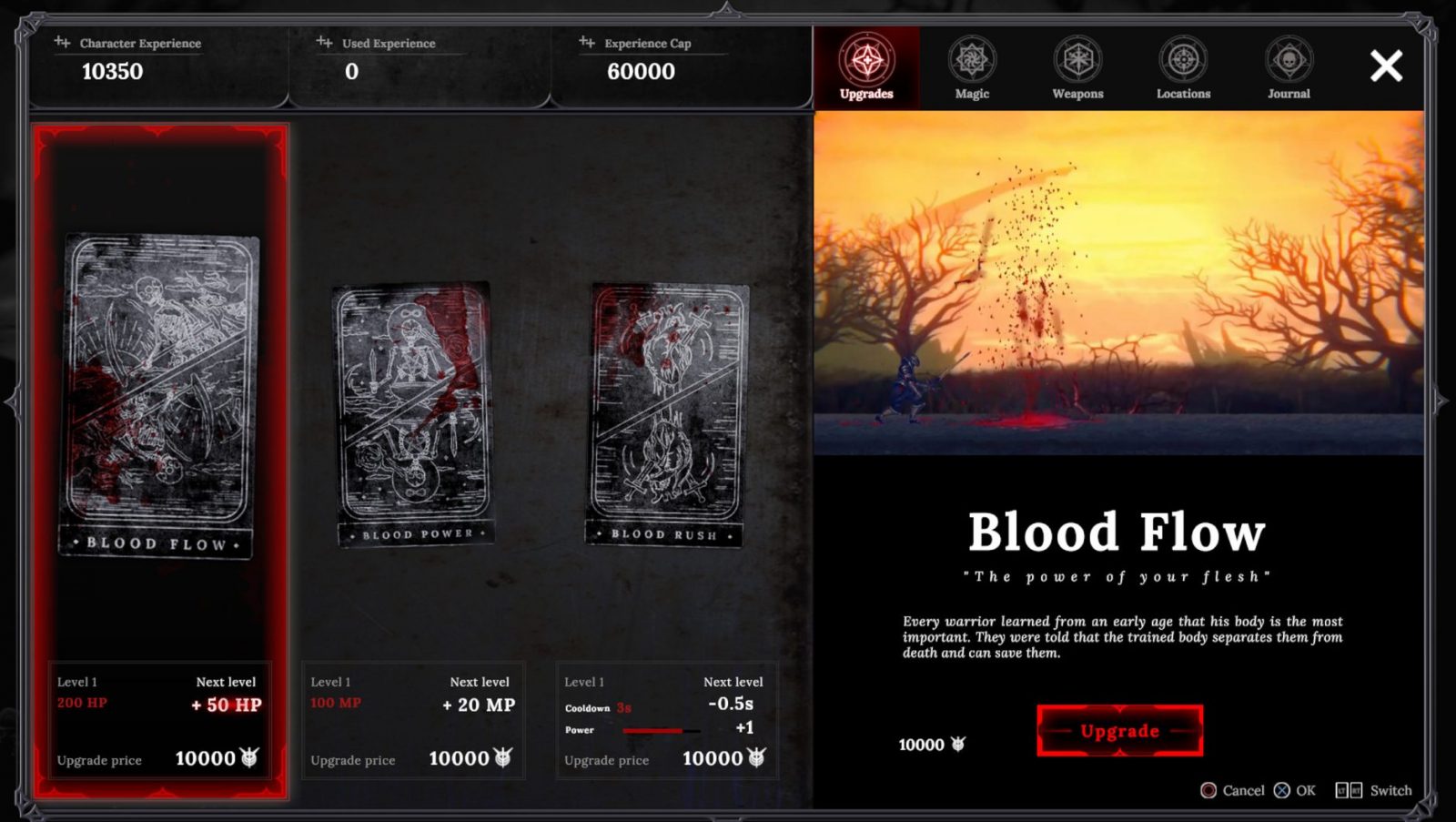 Time to level up

As I fought countless waves of enemies, I realized that there’s no vibrating feedback in the controller or a hit detection response in game – despite the immediate message at the start of the game that says gamepad highly recommended. The combat feels clunky and at times over-responsive. When unlocking the uppercut special attack, I found myself accidentally using the uppercut attack and draining my magic because of the command layout. This is consistent in the game when being forced to use the analog stick. The attack and button layout of the game don’t help either. With some moves asking me to hit the X and B button together on an Xbox controller, any gamer will know that’s an unnatural feeling. While playing, there are open gaps of running when nothing happens, and I don’t have to tell you that a hack and slash game isn’t good when there’s no hacking or slashing. The bosses are big and, as expected, take up a good amount of screen real estate. For me, this was the highlight of the game. Though they were also plagued with horrid hit box detection, their attacks force you to use different fighting styles, something that should be incorporated when fighting other enemies.

Now, the hard part. I want to touch on some of the bugs that were game breaking for me. Simply playing the game, I would experience crashes every time I played. Taking drastic measures, I tested all my hardware, played in safe mode, installed on a second computer, etc; the game was just unstable. I even experienced bugs while troubleshooting the crashing. I chose to start a second playthrough with a different save file. When choosing to load a saved game, if you change your mind and opt to start a new game or load another save file, the controller would disconnect, as if the game no longer recognized you were using a controller. The only way to get it back is to use your keyboard and mouse, which is contradictory to what the developers told you at the beginning of the game. 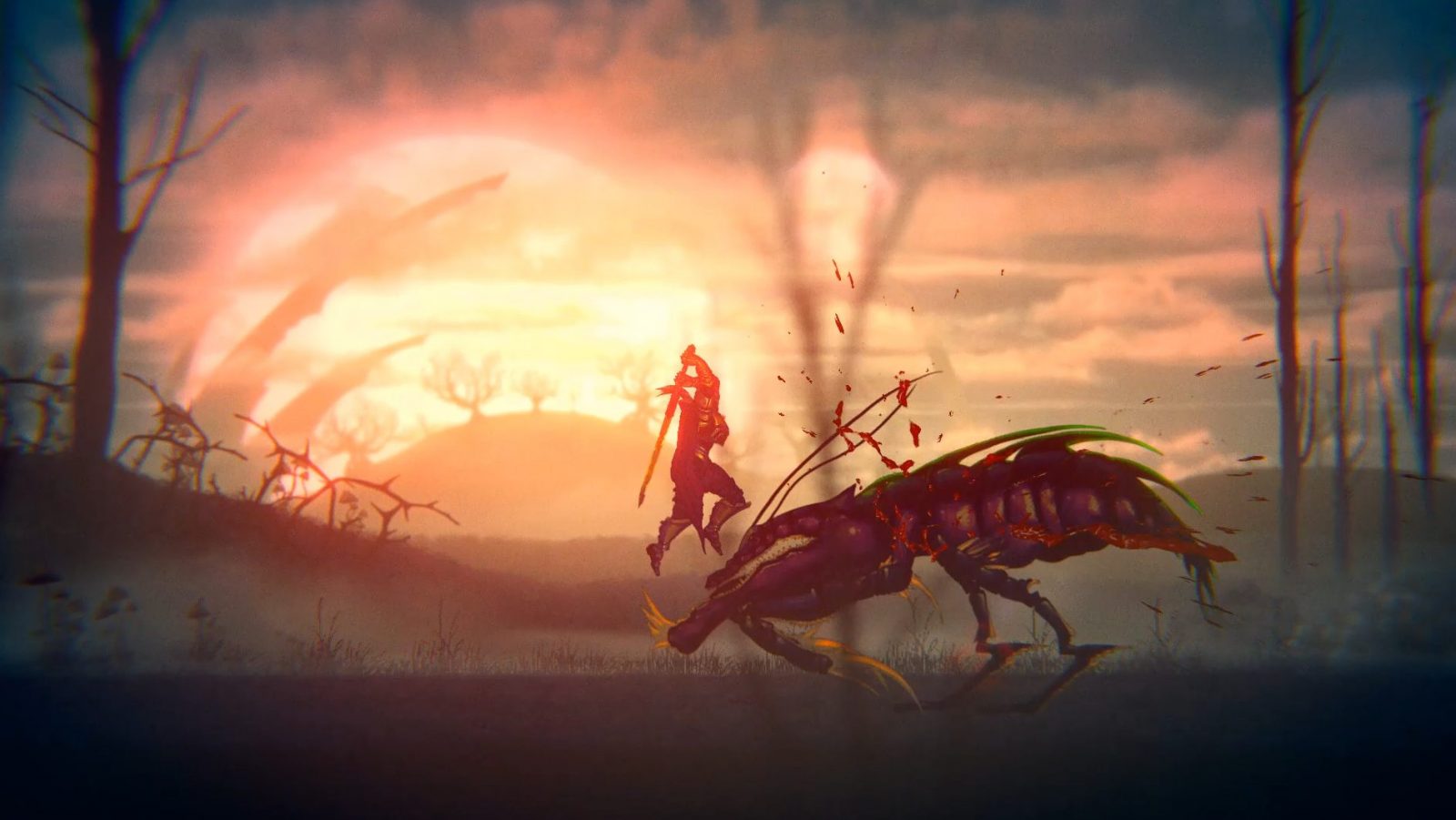 The bigger they are…

Also, when changing the graphical settings, when selecting the ultra-setting, my GPU would completely stop, and I monitored this with multiple software applications. This caused the game to stutter and chug along like someone with a bad ticker. If you set the graphical settings to low or very low, the GPU would immediately ramp up and run as it’s supposed to when it’s set to ultra – and this leads to the next bug. Changing the graphical settings has no change on the world at all. Using video capture software, I was able to compare the gameplay when running on ultra and very low and there’s absolutely no difference. I’d hate to dwell on the negative, but the game feels like an unfinished project. The dialogue captions on screen are poorly written and have misspelled words, enemy hit boxes aren’t accurate, audio balance issues, no enemy collision, and taking damage when simply jumping in the air and coming down are some of the issues plaguing this game.

In recent history, we’ve seen a lot of indie games launch with hardcore combat with musical soundtracks that could be considered a good album. Down to Hell looks to create that same feeling but forgot to make a quality game in the process. The number of glitches and bugs are by far too many to ignore. They impact the game to the point where it’s unplayable and not worth the frustration.

T.K. is a freelance writer, narrative designer, and author. Writing and developing narratives and giving voices to digital world and characters is his passion. As a game writer, QA game analyst, and editor for Gaming Trend, he enjoys being a part of the gaming industry.
Related Articles: Down to Hell
Share
Tweet
Share
Submit