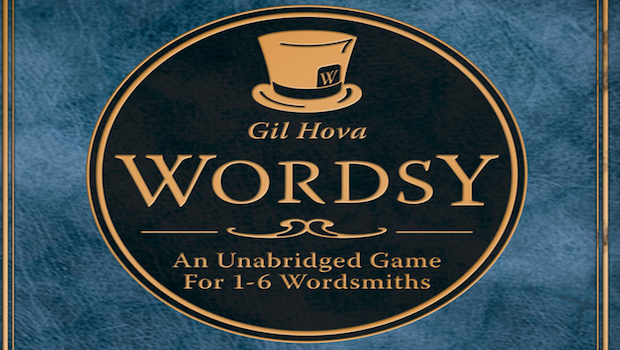 I remember the moment that broke Scrabble for me. The ubiquitous word game had always been enjoyable until a scholar once told me the secret. “Memorize all the two letter combinations,” he told me. I had seen him repeatedly win games by coming up with strange words, or so called words, that would rack up points in the game’s later stages. Turned out he was right; who knew a well placed “ef” or “xi” would result in victory? Scrabble became less of a game about words and more of a game about positioning. It felt cheap. Shouldn’t a word game be based on your ability to create words? Thankfully, Formal Ferret Games’ Kickstarter Wordsy allows wordsmiths an opportunity to unleash their sesquipedalian prowess, without the pesky problem of positioning.

Wordsy is played using only consonants. Letter cards are dealt out in a two deep array above point values ranging from five to two, giving you eight letters for a round. You then need to come up with a word that contains some or all of the letters laid out before you. The beauty of the game is that you aren’t limited to the letters given to you. As long as the word contains some of those letters, you can use any word you’d like. Using n, l, d, and t, for example, you can create words like denationalized. The more of the letters from the array you use, the more points the word will score for you.

Since you can build any word using the consonants available, you are no longer restricted by word size.

Scoring isn’t as simple as Wordsy comes with a timer. Whoever finishes a word on their pad first flips the timer. All other players have 30 seconds to finish a word. If the first player manages to score better than all or most of the other players (depending on how many players there are), they receive bonus points. Otherwise, you can receive bonuses for topping the first player. Additionally, rarer consonants like z and q are worth more points. Z is worth two extra points, so using a z above the five column is worth a total of seven. The timer element keeps the game flowing smoothly, a blessing for a word game that could get bogged down by people struggling to think of words. Oh, and yes, you can’t use proper nouns in this game either.

At the end of each round, half the array is removed and replaced by new letters. The next round begins in the exact same way with time bonuses increasing in value the farther along you go. After seven rounds, you tally the points to see who earned the most. The game plays very well with any of its recommended one to six players. The solitaire rule is quite good, and the game would even work well in a classroom or party atmosphere without losing any of its qualities.

Scoring comes from how you use the letters in the array, especially letters that add bonus points.

Wordsy’s strength is that it allows you to use your entire arsenal of words. Each play through garnered new words for our group. Creativity comes into play since words or their related words may not be reused. Happen knocks out happens, happening, etc. from the list. That alone would make for a decent game, but Wordsy’s use of the timer really adds a level of tension to the game. Staring at a group of letters, you are almost overwhelmed at first. Then, suddenly, someone says they have a word and flips the timer. Do you grab that six letter word and be done with it, or do you push your luck to think of something better? Part of the fun of the game is to see how people react to the sudden time crunch.

Traditional word games have long used the limiting letter concept for game play. Wordsy brings a refreshing look at word games by removing those constraints. The result, which may sound like an oxymoron, is an action packed word game. Fast, fun, and challenging, Wordsy allows you to finally use all those words you can never seem to fit into daily conversation.

Wordsy (on Kickstarter till November 30)

Players: One to Six

Wordsy is a word game that opens up Webster's dictionary for your disposal. Wordsy's use of just consonants allows you to build any word you want, and the timing mechanism ensures the game moves at a steady pace. For anyone looking for a unique take on word games, Wordsy is an excellent choice.