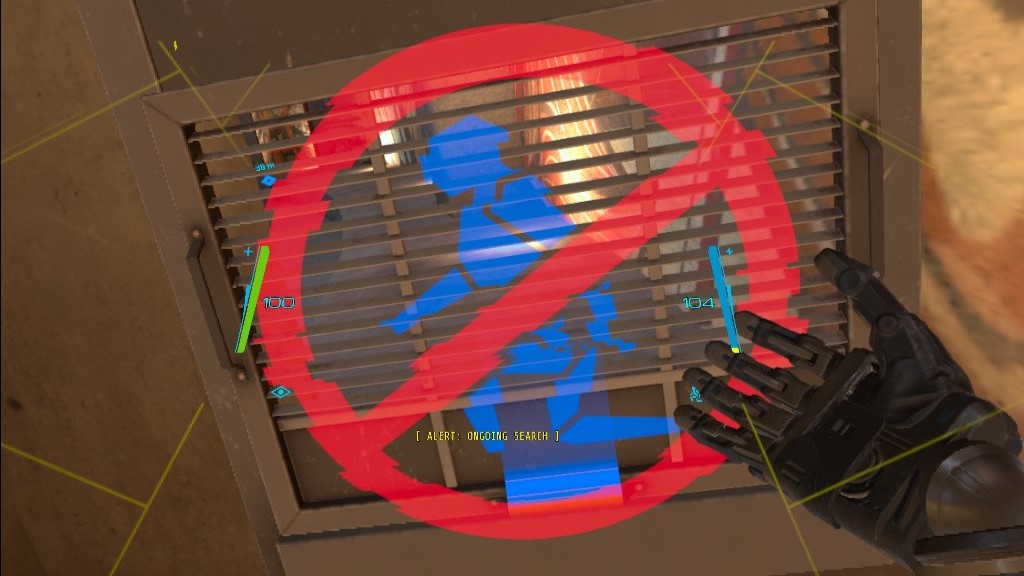 As Espire agent codename Poe, you’ve been in a coma for a long time. During a routine simulation possessing a robot, you suddenly regain consciousness. The mission, already in progress, is to find and stop a mysterious organization from launching their SLAM missile, capable of spreading nuclear fallout across the entire world in a single blast. Even in a simulation, however, the mission ends in failure. With little time remaining and all other Espire agents compromised, only you can find where they’re hiding the SLAM and shut it down for good.

Espire 2 is the sequel to VR stealth game Espire, and it’s some of the most fun I’ve had in a stealth game since Metal Gear Solid, VR or no. But I’m getting ahead of myself. In Espire, you remotely control one of two robots through VR. Essentially this just means that if you run out of health your only penalty is respawning with a new bot at the last checkpoint, but in context it’s a neat VR within VR concept.

Whether you’re controlling Sooty or Sinder, the basics of control remain the same. You move with the left stick and sprint by pressing it down, and crouch by pressing the right stick or turn by moving it. You can also grab things from a distance or climb metal surfaces with your magnetized hands by using the grip button, using anything in your hands such as guns by pressing the trigger. Espire Vision, a night/x-ray vision mode, is additionally at your disposal and accessed by holding your hand to your head and pressing the trigger. It’s very useful for marking enemies or tracking their movements. If you’re in a really desperate situation, you can also hold B to slow down time, though this will use a ton of energy for its duration.

There’s no option for teleport movement, as that would understandably break the game, but I don’t find that to be an issue thanks to the game’s innovative comfort mode. While most games will limit your field of vision while moving, Espire 2 replaces the black vignette with a simple gray room. You wouldn’t think that would help with nausea initially, but it helps ground you in somewhere stationary while a little window you’re looking through is moving. I still got sick after a while, but this feature helped me play for longer periods of time. 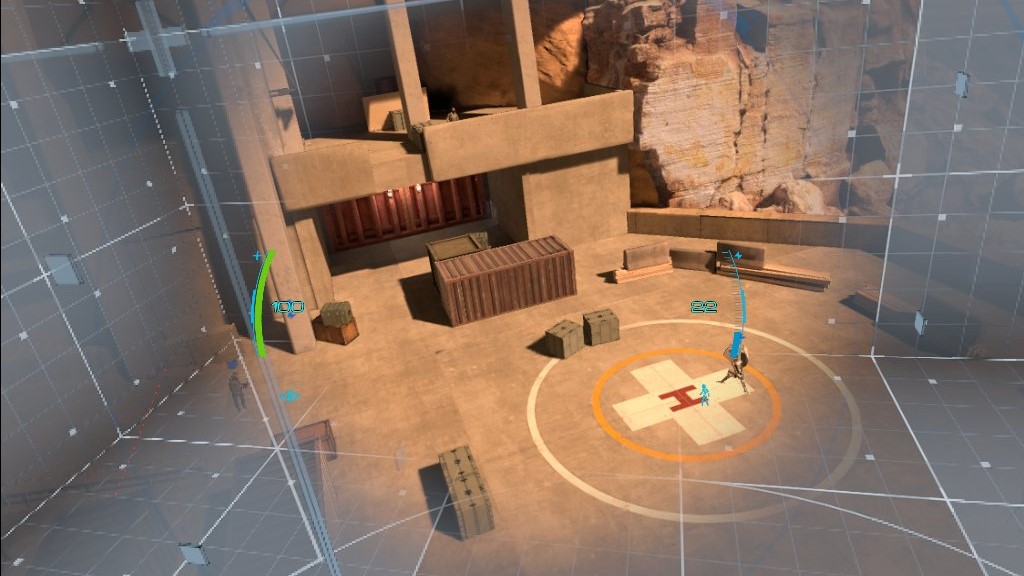 Each of your bots is suited for different situations – at least in theory. Sinder is larger and more combat focused, while Sooty is smaller and stealth focused. In practice, however, Sinder is by far the more useful of the two thanks to its tranquilizer darts. By holding one of the triggers, you can activate a slingshot type tool on one of your arms, then using the grip button to pull a lever back and release it to fire. Sinder’s tranquilizer darts are invaluable compared to Sooty’s devices that allow you to throw your voice. Ideally you’d use that to distract enemy guards using the voice commands or just choosing one with the Y menu, then sneak up and stun them with your integrated electric baton. However, I found the baton to simply not work most of the time, so your choice is essentially between removing a guard from the equation non-lethally, or just leaving them where they are. I picked the former every time.

You will occasionally be forced into combat, and you can hold up to three weapons on your person at once: two small guns like pistols attached to your hips and one large firearm strapped to your chest. Unlike Bonelab, I found these slots worked very reliably and never needed to check if a gun actually stayed where I put it. 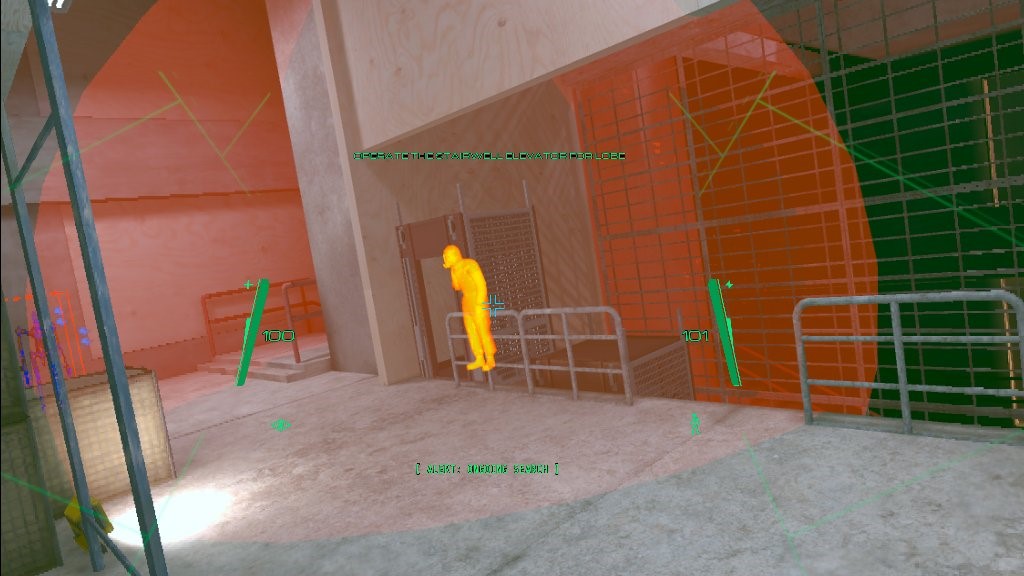 You probably don’t want to go guns blazing though, you’re still pretty fragile no matter which robot you possess. If you do find yourself damaged, you can thankfully use the aforementioned baton to repair yourself, using up some energy in the process. This is mostly what I used the energy meter for, because I’m not that great at stealth games, so I always limited my use of the slow-mo ability. You can replenish energy by waiting or grabbing some glowing canisters to restore about 20 points each. Energy is also used for hacking, either in story mandated segments or to unlock ID-tagged enemy guns for your use. The minigame has you moving the baton to a glowing orb that moves around, which I found very tedious. It also uses up a ton of energy, so I tried to avoid it outside of when I was forced to.

While Espire 2 can be mechanically uneven, the level design is uniformly excellent, making for some tense sneaking missions. It feels like every level introduces something new and interesting, with each gimmick not overstaying their welcome. One level takes place in a canyon and has you doing a lot of climbing, while another has you escorting someone who’s a living EMP so you can’t get too close. I couldn’t understand the story without context from the first game, but the music is also fantastic, with tracks I would definitely seek out for listing outside the game – in particular the song that plays when enemies are searching for you. Where it works, it’s a ton of fun, but when it doesn’t it’s almost unplayable. 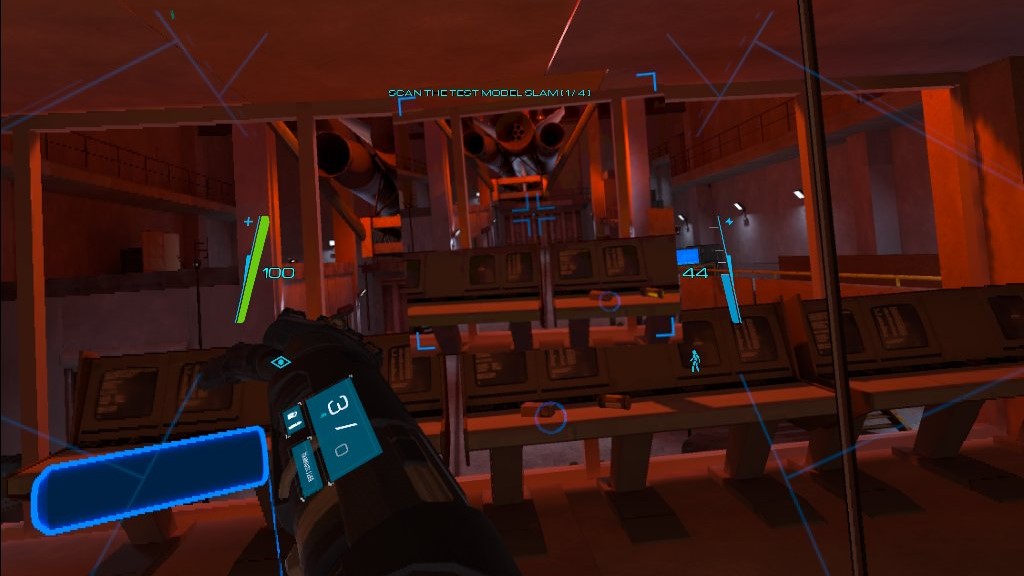 I played Espire 2 on the Quest 2, and it comes with a ton of technical problems. The most egregious of which is an odd issue where the game will randomly reload the environment, interrupting whatever you were doing at the moment. While it occurred in just about every possible scenario, I found it mostly triggered when climbing which would often cause me to lose my grip and fall back down. There’s no rhyme or reason for this reloading as far as I can tell, and it becomes incredibly frustrating when you’re just trying to accomplish a simple task but the game just won’t let you. I never had the game crash, but I did encounter other issues like enemies getting stuck in walls while still able to detect you, quest markers not showing up, objectives not proceeding properly, and even getting stuck out of bounds once. There’s a great game here, with a few issues, but it’s unfortunately buried under technical problems that make it hard to enjoy.

Espire 2 can be a fantastic stealth game, with interesting levels, unique mechanics, and great music, but getting there requires suffering through myriad performance issues.

David is the kind of person to wear his heart on his sleeve. He can find positives in anything, like this is a person who loved Star Fox Zero to death. You’ll see him playing all kinds of games: AAAs, Indies, game jam games, games of all genres, and writing about them! Here. On this website. When not writing or playing games, you can find David making music, games, or enjoying a good book. David’s favorite games include NieR: Automata, Mother 3, and Gravity Rush.
Related Articles: Espire 2, Indies
Share
Tweet
Share
Submit