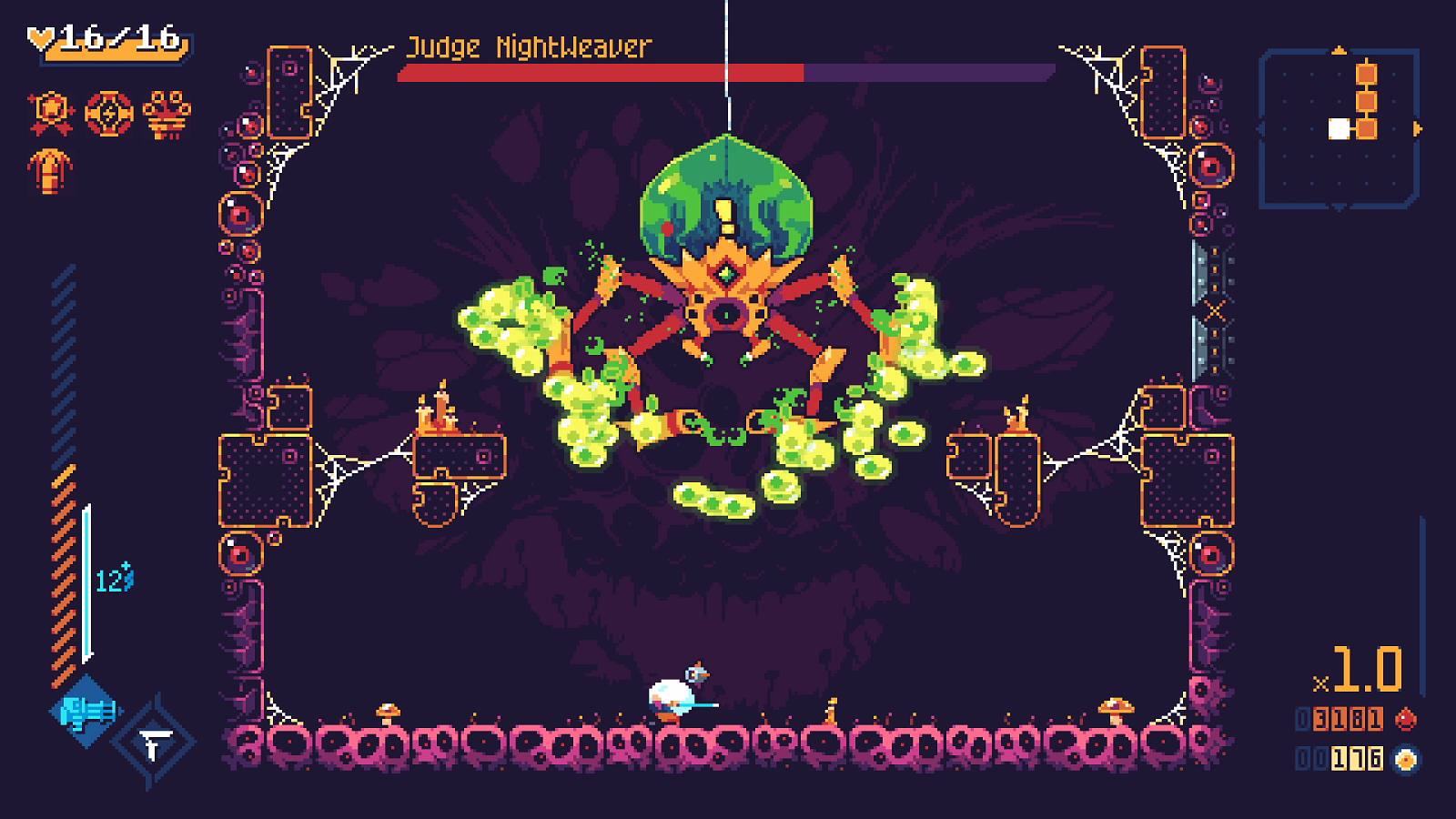 As I’ve reiterated countless times, the Rougelike isn’t a genre I’m very great at. However, thanks to a lot of games I’ve reviewed on this site, I’ve grown to like the arcade-like difficulty and length of runs, and even though my butt gets kicked way too hard, I’m starting to get used to the challenge these games provide. You know what I ALSO like nowadays? The PlayStation Vita, especially with the news that the digital store won’t be going down. Originally Flying Oak Games’ Vita swansong, ScourgeBringer’s handheld port is a wonderful Roguelike with challenging difficulty and almost perfect controls. 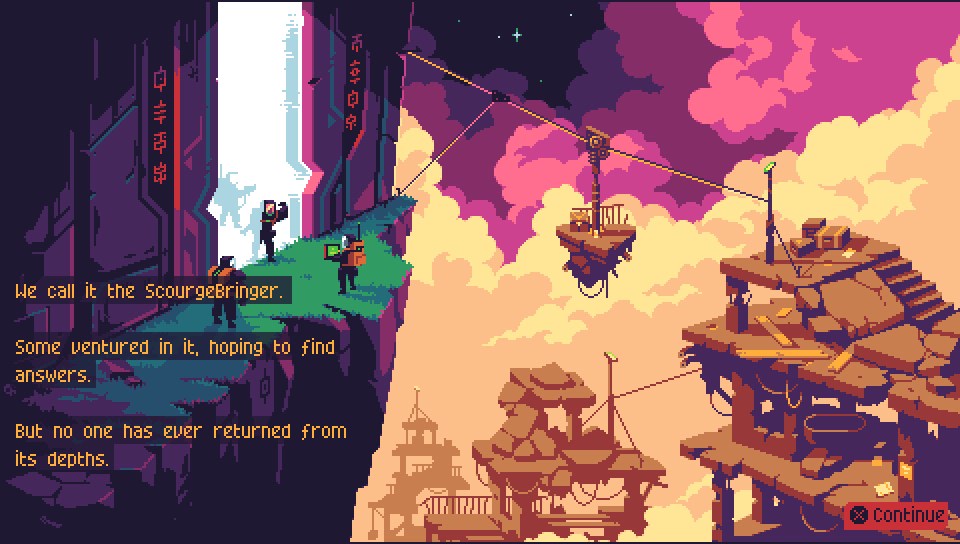 The malicious titular ScourgeBringer ravages the world, and those who enter the accursed building are doomed to die within its walls. Enter player character Kyhra, who, along with her drone BLAST.32, journeys into the cursed halls to save humanity from destruction. ScourgeBringer has a light story, which is usual for a roguelike, but you can get some lore during runs by picking up text logs randomly scattered across the setting.

The main gameplay loop in ScourgeBringer is, put simply, amazing. You’re tasked with exploring five different areas to destroy the end-of-level Judges; in order to unlock the opportunity, however, you’ll need to defeat mid-boss Guardians scattered across various rooms. Each biome world has a variety of different challenge rooms that are procedurally generated, with enemies packed in most of them. You have a sword you can use as a main attack, with BLAST.32 acting as a secondary arm that’s activated by the rear touchpad. 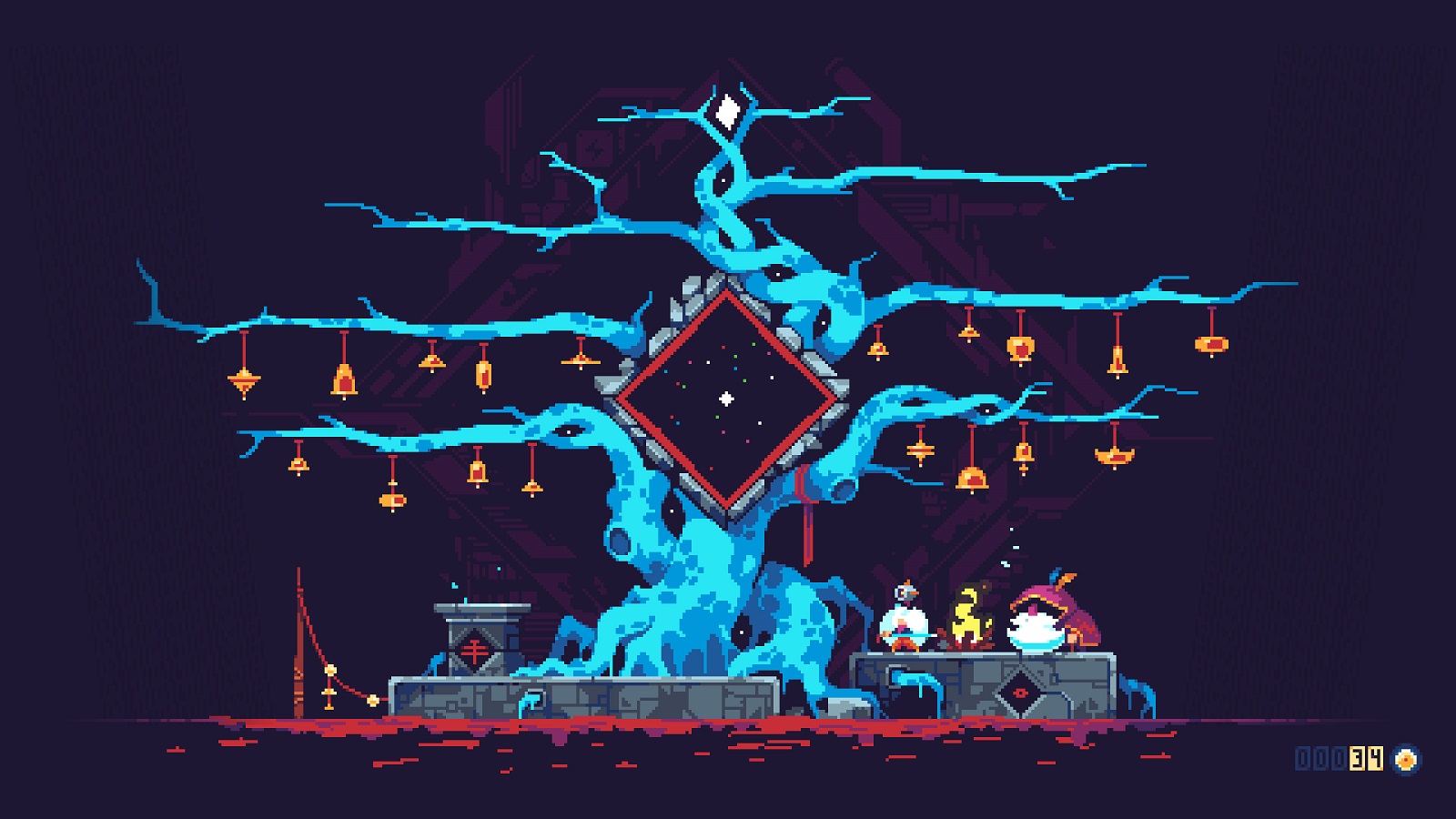 If I could sum up the game in one word, it would probably be, “attackbecauseyouaregonnadieifyoustickaroundformorethanasecond.” Um, that’s a little overexaggerated, but much like most roguelikes, ScourgeBringer is HARD. From the first biome, you’ll get your hide kicked more times than you can shake a stick at. You see, there’s no way to defend yourself completely, save for a strong sword attack that can cancel out or deflect bullets (depending on where your skill tree is). You’ll need to dash in and out of enemy fire, much like a bullet hell shooter.

Thankfully, you have unlimited dash attacks that can be chained with a sword attack. Unfortunately, there isn’t any mercy invincibility by default, so if you get hit and don’t know what to do, prepare to go down quickly. What follows is a brilliant dance to the death as the precise controls are exemplified here; I was able to string together attacks and alternate with my secondary arms quite well, and adding unlockable fury attacks to the mix makes you feel like you can tackle anything. I died quite a lot, but most of my runs felt like a personal skill problem rather than one of the controls or mechanics. There are also accessibility options you can enable like slower bullet speed and even invulnerability should you want an easier time with the game. 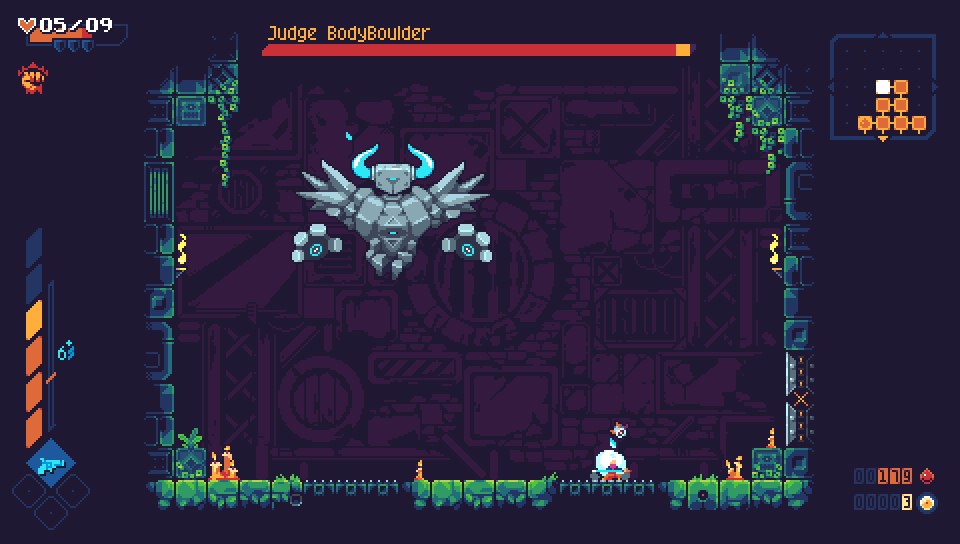 The roguelike aspects of the game are well done too. When you die, you’ll be taken to the Chiming Tree, which acts as a small respite where you can talk to an NPC, check up on a bestiary of enemies and obtained memory logs, and upgrade yourself with Judge Blood, which acts as your permanent currency. You can also collect blood by defeating enemies, though regular blood will only stay with you during a run, not after. Judge Blood upgrades are permanent, however, and you can make yourself much more sustainable after a few runs. The progression is good enough, with you grabbing an upgrade or memory log every few runs to entice you for one more go. It doesn’t do anything outrageously unique with the random dungeon aspects, but executes its main gameplay loop very well.

As a Vita title being released in 2021, I commend Flying Oak Games for making such a lovely port. The pixel art and enemy design look gorgeous, with the mid-boss Guardians and end-boss Judges being lovingly rendered in a nice pixel style. (It almost makes me forgive the fact that they pummeled me in two seconds flat the first time I was up against them.) The performance is overall fine, though because I feel like this game was made for consoles, I found there was noticeable slowdown when a ton of enemies were on the screen. This isn’t much of a problem, but did cause me to lose a point or two of health because I wasn’t anticipating some slowdown. 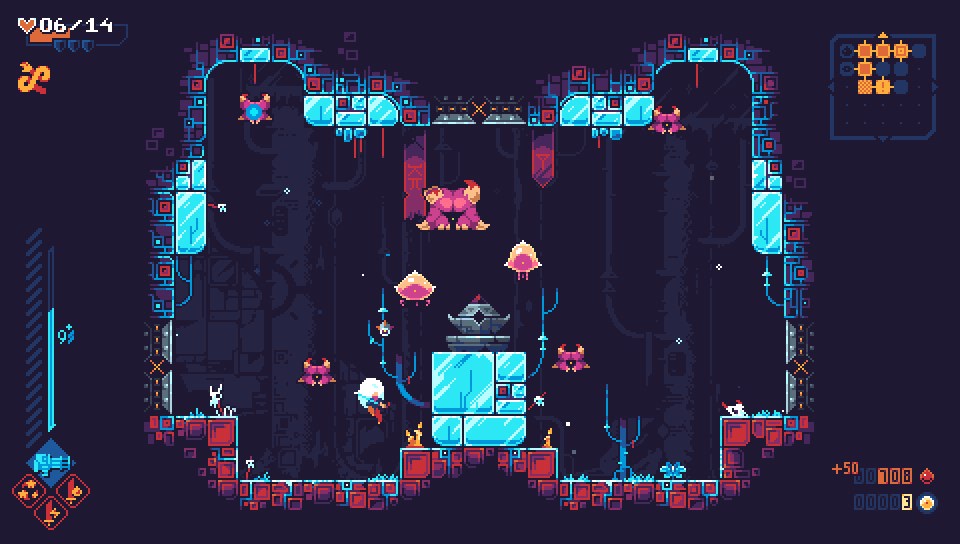 In addition, this port uses ALL of the Vita’s buttons, which is cool but also forces you to use the rear touchpad to execute secondary arms and fury attacks. While this sounds like a cool idea in theory, I would always misfire my guns a bit too early and miss an attack; by default, your secondary attack is an auto-aim, and mapping this to the right analog stick is not recommended. I understand there were compromises made with this version, but this issue was a bit more egregious than the former. All in all though, if you’re looking for a true portable version of ScourgeBringer, this is the way to go.

While the less powerful Vita version of ScourgeBringer does have a few performance issues, this is a great way to get into the addictive roguelike. With some brilliant swordplay, gorgeous pixel art, and a great progression system, you should prepare your handheld and get ready to judge the Judges.

Elisha Deogracias is an aspiring accountant by day, freelance writer by night. Before writing for Gaming Trend, he had a small gig on the now defunct Examiner. When not being a third wheel with his best friends on dates or yearning for some closure on Pushing Daisies, he's busy catching up on shonen manga and wacky rhythm games. Mains R.O.B. in Smash. Still doesn't know if he's a kid or a squid.
Related Articles: Indies, ScourgeBringer
Share
Tweet
Share
Submit