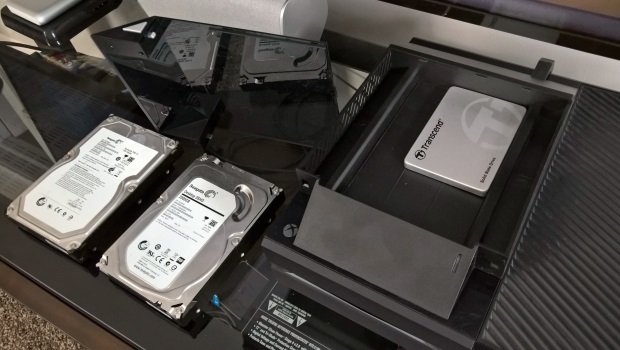 It’s likely that, if you’ve owned one of the current generation consoles for more than a year, you may have run out of disk space. Data Bank, one of Nyko’s latest peripheral offerings, provides expanded storage space by providing a housing and connections to install your own hard drive. In this review I took the Xbox One version for a spin, which was remarkably easy. The Data Bank delivers on the promise of using up to full-sized 3.5-inch hard drives, which have a potential cost-savings benefit over the more typical 2.5-inch “laptop” variety, as larger sized drives are generally cheaper when it comes to per-gigabyte cost.

In my testing, I used three different types of drives: an old 2010 model 1TB Seagate hard disk drive (HDD), a new Transcend 512GB solid state drive (SSD) and a brand new Seagate 2TB solid state hybrid drive (SSHD). The value of a hybrid drive is questionable, but the idea is that you get the cheap storage of a spinning drive with an 8GB cache of SSD NAND memory which holds the most frequently used data.

Nyko’s drive enclosure, rather than drawing off internal power like portable USB hard drive expansions, has its own external power adapter to handle the extra electrical load. This means the console’s power supply doesn’t have to work harder for yet another spinning drive, but it does mean you will have to have at least one two-prong AC outlet available. The other downside to external power is that unless you unplug it when you turn your console off, it will still draw trace amounts of electricity. You can expect the spindle drives to produce low amounts of white noise while they idle.

The Data Bank itself is well constructed, and in testing several hard drives I’ve found that the SATA power and data ports lock the drive in well, and using the included foam buffer, it keeps 3.5” hard drives securely in place. Furthermore, there are wide, flat rubber feet underneath which prevent the vibration of the drive from transferring to the console itself. This prevents rattling, creeping and prevents scrape marks on the Xbox beneath.

Both the USB 3.0 and power couplings pigtail off the back of the Data Bank, and with the contours and glossy finish, the Data Bank blends into your Xbox One naturally. There is only enough USB cable to plug into either of the two ports in the back, and the power cable is segmented with an in-line lock to prevent the power connection from falling out. Two contoured release buttons on each side near the front of the unit allow the top to slide forward, granting access to the hard drive bay with surprising ease and zero tools. The sides are deceptively open, providing a similar style to to the Xbox One’s aesthetic while also giving the hard drive enough room to cool itself off, and avoid needing to add additional fans and their subsequent noise.

Whatever drive you decide to insert in the bank should be recognized by your console, and the Xbox One will then offer to format it. If you were interested in using this as a bay to swap drives in and out for playing media, this is also a fantastic setup. When you initially connect a drive, the Xbox One will offer to format the drive. If you refuse, you can then open up the drive contents in the Media player and access your supported files accordingly. I should note that it remembers the drive, so it won’t prompt you to format every time you pop a familiar drive in the system. You can, of course, access the settings to force a format should your intentions change.

If the Data Bank had a weakness, it would be that it does not provide a USB hub to at least maintain, if not increase, the number of USB ports available. Given that it is taking up one of the three ports on the Xbox One, adding a permanent device to your console, it may make you consider getting a USB 3.0 hub. There are other expansion bays on the market which offer additional USB ports, though none I’ve come across handle driving a 3.5 inch hard drive in such an elegant package.

I ran some basic performance tests with different drives. My Xbox One is a Day One Edition, so its internal hard drive is a 512MB model that runs at a paltry 5400 RPM, similar to most Xbox One models and shared with most spinning laptop hard drives. I could have gone through a battery of tests and spit out results across different actions to chart performance, but that isn’t really indicative of the Data Bank’s functionality. The point was to see whether the USB3.0 drive access made a difference positively or negatively, and if it were better used as the primary drive or simply more space to hold less-played games.

I’m happy to report that as long as you aren’t using a low-speed eco drive, the USB3.0 access and data throughput should cut down load times. For example, Call of Duty: Black Ops III shaved off over five seconds on any drive in the Data Bank over the internal drive during the loading of the safe house from the campaign menu. To be exact, the internal drive took 41 seconds, where each drive tested took less than 36 seconds. I was surprised to see the SSD didn’t do significantly better than the 1GB HDD from 2010, however the load times aren’t necessarily dependent on seek time alone.

If you don’t have an Xbox One Elite which comes with a 1TB (hybrid) SSHD, you’re probably going to see similar improvements by putting even an old PC hard drive back in service. Regardless of performance, many games take over 50 gigabytes these days, so it won’t take long to need to find a use for more room, and the Data Bank fits the bill nicely.

If you’ve got a hard drive that you want to use to expand your console with, the Nyko Data Bank is the most elegant solution. Keeping in mind that you’d be losing a USB port to attach any run-of-the-mill USB 3.0 external hard drive, it’s an easy recommendation and is simple to set up. Sleek, convenient, quiet and stable puts the Data Bank as one fantastic piece of hardware and well worth the price.

Born and raised in Winnipeg, Canada, at a young age I was forced to decide whether the harsh northern winters were going to claim my fingers, or to turn to the safer pursuits of indoor activities. Little did I know that a little game called Ninja Gaiden would bring my digits more pain than frostbite ever could. Starting with Vectrex and C64 games and moving forward through the era of electronic entertainment, I sampled as much as I could in the different platforms, and began my interest in PC gaming from wrestling with DOS memory management. While console games were a part of my earliest gaming memories and I certainly had played on most platforms including 3D0, all things Nintendo, PS1 and the like, truly the PC was my domain until the Xbox. As an old PC gamer, I ever chased the cutting edge technology. Eye of the beholder with CGA 4 colors was my first step down the the path of blowing thousands of dollars on PC upgrades over two decades. Ultima 7, with the Guardian talking to me through my monitor, still haunts my dreams and keeps me ever hoping for a decent Ultima 8 and 9. From the 3DFX SLI VooDoo2s and Aureal to today's GPU driven DirectX games, the new and shiny pictures seem to keep me going. My PC gaming has slowed down with the market shift though, and although I have choice games that will ever be on PC, I have found myself in console gaming with a bit of portable gaming in my life. Back around the turn of the millenium (and long before fatherhood), I had fired off an email offering to help Ron with a little-known site called ConsoleGold. Little did I know it would be be a part of my life to this day. While I've seen my fair share of shovelware (thanks Ron!), I manage to try and find the fun in most games. Leaning towards sandbox and action titles, I've grown to love games for their potential to reach art. Console agnostic and excited for the progress of tomorrow, I fancy the latest and greatest, but still enjoy the good old classics ... as long as they've been revamped from their 8bit graphic roots.
Related Articles: Nyko Data Bank
Share
Tweet
Share
Submit