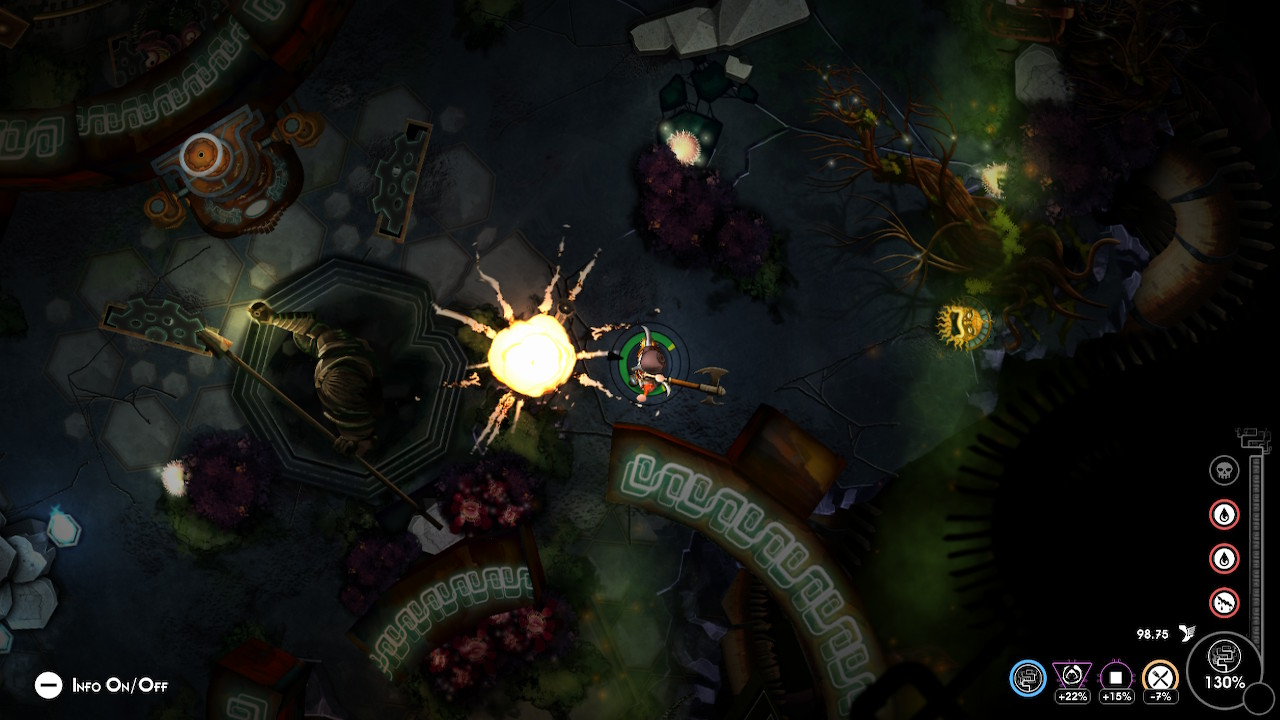 Nobody’s perfect, and that’s a fact that we have to live with. Some people try to fix their problems, while others just roll with the punches. Then there are those who turn their flaws into strength. That basic idea is a core point of Soulblight, where things that might usually have been seen as negatives can be used to make you stronger.

Soulblight is a top-down, action roguelike that puts your skills to the test. The gameplay boils down to you trying to make your way through a series of areas in the Sanctuary. Deep within the Sanctuary, sits the Tree of Life, corrupted by blight, and you are attempting to cure it. It won’t be an easy journey, so be careful; be prepared to die a lot.

Each time you start, you begin in a lobby that contains a shop, a blacksmith, a storage chest, and more. You talk to the guard in order to venture out into the Sanctuary, and your run begins. In each section, there’s a broken mechanism that prevents you from immediately running to the next area. In order to progress, you need to find the “missing part” somewhere nearby. It’s usually in a chest randomly placed around the area; sometimes it’s a regular chest, sometimes it’s a living chest that may bite you. The living chests can be disarmed if you obtain the right tool, but if you don’t have it, you can still take items from that chest at the risk of hand injuries. It’s not a huge setback, but it’s something to think about.

The combat is simple but not easy. You can attack, block, dash, and grip. Dashing can be used to move faster or push an enemy away if they’ve grappled you. If you’re prompted to grip, you can press the button to hold an enemy close and then attack to do some extra damage. It can be dangerous because the enemy can hurt you as well. You’ll mostly be focusing on attacking and blocking, which require timing and precision. If you time an attack wrong, you may leave yourself open to a massive hit. I’ve done that plenty of times, and unfortunately haven’t gotten much better at it. The way injuries work in this game is interesting; you can accumulate a maximum of four before you end up succumbing to them. That doesn’t mean you can get hit four times and then die on the fifth, it means that you can build up four injury status effects, and any new ones end up killing you. These could be concussions, gaping wounds, infections, and much more. Some of these can be healed with time, but others require you to use healing items such as stitching kits, antibacterial gel, bandages, and more. Not only that, but some of the conditions get worse the longer they aren’t treated. The injuries make you weaker, so the healthier you are, the better.

Now, the most unique part of the game: taints. Taints are special personality traits that you can obtain as you play the game. At the beginning of each section, you have three paths to take. Two of them have symbols with corresponding taints, while the third has nothing. Each taint describes actions that will increase your strength and potentially decrease your strength. After you’ve decided which one you want, click on the pedestal of that taint, and that path forward will open up. There are some really interesting bonuses and penalties that affect how you play. For example, the reckless option gives you a rage boost whenever you get wounded. You can also find a taint that increases your strength the more you eat, one that makes you tougher when you have more varied items, or any other number of quirky effects. They take some getting used to, but they do add a clever aspect to the gameplay.

The game has a lot of cool sounding concepts, but I do have one big problem, and that’s the difficulty. I don’t mind hard games, but there’s a limit. I want to feel some sort of progression, or at the very least have fun with it. I can die over and over in a game and not be too annoyed if I’m still having a good time. Unfortunately, Soulblight felt like more of a chore than a fun game. I couldn’t master the combat in a way that the game likely wanted me to, and I didn’t feel like I accomplished much during my playtime. I could get some good hits in and rack up a few kills, but I would also get wrecked by some enemies. Don’t get me wrong, there’s probably some gamers out there that will click with this and love it. There are groups that love challenging themselves with tough, strategic combat that requires you to take into account various other effects. If you can’t play the game in the right way, then you may not have as much fun with it.

Soulblight isn’t the best looking game, but it does have a dark, eerie aesthetic to it, which I liked. The top-down view doesn’t make the enemies look very interesting, which is a shame. Along with that, the game has some very clever uses of injury effects and its tainting mechanic. Unfortunately, those unique aspects aren’t enough to save the game from its frustrating combat and difficulty. There are some gamers who may like the way the game plays, but more casual gamers that just want to have fun might have issues with it. That being said, if you want to take the chance, then go pick a taint, and head into the Sanctuary.

Soulblight is a top-down action roguelike that features simple yet tough combat. The tainting mechanic and injury effects are clever and keep things interesting. Unfortunately, combat is hard to master, and you may end up dying a lot more than you're willing to accept.

Codi loves to play video games and watch movies. He will watch almost any kind of movie just to experience them. His ideas take inspiration from the shows and movies he watches, and games he plays. He also loves a good pun.
Related Articles: Soulblight
Share
Tweet
Share
Submit