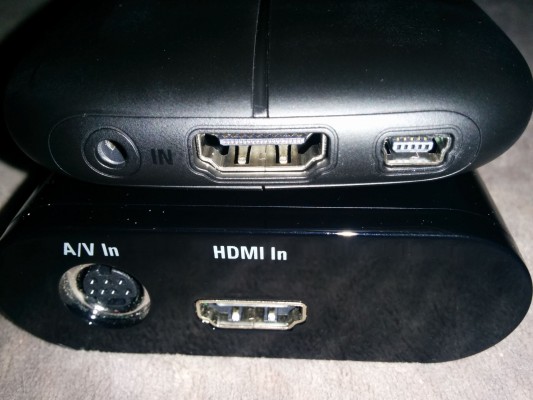 If you read my Elgato Game Capture HD review, you’ll know that I called it simple, powerful, and almost perfect. The system’s small form factor, lack of a tethered power cord, and easy-to-use software made it very easy to recommend, even at the $179 price point. The only hitch I had was that the software wasn’t quite up to snuff. Since there was nothing out there capturing at 60fps, I didn’t even give it a thought.

Elgato was giving it a lot of thought.

With the PlayStation 4 and the Xbox One being more than capable of driving their newest games at 60fps, Elgato went back to the drawing board to shore up their software, drive their hardware harder, and somehow slim down an already-sleek product into something familiar but completely new. Welcome the Game Capture HD60.

Never disrupt the Elgato when they are spooning.

In slimming down the overall profile of the system, the next thing to go was the extra AV cable that came with the original Game Capture HD. This means that this newest device doesn’t capture on the PlayStation 3. While this might sound like a knock against Elgato, this is more of a Sony decision. As they didn’t allow unencrypted HDMI pass-thru, the PlayStation 3 is the culprit in this case. That said, Google has your answer if you want to bypass it – “HDCP decryption on PS3” is your key.

With the chucked AV cable out of the way, the list of what has been added is far bigger than you might think. The first and foremost selling point for the HD60 is right in the name – 60fps. The Elgato Game Capture HD was more than capable of displaying at 1080p and would even pass through at 60fps, but when it came to capturing it, cut that frame rate in half. But here’s the question – as a shoutcaster, YouTube broadcaster, or even a member of the press, why does 60fps matter?

As of June 2014, YouTube supports 1080p at 60fps. They are still rolling it out to us plebeians, but Electronic Arts trailers are getting the royal treatment for now. Other sites like Vimeo, Playwire, Dailymotion, Twitch, and others will inevitably have to shore up their services to match as more users stream from their consoles at these resolutions and frame rates. That isn’t to say that there aren’t alternatives out there for 1080p at 60fps solutions- DarkCrystal, Matrox, Crestron, and others make systems that will capture a raw, uncompressed, and very high speed video stream, albeit at more than five times the price. The HD60 is a “pro-sumer” level device, so I didn’t expect it to be able to withstand uncompressed video.

LEGO Loki is pleased with his dominion over capture devices.

Elgato could have easily pushed this new hardware with a slight upgrade to the old software, but apparently they were thinking about this between hardware revisions as well. The biggest addition here is the ability to now simultaneously stream 1080p at 60fps while also capturing it. There have been times that I’d have liked to capture as well as stream, but was forced to pick just one. The recording will be at 720p at 60fps, but it’s certainly a lot better than the previous output, which was nothing. I’m not sure how much CPU and hard drive thrashing is required to pull these two active video streams, one in and one out, but I heard my laptop fan kick on more than once during capture sessions. You’ll also see it reflected in the refreshed hardware requirements.

Beyond the split capture/stream function, the second feature is one that Elgato is calling Flashback. Similar to software-based capture systems like NVidia’s Shadowplay, users can now click a button and bring up something that already happened while you weren’t recording. You see, the Elgato Game Capture HD60 now functions in a game DVR style function. Never again will you miss that impossible headshot or that crazy juke that happened while you weren’t recording.

If you are going to stream, turn on a light.

The final big update was one that shoutcasters were literally, well, shouting for – separate audio streams. The initial software for the Game Capture HD only featured a single audio source. With the Game Capture HD60, you can plug in a microphone directly and record voice and game audio separately and to separate tracks. This allows for more granular audio levelling – a must-have for any review, preview, or Let’s Play.

It means literally less than nothing, but I’m sure somebody out there will care – the Game Capture HD60 switched up its finish, changing from a fingerprint-attracting shiny finish to a matte black with rounded edges. The original Game Capture HD was pretty light at a scant 5 ounces, but Elgato put this HD60 on a diet, somehow slimming it to just 3.7 ounces. When you are carrying it through airports and trade shows all day, every ounce counts, but for most people’s use, the weight won’t make a difference as it’ll simply sit in their entertainment center or on their desk.

The best thing about the Elgato Game Capture HD60 is that the price point is exactly the same as the original device, even with a massive upgrade in hardware and software. It is literally the best game capture rig on the market, and well within an affordable range for anyone interested in capturing footage at the highest quality without spending five times the price for a device that captures uncompressed and raw. The software remains the only weak spot, but it has been shored up enough to fulfill the needs of anyone but the most hardcore of video aficionados.