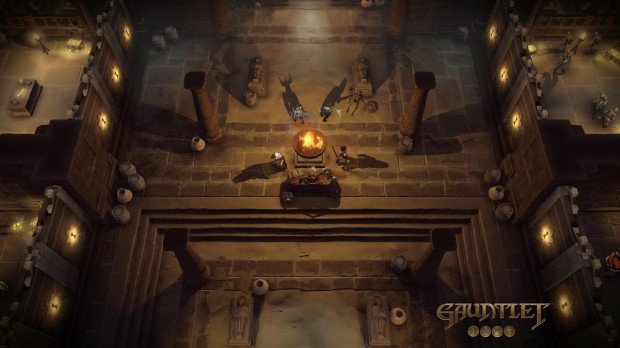 It’s dark. Arcade cabinets light up faces around the entire arcade, sounds occasionally rising above the white noise that consumes the room. Several people are gathered around a Tekken cabinet, waiting for their turn to oust the king of the machine. Pinball flippers and shoes stomping on dance pads, and rising above it all, a single phrase: “Elf needs food badly!’

These are the memories I have of Gauntlet, a series of cooperative dungeon-crawlers that has stretched across generations. Huddled around a single machine or console, four players choose their hero and venture forth for gold, glory and sheer chaos. Does Arrowhead Studio’s take on the Gauntlet formula revitalize that same feeling? The answer is a resounding yes.

The four heroes of the original make a return, each with a new arsenal of weapons and special attacks.

Gauntlet is a modern re-imagining of the original Gauntlet title. Each player can play one of the four roles: Warrior, Valkyrie, Wizard or Elf. The difference from previous Gauntlet entries is that Arrowhead made each role very distinct and different. The Warrior has many different methods of cleaving enemies with his axe, and has his classic spin attack as well. The Valkyrie can use her sword or lance, block incoming attacks with her shield, and her special is a Captain America shield toss. The Elf has a rapid-fire bow, high-damage Sniper Shot, and bombs to keep enemies at bay. Where the diversity really shines, though, is the Wizard; playing like a mage from Magicka or Invoker from Dota 2, the Wizard can combine elements to create a giant arsenal of spells. From a force field to a giant fireball, a good Wizard will likely be key to reaching the top of the leaderboards.

The interplay between the four heroes is fantastic. By having the four players assume four different roles that all support each other, Gauntlet creates moments of cooperative brilliance. Shield-bashing enemies into an Elf’s bomb and freezing enemies with ice to trap them inside a Warrior’s spin attack are just two moments of cooperative mayhem that I encountered in my time with Gauntlet. The game does, however, rank players at the end of the floor in kills and gold earned, so there is still some competition for that last bit of gold at the end of every level. The snarky humor of the series also makes a return, mocking heroes for shooting food upgrades and congratulating the heroes for deeds well done (or sometimes less than well done). Narration from the game’s antagonist and conversations between the heroes keep things fresh, even when some areas can drag on.

The enemies can pile up fast, but they’re only more fodder for fireballs and arrows.

All of the game’s levels are well designed, although progression can become repetitive. Each area is split up into four chapters: three standard chapters, and the fourth chapter containing a boss fight. The normal chapters each have three floors; floor one has a puzzle to find the exit, the second is either a chase scene or a search for the exit, and the third is an arena that must be cleared to get out. The diversity between each floor is great, but the repetition from chapter to chapter can make grinding some of the later levels drag on.

Luckily, the enemy variety keeps things fresh. There are plenty of different enemy types, from giant spiders to necromancers and exploding mummies. The bosses are also challenging, forcing the players to find the boss’ weak spot while holding off both a horde of monsters and the boss itself. The variety in design also comes through in the area design, as each major area is themed in both enemy types and design.

Bosses are challenging, but well-constructed battles that are a blast to play.

The multiplayer interactivity of Gauntlet makes it very entertaining to play with friends, and the cooperative elements are fantastic for couch play. Single-player, however, is a different story. Solo play isn’t very engaging, although the option to play online certainly helps. I’d recommend that anybody who buys this game should probably find at least one other friend who is interested too. Matchmaking is a nice feature, but the lack of in-game voice options means that it still can’t compare to the Gauntlet couch sessions of old without third-party software like Skype or Teamspeak.

All in all, Gauntlet succeeds in both revitalizing the franchise and setting itself as one of the most entertaining co-op dungeon-crawlers on Steam. All four of the classic roles feel fresh and exciting to play as, and the level design and challenges of higher difficulties will keep a gamer group engaged for a while. While the number of areas or heroes is not near the amount of previous games, there is certainly room for DLC in the future, or the implementation of Steam Workshop. If you’re looking for a new game for your group of friends to play this weekend, you’d be hard-pressed to beat Gauntlet.

Few games can come close to creating the same mayhem and excitement as Gauntlet can. While not the game for a lone wolf, Gauntlet is all about friends competing for gold and shooting each others' food. From the new hero designs to the variety of enemies and snarky humor, this is one that co-op fanatics won’t want to miss.