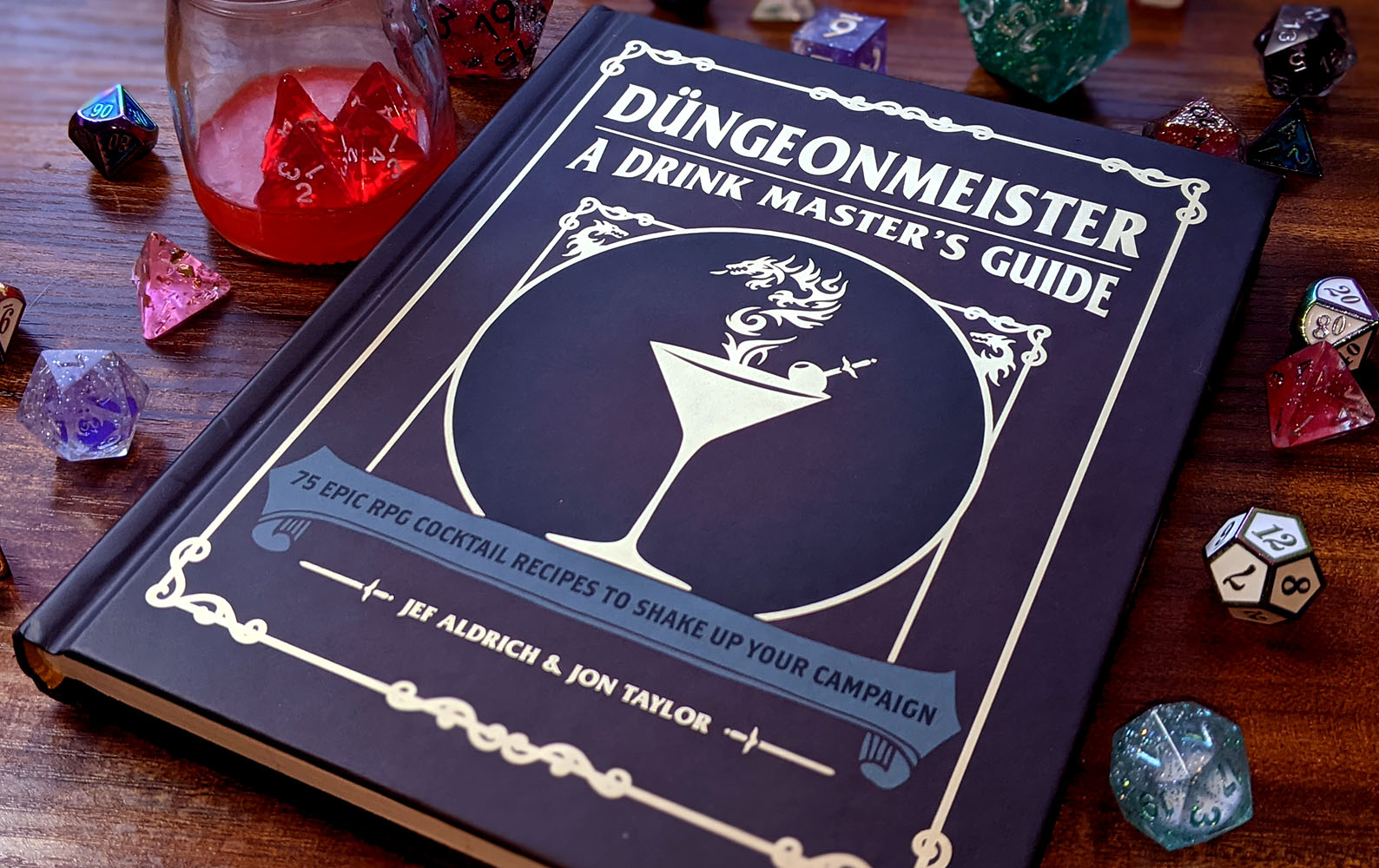 I am a big fan of themed evenings, so few things bring me more joy than having a specialty cocktail to accompany a Dungeons and Dragons session. I’ve dabbled in making my own fandom-themed cocktails in the past, and I always love seeing what concoctions other creative minds dream up. Enter Düngeonmeister: 75 Epic RPG Cocktail Recipes to Shake Up Your Campaign by Jef Aldrich and Jon Taylor. This lovely hardcover book contains 75 Dungeons and Dragons themed cocktails which hope to shake up your campaigns.

The hardcover book itself measures 7.25″ tall and 6.5″ wide with gold accents and a cover that often appears dark blue, but under the right lighting reveals itself to be gray with subtle but lovely red detailing. The presentation is quite nice, and while not overly nerdy, the tribal dragon rising out of a martini glass makes it easy enough to spot without being or seeming out of place among other cocktail books. The scrolling designs on the cover are carried through the book, both as headers and as borders framing artwork of the drink recipes within. 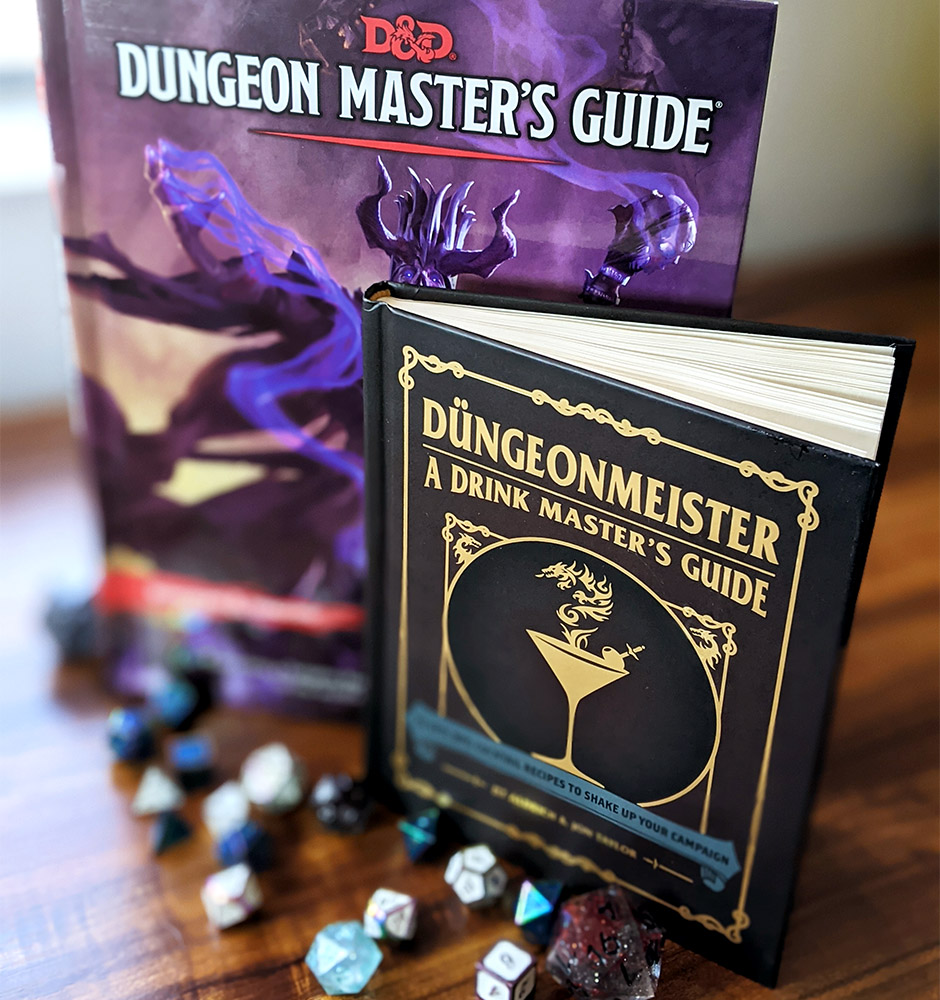 Düngeonmeister opens with a quick introduction to and an explanation of the book before diving into the Tavern Basics; a quick rundown of the different kinds of spirits used in the book, a short guide to mixers, and bar tools you’re likely to use while crafting these cocktails. With that out of the way, the book begins in earnest, with recipes spanning eight different themed chapters, all of which are laced with rather frequent humorous asides.

Drinks range from light and fruity to dangerously strong, and some even include some interesting edible components, including gelatin shots, gummy worms, and pop rocks. Each drink comes with a complexity rating, as well as a yield count. This is a boon as some cocktails are more challenging than others, and some recipes are portioned for a single cocktail, while others are intended to water a whole party. You’ll need to be rather proficient if you want to light a Dwarven Forge (Complexity: 3) on fire using overproof rum, while Goodberries (Complexity: 2) tests your alchemical knowledge by creating your own berry infused simple syrup. Goblin Grenades yields 12 shots, which I sincerely hope you don’t take all on your own, and Never Split the Party Punch makes 6 tall glasses worth of refreshment, while the Rust Monster yields a single, if not powerful, cocktail. 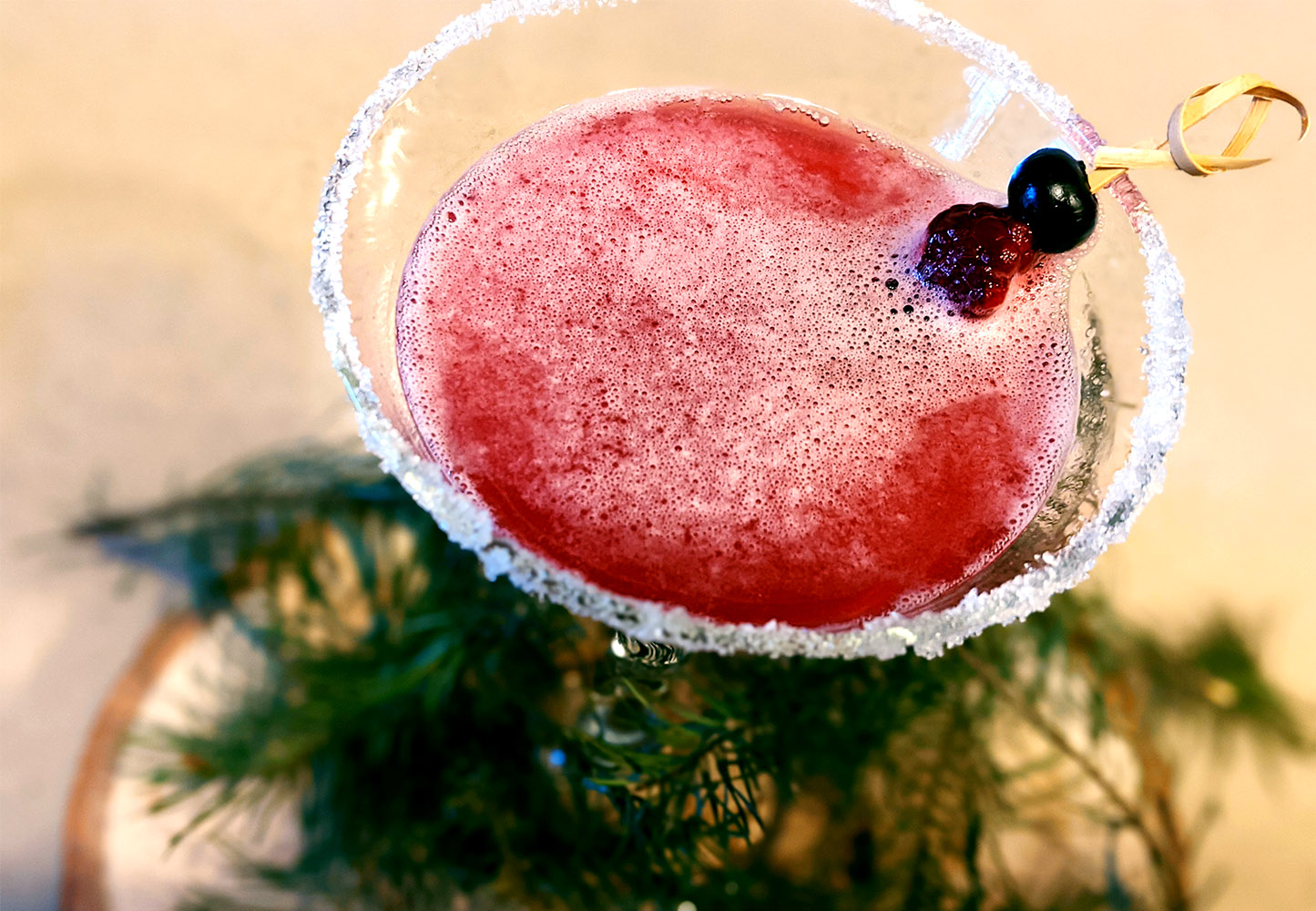 Chapter 1 takes a look at Spirited Species; drinks inspired by the various races of humanoid creatures you’re likely to encounter in the Forgotten Realms and beyond. Things start out strong with drinks such as Three Halflings in a Trenchcoat, (Düngeonmiester Tip: Originally, there were only two halfings in a trench coat, and it was just so they could get into bars and restricted movies) the Dark Elf, an Aasimartini, and my personal favorite, the Half ‘n’ Half-Orc, which is a creative reskinning of the classic grasshopper cocktail.

Chapter 2 covers Class-y Drinks, which celebrates the specialized training of various adventurers. Here you can bask in the elegant glory of a Bard’s Song, check out the ranger’s Flavored Enemy, or try your luck with a Necormancer. I whipped up a Sneak Attack, named after the infamous rogue ability, while playing in Gaming Trend’s streamed Return to the Glory campaign and, ironically, was unable to land a single hit that entire night. The good news is, when I poured myself a Stunning Smite the next week, our paladin was still able to land his hits, so the curse seemed to be short lived. 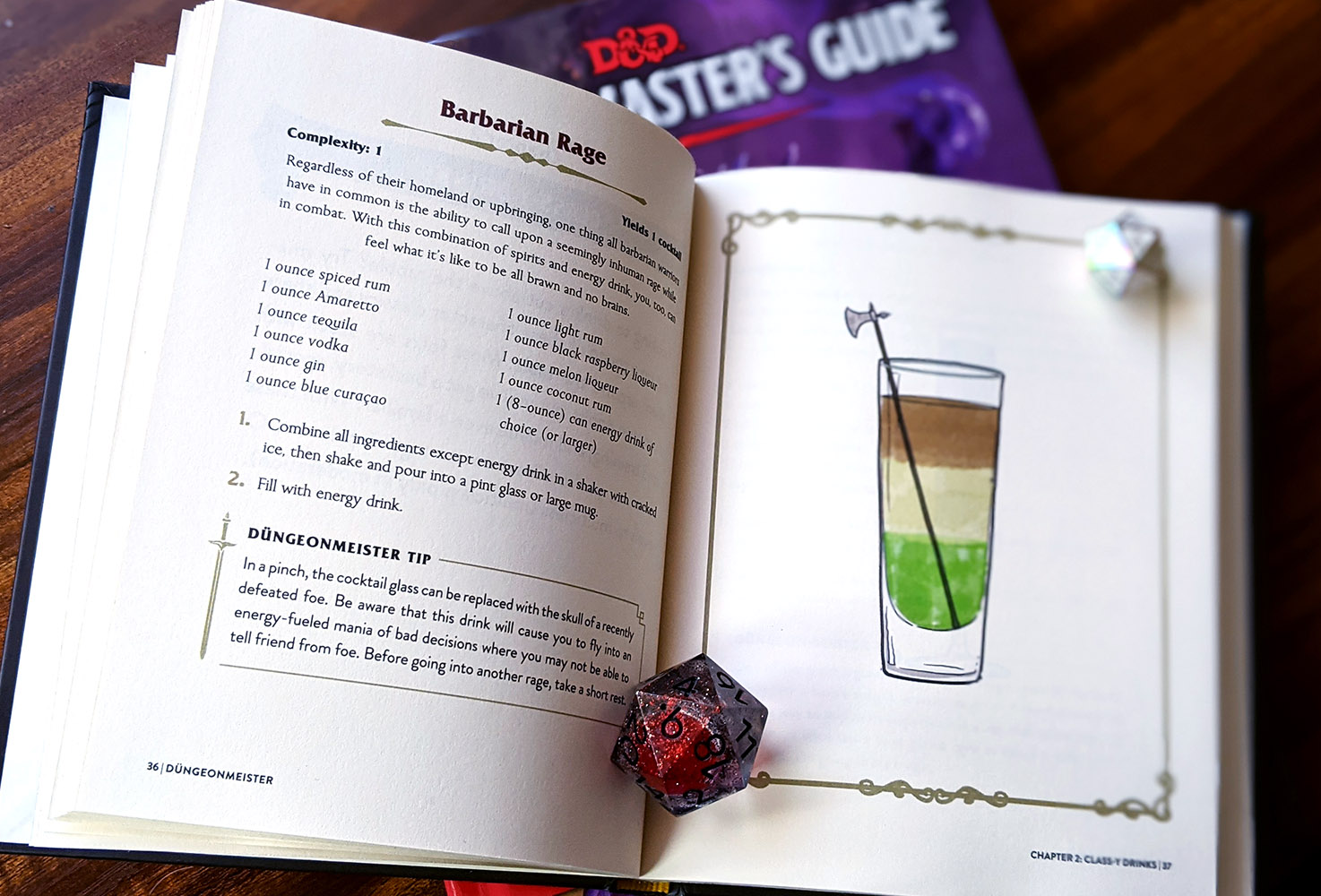 Chapter 3 focuses on Skilled Selections with drinks inspired by non-combat specialties that often come into play. These include the herbal Escape Artist, Seduction Rolls, Royal Diplomacy, and the Stealth Check, an innocuous little concoction which fluoresces under UV light, just as even the stealthiest of rogues can fall victim to a natural 20 perception roll.

The theme for Chapter 4 is Magic Mixers, and the book does warn that the verbal requirement for any spells listed is saying “Wooo!” while you drink it. Here you’ll find a guide for how to create Black, White, Green, Blue, and Mana, create your own Goodberries, as well as cast Faerie Fire. 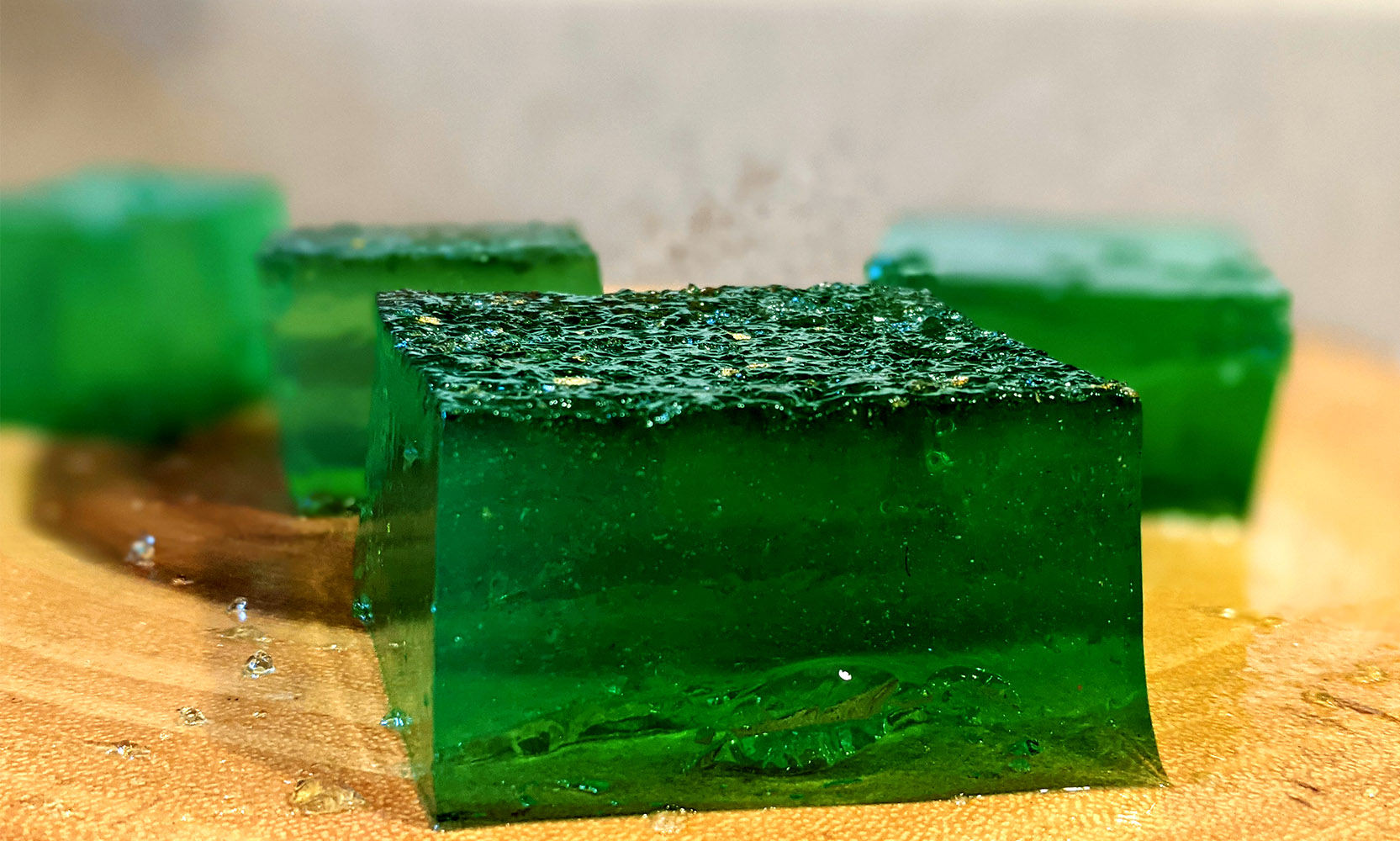 Chapter 5 features Muddled Minions, paying tribute to the various smaller opponents you’re likely to vanquish during your adventures. This chapter includes some of my favorite cocktails, such as Goldschlager-laced Gelatinous Cubes, 1d3 Wandering Minstrels, Troll Slobber, and the Wright Russian. Don’t worry about that last one, he’s probably just upset that his rug is missing, it really tied the room together.

Chapter 6 ups the ante, moving from minions into the more realm of larger and more dangerous monsters with Immense Intoxicants. Can you handle the Breath Weapon, in the form of a martini with a garlic stuffed olive? Or perhaps a Dragon the Beach, a Mai Tyrant, or a Purple Worm is more your style. Worst case, you can always return to the cooling comfort of a Nature Goddess. 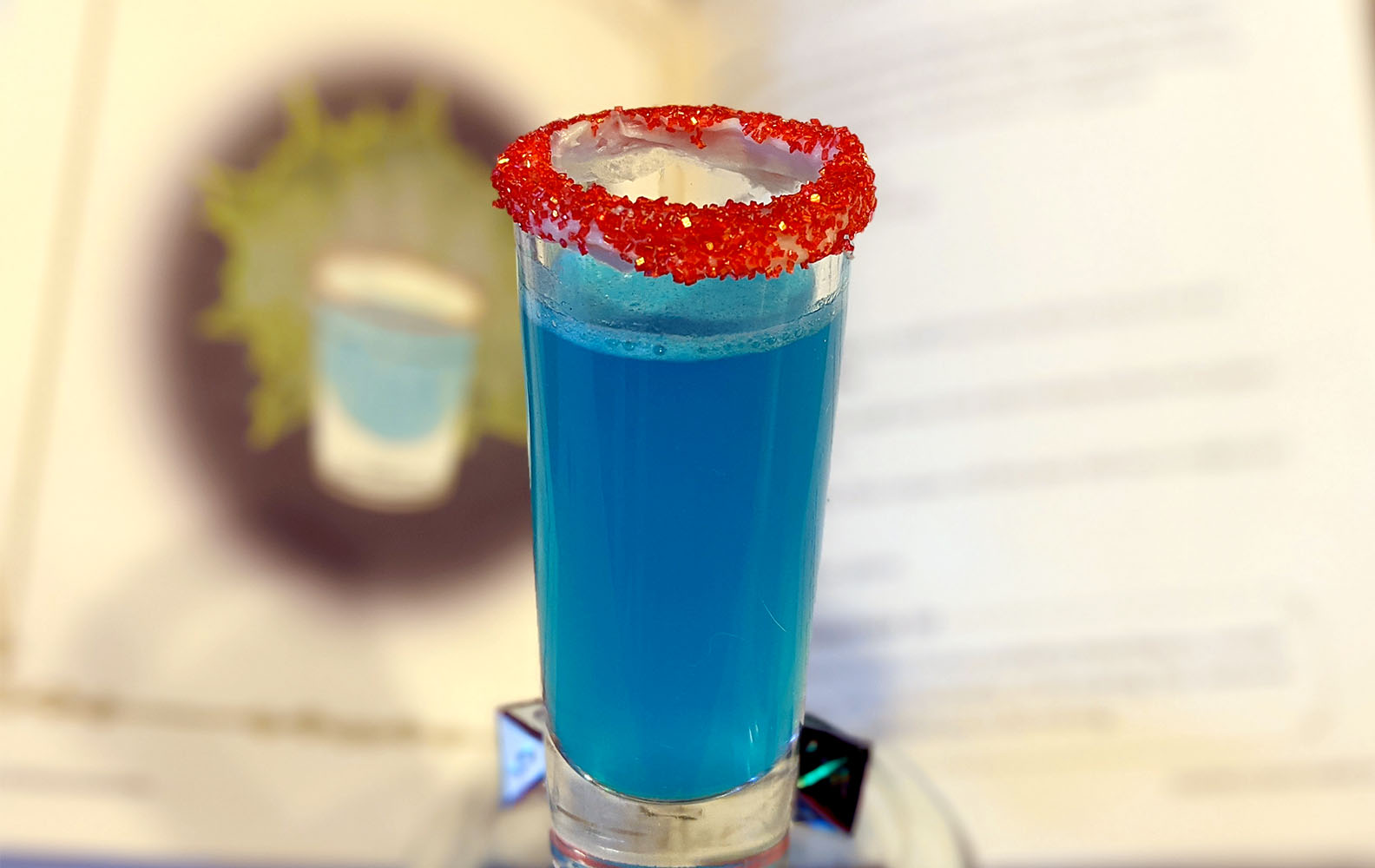 Chapter 7 encourages you to test your D&D knowledge and your DM’s patience with Metagame Madness. Some of the more entertaining cocktail names can be found here, including the chocolatey Fudge the Dice, The Natural 20, The TPK, and my personal favorite, Never Split the Party Punch. Of course, you and your friends could simply settle in for a Session Zero and work out your characters while sharing this beer-based punchbowl cocktail.

Düngeonmeister wraps up by taking a look at Alcoholic Artifacts. Celebrating the fruits of your labors, Chapter 8 allows calls for a boozy way to celebrate the treasures, loot, and magical items your party has acquired along the way. The spicy-sweet Treasure Type J encompasses both the fear of venturing into mortal danger while also savoring the sweet reward that comes after escaping with your life. With that out of the way, celebrate with a Electrum Piece, a Potion of Glibness, a color-changing Epic Upgrade, or a Potion of Strength. 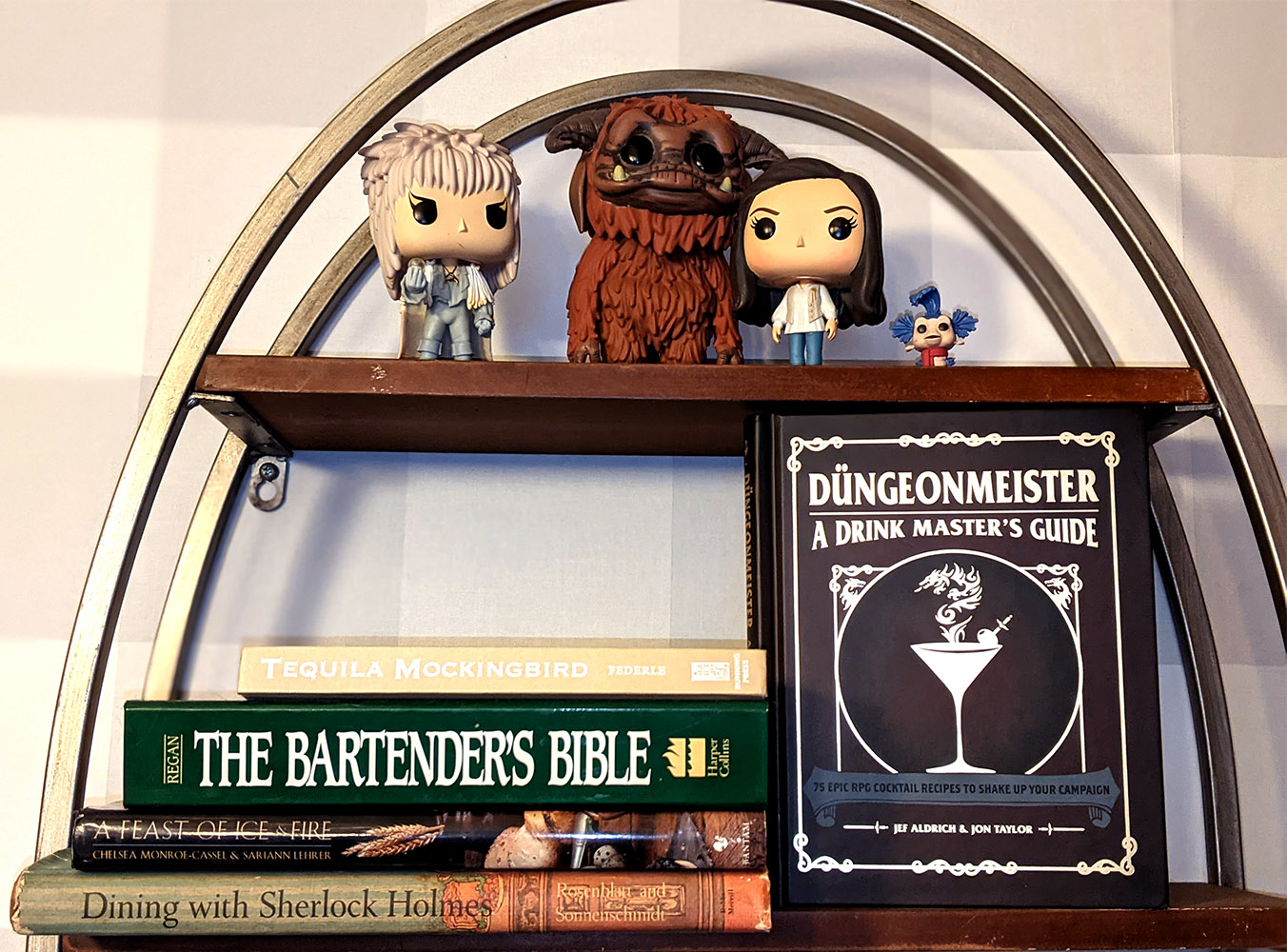 It’s unlikely that any one person will enjoy every single recipe in this book, but that’s not the point. There is enough variety, both in ingredients, flavors, strength of drinks, and complexity that everyone is sure to find something they like. And of course, just like in any good game of D&D, you can always use this as a guideline, a starting point or inspiration to make your own perfect or perfectly flawed improvised cocktail. It’s available on Amazon and sure to make a great stocking stuffer for the tabletop gamer in your life.

Düngeonmeister is a simple but elegant presentation of a fun collection of Dungeons and Dragons themed cocktails, punny names, witty asides, and the promise of delightful adventures alongside good friends. The recipes are diverse in terms of taste and strength that everyone is sure to find something they like, and while it features some flashy and challenging concoctions for those who want to show off, there's plenty that anyone can whip up, even if they can't add their proficiency bonus.