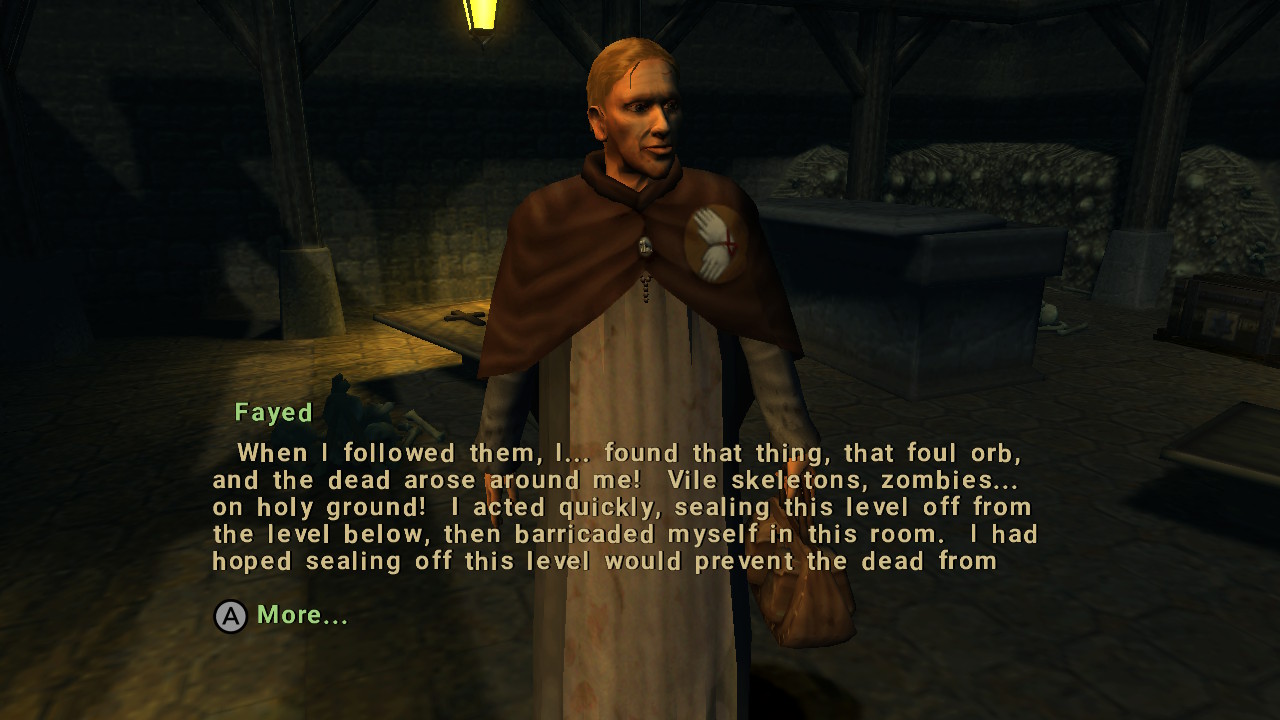 While I haven’t played much of the actual tabletop, I have put innumerable hours into games based on or inspired by Dungeons and Dragons. Most western fantasy games take cues from the many editions, such as The Elder Scrolls or Kingdoms of Amalur, and currently in early access Baldur’s Gate III is essentially a direct translation of 5E. Heck, even Final Fantasy and Dragon Quest were directly influenced by early CRPGs like Wizardry, which in turn was influenced by, you guessed it, D&D. With most AAA games nowadays having RPG elements, you could surmise that, in a way, video games owe their existence to the biggest role playing game. Outside of RPGs though, D&D has dipped its toes into another of my favorite genres: Beat ‘em Ups. I really enjoyed the arcade collection Chronicles of Mystara on Steam, so I was eager to dive right into the PS2 rerelease of Baldur’s Gate: Dark Alliance.

My first impressions aren’t great, in short the game is ugly. I can give it a lot of slack here, being a 2001 PS2 game and not claiming to be a remaster or remake. The problems mainly lay within the color palette, consisting of mostly greys and browns as well as other washed out colors. I assume that, given the time, they were going for “realism” much like the abhorrent jiggle physics on literally the first NPC you interact with, but I digress. The first dungeon serves as a perfect example of what not to do when designing a game in terms of color theory. This initial area is just below a tavern leading to the city’s sewer system paved with grey stone. Your enemies here are grey rats and kobolds, which makes them very difficult to see. Add in some equally grey water with overbearing physics and you’ll be lucky to even see where your character is.

Dark Alliance lets you choose from three characters: a human archer named Vahn, Adrianna the Elven Sorceress, and the Dwarven Fighter Kromlech. Initially, I chose Adrianna on normal difficulty because magic is cool and elves are neat. She only starts with one spell, burning hands, but can learn more as you level up. I got about halfway through the first dungeon before needing to start over on easy for two main reasons: she dies very, very quickly and runs out of magic even quicker. This time I went with Kromlech since the game seems designed around melee combat anyway. That combat doesn’t feel very good to engage with though, less like a PS2 game and more like an N64 game. You simply press A to attack with your currently equipped weapon, but the animation halts all movement, has far too short a range, and simply feels bad. Magic was exactly the same way: stopping you in your tracks and feeling very awkward to use.

Now I’ve played beat ‘em ups where these things being present weren’t a problem, but in those games you could perform different combos or at the very least stun the enemy so they stop attacking you for half a second. Here though, my strategy boiled down to smacking enemies while chugging potions by pressing R to stay alive. This made the game much easier, but it’s still not fun. I tried blocking with ZR, but enemies attack so fast there’s not much point to it. If you’re one of the people who enjoyed this game back in the day please explain to me why this was fun, because I just don’t get it. 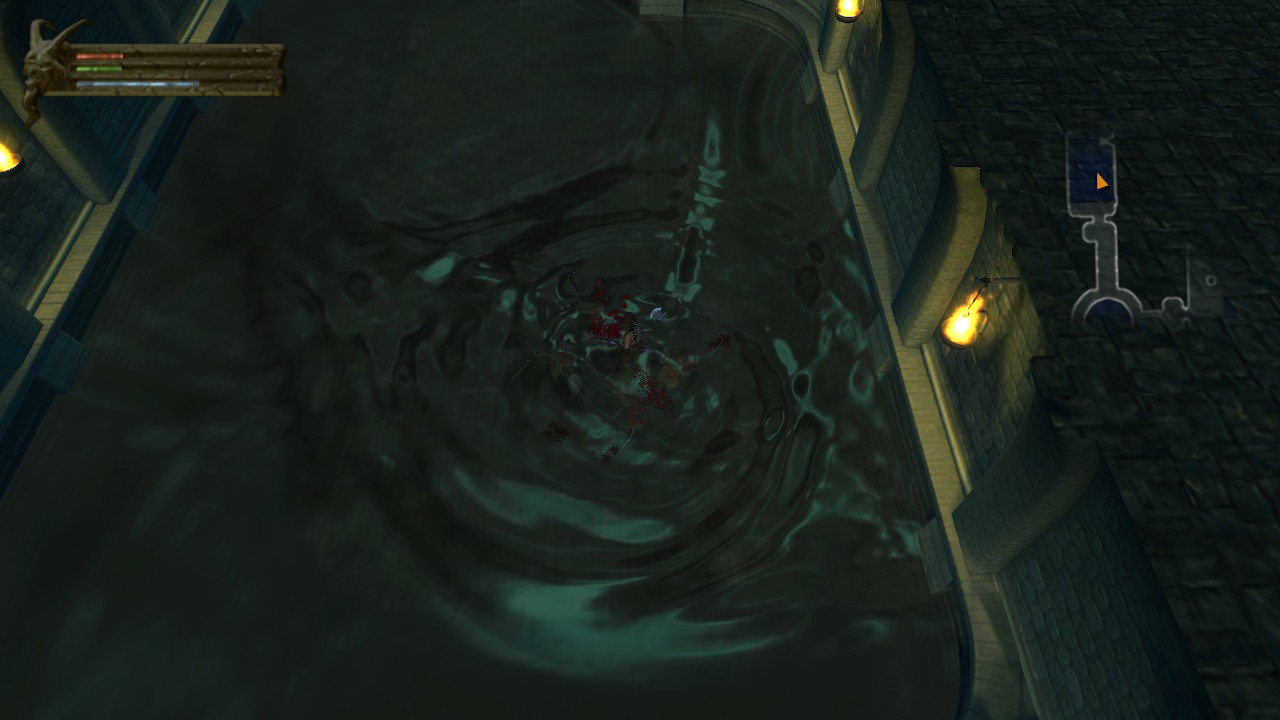 I will, however, say that the voice acting is a standout. It may not be upt to today’s standards, but it’s interesting to hear big name actors like Jenifer Hale earlier in their career. The audio here has also been uncompressed from the original, so it’s crystal clear.

While we’re on a positive note, there’s quite a bit of customization you can do here. While you can’t create a character, you’ll find a metric ton of loot on your adventure like swords, spears, hammers, maces, and armor pieces. Every weapon has their own set of attacks and it’s fun to see what all of them can do. I eventually settled on sword and shield, but it’s nice to know I can switch up my playstyle any time I wish.

As you progress through the game, you’ll discover new areas, gain experience, and level up. Each dungeon has a shortcut back to town, which is nice but there’s not much to do there. When you level up, however, you can add a point to a skill and sometimes even one of your stats. The functions of these skills vary wildly, from granting you a new spell to just boosting your max HP a bit. In my short time with the sorceress, I felt like I could really change up her playstyle, but with the fighter that breadth of customization was much more narrow. If you’re playing this game in co-op (local only, there is no online which is a bummer), be aware that some members of your party won’t have many options in this factor of customization.

Baldur’s Gate: Dark Alliance has sadly not held up for a modern audience. If you already enjoyed the game, then this is a decent port to current hardware. For everyone else, the game is clunky, drab, and boring.

David is the kind of person to wear his heart on his sleeve. He can find positives in anything, like this is a person who loved Star Fox Zero to death. You’ll see him playing all kinds of games: AAAs, Indies, game jam games, games of all genres, and writing about them! Here. On this website. When not writing or playing games, you can find David making music, games, or enjoying a good book. David’s favorite games include NieR: Automata, Mother 3, and Gravity Rush.
Related Articles: Baldur's Gate: Dark Alliance
Share
Tweet
Share
Submit