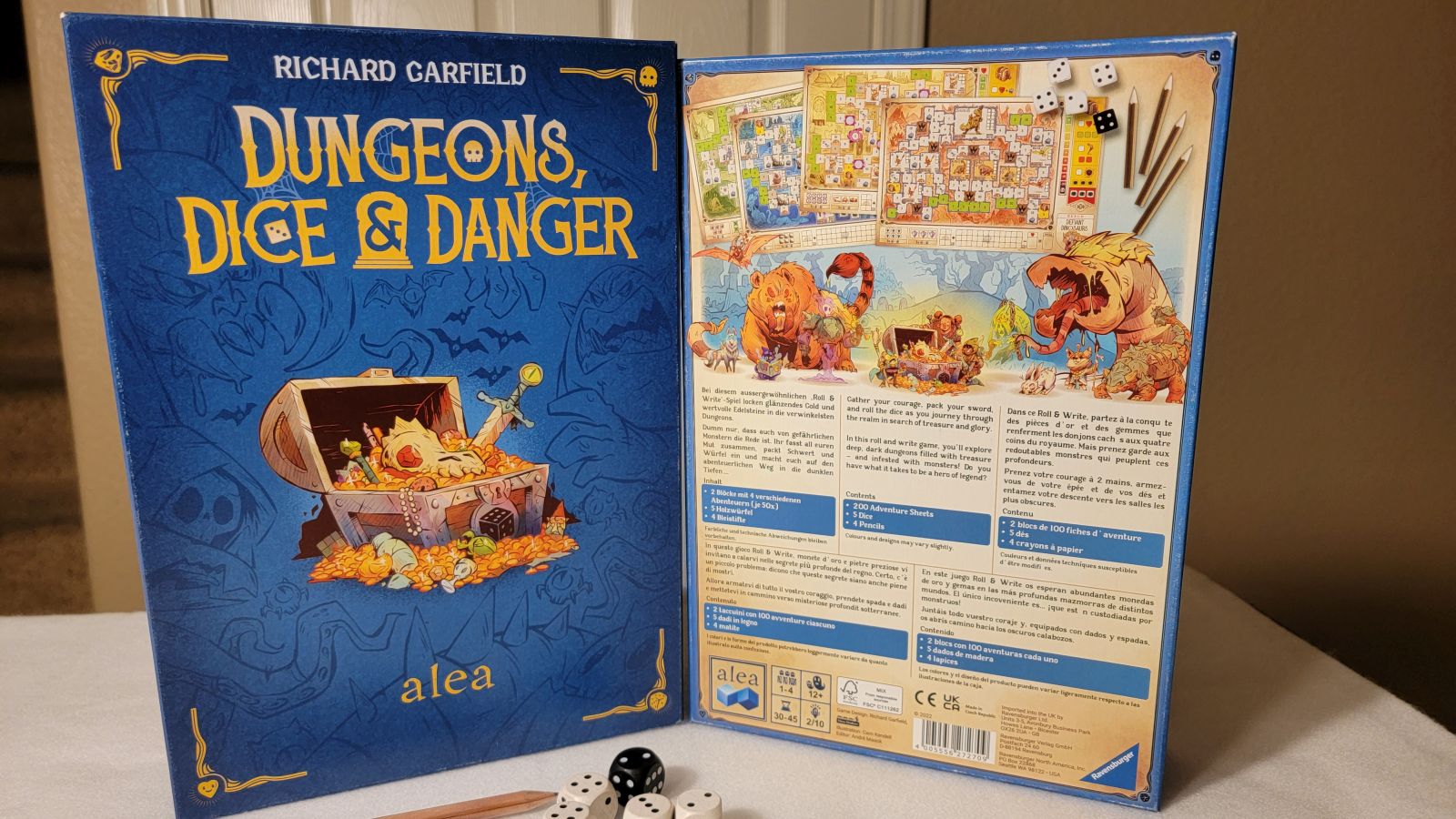 Ah Dungeons Dice and Danger – a roll and write game. The proverbial game/gift that keeps on giving and giving and giving. Many games are ticketed as too much to play at one time, or having too many pieces, or too few pieces, or not enough strategy. Well, the roll and write genre certainly aims to turn the board game industry on its head and bring back a strategy I was taught way back in the days of childhood during elementary school: KISS. Keep It Simple Stupid was something that was stressed a ton and while some roll and writes have depth and complexity that does not seem so simple, it is in fact more simple than your typical board game to learn and offers immeasurable replayability.

The roll and write genre has been abuzz recently due to board gamers wanting the depth of a heavy game packed into something smaller and neater with less moving parts. This also means most roll and writes have a smaller box and lower profile in a collection, which are welcome changes. That being said, some roll and writes suffer from being a bit too long and too heavy and rolling, yes that is a pun, and become just another heavy game. 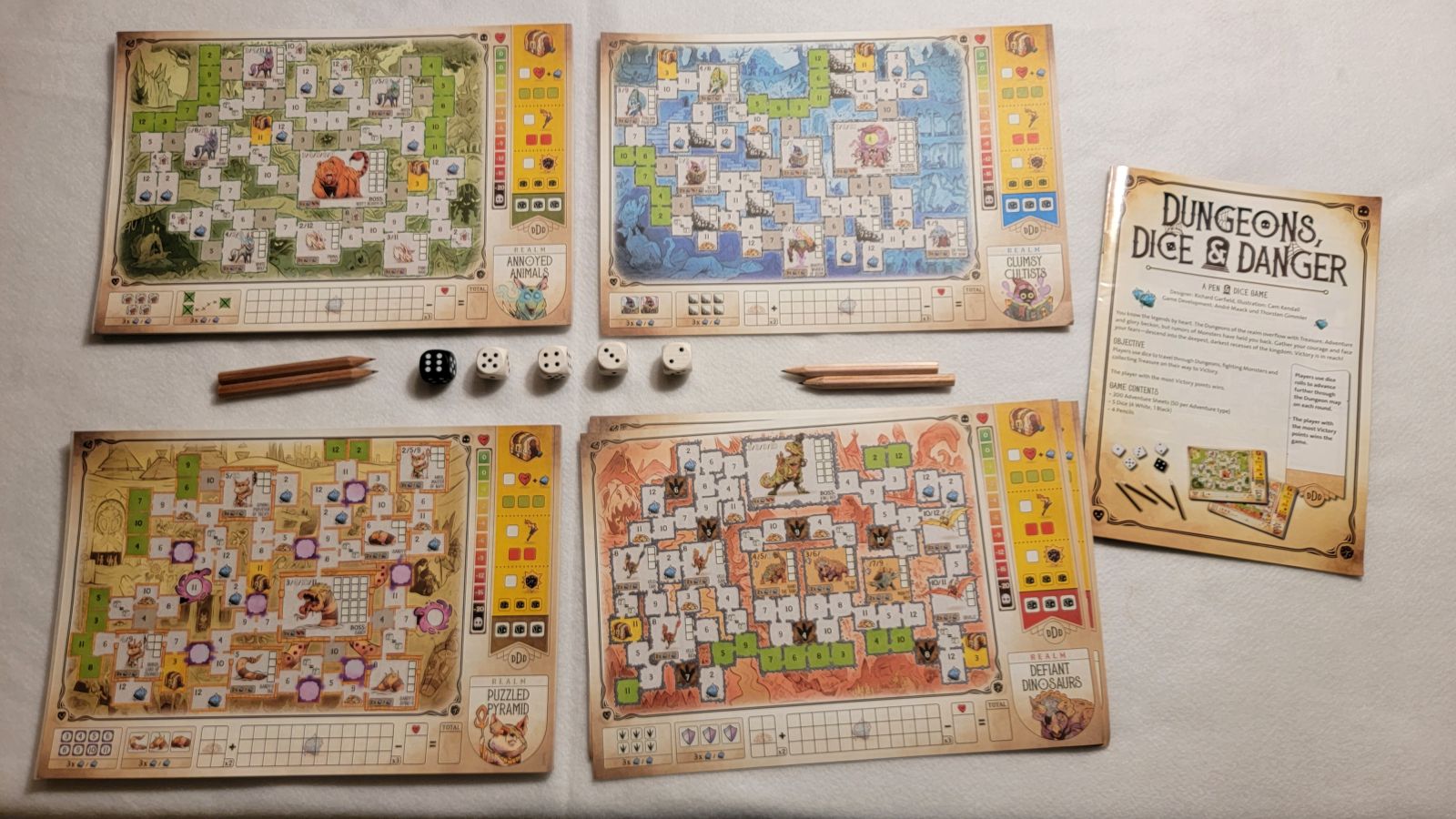 Dungeons, Dice, and Danger has the distinct pleasure of hitting all of the different aspects of being a roll and write really well and not looking back. Designed by Richard Garfield, yes Richard Garfield of Magic the Gathering fame, and produced by Ravensburger Dungeons, Dice, and Danger has a standard to meet – and it does so. The contents first and foremost are simple and provide the easiest setup that almost any game can offer. There are four maps to choose from, everyone plays on the same map, and everyone gets a pencil then you are ready to play.

A game of Dungeons, Dice, and Danger takes place over many rounds and continues until one of the players kills all of the monsters in the dungeon. The main mechanic of the game involves the active player rolling the five dice, and then all players use the dice to make two pairs of dice to give them two numbers. Players then take those numbers and cross out squares on their maps that they have access to. At the start of the game, the only spaces accessible by players are the green starter squares. After starter squares have been crossed off, it opens a few more squares up, all of which lead to bosses, gems, treasures, and/or map special spaces(different for each map). 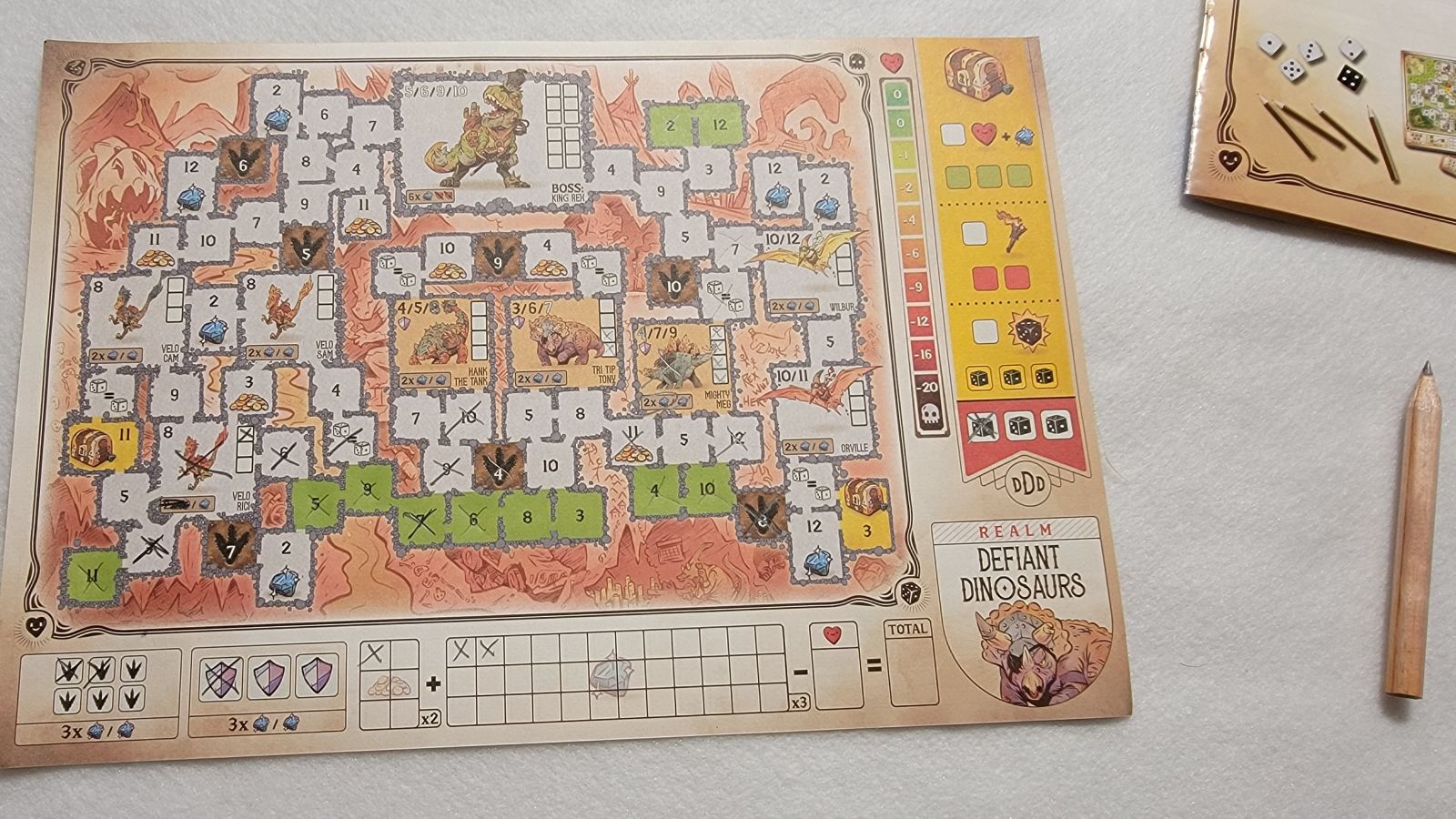 Much like making a pair to roll the dice, monsters in the dungeon require certain numbers to do damage to them. The numbers are either indicated as filled in or not filled in. If the numbers are not filled in, players will have to visit spaces surrounding the monsters to activate those numbers for monsters. Once players kill monsters, they gain gems based on whether they killed the monster before or after other players. Play continues like this until all the monsters have been slain or all players die.

Dead players, you say? Yes, dead players. In Dungeons, Dice, and Danger players who cannot place a number in a given turn must cross off one of the health boxes on the side of the map. It is here that players who take further damage will also start gaining increasingly more negative points. If players however go too far and take too much damage, they will die and are out of the game; this thankfully does not happen much. As players keep rolling and crossing out squares, the game draws closer to the end and when the game does end players count up the amount of gems they have acquired throughout the game and potential other points, depending on the map, then subtract any points from health lost. When this is all said and done the player with the most points is the winner. 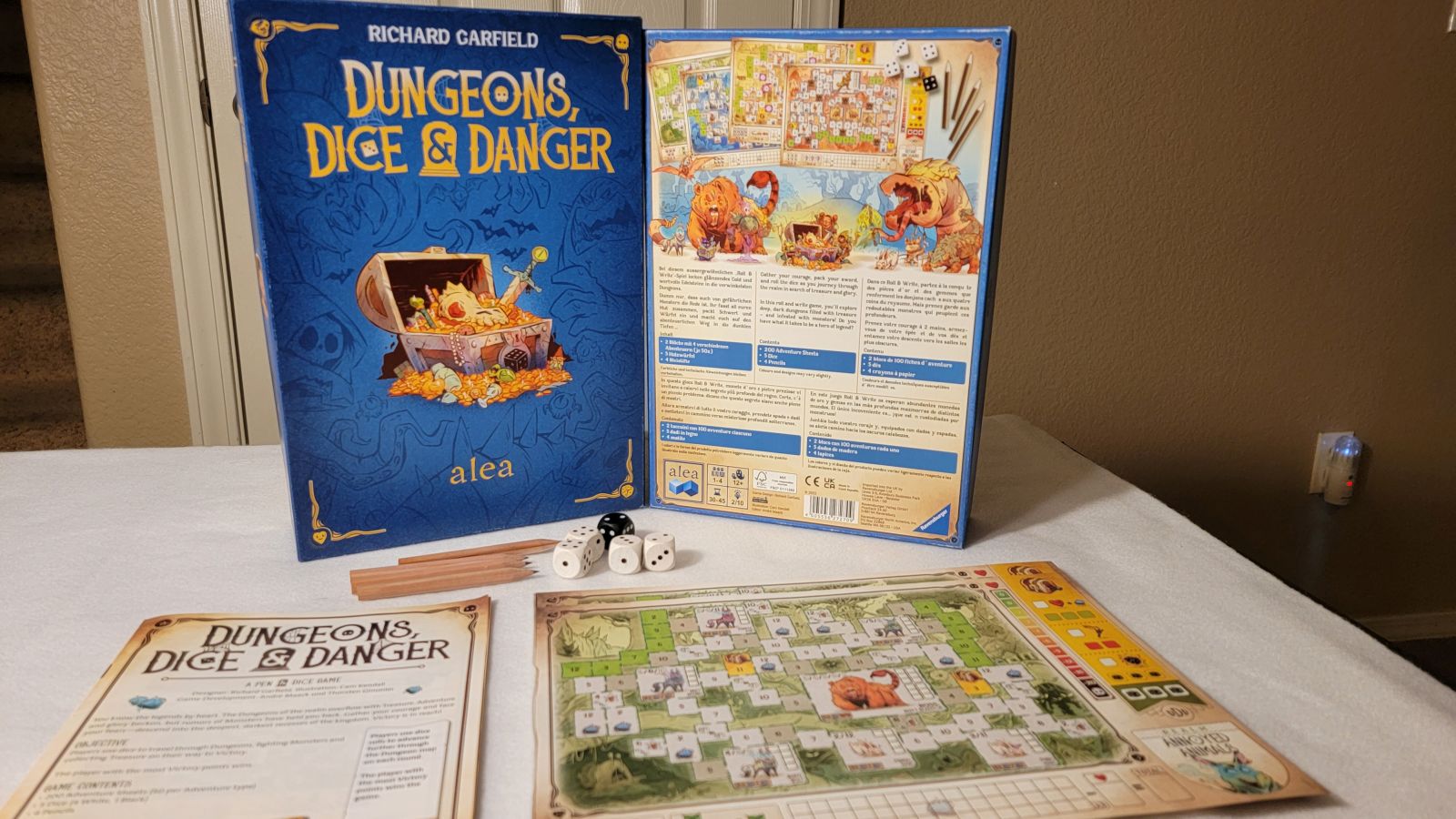 So Dungeons, Dice, and Danger is a great roll and write that presents a decent level of strategy and difficulty. The strategy lies within knowing which numbers to use first and which will allow you to keep exploring in order to not take damage. With the games being highly variable based on rolls made by players and the variety of maps available,, you can rest assured that most games will not be the same. Game time is nice and short, coming in around an hour, serving as a solid experience without going on too long.

This does and could potentially lead to some burnout if you play too many games. Aside from this the rules need some clarification for sure, and rather than include multiple different language rulebooks, they could all be put in one book. Interestingly, pads of paper were chosen for the game instead of what could have been dry erase maps, since the game only plays up to four players and there are only four maps.