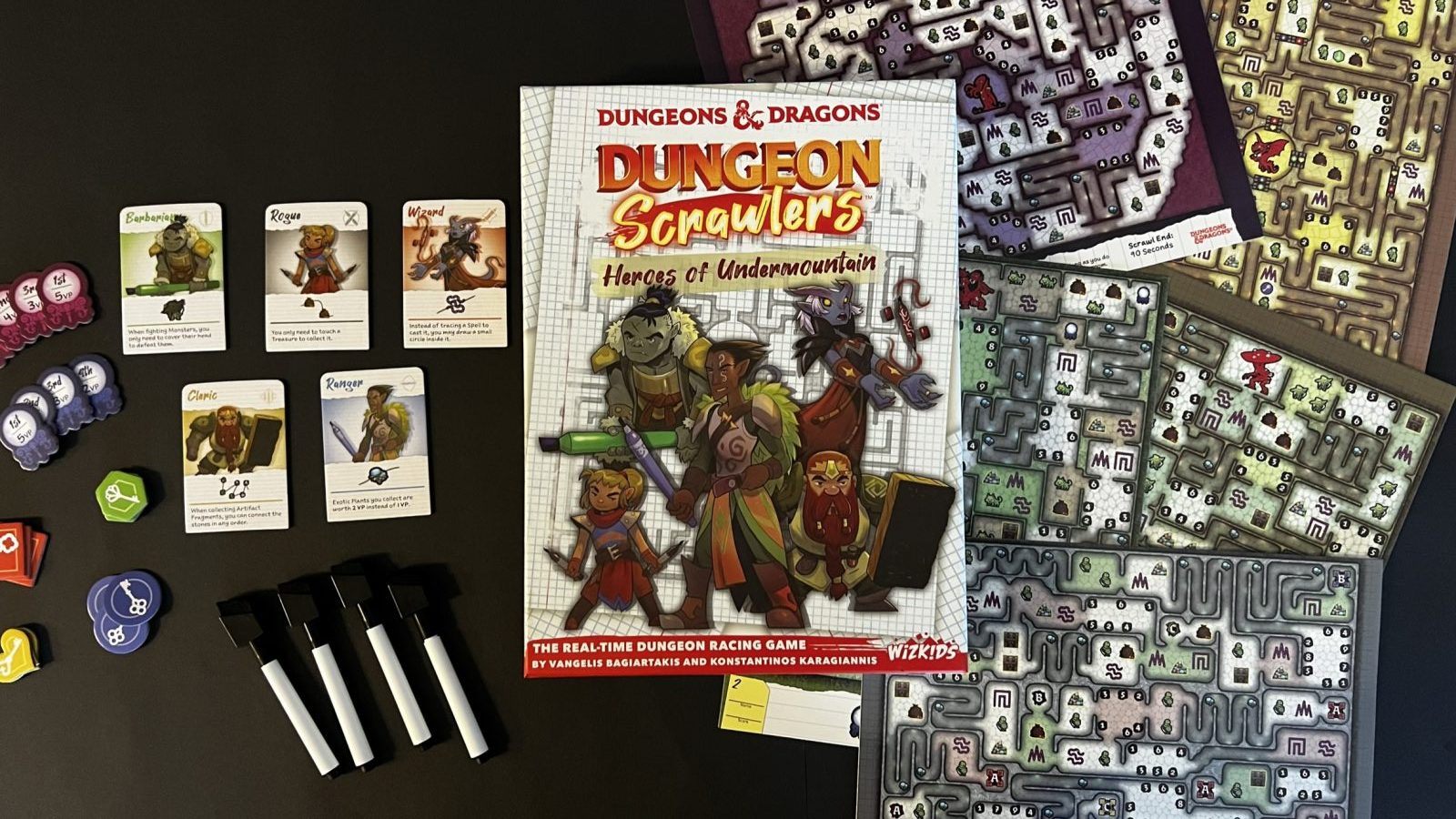 Seeing the Dungeons and Dragons logo on a box invokes specific feelings and thoughts. For me, I imagine a group of friends sitting around a table with different colored dice, some miniatures strewn around a map, and a dungeon master animatedly describing the story at the end of the table while everyone else soaks it all in. What I wasn’t expecting with this game was epic races that pitted grown men’s drawing abilities against each other. 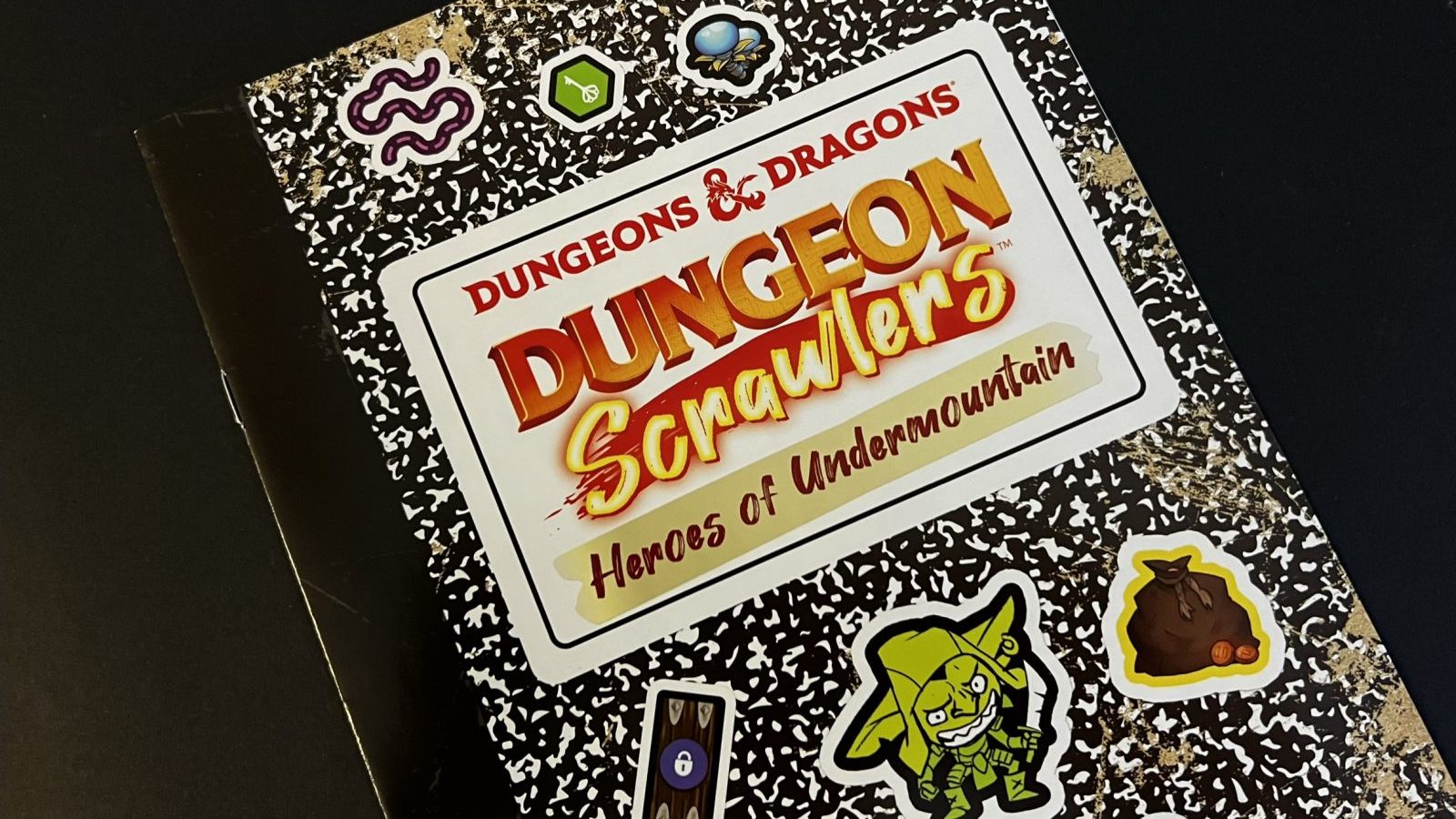 Dungeon Scrawlers: Heroes of the Undermountain (2021) is a licensed Dungeons and Dragons game for 2-4 players distributed by WizKids and designed by Vangelis Bagiartakis, of Kitchen Rush fame, and Konstantino Karagiannis. In Dungeon Scrawlers, players are racing through a dungeon maze with a marker and interacting with the elements of each room to earn points. The scrawler who makes it to the dungeon boss and defeats it first ends the round and the scrawler with the most points after three dungeons is the winner. 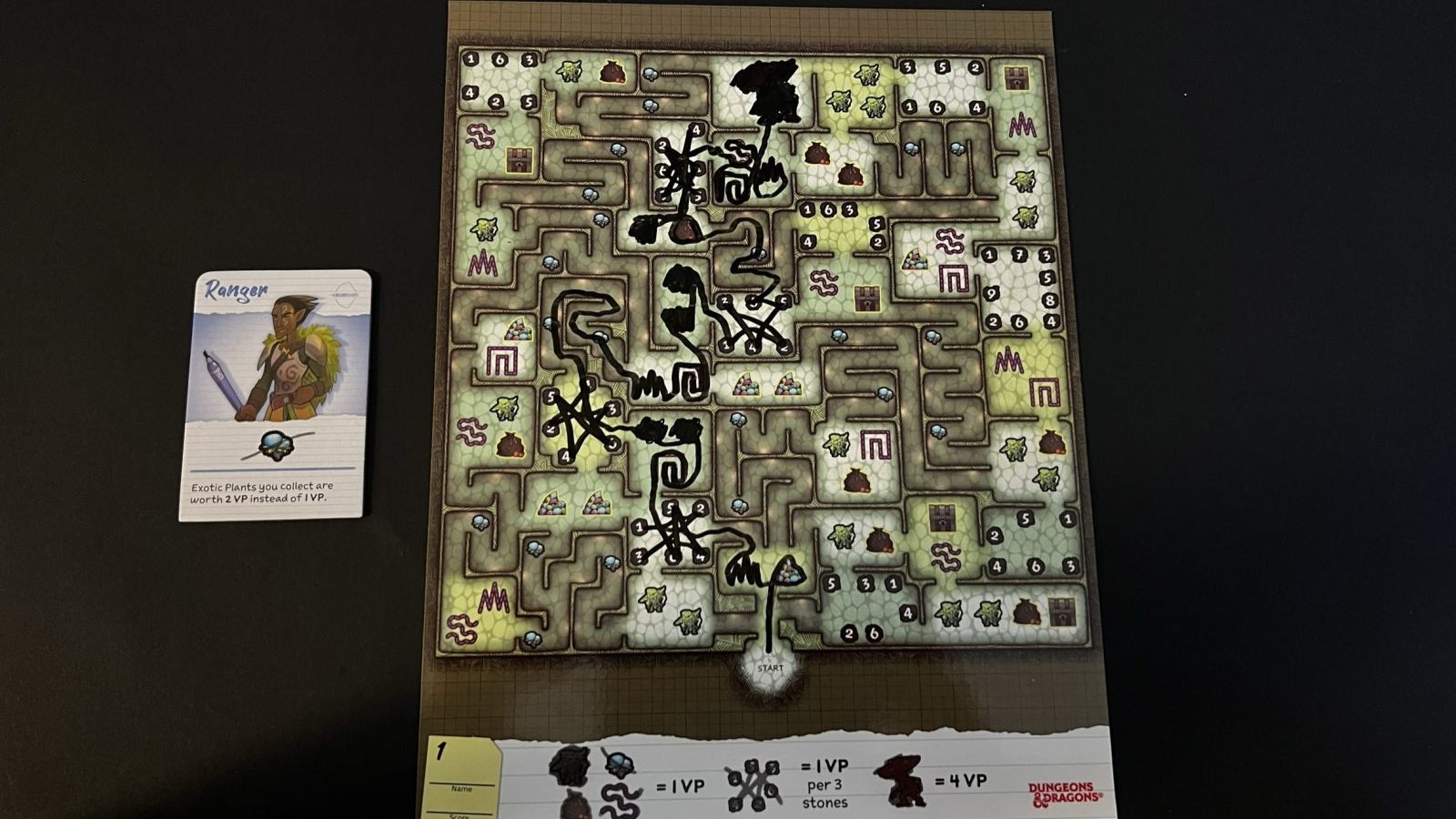 At the start of the game, the players choose three dungeons to explore out of the eight provided. Dungeon 1 is considered an introduction and then each set of three going forward get progressively more intricate and difficult. A round has all players starting at the entrance and keeping their markers on the boards at all times as they set off in the dungeon. In the rooms, different elements pose different drawing challenges. Monsters must be completely drawn over, spells cause the player to draw over unique shapes, treasures must be outlined, exotic plants just need to be drawn through, and artifact fragments must be picked up in a specific order. The dungeon boss must be completely drawn over like other monsters, but the creature is much larger. 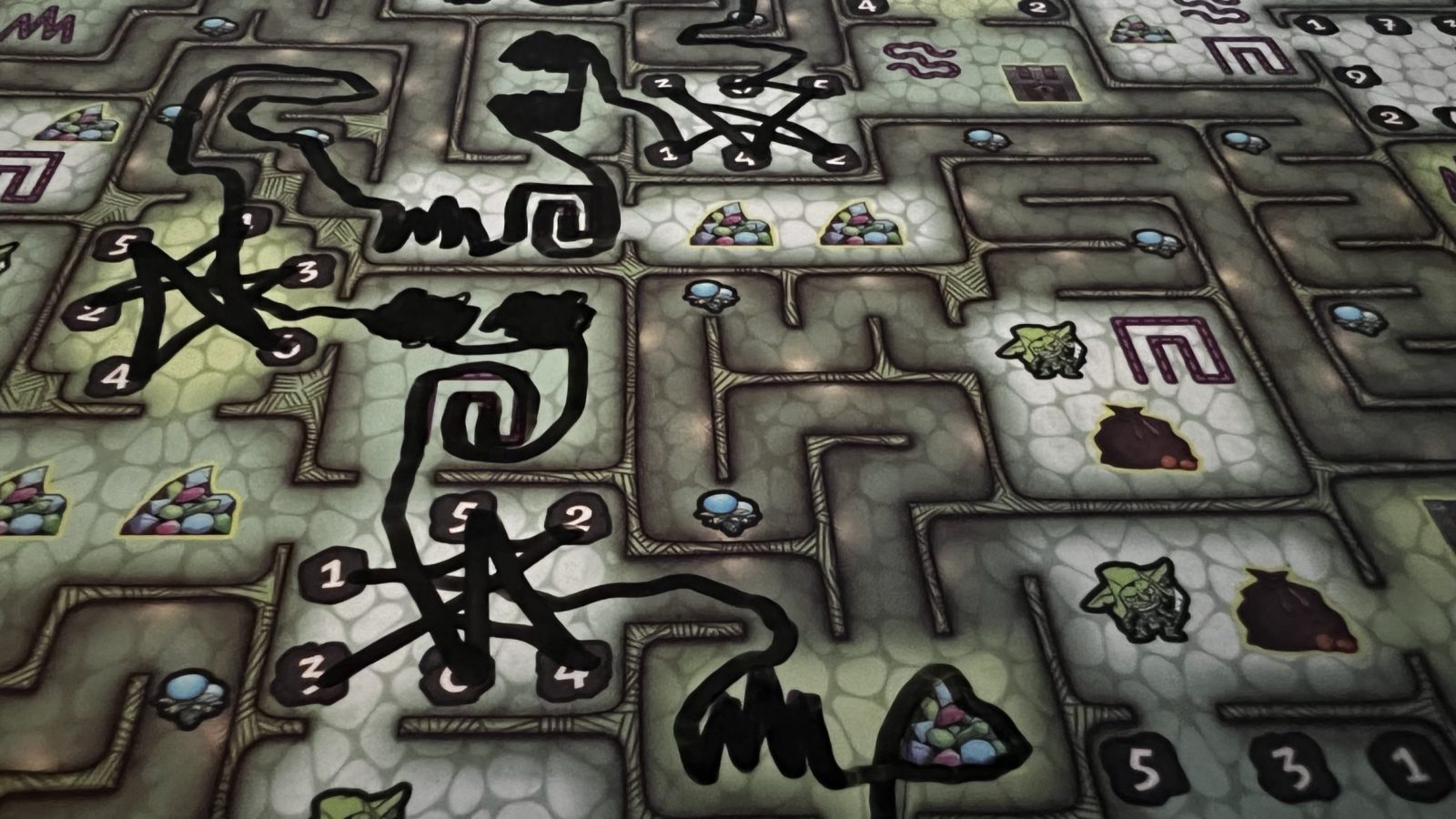 As the dungeons get more complicated, new elements are introduced. Orbs offer variable scoring based on who fills in the blue or pink orbs first. The first player gets the most points and each player in succession gets fewer and fewer points. Portals allow players to transport their marker to a different location on the board and some dungeons even provide an escape portal to end the round in an alternate way. Some areas of the dungeon can be locked. Once a player finds the key, they must grab on the key tokens from the center of the table before they are allowed to progress into those areas. With only three keys provided, they become a hot commodity in four player games. In some dungeons, you can also rescue prisoners that grant you points as well. Scoring at the end of each round is done by another player in the group. Points are awarded for completing room elements and points are lost if an element is skipped or if a player draws their marker through a wall. After all three dungeons have been completed, players will add their scores together for their final total. 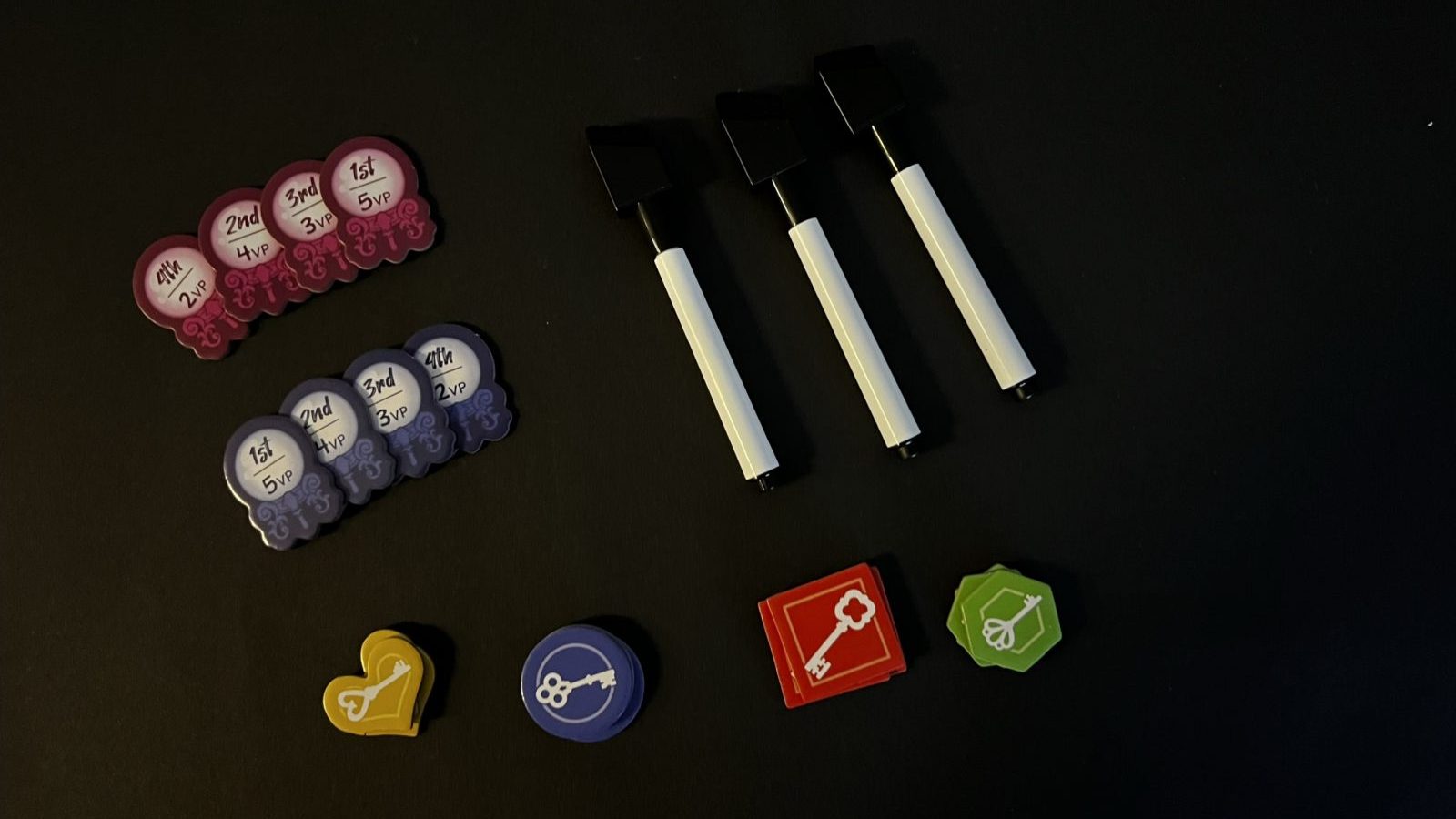 At the start of the game, each player is assigned a different character class that grants them a special ability when navigating the dungeons. 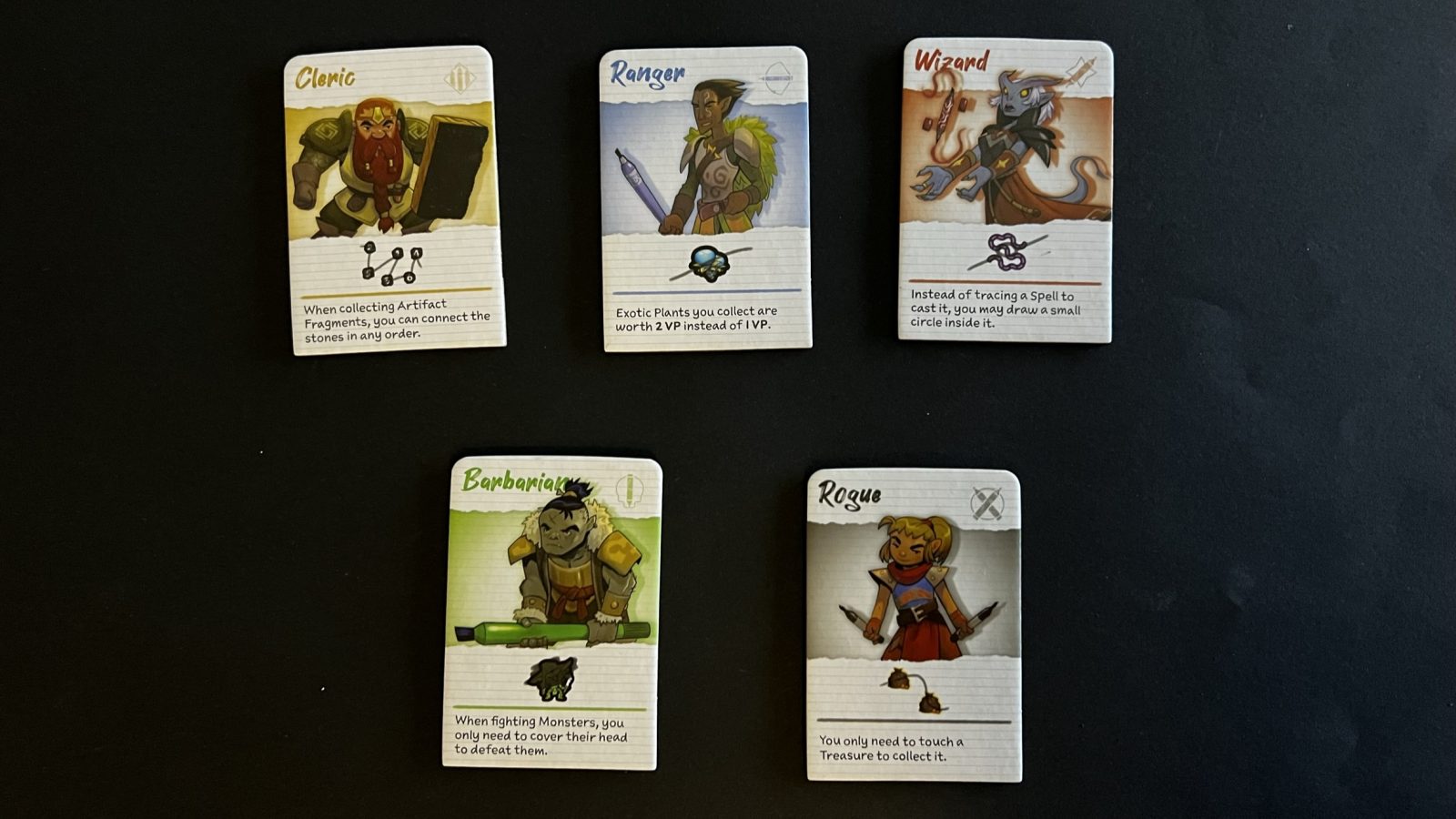 The game includes 5 mats per player with the 10 dungeons printed on either side, a marker for each player, cardboard character cards, and cardboard tokens for specific dungeon elements. The artwork definitely portrays this as a game aimed at kids. The rulebook resembles an old composition notebook with stickers plastered to the front and the monsters are less menacing than they are cute. The aesthetic still fits the Dungeons and Dragons world and invites the players to a fun experience. The rulebook is well laid out and the game is easy to teach and learn. The iconography on the board makes it easy to distinguish the dungeon element types. The components of the game are high quality, with the only drawback being the boards being a little thin. 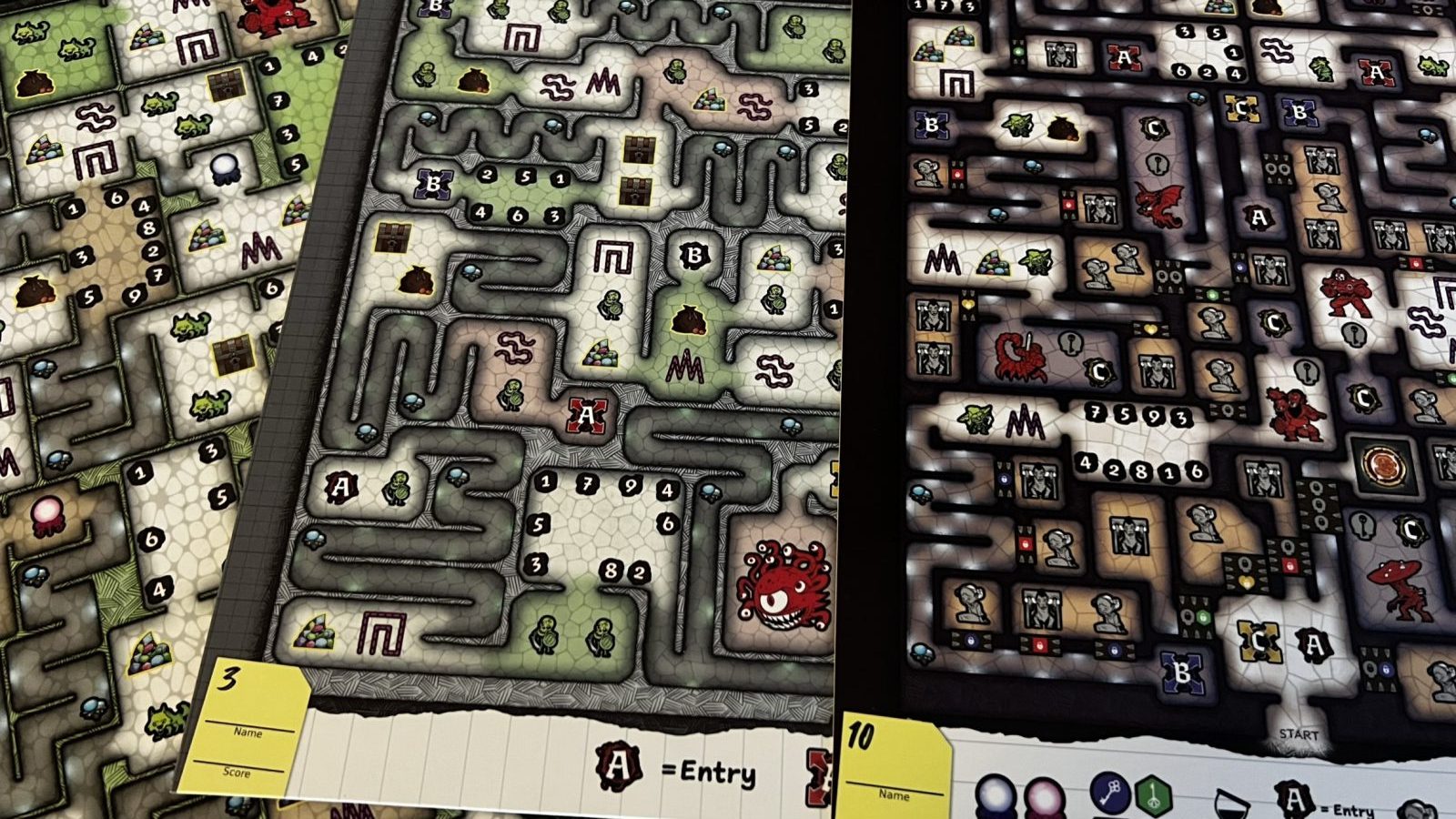 The gameplay of Dungeon Scrawlers is surprisingly fun for both kids and adults. The kids I played with were much more meticulous about getting every single point they could along the way and only picked up the racing sense of urgency when I ended the round way sooner than they expected. The adults I played with got way more competitive with the game than I expected. People were watching other boards and trying to get points in while being the first to slay the dungeon boss. The higher numbered boards were surprisingly challenging as keys disappeared off the table and strategies had to change. The 10-15 minutes play time makes this an easy starter or filler game for adults and I can see it getting even better after a few adult beverages have been imbibed. At the end of the day, as the game is aimed at kids, I can see them pulling this one off the shelf more often than the older crowd.

Dungeon Scrawlers is a fast paced drawing/racing game set in the world of Dungeons and Dragons. The quick play time, fun strategy, and great looking artwork makes this a fun filler game for adult game night and one your kids will enjoy.