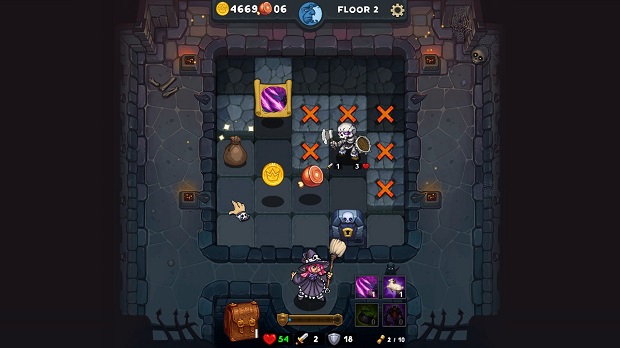 Dungelot: Shattered Lands is a fun little game that doesn’t take itself too seriously, yet at the same time manages to pack some wicked challenges. It’s highly enjoyable, slightly irritating, and probably deserves a spot in your library.

Both Dungelot and Dungelot 2 were only released on Android and iOS, but Shattered Lands made its way to PC. It takes the core mechanic of the original games, formatting a roguelike dungeon crawler in the style of Minesweeper, and adds some depth and polish.

The game opens in a tutorial dungeon, where the rules and the meters you need to keep track of are explained. You have health points, armor points, morale, and a hunger meter to worry about. The dungeons have varying amounts of floors and levels of difficulty, but you’re not technically required to kill every monster or beat every challenge you encounter. All you need to progress is the golden key hidden on each floor.

Once you complete the tutorial, you’re treated to the backstory of the world you’re about to explore, Pangeus. The inhabitants all used to live in peace and harmony, mining mana from the depths of the earth to power their cities. However, the mana extraction went unregulated for too long, and soon everyone was bleeding the planet dry. As a result, Pangeus broke apart into three separate continents where chaos reigns.

It’s your job to travel the three continents and defeat some of the more hideous monsters terrorizing the land. There are six dungeons in each area, five with mini-bosses and one with a final boss. You’ll discover several unique monster types with their own strengths, weaknesses, and characteristics. The further you go, the harder they get.

This little bat will be the least of your concerns.

Thankfully, progress means a chance for you to get stronger too. Dungeons offer new weapons, crafting blueprints, and even permanent stat boosts as loot. Later on, you can also use the gold you earn from exploring dungeons to purchase weapons, armor, and character upgrades.

There are four characters – a paladin, a vampire, a witch, and a bard – but only the paladin is playable at the start. As you make your way through each act of the game, you can unlock them. The differences in their stats, spells, and personalities add some replayability.

Even the cursors for each character are different.

Another way this game keeps things fresh is through randomized floors and sporadic encounters. There are shops and mini-games mixed in between the standard dungeon floors, so you can spend the coins you’ve earned or test your skills for prizes or perks. Because I’m good at memory games, I’ve been able to remember the correct notes for the singing skull challenge every time, earning hundreds of coins in the process.

The encounters felt very much like tabletop gaming. Do you want to listen to this traveling band? Do you want to take your chances and explore that mysterious cave? Rarely does a prompt always have the same outcome, so if you’re feeling risky you can give it a go, but most of the time you have the option to ignore it if you need to conserve your resources or protect your HP.

Dungelot: Shattered Lands is that all too familiar mix of frustrating and addictive, especially as the amount of dungeon floors begins to increase. To a certain extent, you can start to intuitively figure out the best patterns for uncovering squares and develop strategies, but there’s always some element of surprise present. I would say this game balances skill and luck very well.

This floor gave me a bit of a hard time.

Though there’s some exposition and world-building at the beginning, overall I feel like the story is a little thin. Each of the characters has about a paragraph of backstory, but none of them are particularly inspiring or related to each other: the vampire is a pacifist that subsists on cow blood, the witch is super smart, and the bard got locked up for political performances. There’s just enough detail to get by, but not enough to create much interest.

Even the occasional back-and-forth exchanges between characters are fairly flimsy. This begs the question: why include much of a story at all? If there’s a story in a game, I want it to be something compelling that I care about. Dungelot: Shattered Lands is already enough as a quirky dungeon crawler I can click through and casually enjoy. Its sense of humor is amusing, but it’s not enough to buoy the more serious sections.

All this said, the lack of story is easy to overlook when you’re concentrating on working your way through each dungeon. Having to retry the same 30 floors over and over gets tiring, but there’s a sweet satisfaction waiting at the end when you finally conquer them and earn your reward.

Dungelot: Shattered Lands is a fun combination of Minesweeper and a dungeon crawler that you’ll surely keep coming back to. While not without its moments of frustration, overall this game rewards you for skill more than it ruins you with bad luck. What it lacks in story it makes up for in its variety of creatures, items, challenges, and treasures.

Sarah Marchant is an office admin for a nerdy t-shirt company. She has a soft spot for indie games, a passion for story-driven titles, and a weakness for cooking games and anything with zombies.
Related Articles: Dungelot: Shattered Lands
Share
Tweet
Share
Submit