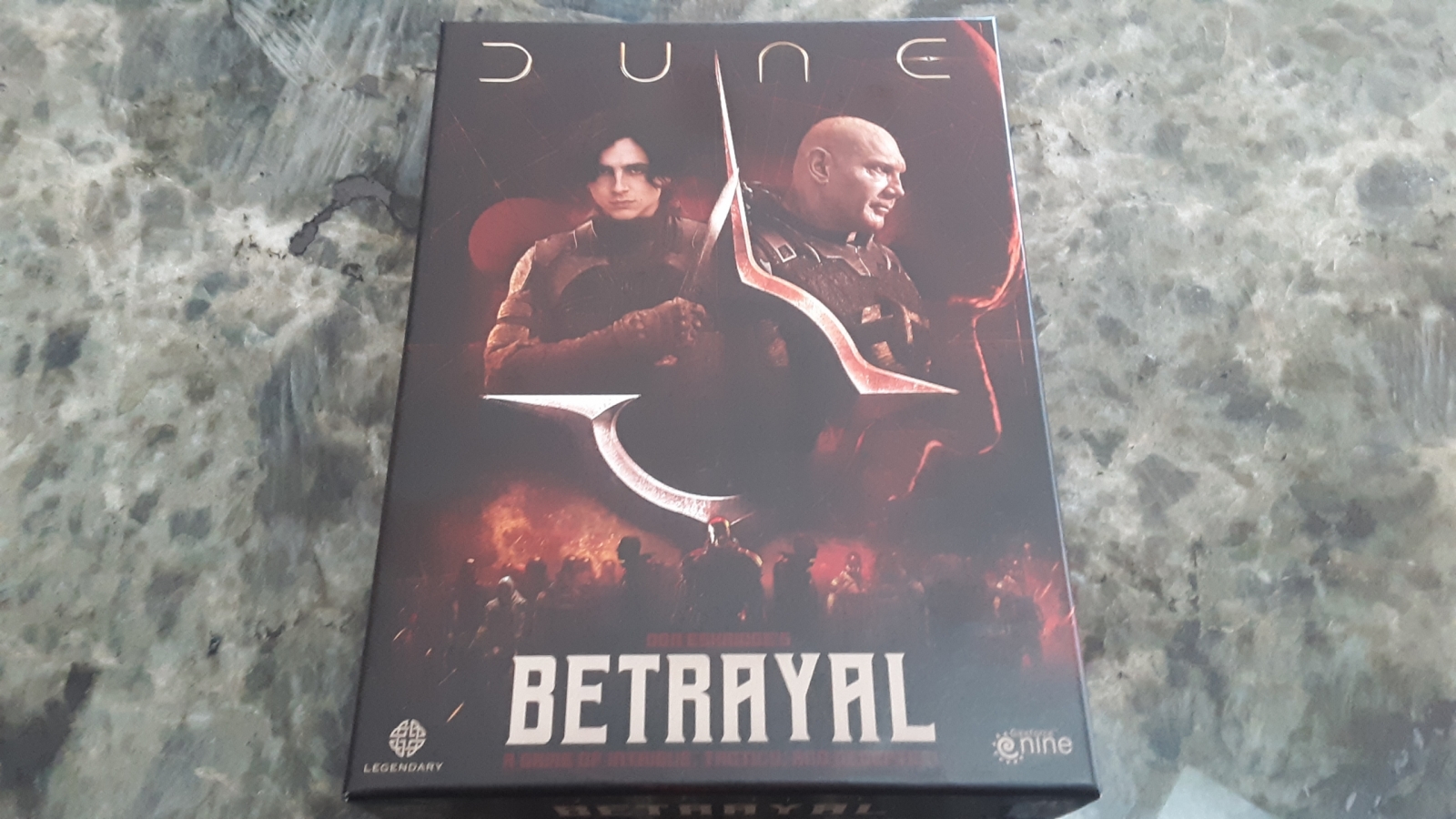 I watch an absurd amount of cooking competition shows. Since the focus of most of these is on how the cooks deal with adversity, one of the most common tropes is some series of events conspiring to put one of the contestants behind the eight ball, needing to do too much with not enough time left. Overwhelmingly, this results in the judges praising the flavors and ideas behind the dish, but taking issue with the food being raw or undercooked. That’s how I feel about Dune: Betrayal; there are some really good and interesting ideas here that really needed some more time in the oven.

While Betrayal bills itself as a social deduction game, very little of the deduction is social, since the mechanics make deducing at least half of the players’ identities trivial. Games start with each player receiving an identity card, denoting them as either Atreides or Harkonnen, and whether they are a fighter or a noble. Afterwards, they shuffle two face-down trait cards, nobles presenting as both houses, while fighters simply have their house and fighter. Harkonnen nobles secretly learn who their fighters are, and play advances to the action rounds.

So at least one player already has perfect information about at least one other, but the cards introduced in the action rounds exacerbate this issue. Starting with the dealer, players select one card from three available options until each player has selected three. These cards come in five suits, which will score if they match the player’s house or noble/fighter role, with the fifth scoring for everyone. The actions themselves have a wide array of effects, with the most common allowing a player to view one of another player’s traits. Since fighters’ traits match their identities, and you don’t know which of your two trait cards was just seen, it feels suboptimal to try to bluff as a fighter, as your identity can be discovered rather easily. 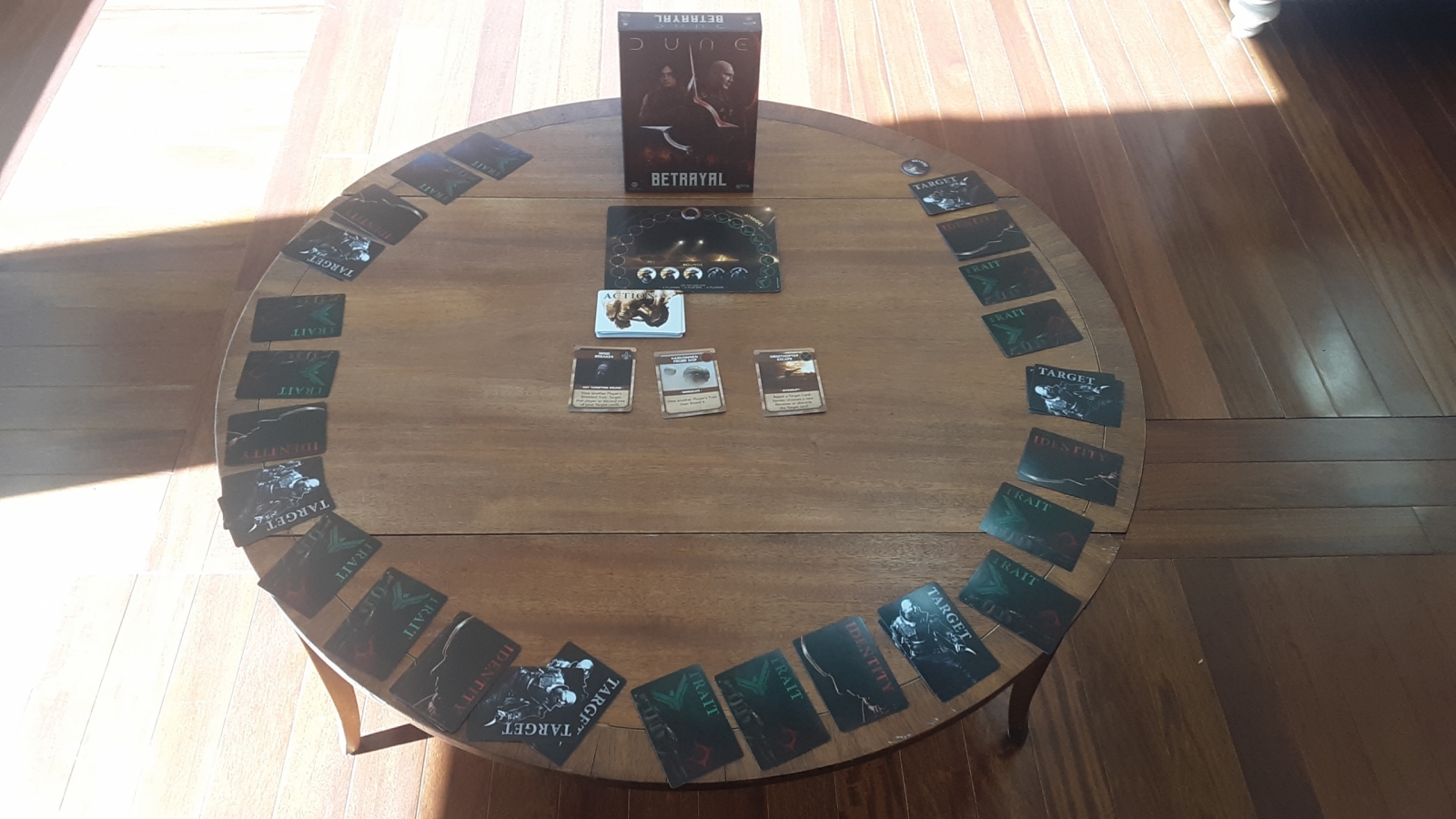 If fighters are playing a game where everyone knows their identities, and deciding how to interact with them is a matter of pure math, nobles are playing the opposite end of the spectrum, where their identities are totally secret, and other players have to use their gut instincts and try to read them. Since both houses’ nobles have the same trait cards, and the house-affiliated action cards are the more useful ones anyways, there is pretty much no mechanical means to suss out their identities, and none of the nobles particularly want to be open about who they are, due to how the targeting rounds work.

The targeting round is where the great and unique ideas Betrayal contains really come out. Once again, starting with the dealer, each player will play either their attack or defend card face down on another player for two rounds, with some added wrinkles. Defend cards simply give the recipient an extra point, but attack cards are negative two per card for Atreides nobles, negative one per card for Harkonnen nobles, and only negative one no matter how many for fighters. On top of that, a player can only be targeted three times, so if you’re sure you know a noble is yours, your team can stock them up with defenses so the other house can’t attack them. I love this mechanic, and fervently wish it wasn’t overshadowed by all the issues this game has.

If the targeting round is where the genius shines through, it’s also where you start getting cut by the rough edges. There’s some action cards that come into play during targeting rounds, mostly letting players give each other tokens which will alter their score similar to how the targeting cards work, but since fighters are usually outed by this point, they’re just safe and easy targets for these. And the cool interplay between defend and attack cards? Since that all starts with the dealer, even if a player gets a good read on a noble, they can easily just get filled up with target cards before there’s a chance to act on it. The dealer is just de facto first player the entire game with first pick of action cards and freedom to target whoever they want, which ends up feeling inordinately powerful. 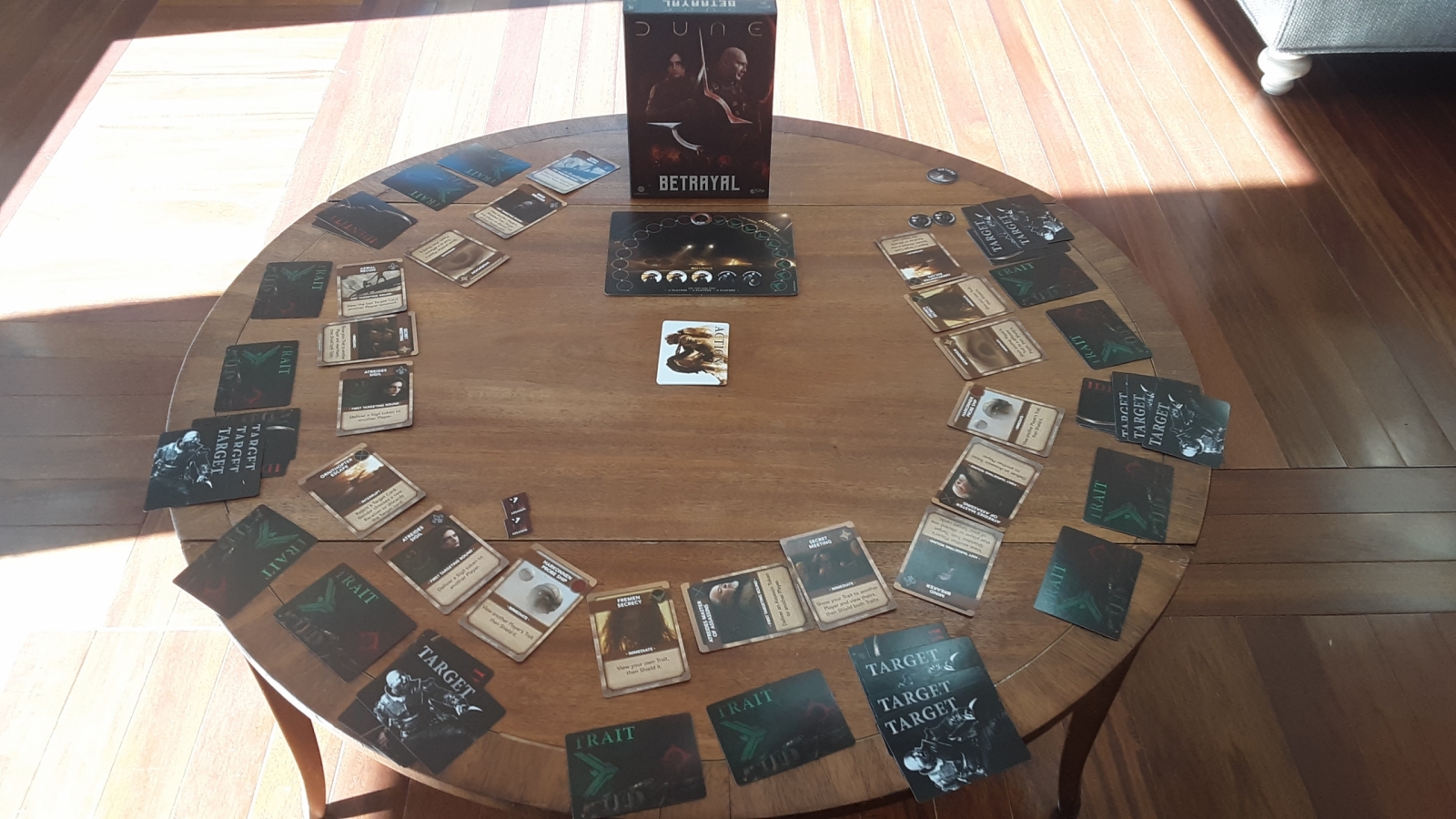 There’s just so many problems with this box that could have been solved by more playtesting and thought that I was left feeling like I played a game that was half-finished and rushed to release in concert with the movie. The track used for final scoring sometimes doesn’t have enough room on it if you score multiple points for one house in a row. Some cards have additional rules that aren’t printed on the card, despite there being plenty of room for them to do so. Speaking about the cards, they are possibly the thinnest cards I have ever played with, and showed wear after one play. Don’t get me wrong, I appreciate cheap games, but flimsy and worn secret identities can really mess with a social deduction game. Finally, because of the strength of the dealer position, there are some games where the Atreides players get all of the special targeting token cards that score 2 points for them, and player agency is essentially completely eliminated from the game.

That said, there are people I’d recommend Dune: Betrayal to, namely those that love social deduction games and have enough time on their hands to figure out some house rules. Having teams where some players are playing the game straight while others are incentivized to play it close to the chest is something I haven’t seen since Two Rooms and a Boom, which generally requires a higher player count to work. The targeting rounds have a feeling of being just short of a masterwork. But the fact remains that there are parts of this game that just don’t work right, and I firmly believe that it shouldn’t be on consumers to fix a product that ships broken.

Dune: Betrayal feels like the board game version of movie video games - obviously rushed, with a few good ideas stuck in a tar pit of mistakes. The amount of times you'll have a good game will be outnumbered by the times you won't even have a game.

Nick grew up reading fantasy novels and board game rules for fun, so he accepted he was a dork at an early age. When he's not busy researching the intricacies of a hobby he'll never pick up, Nick can be caught attempting to either cook an edible meal or befriend local crows.
Related Articles: Dune: Betrayal, Tabletop
Share
Tweet
Share
Submit