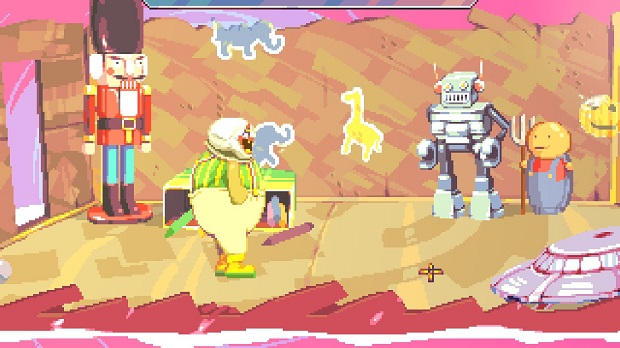 Like many others in my generation, clowns have always kind-of given me the creeps. What else could be hiding behind that garish clothing and makeup besides horrible secrets? However, even in spite of his ghastly appearance and troubled past, I’ll be damned if Dropsy isn’t the most lovable clown I have ever seen in fiction.

Dropsy is tickled pink by his gig working for the circus – that is, until he fails to put out his cigarette properly and the place goes up in flames, killing many of his pals in the process. After this tragic accident, everyone sees Dropsy as a murderer and can’t stand the sight of him. Because he wants to redeem himself, or perhaps because he’s naturally a warm-hearted guy who likes making people smile, he wants to go around the town and solve everyone’s problems so they’ll be happy.

That is, essentially, the premise of Dropsy: a mopey clown wandering around with his loyal circus pup (and eventually a larger gang of animals) trying to fix lives and get hugs. Or, in the case of the pup, pee on everything.

After every successful hug – whether it’s a real person or a friendly-looking tree – a drawing goes up on the wall beside Dropsy’s bed.

As the opening suggests, this game isn’t all sunshine and rainbows. Even though you’re making friends and spreading love, a wide variety of problems are discussed along the way. Hunger and homelessness, religious extremism and dead-end jobs, sickness and death – everything is fair game.

All of this depth is conveyed through a 2D point-and-click medium. The old school art style is perfect for this game, pairing well with the quirky but grim story. Everything feels immediate and over-the-top, from the average city streets to the surreal nightmares Dropsy has when he goes to sleep.

There’s no fatigue bar for Dropsy, so the only thing sleeping does is give you a peek into his recurring nightmares.

Dropsy himself is a very expressive character. He’ll cringe away in fear when someone intimidates him, droop in disappointment when something doesn’t go the way he wants, and wiggle in elation after receiving that ever-elusive hug. You can’t help but sympathize with him.

These displays of emotion are also due to the fact that there’s no text in this game, aside from an invented language you’ll see on scraps of newspaper or bulletin boards around town. Any speech or thought bubbles contain pictures instead of words.

As if point-and-clicks weren’t hard enough before, all of the directions being in pictures means you’re never entirely clear what you’re supposed to be doing. This made for a lot of start-and-stop progress. Much of the game went like this for me: encounter a puzzle, try to solve it, fail, take a break, try again, fail again, get frustrated, have a sudden epiphany, solve the puzzle, complete several quests in rapid succession, get stuck again.

Stop hootin’ and hollerin’ and just tell me what you want!

Another layer of confusion was created by the icons that appear when you can interact with something or someone. Hovering over a person or animal you can talk to makes a pair of lips appear, an eyeball appearing means you can look closer at something, and a grabbing hand over something means you can pick it up or manipulate it in some way. At some point, you’re traveling with a pretty large party, but there’s no differentiation between who can interact with what. If it’s a fire hydrant or a mound of dirt, it’s probably for the dog, and Dropsy is the only one who can talk to people, but almost everything else is guesswork.

In spite of this difficulty, I found myself compelled to keep coming back because I got sucked into the story, curious about how the cast of characters will fare. It’s easy to get invested in what’s going on, and the process of finding solutions to quests can be amusing, like feeding moldy cookies to a junk yard rat or disrupting a woman’s sermon by turning on rock music. Overall it’s a highly enjoyable experience, and I would recommend it to those who like their games on the strange side.

Dropsy is a bit of an oddball game, so I wouldn’t bet on it having wide appeal, but those who love it will really love it. It’s a point-and-click title without written hints, making it inherently challenging, but because the quests involve helping people, solving puzzles feels that much more rewarding. It’s such a heartwarming game, it’s easy to forget that the protagonist is an accidentally murderous clown.

Sarah Marchant is an office admin for a nerdy t-shirt company. She has a soft spot for indie games, a passion for story-driven titles, and a weakness for cooking games and anything with zombies.
Related Articles: Dropsy
Share
Tweet
Share
Submit