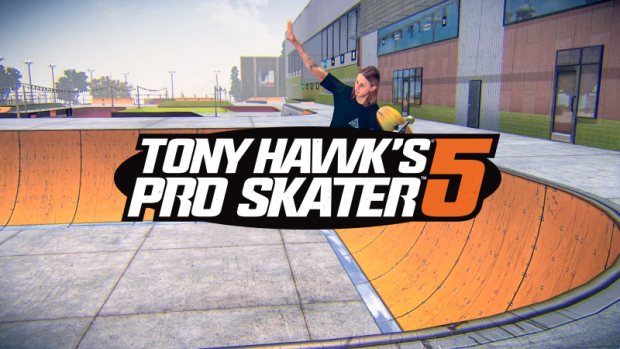 It’s hard to believe that just over a decade ago, Tony Hawk was one of the biggest names in video games. The professional skateboarder had created a hit in the late ‘90s with his arcade-style extreme sports title, and each subsequent release for the next few years continued to see the original game’s charm become more robust and refined. The launch of a new Tony Hawk’s Pro Skater game each year even used to feel like an event in the gaming industry, and the series had become so mainstream that almost every new hardware launch of the first half of last decade included a Tony Hawk game beside it. Eventually, though, after many years of annualized releases and the increasing competition from EA’s more realistic and generally more favorable Skate franchise, it was time for The Birdman to take a break.

Enter Tony Hawk’s Pro Skater 5, a game that aims to recapture the magic of Tony’s earlier days, before increasingly over-the-top scenarios and awkward peripheral add-ons wore the franchise out. Unfortunately, Tony’s return is marred by plentiful bugs, boring visuals, an unintuitive presentation, and frustrating controls. Not only does Pro Skater 5 fail to bring any innovation to the dormant series, it can’t even match the quality of its predecessors. This is a game that is so faulty and near-broken that it wouldn’t even have been passable in the series’ heyday. Tony Hawk’s Pro Skater 5 is an absolute mess.

Tony’s latest outing sets out to return the franchise to its classic roots, and in that respect it does see a certain level of success. Players choose their level from a set of locales that have been overly stuffed with grind rails, ramps and quarter pipes, and are let loose to bust out some big tricks and huge combos. Familiar objectives, like collecting S-K-A-T-E, finding a hidden tape, or earning a high score, are all present, and while these goals are relatively simple by today’s standards, they will provide a sense of nostalgia.

The school level will feel familiar to fans of the series.

The similarities end there, though, as Pro Skater 5 doesn’t even bring forward the same level of standards seen in previous releases. For example, the Create-A-Skater option, a gameplay feature that has been around since THPS2 and allows customizing a new skater’s appearance and attributes from the ground up, has been significantly stripped down. Rather than creating a brand new skater, players now only have the option of tailoring existing pro skaters to their liking. This means that rather than truly building your own unique character, you literally need to overwrite an existing one – an extremely odd design decision when swapping out an actual pro skater’s head with that of a fictional character. Clothing and appearance are not customizable to nearly the same degree that they used to be either, as only the head, board, and complete outfit can be changed, and each skater begins as a blank slate from an attribute standpoint, so there really is no difference between each pro. As a franchise that helped pioneer the whole “create your own character” movement, its omission here is incredibly disappointing.

Gameplay options are not the only things that have been dumbed down either, as many of the tricks that Tony Hawk popularized previously are no longer present in Pro Skater 5. Abilities like transitional grinds and flatland tricks, which allowed you to flow one trick into another mid-combo, are mysteriously absent. Flip tricks that can be multiplied, such as when the button combination for a kickflip is performed three times in rapid succession to achieve a triple kickflip, have also sadly been removed. It’d be understandable if abilities from Tony’s later games had been removed, as a return to the series’ roots is the ultimate goal here, but these aforementioned omissions were present in Tony Hawk’s Pro Skater 4, leaving their exclusion here puzzling and inexcusable.

The lack of some of Tony Hawk’s more complicated tricks may come as a blessing, though, considering Pro Skater 5 features a rage-inducing control scheme. The series’ once fluid controls now feel stiff, slow, and unwieldy, making controlling your skater feel like an imprecise nightmare. Steering feels generally wonky to say the least, and your turning radius seems much wider as well, making navigating the game’s level an exercise in patience. In one case, I even managed to get my skater stuck in a corner, bouncing and flailing from wall to wall for over 30 seconds until I could break free. Examples like this are littered throughout THPS5 and cause the player to become wary of where they’re headed at all times.

As an added control, players now have the ability to slam their skater down to the ground from midair, in an attempt to provide more accuracy for precise landings. This ability, while helpful in theory, actually turns out to be obtrusive in its execution. This move is mapped to the same button as grinding, so lining up a grind is now considerably more difficult as the player can’t initiate the move itself until the last possible moment, lest they land prematurely and break any combo that was building. This is an ability that could have been clever, but does more harm than good in its current state.

In addition to the game’s already difficult controls, keeping your skater from bailing can be increasingly difficult due to an abundance of glitches and bugs. Collisions with invisible objects, random bails that send you hurtling skyward, and the occurrence of awful clipping that lets you pass through objects entirely are all too common. Mission objectives don’t always seem to properly register either; in one particular mission that had me collecting ice cream cones and delivering them to a swimming pool, the game never registered that I made it into the pool despite circling inside it for close to ten seconds. All of these examples occur far too often and demonstrate just how unpolished THPS5 really is.

Menus and presentation also hamper the gameplay experience. Most major game options can only be accessed from the main menu, preventing any type of intuitive transitions. Whether changing your skater and level, or just trying to spend some earned attribute points, players are forced to exit back out to the main menu and back in again just to make the smallest of changes. It’s a frustrating experience that lacks any sort of user-friendliness and stops what little rhythm the game has going for it.

Pro Skater 5 doesn’t get any relief from a visual perspective either. The art style on display in THPS5 features a meld of undetailed realism and a light cartoonish overlay to form an aesthetic that is largely unappealing. Skaters and their environments look washed out, lifeless, and bland, which, when coupled with a framerate that stutters far too frequently, makes the game’s appearance feel incredibly generic. Making matters worse are the jagged and uninspired level designs that show a disappointing lack of any visual flare we’ve come to expect from current generation games. This is a game that looks like it’s from last generation at best, which is even more of a shame when considering that it can’t even play like one.

One area where Tony Hawk 5 does try to innovate is in regards to a living online environment. Beginning a game session throws players into an online skatepark by default, where they will see other players who are collecting the same level items that you will be. However, this online free skate session feels a little all over the place, as collisions with other players are common due to imprecise hit boxes. Furthermore, slight lag issues incorrectly animate other players in a way that makes them seem like they’re just flailing in midair, with boards that hover above rails rather than connect during grinds. Given that online play doesn’t really add much to the game and playing missions generally pulls you out of the online session anyway, Tony Hawk 5 is a game that is best played solo.

Tony Hawk’s Pro Skater 5 is a real shame. What could have been a revisit to one of gaming’s classic franchises is instead made up of poor controls, ugly visuals, and way too many bugs. Not only does Pro Skater 5 not breathe life into a franchise that already ran itself into the ground a decade ago, it can’t even live up to the standards of its predecessors. This is an experience that feels undercooked in every aspect and is ultimately a big disappointment.

This skater not only fails by today’s standards, it wouldn’t even be passable during Tony’s heyday. Lousy controls, bland visuals, and an abundance of bugs make Tony Hawk’s Pro Skater 5 a broken mess.

Gaming Trend's resident amiibo collector, Matt's a lifelong gamer with a soft spot for Nintendo. As a new father, Matt often struggles to stay as involved as he has been in years past but can always be counted on to come back for some engaging geeky conversations. A resident of Philadelphia, he is currently working on building up his Man Cave with all things Marvel, Star Wars, and Video Games. As an old-school gamer, Matt firmly stands by his belief that gameplay will always be more appealing than story.
Related Articles: Tony Hawk's Pro Skater 5
Share
Tweet
Share
Submit