Back in my university days, I was a DJ for our local college radio station, and I had a blast with it. While it was more of a talk radio sort of deal rather than putting records on turntables, I always dreamed of the day I could get my own equipment and let people hear what I was listening to. Fast forward a few years and Harmonix released Dropmix, a game that would allow anyone to be a DJ with an innovative drop-in/drop-out card mixing system. While that game is dead and gone, from the ashes rises Fuser, a great DJ experience that aims to be a social experience for all types of music lovers.

I know many of you haven’t played Dropmix (myself included), but there are some similar comparisons to both Fuser and its spiritual predecessor. You have a turntable that can hold up to four records, and almost every song has four different discs, which range from instrumental backing tracks to vocals and backing vocals. While prepping your set, you can place whatever you’d like that’s currently in your crate, which is made of songs you select before you start.

While you can place whatever (and I mean whatever) records you want on your turntable, if you want to earn points you have to place records based on the timing of the downbeat. You can see when to do this thanks to indicators below the record and on your turntable; additionally, there will be sections that will correspond to each colored disc. While they aren’t on the downbeat, placing your record on these sections will grant more points too. 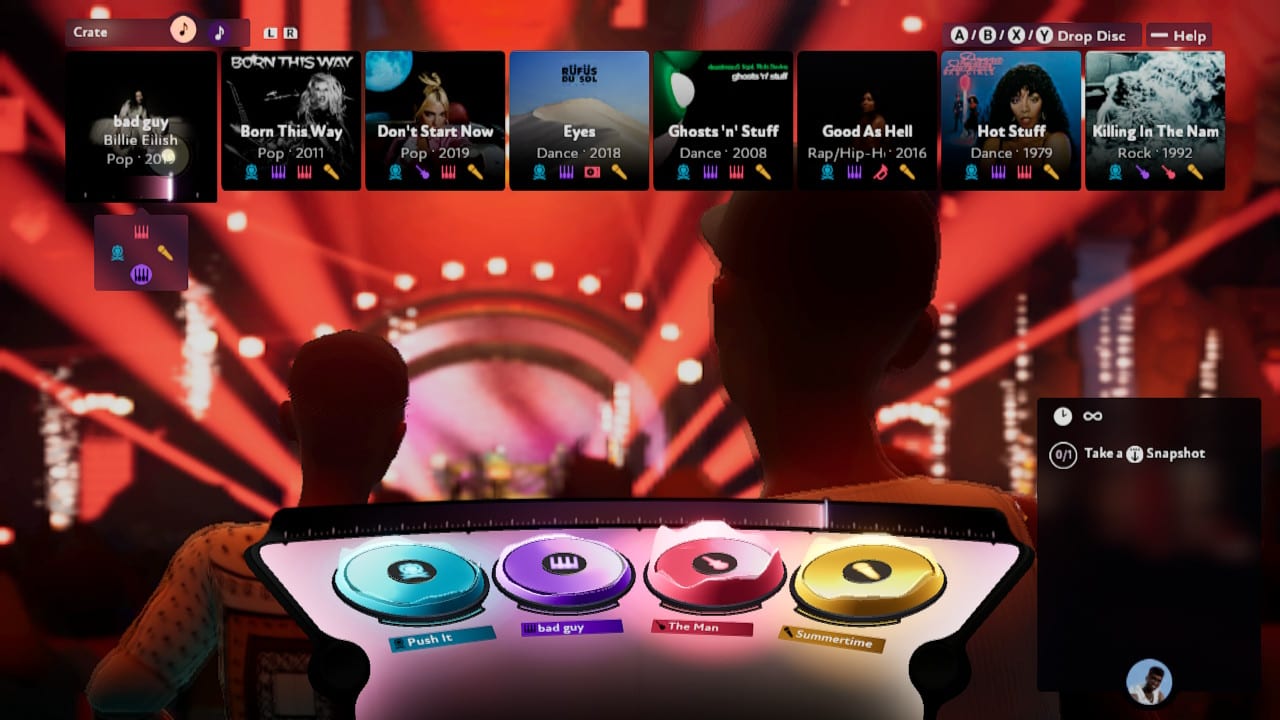 When you start playing, you may be tempted to just do a spread of “blue/purple/red/yellow” discs in order (and if you place them by tapping face buttons, they will default to the position on the turntable). However, you can also hold drops by holding the face button that corresponds to the disc you want and put them wherever you want on the turntable. Do you want four synth backing instrumentals? Go for it! In addition to the basic four disc spread, you can also add tweaks such as sound effects, volume fade-outs and fade-ins, and even pitch shifting or changing the tempo. Fuser’s scoring system rewards creativity over all else, and even if your current mix doesn’t sound great, as long as you got the technique down, you’ll score major points.

I must commend the simplicity of how fun and professional your mix can sound. Seriously, you can make All Star mixed with X Gon’ Give it to Ya and Any Man of Mine and make it a legitimate bop. The user interface is relatively easy to navigate given how much freedom you’re given, and while it can get overwhelming at times (like a real DJ!), the whole tracking system is innovative and allows casual and veteran DJs alike to enjoy the gameplay.

There are a few elements that can feel clunky, such as the fact that you have a cursor that you move rather than pushing directional buttons to navigate selections. The indicators that tell you when to place a disc for bonus points are hard to read in handheld mode, and just difficult to follow once you get into the swing of things. I just ended up placing things on the downbeat to increase my score combo in the campaign rather than following the colored dots because it felt easier to chain and not mess up. The Switch version performs surprisingly well; while it does have a few blurry textures and framerate issues in handheld mode, it’s fully playable and I’m glad I can take it wherever I go. (Well, mostly wherever; a ton of features are locked offline, so I’m tethered to online areas.) 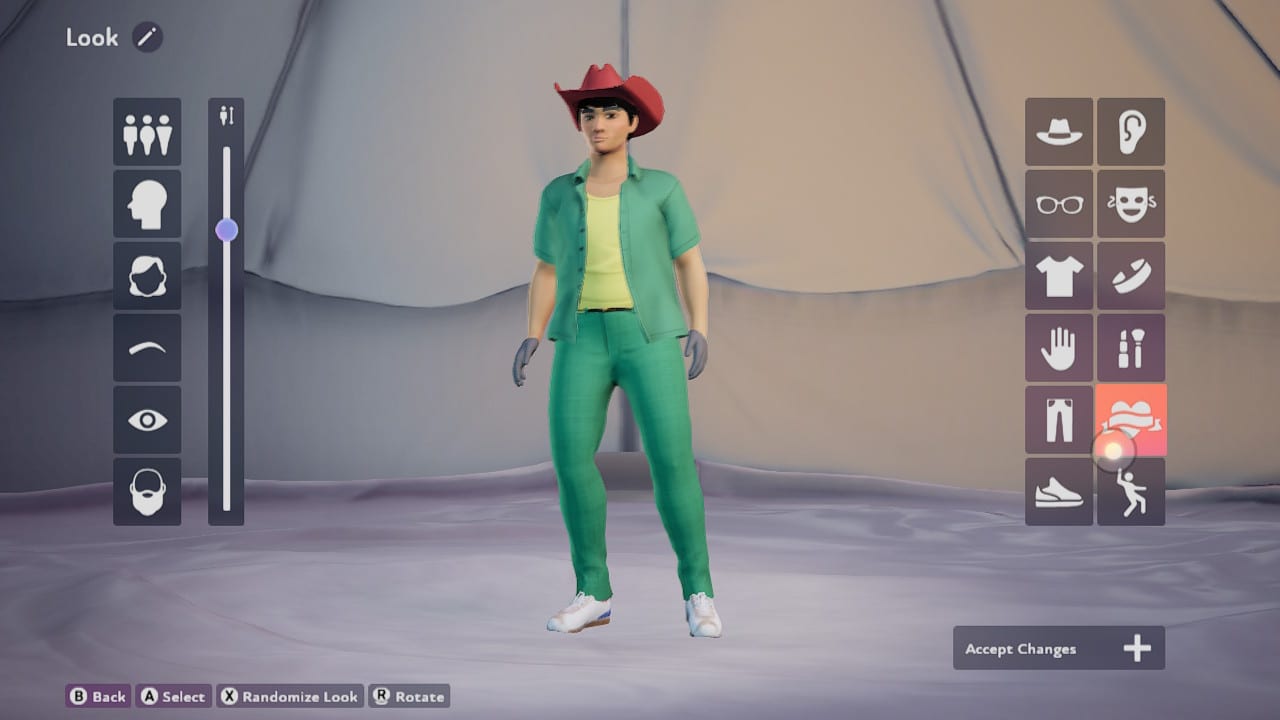 Fuser is a different beast if you want to tackle it alone or with online friends; the single-player campaign is lengthy and structured in a way that eases you into the mechanics of freestyling a set while giving you goals to follow. These stages are mixes of tutorial levels, with goals such as “Play a track from a certain genre” to “exclude vocals for a set period of time” popping up occasionally. Periodically, random people will ask for requests (basically the equivalent of the annoying fanboy that keeps hounding you to play Hot Stuff even though it’s a set full of Rock music), and if you can complete them, you’ll get more points. This score attack approach works well as a single-player mode, and is a good, if slightly slow, way of progression.

The campaign allows you to interact with six different DJs across six venues, with each of them offering you some advice and guidance while you lay down the tracks. It’s your average “I wanna be the best DJ in the world!” plot that exists as an excuse to introduce… well, everything fun about the game. From the colorful personalities (Cherry Dip’d, the second venue, has a literal child as your manager, complete with a costume that looks like DeadMau5 and Fortnite did a collaboration) to the crowds forming around the stage, there’s a lot of personality oozing out of here. It’s basically if Rock Band translated into a DJ simulator (which, given how Harmonix developed this title, is a fair comparison). 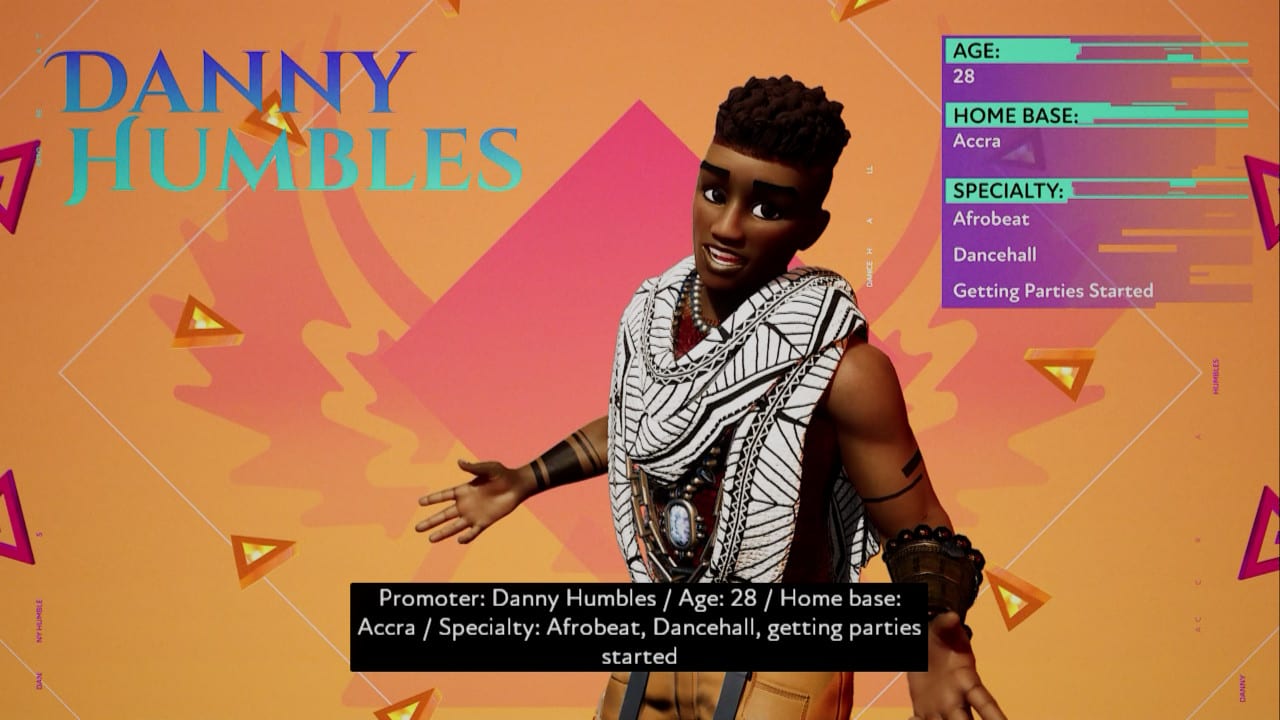 After getting a crate of songs and some in-game currency to spend on other things, you’re free to explore the world of Fuser, though it’s recommended that you finish at least the second venue of the campaign before delving into multiplayer. I’d recommend you finish at least the third one since there are some cool minor things you can do with effects and volume which are noted there. The game can get as simple or complex as you make it, with some instruments included so you can make your own loops on the fly.

Like I said in the beginning, Fuser is a social experience, with all the fun modes having a sharing component of some sort. Heck, the fact that this is cross-platform with every version out of the box is an impressive feat and will offer some wonderful community-based feedback in the future. The freestyle mode is the place where you can experiment with your mixes and even make your own snippets to share online through its in-game follower system. While I couldn’t mess around in-depth due to the inexistent ecosystem pre-launch, it’s surprisingly robust and simple to make a mix and send it to the world where other people can like it, save snapshots of the mix (which makes it a preset they can change in their own game), and even follow you for more. It feels like a social media system, and I really hope that this takes off; it’s a wonderful community tool and so simple to use! 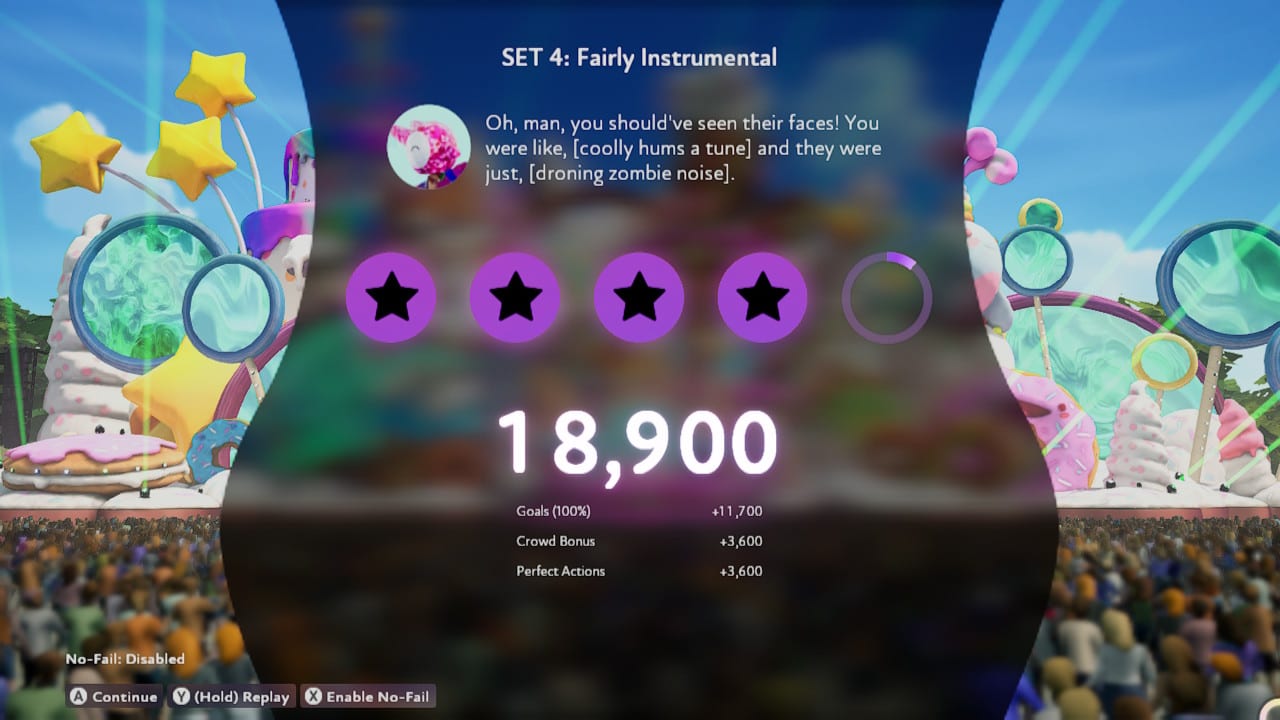 The multiplayer modes also take advantage of the social aspect of Fuser. While I wasn’t able to check out the Battles mode (which aims to be a competitive mode against different DJs where you have to make the best mix possible), the Co-Op Freestyle mode is a wonderful addition. Here, you and other DJs will take turns making your own mix, with viewers watching you and making their own requests or reacting to your performance. You can’t win or lose in this mode, but at the end of your combined set, you’ll get feedback on how many viewers or DJs liked your set, how many requests you fulfilled, and even how many people saved snapshots of your current spread. It encourages you to keep playing with others, and even if you don’t think you’re ready to compete with the big guns, you can still participate in an audience capacity ala Jackbox Party Pack. Seriously, I’d love to see stay-at-home music festivals made with this game, it’s that entertaining. 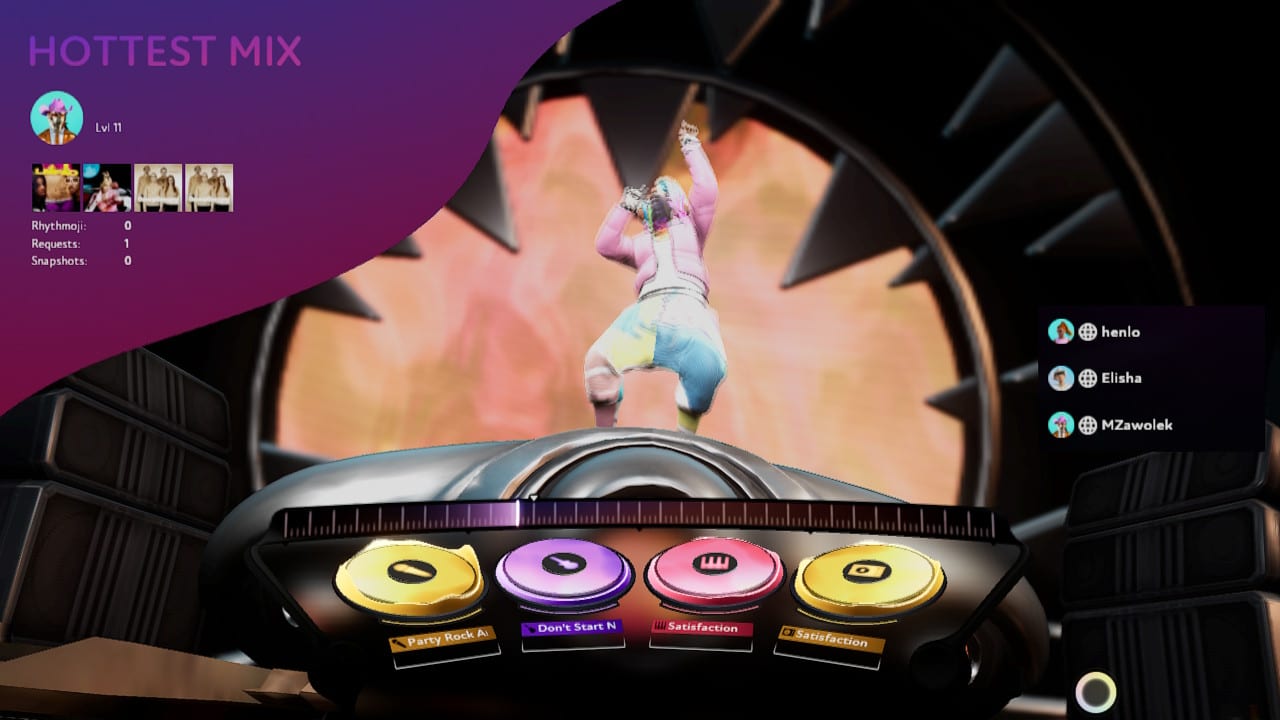 Now, it’s a bit surprising for me to talk about a rhythm game and talk about the game’s music so far down in a review, but that’s because Fuser’s soundtrack is simultaneously the strongest and weakest part of the game. Much like Rock Band or Dance Central, Fuser’s licensed soundtrack is stacked with 100 songs in the base game, and more will arrive in the future. You’ve got top 40 tracks like The Middle, Don’t Stop Now, and Thunder mixed with rap and hip-hop songs like Regulate and In Da Club, plus a few oldies like Lady Marmalade and Never Gonna Give You Up. It’s an eclectic base songlist with tracks that will appeal to everyone who checks out the game.

Now the problem with this is that it sacrifices genre accessibility for genre depth. In theory, 100 songs seems like a juggernaut, but most songs are locked when you first start. They’re easy to unlock (200 in-game points a pop), but in order to gain the currency, you’ll have to level up. It won’t be a problem if you’re planning on playing this game in multiplayer mode, but for solo players wanting to just experience everything Fuser has to offer, the campaign is a lengthy and grindy way to level up. For reference, it took me about half an hour in the campaign to level up once (which gives you enough credit for one and a half songs). In multiplayer? Just spend the same amount of time in co-op freestyle and your level will most likely double. It’s a slow drip that’s slower for single players. 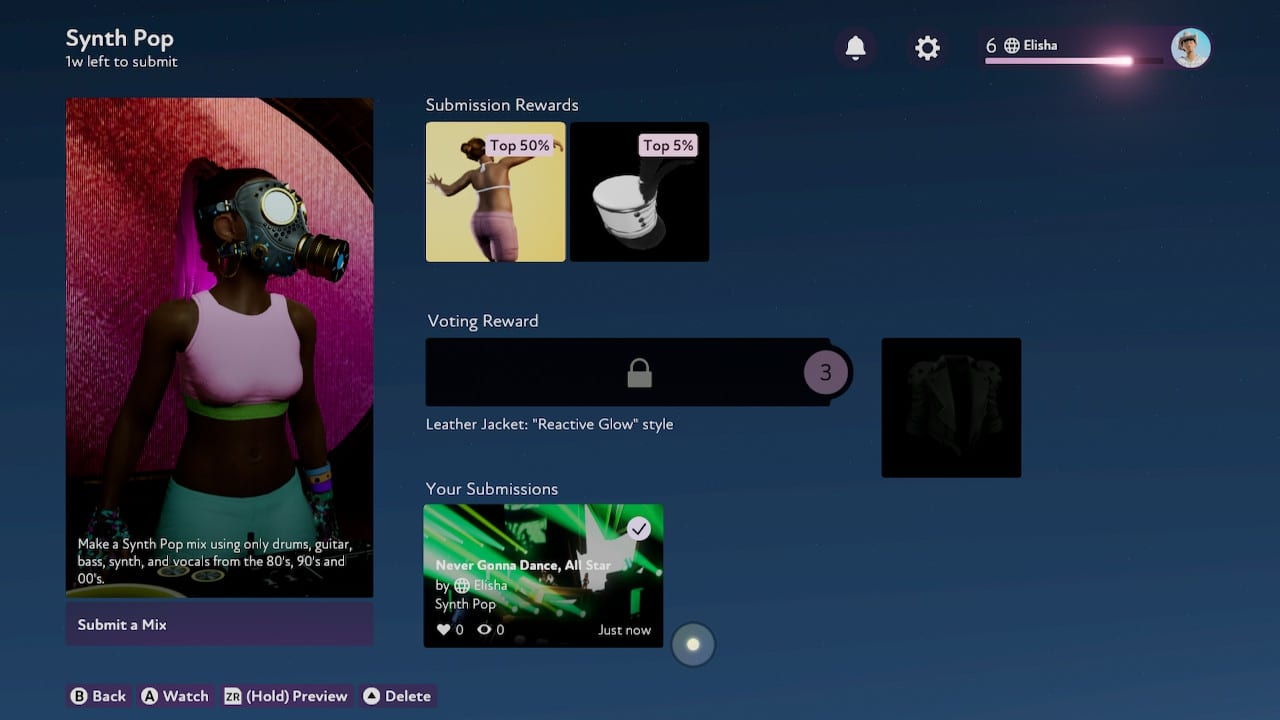 Additionally, with how the way the game works, you can go through a dozen songs in a set which means unless you have everything unlocked, prepare to hear the same tracks over and over again until you can get more. It’s even worse when some sets require you to use songs from the country or Latin/Caribbean genre; there’s a piddly four songs included in Country here (with two of those locked at the start), so you might get sick of hearing Jolene over and over again until they release more Country DLC. I would have much rather have the smaller genres lumped into bigger genres just so it could work better with the game as a whole. I really hope Fuser takes off, because adding 100 more songs as DLC eventually will make this experience so much better for everyone.

Fuser is a wonderful title that will appeal to anyone looking for a good time with great beats. Whether you’re spectating a user-created set or making your own beats with the base soundtrack of 100 songs, there’s no better time to spin the disc and get the house poppin’!

Elisha Deogracias is an aspiring accountant by day, freelance writer by night. Before writing for Gaming Trend, he had a small gig on the now defunct Examiner. When not being a third wheel with his best friends on dates or yearning for some closure on Pushing Daisies, he's busy catching up on shonen manga and wacky rhythm games. Mains R.O.B. in Smash. Still doesn't know if he's a kid or a squid.
Related Articles: Fuser
Share
Tweet
Share
Submit