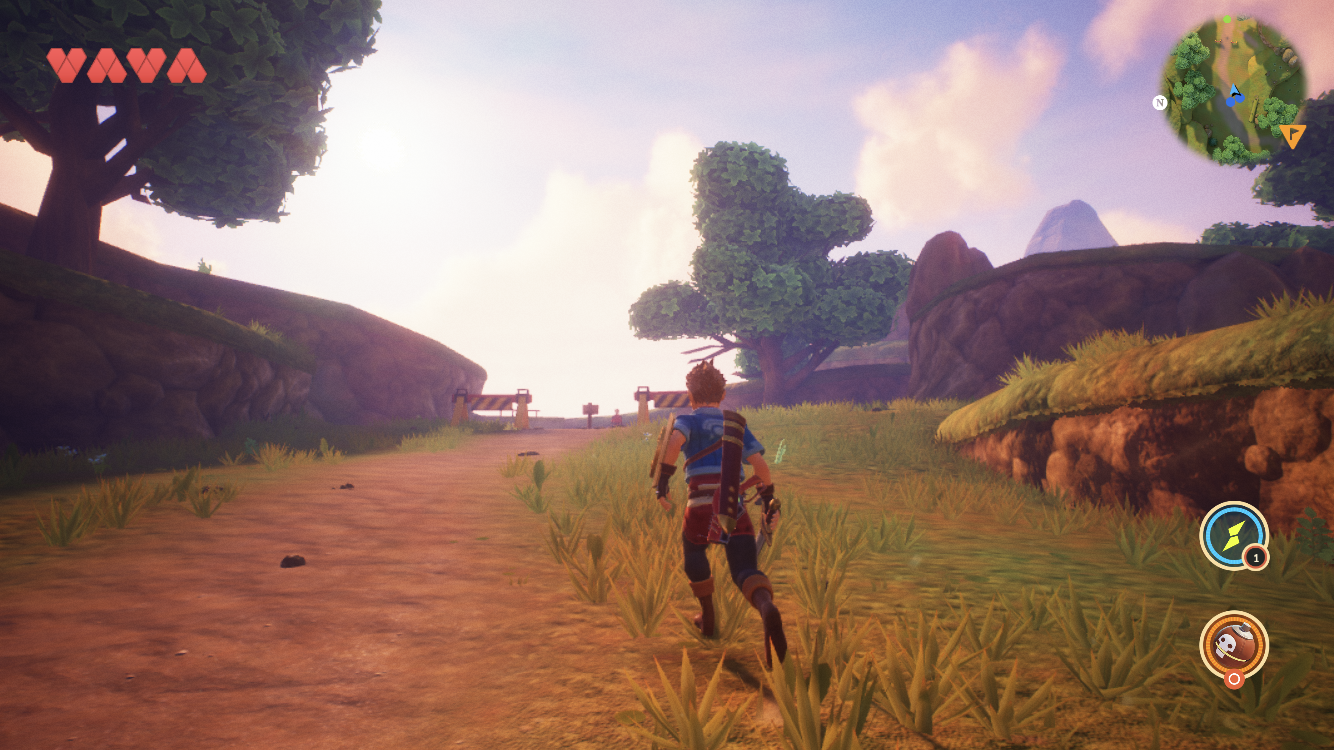 Oceanhorn has never hidden its inspiration from the Legend of Zelda. If the original was influenced by Link to the Past, its prequel, Oceanhorn 2: Knights of the Lost Realm, more so takes after Ocarina of Time. It’s pretty obvious: your first big task is to return three colored emblems to temples around the world, the opposite of what you do as young Link. Unfortunately, Oceanhorn 2 fails to live up to its inspirations in many ways.

In Oceanhorn 2, you play as… some guy. He’s never given a name, and is only referred to using either pronouns or the titles you gain by leveling up, so we’ll just call him the Knight, since he becomes one after a short tutorial on Outlaw Island. There, you’ll learn to swing your sword, block attacks and push objects with your shield, shoot targets with your caster gun, as well as solve a few puzzles and fight a boss. While the game is currently only available on the iOS app store through Apple Arcade, I would highly recommend using a controller when playing as I found the touch controls to be cumbersome and awkward at best. You move by sliding your finger along the left side of the screen and control the camera using the right. Other actions, such as attacking or using items, are performed by pressing virtual buttons. While you can play this way if you really want to, you’ll be covering up large portions of the screen with your fingers which can obscure vital information. You’ll also want to see as much of the screen as possible because Oceanhorn 2’s environments are drop dead gorgeous. Multiple times I stared at the screen wondering how all this was running on my phone, then I remembered it was draining my battery like crazy and making the device very hot – another reason to play with a controller. The soundtrack is equally fantastic, with the overworld map theme being a highlight. 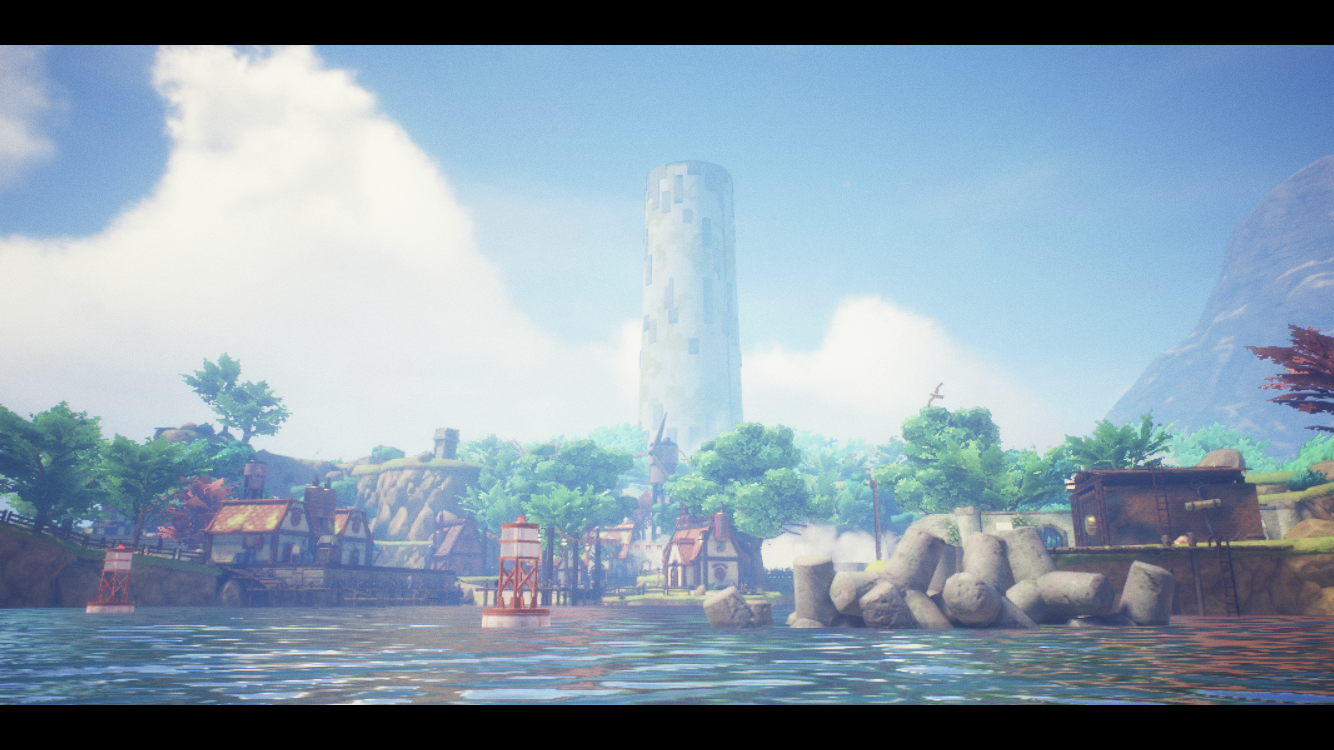 While Oceanhorn 2 may excel in its musical score and environmental design, those are unfortunately the only two things it stands out in. Character designs, aside from the Knight, just look off in one way or another. It might be their eyes or the way they animate during cutscenes, but something about them just looks wrong. The characters themselves also have almost no character or personality to them, with almost all dialogue in the game being poorly written and voiced (aside from Mesmeroth) exposition. Your two companions, Trin and the robot Gen, being the worst offenders in both categories. Their incessant and irritating dialogue boils down to warning you about enemies you’ve already killed (without their help, mind you) or reminding you every few minutes of what you’re supposed to be doing. Since their only purpose in gameplay is to weigh down switches, I sincerely believe the game would have been better off without them.

Puzzles in the game can feel either obtuse and confusing or deviously clever; there is no in between. On one side, you’ve got puzzles where the game expects you to shoot a fire charged bullet through the solid wall of a tower to light the brasier on top, while on the other are puzzles where you must weigh down a switch with a pot to lower a platform, then blow it up with a bomb once you’re on top of said platform to raise it once more. While the former are more common than the latter, it’s still extremely satisfying to solve those few brain teasers. You’ll be solving said puzzles with the same tools you use in combat, namely your sword, shield, and caster gun, which can shoot normal or elementally charged ammunition. Sword and shield combat is essentially just mashing the attack button and blocking or dodging when your opponent attacks, while also using your gun to defeat foes at long range. It sounds simple, but the game gets a lot of little things wrong that add up to make combat a chore. First off, there’s no lock-on function to keep track of the enemy. Well, that’s not entirely true: the Knight and the camera will face an enemy while holding the shield up (which you can only do by selecting the item when in touch controls, a controller has you holding the right trigger), but try to attack or dodge and you lose that lock immediately. Aiming your caster gun feels sluggish and imprecise as well when using a controller, which makes the best strategy in every situation excluding bosses to just mash the sword button and pray you hit something before you die or have to heal while Trin and Gen watch you suffer. When fighting a boss, conversely, you’ll need to find a way to make them vulnerable, then attack their glowing weak spots. 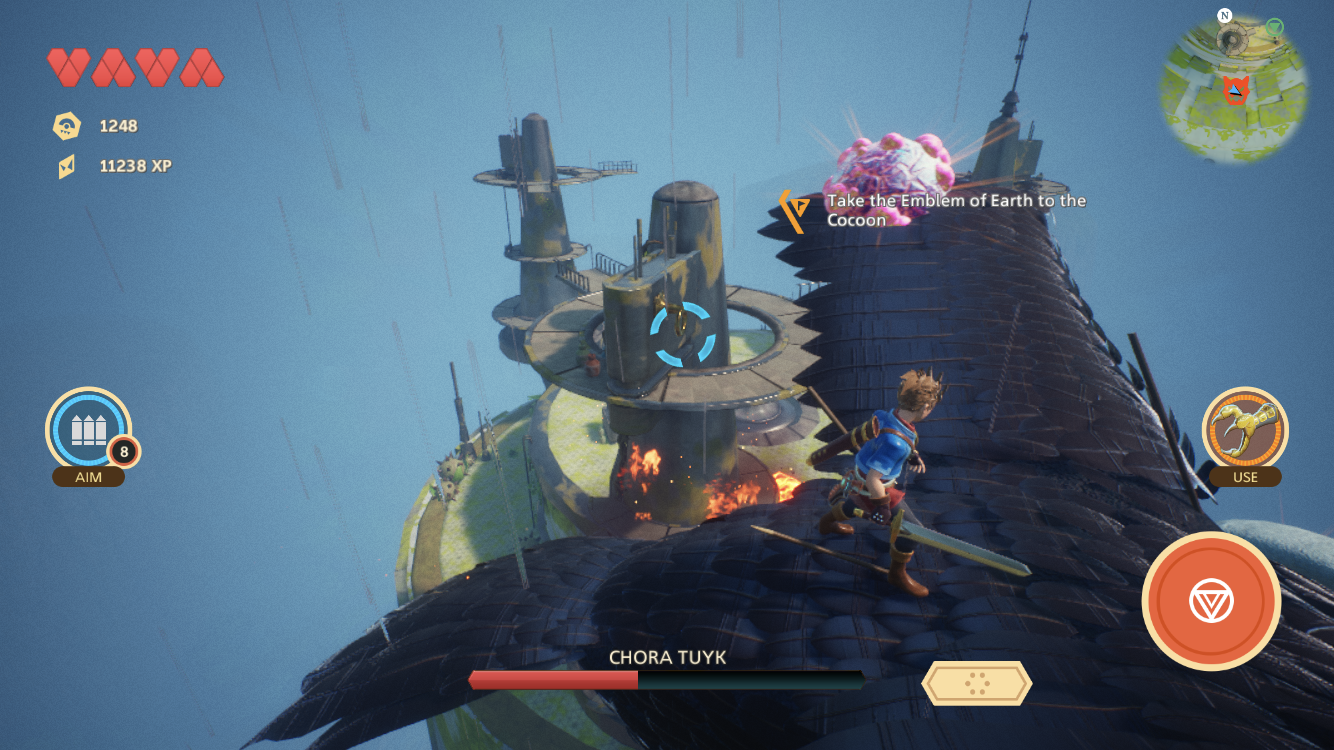 One of the bosses is a large bird which, for example, you’ll need to grapple onto while it’s flying to do any damage, but doing this makes the camera freak out and you can’t see where you’re standing, let alone swinging. Most bosses follow this concept of being cool concepts, but infuriating execution. Another is a giant turtle which you need to flip over to do damage. You do this by connecting one electric conduit in the room with the one on its back, then you can jump down and pile on the hurt. Except, you can’t actually hurt it easily since all the weak spots are out of range of your sword, leaving shooting it your only option. However, the gun has needlessly limited ammo that you’ll need to break pots in a hope to refill (if you even get the right type of ammo) and long recharge times, so you can only do a pitiful amount of damage per cycle. To top it all off, if you find yourself anywhere near the underside of the boss you’ll be instantly killed and have to start the fight all over. I almost quit right then and there out of frustration, though I’m glad I didn’t because the final dungeon features the best of what the game has to offer.

Oceanhorn 2’s best quality is exploration. The gorgeous world has tons of nooks and crannies to discover, which is fun in its own right. For some players, however, the rewards for doing so will seem lackluster. You can find a few collectables like bloodstones and knight’s daggers around the world, but for the most part your curiosity is only rewarded with money. Money is pretty useless here, you can buy a few upgrade shards and refill your health and ammo but that’s about it. While I enjoyed exploring the terraformed world of Gaia, the rewards for doing so didn’t outweigh the many, many frustrations throughout the rest of the experience.

Oceanhorn 2: Knights of the Lost Realm

Oceanhorn 2: Knights of the Lost Realm has a beautiful and interesting world to explore, but its many blemishes such as terrible puzzle design and combat or a poorly written and voiced story hold it back too much to recommend.

David is the kind of person to wear his heart on his sleeve. He can find positives in anything, like this is a person who loved Star Fox Zero to death. You’ll see him playing all kinds of games: AAAs, Indies, game jam games, games of all genres, and writing about them! Here. On this website. When not writing or playing games, you can find David making music, games, or enjoying a good book. David’s favorite games include NieR: Automata, Mother 3, and Gravity Rush.
Related Articles: Indies, Oceanhorn 2: Knights of the Lost Realm
Share
Tweet
Share
Submit