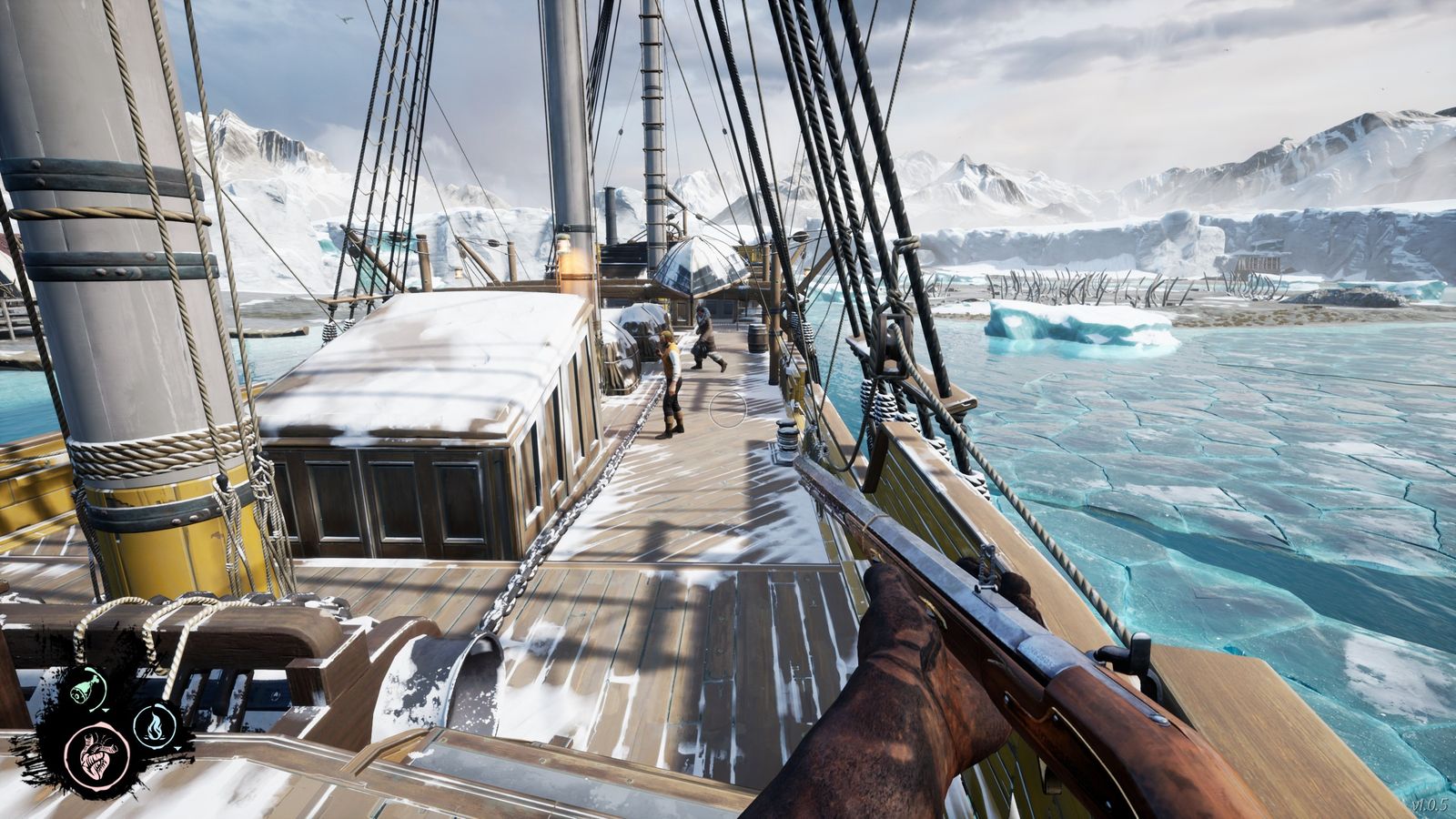 I’m going to do my best to not make any comparisons to Among Us, or even unironically add “this is what Among Us would be like if it was set in the 1800s”. No, Dread Hunger is its own thing, it does its best to try to stand on its own two feet and shy away from the repetitive nuances of the Player-Imposter genre. So that’s what this review is going to start with, and man, it really does try its best to innovate on a genre that really feels burnt out in recent memory, by a game that once took the world by storm.

So what is Dread Hunger? Well, it plays into the Player-Imposter genre with the intention of making you feel like you make more of an impact in its world than most other games in this genre seem to do — and it happens right off the bat. As you progress through the tutorial, the game promises that there’s a story involved with lore that appears to be deep-rooted and pivotal to the game. You get to test out each role (except for the imposter-esque role of Thrall) so you feel more aware of the gameplay mechanics before your first real game. And this works great — you learn what role each character plays and how to play it, and the dread that follows from the consequences of failing to keep your crew alive and safe. 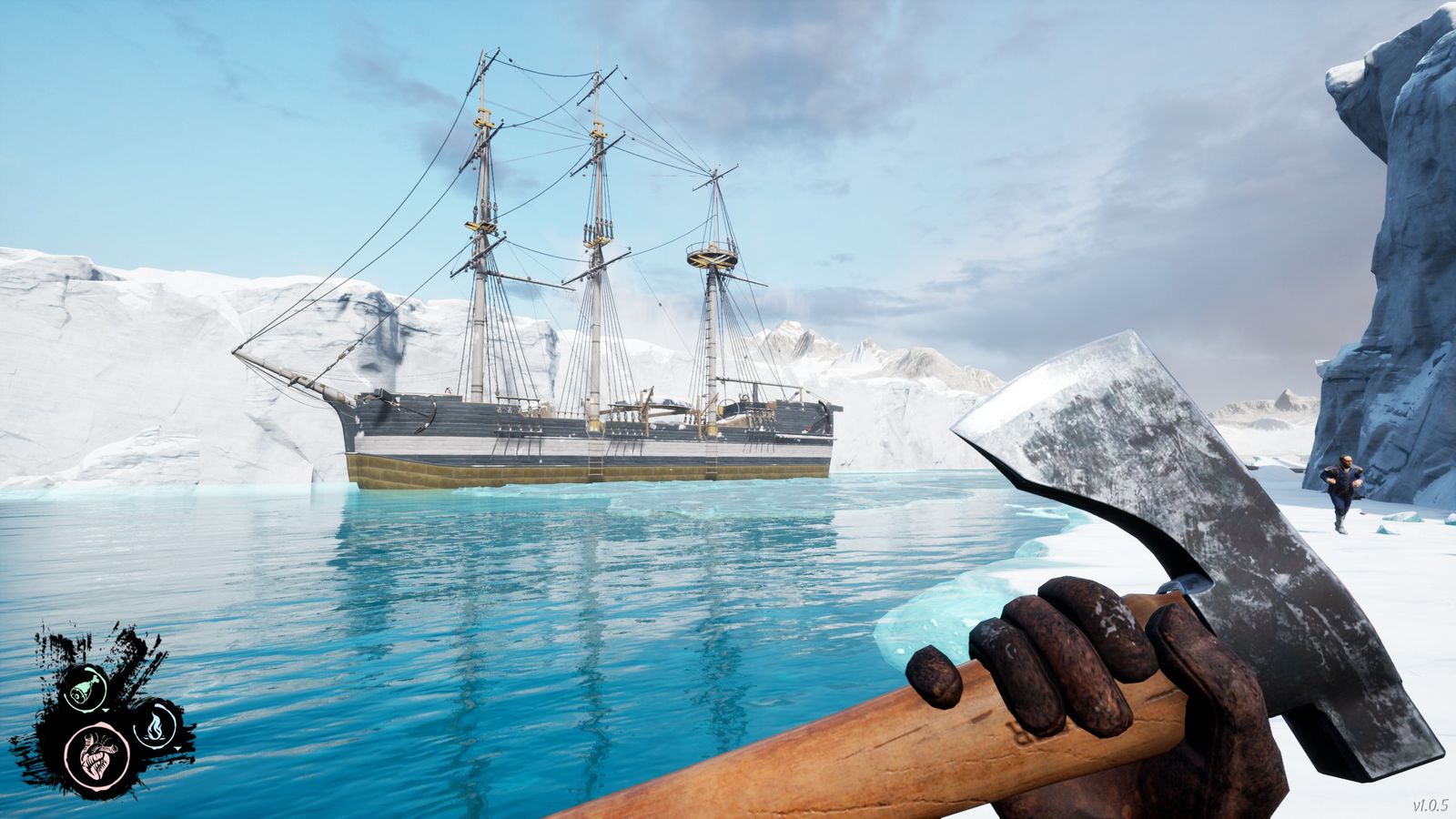 Now if you play as the Thrall, you get to play your role however you wish — bearing in mind that if you come across immediately as suspicious then you’re probably going to be thrown overboard and left out in the cold. That’s where the fun really comes into play. From the outset, you will have picked out a character/role, like the Hunter, be given that role’s equipment, and need to use whatever skill set you have in real life in order to pass off as friendly. For the Hunter’s case, they’re given a bow and arrows and tasked (or encouraged) to retrieve food. From there, it’s all up to you. Want to lure the Chaplain out, shoot a few arrows at him while he’s being attacked by a wolf, and trick the entire crew into thinking he was killed due to his own dim-wittedness? Just be sure he doesn’t see you and dob you in because everyone has a 2nd chance in this game if they’re killed, and he’ll just hunt you down.

There are eight spots on the ship, and eight roles to choose from. The Chef is given a cleaver and encouraged to cook the food brought onto the ship, the Chaplain is given a shovel and encouraged to dig up bodies to retrieve whatever treasures lay on frozen corpses, the Royal Marine is given a gun and… you get the point. The roles exist for the sole purpose of encouraging players to roleplay, either vocally or through their character’s actions, and so setting up the scene for your trip out to sea (or well, through an icy gorge). If you’re not a Thrall your overall goal is to make your way through the gorge, blow up the iceberg at the end, send your ship out to the open waters — all effectively in the space of three days. Once the third day hits, the blizzard falls, and if you’re not already at the iceberg and in the process of blowing it up you very likely won’t survive. The time-management element, accompanied by the mental stress of trying to place your trust in the right person, makes for a very stressful, very difficult experience. But, man… the payoff to get that ship out to sea is like a 500lb weight has been removed from your shoulders. 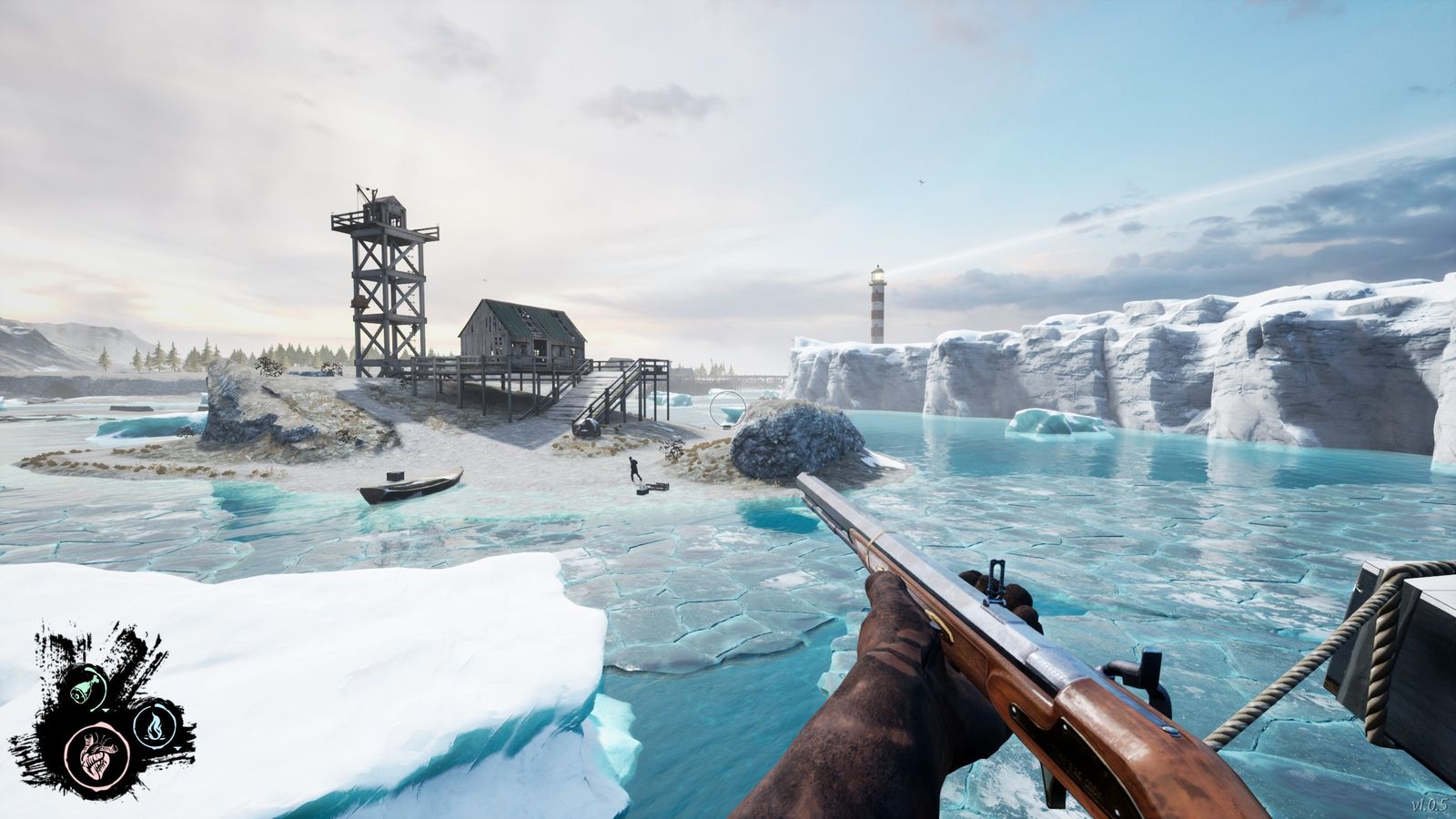 Now, all this stuff is well and good, but it wouldn’t be a Ben Lombardo review if I wasn’t critical. There are three big, big things I have a problem with this game. Let’s start with the story. In the tutorial, the game leads you to believe that lore plays a major part and that’s what makes it stand out from other games in the genre. Well… outside of the tutorial and just selecting what expedition (maps) you want to go on and explore, there’s not much more to it. It’s a very empty promise, and one that really got my attention from the outset, so it’s such a shame how it ends up as. This game would truly become a behemoth in the genre if it attempted to have some kind of Lovecraftian story arch rooted within its seams — being out on your expedition and slowly uncovering what happened to the bodies you encounter, the ships that are beached, or even why the Thralls are there in the first place would all be major selling points to this game.

My other major problem with Dread Hunger is with the character roles. It’s a great idea, don’t get me wrong, and it’s definitely something that needs to be introduced into this genre, but what the devs intended and what results are two different things. As I said early, the game encourages you, more than it requires you, to play the role. You can just pick the Captain, and head off-ship immediately to go and tackle the deadliest animal the game has to offer – the polar bear. But, it’s encouraged that you stay on the ship at all times to keep it safe, afloat, and to keep the crew in check. Most players will play the former way, and there’s no consequence to doing this because there’s nothing keeping the players in check. Hell, even if there were role-specific quests in this game it’d subconsciously force players to stay in their lane. For a game like Dread Hunger linearity is what keeps the ship and your sanity afloat — without it the gameplay dries up quickly. 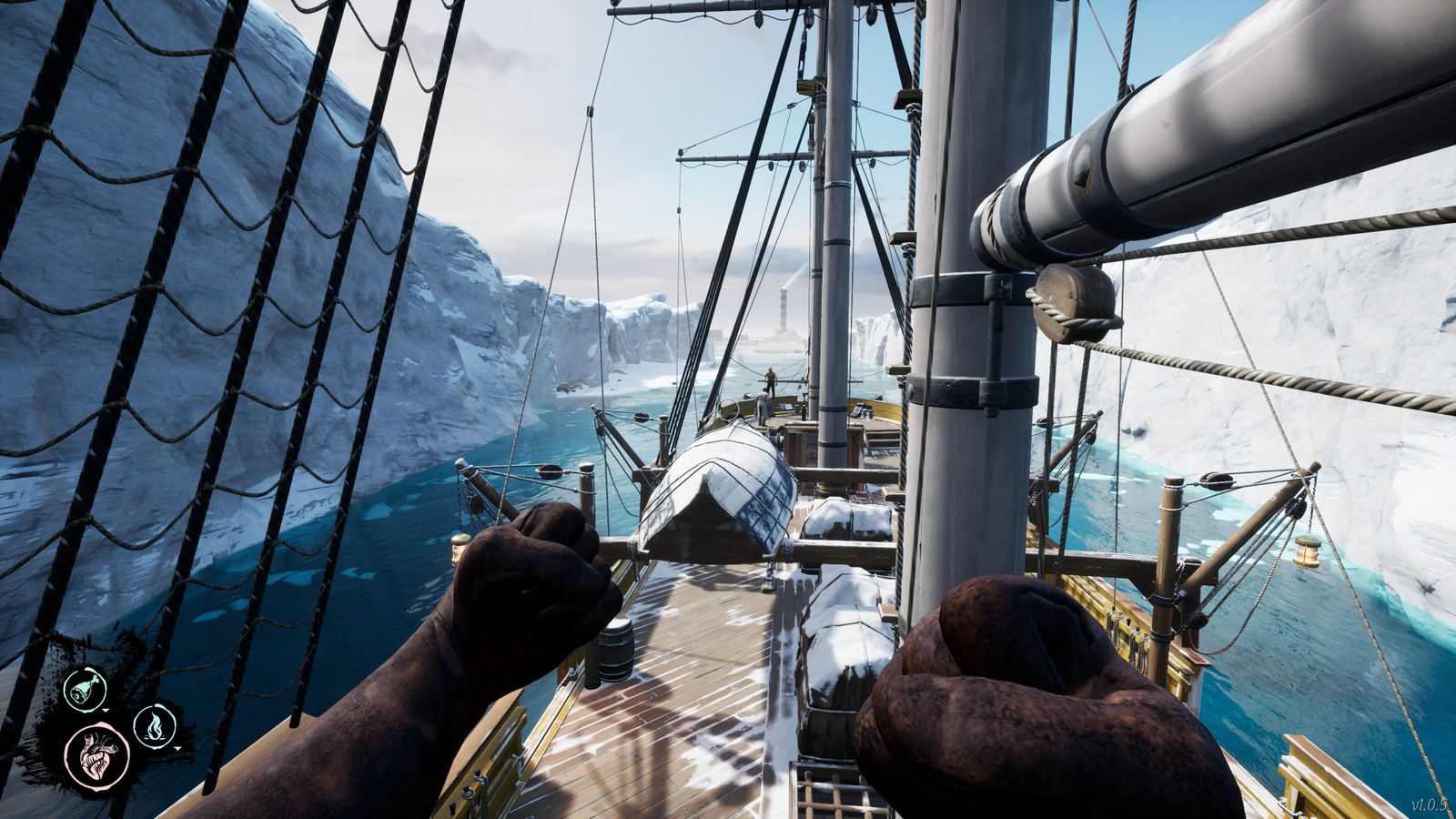 And that’s where my last problem lies – what even is your purpose in this game? Game and game-modes in this Player-Imposter genre get old quickly because of how repetitive the content gets. When there’s an overarching purpose for your place between the icy walls of this game, be it through quests or uncovering the story, there exists a reason to keep playing for hours on end. And when games go from 30 minutes or longer, it’ll have you thinking “do I really have the time and patience for this?”.

Dread Hunger isn’t a game that I think you should buy at full price, at least not in its current state. With a lack of story and player-purpose, it feels like the game is still in beta — and yet, here we are, at full release. The player-base may dry up before the game really, and truly, reaches its full potential. It’s such a shame, because, for what the game does do right it does quite well.

While Dread Hunger aims to freshen up a rather burnt-out genre due to the likes of TTT and Among us, there isn’t enough reason to keep playing over and over again. Roleplaying is moreso encouraged than required, causing games to get repetitive quickly. Not only that, but the lack of story leaves this game ending on a disappointing note, especially since it immediately promises that it will play a key role throughout the experience.

With a deep interest in writing, Ben followed that into a Journalism degree. As an avid lover for gaming, he is constantly expanding his library with console, PC, and VR games. He's obsessed with stealth games and loves hunting down the smallest of details inserted by devs.
Related Articles: Dread Hunger
Share
Tweet
Share
Submit